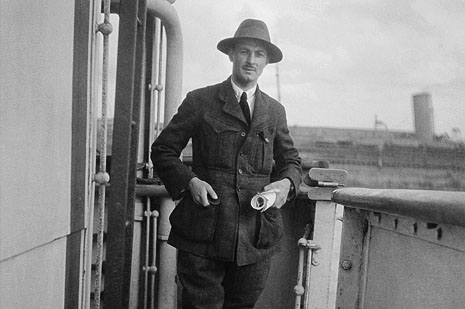 At dawn on 1 November 1914, HMAT Orvieto, flagship of the First AIF convoy, embarked from Albany to begin the long voyage to the desert training camps of Egypt and the carnage that lay in wait in the Dardanelles and on the Western Front. Aboard was a twenty-four-year-old reporter on special assignment for the Age.

“The coast faded to a dim blue, more distant once the sun rose over the hills, but soon vanished over the swelling horizon,” he wrote of that moment. “It was the last link with the homeland, and who knew how many would see those shores again.”

Unlike thousands of the men he followed to the camps at Mena, in the shadows of the pyramids, and into the trenches at Gallipoli, Phillip Schuler would return briefly to his home in Lisson Grove, Hawthorn. But by June 1917 he, too, would be dead – cut to pieces by a stray salvo on a battlefield in Belgium.

Yet between the stirring departure from Albany and the horrors of Flanders, Schuler was to assemble an extraordinary body of work in words and pictures that would distinguish him as one of the greatest Australian war correspondents.

Four journalists were to play leading roles in forming the indelible legend of Gallipoli in the minds of Australians. Yet it was probably the one who remains least-known today – Phillip Schuler – whose role was the most immediately profound.

Ellis Ashmead-Bartlett, the brash veteran correspondent for London’s Daily Telegraph, was the first to extol the dash and daring of the Anzac troops in his dispatches after 25 April 1915.

Keith Murdoch, the later Australian newspaper proprietor and sire of a global media dynasty, stopped briefly at Gallipoli, never got around to filing a story from the front and tried to smuggle an explosive letter from Ashmead-Bartlett to the British cabinet accusing commanders of blundering the campaign. (The original letter was confiscated by military police. Murdoch’s fabled “Gallipoli Letter” was a rehash of Ashmead-Bartlett’s work, recklessly embellished and riddled with errors.)

Charles Bean, the meticulous diarist who also came ashore with the first troops on 25 April, stayed throughout the doomed campaign and went on to devote his life to writing the epic official history of the war.

But it was Schuler’s evocative and compassionate dispatches from Gallipoli that most eloquently captured the horror and the heroism for Australian newspaper readers, and it was those dispatches that first revealed the scandalous neglect and mistreatment of wounded Australian soldiers during the early weeks. It was Schuler’s 1916 book, Australia in Arms, that gave the first full account of Australia’s role in the Dardanelles campaign. And it was Schuler the amateur photographer whose hundreds of images from Egypt and Gallipoli remain our most precious pictorial archive of the era.

To mark the centenary of Anzac, Penguin has republished a series of Australian first world war classics, including Australia in Arms. Irritatingly, the paperback edition changes the author’s name (he wrote as Phillip F.E. Schuler) and ditches all the maps and illustrations, the index and the appendix of gallantry awards to Australians at Gallipoli, which were all part of T. Fisher Unwin’s first edition. But given the Penguin reprint retails for $9.95 and scarce copies of the original edition have been fetching as much as $200 in recent years, the abridgment is a reasonable price to pay for a new generation to gain access to this important work.

Almost a century after it first appeared, Australia in Arms remains a remarkably fresh, compelling and dispassionate account of Australia’s role in the nine-month Dardanelles campaign. Like most contemporary correspondents, Schuler was deeply affected by the spirit and sacrifice of the first Anzacs. And he was perhaps the first to forecast the abiding impact the campaign would have on successive generations of Australians. “In one day – 25th April – Australia attained nationhood by the heroism of her noble sons,” he wrote just weeks after the last troops were evacuated. “Anzac will ever form the front page in her history.”

Unlike others, particularly Ashmead-Bartlett and Murdoch, Schuler retained respect and admiration for the British and Australian commanders at Gallipoli and was convinced the campaign was lost not because of any great failure of field leadership or strategy, but because of “the lack of men, the lack of reinforcement, the lack of munitions.”

And while Schuler was deeply impressed by the Australian troops he worked alongside over many months, he was often equally impressed by the bravery and sacrifice of the Turks. Describing a Turkish assault at the Nek – a few weeks before the suicidal charges there by Australian light horsemen – he wrote: “The Turks showed a desperate courage; for this attack on the Nek was but sending troops to certain destruction; yet the men never flinched.”

Unlike Bean, who won a journalists’ union ballot to be Australia’s sole official war correspondent, Schuler got to Gallipoli via the back door. Unable to cover the first landings, he eventually persuaded British commander General Sir Ian Hamilton, whom he had befriended during Hamilton’s inspection tour of Australian forces in early 1914, to bend the rules. “Although I was exceeding my powers, I gladly gave him his permit,” Hamilton wrote in his diary, saying how impressed he was with Schuler.

Arriving at Anzac Cove on 20 July, Schuler was soon reunited with Bean, with whom he had become friends aboard the Orvieto. When Bean was wounded and refused evacuation, Schuler nursed him in the dugout they shared.

Within days, Schuler was caught up in the carnage of the August offensives, including the battle of Lone Pine and the charge at the Nek. His account of that murderous few minutes stands among the finest pieces of war reporting. He is believed to have been the first journalist to record the extraordinary moment when Lieutenant-Colonel Alexander White prepared to lead the soldiers of his 8th Light Horse into the barrage of Turkish machine guns with the fateful words: “Men, you have ten minutes to live.”

As the Dardanelles campaign drifted towards evacuation in December 1915, Schuler returned to Australia to work on the book his anxious family hoped would be the end of his wartime adventures. But in early April 1916, to the consternation of his father, with whom he had a difficult relationship, Schuler enlisted in the army. Driven by a desire to share the sacrifices of the men he had so keenly felt at Gallipoli, he refused a commission and took a job as a driver with Monash’s 4th Division. Within little more than a year of his enlistment, he was dead, just days short of his twenty-eighth birthday.

In June 1917, soon after the Battle of Messines, in which Schuler had been noted for his bravery, he was severely wounded. With injuries to his left arm, right leg, face and throat, he died a few days later in an army hospital in northern France.

Just before he died, Schuler was visited by Colonel Richard Dowse, his former commanding officer. Dowse later wrote to Bean: “His head was all bandaged up but he had use of one eye and when he saw me remarked, ‘Dick, well I ask you,’ a favourite saying of his. He knew he was for it and gave me a few messages and instructions before I left. He died about an hour later.”

Dowse wrote immediately to Hamilton, who replied: “I am quite upset myself to think that a man who had such a future before him; who possessed such a delightful personality and who would certainly have made a name for himself by his writings in the future has prematurely dropped out.”

In the two years between his arrival at Gallipoli and his death, Schuler developed a close, almost father–son relationship with Hamilton. The two men wrote regularly to one another. Believing Hamilton’s heroic military career had been unfairly sullied by the critics of the defeat at Gallipoli – not least Keith Murdoch – Schuler had sought but was refused leave to give evidence in 1917 at the Dardanelles Commission investigating the failed campaign.

After Schuler’s death, Hamilton wrote to his father, Frederick Schuler: “Had my last recommendations that he should attend [the Commission] borne fruit, it is improbable that he would have been exactly where he was on that fateful day. On the other hand, ‘Fate’s hid ends eyes cannot see.’” •

Mark Baker is CEO of the Melbourne Press Club and a former senior editor and correspondent with Fairfax. He is writing a biography of Phillip Schuler to be published by Allen & Unwin.