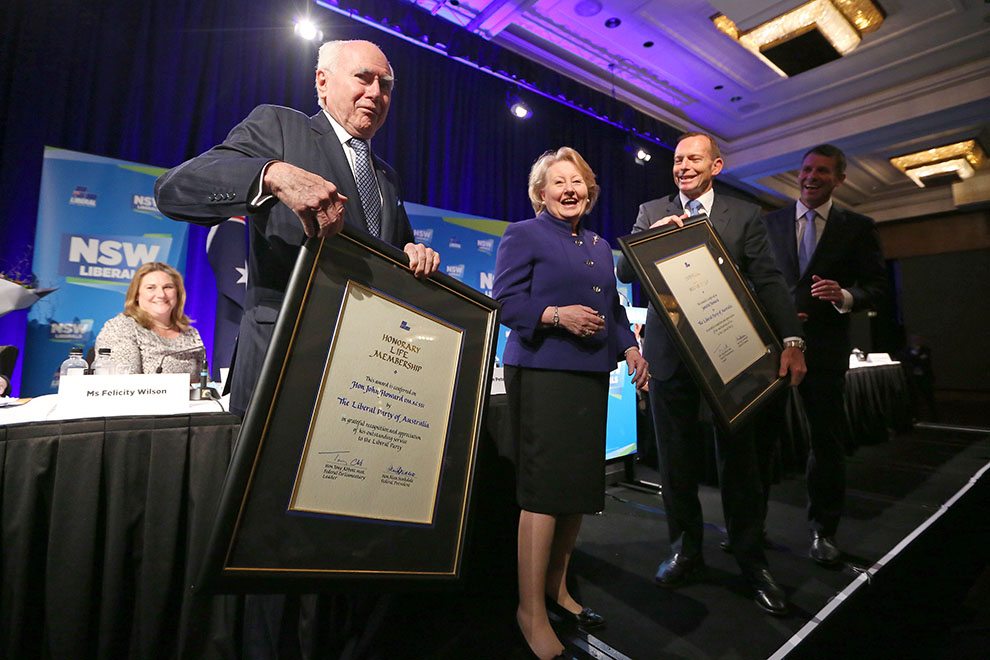 One of the enduring myths of Australian politics is that only the Labor Party has factions, and the unhealthy tribalism that often goes with them. Wrong: the Liberal Party is just as factional, albeit in a looser sense, and just as tribal, if not more so.

Labor’s best-known faction, the NSW Right, has passed into folklore as a ruthless (yet sometimes dazzlingly inept) political machine – a cross between Tammany Hall and the Mafia. But the same state’s Liberal right wing (itself made up of sub-factions) flies under the radar, except when its excesses occasionally hit the headlines. It is a formidable, if occasionally unpredictable, influence on the Abbott government, anchoring it firmly to the right.

With the possible exception of the party’s permanently cleaved branch in South Australia, no other part of the Liberal family is so engaged in seemingly endless civil war as the NSW branch. Because of its size, its machinations inevitably have consequences beyond the state. And it is as obsessively tribal as any political clan.

In many ways, the NSW branch is the odd one out in the conservative constellation, its history different from that of its conservative allies elsewhere. Its path of evolution, owing in part to the dominance of free traders in nineteenth-century New South Wales, has been shaped more recently by its long years out of office in a natural Labor state. The experience of opposition has fostered an intensely tribal “outgroup” mentality, with tendencies towards extremism. The closest thing Australia has had to a quasi-fascist movement was the New Guard, a NSW-based organisation with deep roots in Sydney’s business and military establishment in the 1930s.

In Victoria, where it was an integral part of the establishment, the Liberal Party was more electorally successful. It was here that the Deakinite strain of liberalism emerged, resulting in far-reaching changes to factory laws, the world’s first minimum wage, and other progressive reforms. Tariff protection, with benefits for manufacturer and worker alike, was an integral part of the package.

This social compact was never wholly accepted in New South Wales. The old free-trade ideological strands of George Reid, a one-time NSW premier who was prime minister in 1904–05, never entirely vanished from Australian liberalism, despite the adoption of trade protection in the first decade after Federation.

New South Wales was the most reluctant of the states to come on board when Robert Menzies, a Victorian, sought to merge various conservative and anti-Labor groups into a new Liberal Party in the mid 1940s. In New South Wales, not only were its conservative fragments more politically diverse than elsewhere, but there was also a broad antipathy towards Menzies, as popularised in the slogan “You’ll never win with Menzies.” History proved that to be one of the more spectacular misjudgements in Australian political history.

Even after Menzies swept to a resounding victory in 1949, it was soon evident that a free-trade “cave” existed within the new government’s ranks, its members drawn exclusively from New South Wales. This group opposed Menzies’s acceptance of the mixed economy, as manifested, for example, in the two-airline policy, which protected the duopoly of the government-owned Trans Australian Airlines and the privately owned Ansett.

New South Wales continued to be isolated within the party during the seemingly united Menzies years. With the elevation of another Victorian, heir apparent Harold Holt, to the deputy leadership in 1956, the NSW “cave” was effectively marginalised. Evidence of an ongoing anti-NSW sentiment in the wider party can be found in a remark by longtime Menzies minister Sir Alexander Downer (father of the Howard-era minister, also Alexander), who went to London as high commissioner in 1964 but kept a close watch on developments in Australia. When John Gorton’s prime ministership was faltering, a young Liberal MP, Neil Brown, found himself in London being interrogated by Downer. “You must promise me one thing, Mr Brown. Never let the prime ministership fall into vulgar, Sydney commercial hands.”

In 1971, though, a party-room coup by Billy McMahon toppled prime minister John Gorton and the Victorians lost control of the party. The leadership returned to Victoria during Malcolm Fraser’s years, but in the thirty years since 1985 a Sydneysider has led the Liberal Party for all but two years. (The sole exceptions were Andrew Peacock, 1989–90, and Alexander Downer for eight months during 1994–95.) In that time, first John Howard and then Tony Abbott have reshaped the party in ways that would have delighted George Reid but dismayed Downer senior. They have also significantly increased the influence of the NSW branch.

With John Howard’s ascension to the national leadership, the insular, tribal character of NSW conservatism was brought to the broader Liberal Party; and that shift has persisted to this day, with little sign of weakening. Howard’s worldview was profoundly shaped by his experiences growing up in a state where Labor held power for an unbroken span of almost a quarter of a century. Labor had influence not just in the NSW government, which it ran with the trade unions, but also through extensive webs of patronage in local government, the churches, the legal profession, the judiciary and business. For Howard, it was the enemy, pure and simple, and it had to be defeated; it was not just a political opponent, its very culture was toxic and needed to be eliminated from the body politic and public life in general. Labor, in Howard’s view, looked after its own, and his side would do the same.

Opposing Labor, in a tribal sense, means not resembling Labor in any way. The Liberal factions are also tribal in a very real sense: you are either in or out. The basic argument, little changed down the years, is that the moderates believe the right makes the party unelectable because “soft” Labor voters need to be won over, whereas the right, in its various sub-tribes, views any accommodation with Labor-style policies with deep suspicion, and as akin to apostasy. Elements of this fundamentalist rhetoric pepper Tony Abbott’s utterances, especially in regard to security issues.

Interestingly, self-styled conservatives, or those strongly identified with the right, have been conspicuously absent from leadership of the state party in New South Wales, which has usually come to power after periods of Labor misrule. Bob Askin in 1965, Nick Greiner in 1988 (and his successor John Fahey) and Barry O’Farrell in 2011 were all moderates. So too is Mike Baird, the current incumbent, but he owes his elevation to the right’s decision to block Gladys Berejiklian, who was not just a moderate but also a factional warrior. Baird has since sought to distance himself from the right, having dumped two factional heavies from his cabinet.

The NSW branch exerts a powerful hold over the Abbott government. Speaker Bronwyn Bishop, a former NSW Liberal branch president, is as tribal as they come and scarcely bothers to conceal her disdain for those on the other side of the chamber, whom she regularly ejects. As one Labor MP said to me, “This is not political. It is visceral. She hates us and everything we stand for.” Scott Morrison, a former NSW state director once surprisingly regarded as a moderate, is the architect of the hardline stance against asylum seekers. And of course there is the prime minister himself, rigorously hardline against anything even mildly progressive, be it renewable energy or same-sex marriage.

Behind the frontlines are the redoubtable conservative senator, Concetta Fierravanti-Wells, the most influential activist of the Christian right (Cory Bernardi notwithstanding), and another former NSW Liberal president, Bill Heffernan, who is reputed to be very persuasive among Liberals, especially newcomers.

The NSW far right, though subject to frequent splits and realignments, is represented by the Member for Mitchell, Alex Hawke, whose extreme views on a range of topics led shock jock and Liberal supporter Alan Jones to memorably refer to him as “a cancer on the Liberal Party.” In 2005 Hawke nailed his conservative colours to the mast, claiming, “Nobody joins the Liberal Party to be left-wing. If you stand for compulsory student unionism, drug-injecting rooms and lowering the [homosexual] age of consent, you can choose the Greens, Labor or the Democrats.” Similar sentiments in his maiden speech, after he entered parliament in 2007, drew effusive praise from Tony Abbott

Conservative in one sense, this faction is also constantly looking to expand its power. At the moment, the NSW right is working on a plan, drawn up by a panel headed by John Howard, for a “plebiscite model” of direct election of Liberal preselection candidates in the House of Representatives and the state Legislative Assembly. The proposed model would effectively limit the power of the NSW Liberal state executive, where the right lacks a majority, to override the wishes of branch members to install candidates.

The move masquerades as grassroots democracy, but in fact panders to branch stacking, interest-group capture and local populism. It has implications far beyond New South Wales and could once again refashion the Liberal Party. •

Norman Abjorensen is a Visiting Fellow in the Policy and Governance Program at the Crawford School of Public Policy at the ANU. He is the author of three books on the Liberal Party and its leaders. His book on prime ministerial exits, The Manner of Their Going, will be published later this year. 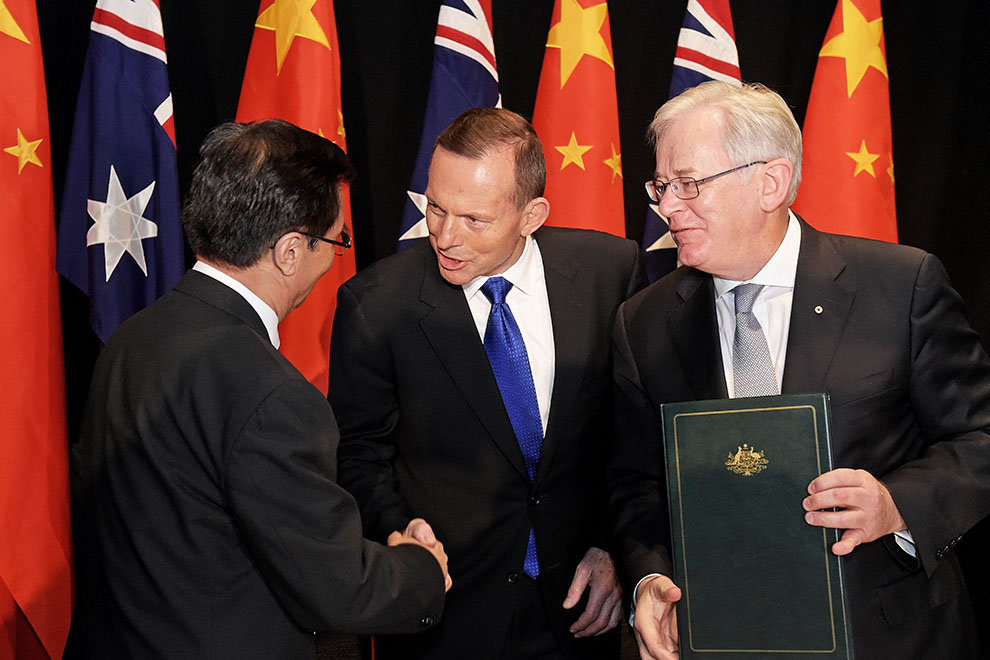