The lost world of the mayaroo

Books | By recovering the forgotten history of the long-haired rat, Tim Bonyhady has produced a book for our times 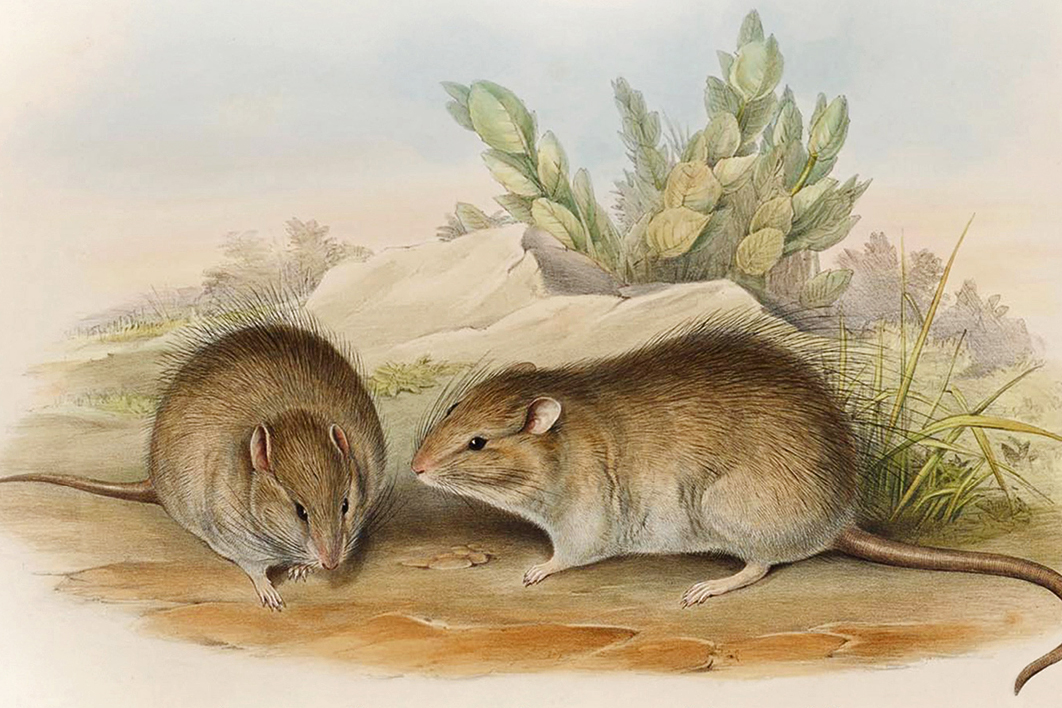 Vulnerable but not endangered: the earliest known image of the long-haired rat, from John Gould’s Mammals of Australia, published in London in 1854.

The Enchantment of the Long-haired Rat: A Rodent History of Australia
By Tim Bonyhady | Text Publishing | $38 | 304 pages

The map at the beginning of this book foreshadows that this is no ordinary work of Australian history. A reader will seek the capital cities in vain, the only labelled coastal features being Townsville and a few places in Western Australia. The focus is on the interior of the eastern half of the continent, with the Diamantina and Bulloo Rivers and towns including Boulia, Birdsville, Silverton and Lake Killalpaninna given unaccustomed attention. This is the world of the mayaroo, also known as Rattus villosissimus, or the long-haired rat.

As someone with an idea for a book that’s been a long time coming, I was pleased to discover in the extensive list of Tim Bonyhady’s publications (which effortlessly cross and combine the fields of art history, environmental history and law) an article on the long-haired rat in Overland in 1992. Like the real-life rats of the past, the idea of the long-haired rat has clearly lingered, and after a long gestation has produced this delightful exploration of the teeming lives and dramatic deaths of members of a generally overlooked Australian species.

Bonyhady’s intention is to recover the long-haired rat’s lost world — its country, the animals around it and its place in human lives — from the time it entered written records in the 1840s to the present. Climate variation plays a central role: Bonyhady correlates the rat’s periodic irruptions with what have subsequently been identified as La Niña years. As pastoralists celebrated the arrival of flood waters from the northeast, so too did long-haired rats, emerging from their refuges around permanent water sources to follow new food supplies and bountifully reproduce along the way.

In narrating a series of floods and their aftermaths, Bonyhady draws on a surprisingly rich selection of evidence left by explorers, naturalists, pastoralists, missionaries, flying doctors, travellers and people sharing their experiences of rat plagues through local newspapers. Very few of them had gone in search of the long-haired rat, but when their paths crossed, it could hardly be ignored.

Many of the sources, including the papers of Burke and Wills and other well-known expeditions, and of their rescue parties, had to be carefully sifted for a comment here and an observation there. The more prolific writers include Kenric H. Bennett, the station manager and frustrated scientist who never quite reached the level of respect and authority he so wanted, and Hedley H. Finlayson, who lost a hand and much of his sight in a laboratory accident but still managed to be one of the leading natural history collectors of the 1930s.

Although the book necessarily draws mainly on published sources, Bonyhady also listens carefully for Indigenous voices, with their distinctive understanding of the species. Long-haired rats were totem animals and part of Dreaming stories, being integrated into the landscape in places like Maiurru Mitha Vambata (“dirt dug out of a hole by rat,” in the Adnyamathanha language) in the Flinders Ranges, renamed Mount Hopeless by Edward Eyre.

The Indigenous group whose relationship with the rat is most fully explored is the Diyari of the Lake Eyre region, drawing on ethnographic work by German missionary Johann Reuther, who lived among them from the 1860s. The “enchantment” of the book’s title refers to the Diyari’s singing to rats, both to entice them from their burrows when hunting and, malevolently, to inflict stress and hardship on other humans by sending the rats home, ending a period of abundance.

In contrast to the welcome given to long-haired rats by Indigenous peoples, settler colonists carried prejudices against them. Indeed, Bonyhady argues that the mere fact they were designated as rats was an “obstacle to sympathy,” with those species so named being more likely than other Australian mammals to become extinct. He reports that fifteen species of native rat have died out since the arrival of Europeans.

Sudden encounters with waves of rats that seemed to rise out of the earth itself, principally at night, triggered classic disgust responses that were heightened by the practical damage they did. Mid irruption, little of organic origin was safe: garden crops, pasturage, plant roots, the bark of trees, stored food, harnesses, boots, even the wooden handles of tools. Rats were blamed for undermining fences and roads, killing and eating lambs, and even igniting bushfires by gnawing wax-tipped matches. While some of these accounts seem exaggerated, Bonyhady has been cautious with the evidence and critiques those that become hyperbolic.

Although it does not discuss the concept explicitly, The Enchantment of the Long-haired Rat is also an exemplary study of animal agency. The rat’s irruptions disrupted the tenuously balanced systems settler colonists were attempting to put in place, and increased the numbers and impact of other outsider animals, native and introduced. The letter-winged kite is given particular attention as a specialised hunter of long-haired rats that became nocturnal in pursuit of its prey. Bonyhady uses this anomaly — most kites being daytime hunters — to trace the tensions between the uncredentialled naturalists who observed and reported on this behaviour and the unbelieving museum-based experts.

The kite wasn’t alone. Dingoes, foxes, cats, snakes (notably the inland taipan), goannas and even fish profited from the surplus of rats, with catfish and golden perch found to have eaten them as they swam across swollen waterways. When the irruptions subsided, these predators faced crises that could take them far from their usual territory or lead to their preying on novel species, amplifying the impact of the rats.

Interspecies relations were further complicated by the deliberate introduction of rat predators. In the 1880s, landholders sought large numbers of domestic cats from coastal cities and also, in a truly breathtaking move, imported hundreds of “native cats,” now known as quolls, from the central west of New South Wales to the Riverina. Even at the time, these measures were decried as not only unlikely to make much impact on the rats but also certain to harm birdlife when the irruption subsided.

While irruptions of long-haired rats have continued into the twenty-first century, Bonyhady demonstrates that their scale — both numerical and geographical — has been in decline since 1888. He concludes that even this furry embodiment of the Australian boom-and-bust cycle is not immune to the effects of commercial agriculture, climate change and the displacement of Indigenous land-management practices. Speaking to the importance of such historical studies for forming a baseline for current scientific understandings, he notes how the authors of a 1981 guide to Australian rodents that concluded long-haired rats were resilient in the face of colonisation assumed that the rat reached its greatest range in 1975, unaware of the vast territory covered in the 1880s.

Although vulnerable both to the droughts and intense rain that will increasingly characterise Australia, the long-haired rat is not considered to be endangered. Bonyhady’s ringing message is that all of the interconnected animals of the fragile Australian continent must be cherished, not only those judged to be charismatic or useful. For this and other reasons, The Enchantment of the Long-haired Rat is an important book for our times. •

Nancy Cushing is an Associate Professor in History at the University of Newcastle.