The meaning of John Howard 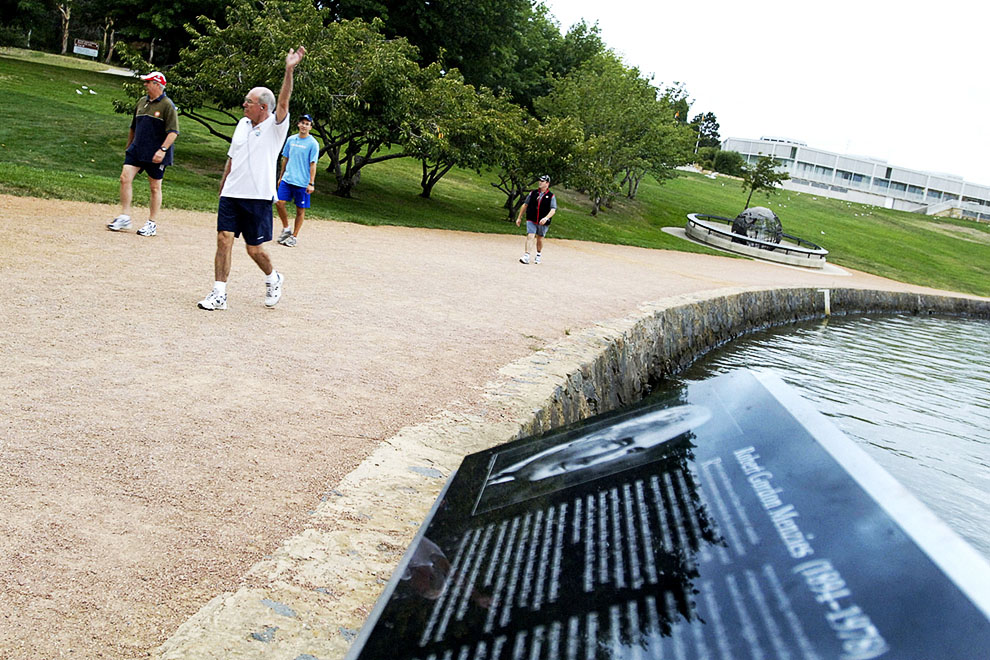 One day, late in his prime ministership, a media release came out of John Howard’s office drawing attention to an otherwise unnoticed statistic. For the very first time the number of self-employed people in Australia had exceeded the number of trade union members. It meant little to most people, but for Howard it was of primary importance: his constituency (as he saw it) was in the ascendant, his enemies in retreat.

The total number of union members plunged from 2.19 million in 1996 to 1.69 million in 2007 – a fall from 31.1 per cent of the workforce to just 18.9 per cent. Conversely, the number of the self-employed grew from 1.67 million in 1998 to 2.03 million in 2008. While Howard and his supporters delighted in the collapse of union membership, interpreting it as evidence of a seismic shift in popular values, in reality they were reaping the political benefit of forces unleashed by one of Howard’s predecessors, Bob Hawke. By relaxing controls over the economy, Hawke’s government unleashed industrial restructuring, forced union amalgamations and a greater militancy on the part of employers now forced to become more competitive.

Twenty years after the election of Howard’s first government and more than eight years since his departure, we are still pondering the significance of Australia’s second-longest prime ministership. Arguments over the period will no doubt continue – and it is still far too early to make a fully informed historical assessment – but what is certain is that John Winston Howard, twenty-fifth prime minister of Australia, was one of very few holders of that office who could be classed as transformational. The Australia when he departed in 2007 was very different from the Australia that handed him government in 1996.

So great was the unpopularity of Hawke’s successor, Paul Keating, that Howard didn’t have to do much to win government. Taking a cue from Jeff Kennett’s in Victoria four years earlier, his election strategy was to present as small a target as possible – as a consequence, much of what followed took a surprised Australia into uncharted waters.

To be sure, there were gathering undercurrents that made the political landscape as uncertain as it was volatile, and Howard showed his political astuteness in seeking to turn them to his advantage. He remained ominously silent when Pauline Hanson gave voice to a savage attack on the Australian notion of a fair go, for instance. Rather than repudiate her assault on welfare recipients and Indigenous Australians, he bought time to gather her supporters into his own embrace. Hanson’s words from her maiden speech, “I should have the right to have a say in who comes into my country,” became Howard’s in his 2001 statement on asylum seekers: “We will decide who comes to this country and the circumstances in which they come.”

No leader before Howard played the cultural warrior with such ferocity. He challenged the left-liberal narrative of democratic progress, with its ties to the egalitarianism celebrated by Henry Lawson and its distinctive variety of collective ethos; in its place he fashioned a counter-narrative that turned powerful symbolic concepts like Anzac and mateship into a new, individualistic public nationalism. Australians, he argued, had every right to feel “relaxed and comfortable” about the past; glossing over colonial dispossession, he chided those who criticised figures unable to answer back and insisted Australia’s story was one of heroic achievement. Howard’s exaltation of Anzac and all things military was no mere rhetorical flourish; it led directly to his decision to commit Australian forces to two senseless foreign wars.

Australia’s relatively high turnover of prime ministers means that very few have been able to stamp themselves on the nation. Bob Menzies, a record sixteen years in office (1949–66), might have won elections, presided over the long postwar economic boom and, to his eternal credit, greatly expanded tertiary education, but Australia was little changed socially and structurally. In that sense, Menzies was not a transformational leader.

Gough Whitlam, for all the flaws of his government’s handling of the economy, can be seen as mildly transformational. He brought a sense, for the first time, of what enlightened social democracy can do, dragging the nation into the late twentieth century, not least in healthcare and social security, progress towards gender equality and education. The introduction of no-fault divorce laws is just one example of a reform that did much to rid us of a painful, costly and archaic system that was riddled with hypocrisy.

The one clear example of transformational leadership is Bob Hawke, elected in 1983. The economic liberalisation which his government presided over and drove reshaped the country like no other government’s policies had.

To understand John Howard, we need to understand what drove him in politics – and it is hard to avoid the centrality of industrial relations, the issue that also brought him undone.

Howard was just two years old in 1941 when the Labor Party regained office in New South Wales after the disastrous Lang years; he would be twenty-six by the time the conservatives found their way back into government in his home state. His formative years had all been spent not just under a state Labor government, but also under what he came to see as a culture shaped by Labor values, influence and patronage – all things alien and even hostile to the individualistic, small business, suburban world in which he grew up and whose ethos he adopted unquestioningly.

And behind this loathsome Labor Party was its source of funds, and in most cases its candidate seed bed – the trade unions. To defeat Labor and curb the unions was a lifelong obsession for John Howard; it was not enough for his side of politics to just win elections, the whole Labor apparatus had to be dismantled. And in policy terms this translated into a radical restructuring of the longstanding industrial awards and arbitration system derived largely from Labor initiatives.

Words had to be transformed into blows if the Labor foe was to be truly vanquished, and the vagaries of electoral fortunes opened an unexpected window of opportunity in 2004, when the Coalition gained a majority in the Senate for the first time since 1980. Conscious of the perception in the Liberal Party that Malcolm Fraser had squandered his large majorities in not pushing through major structural reforms, Howard was determined not to expose himself to similar charges.

But what he saw looming as the pinnacle of his career was but a mirage; it was his Waterloo. He had unwisely overestimated his power and fatefully underestimated the forces arrayed against him. He had over-reached in his dogged and obsessive preoccupation with the doomed policy of WorkChoices.

But there is more to this than a focus on industrial relations, and the broader ideological context sheds further light on the meaning of Howard. His agenda was not just about weakening the Labor Party by seeking to starve it of union funds; it was about a far bigger picture. Even demolishing the unions and their power was not an end in itself: it was an attack on the collective ethos of Australia.

In the wake of a series of privatisations at both state and federal levels, especially of Telstra, the railways and electricity generators, former employees became contractors. Many of these would have been union members and, quite likely, Labor voters. But when they were forced by circumstance to see life from an individual self-interest perspective rather than from a collective social perspective, much changed.

The result? The age-old pressure for redistributive policies – essentially the unspoken argument in every budget – was reduced; taxes became not a social necessity but a burden. The traditional regard for the underdog all but vanished; sympathy gave way to indifference or, even worse, contempt.

This shift, with the electoral support of the new blue-collar cohort dubbed “Howard’s battlers,” was reflected in the general thrust of his government’s legislation. Welfare was made less easily accessible and subject to more conditions, with tougher penalties imposed for compliance failures (including no payment for up to eight weeks). The harsh new regime extended also to many sole parents and people with disabilities, who were forced to look for part-time, low-skilled work.

Economist Fred Argy has written that Howard’s WorkChoices and welfare-to-work agenda represented a fundamental break with the past. By markedly clawing back collective bargaining (even when nearly 100 per cent of employees wanted it), by greatly increasing managerial autonomy, by transforming what was an indirect power to make labour laws (through an independent arbiter) into a direct power under the control of the government, by completely disempowering many workers, and by fundamentally redefining the right to welfare – through all these measures, Howard took a big step towards (and even in some respects beyond) the US social model and retreated much further from Australia’s consensus-based “wage-earners welfare state.”

With a narrowing of unfair dismissal rules in favour of the employer, employees were also confronted with the fear of losing eligibility for welfare benefits if they were retrenched, thus making it more difficult for employed workers to leave unsatisfactory jobs.

Howard was mindful of his new constituency, funding a raft of subsidies and concessions to newly independent tradespeople. Spending on TAFE increased while spending on schools, and especially universities, fell to near the bottom among OECD countries.

At the close of the Howard era, the remaining vestiges of old Australia were rapidly receding into the past. Australia had become more unequal, more militaristic, more materialistic. Household debt levels exploded during the eleven years of Howard, bringing new financial stresses to an already hard-pressed mortgage belt. The illusion of prosperity – enjoyed and flaunted by the “Howard battlers,” the new middle class – was actually a pea-and-thimble trick. This extra demand (spending) by the household sector meant that the federal government was able to run bigger surpluses, without adversely affecting overall demand in the economy.

In his 2008 book The Land of Plenty: Australia in the 2000s, Mark Davis discerned an underlying anxiety:

Why does so much of the present sense of prosperity rely upon the availability of cheap consumer goods and credit, and not deep, lasting economic security, proper time to unwind, freedom from the worries of work and health, affordable and easily available housing, accessible high-quality care and education for children, the sense of living in a safe, socially integrated society, or any of the other benefits that true national prosperity should bring?

By 2007, we were in a world more uncertain than that of 1996. Howard’s political and cultural crusades had opened up social divisions; his rule divided people (unlike that other transformational leader, Bob Hawke, who worked on consensus).

Australia had changed, and not necessarily for the better. By the time the voters of Bennelong dispatched Howard, Australia had seen dogs attacking workers on the waterfront, an erosion of sympathy for the disadvantaged, the rise of a new militarism, the incorporation of Hansonism into political discourse, and the shameful episodes of the Tampa and the “children overboard” affair.

John Howard had left his mark. •

Norman Abjorensen is the author of John Howard and the Conservative Tradition (2008). His most recent book is The Manner of Their Going: Prime Ministerial Exits from Lyne to Abbott (2015).