Craig Kelly is just the latest hardline conservative to cause trouble within the Liberal Party, and he’s unlikely to be the last 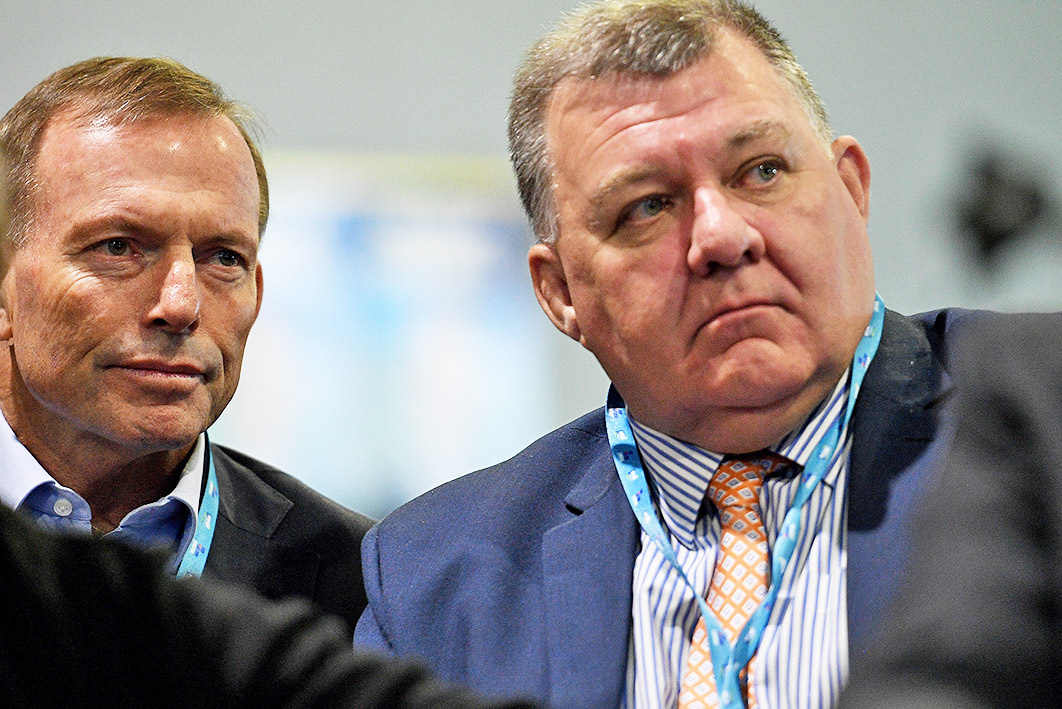 It’s approaching lunchtime in Sutherland, a southern suburb of Sydney, where Craig Kelly, the Liberal member for the federal seat of Hughes, has his electoral office. There are shades of old Australia here: a 1930s hotel with its original cream and black tiles; a two-storey bank building from the same era that still hosts a bank. You can buy a two-bedroom apartment for just over half a million dollars, and a four-bedroom house for just over a million, about half their equivalent prices closer to the city. Cafes are doing good business, and the Indian, Chinese and Korean restaurants are getting ready to open.

After one of the most turbulent weeks of his political career, though, there is no sign of the embattled Kelly. A large picture of the four-term MP stares out from his office window against an image of the Australian flag in which the Union Jack seems the most striking symbol. Blinds to the street are drawn, and the office looks closed.

“One thing about the Liberals is they don’t have long memories,” says Ian Hancock, historian of the party’s NSW division, when I ask him later about the implications of the rumoured challenge to Kelly’s preselection. “But a long memory in the Liberal Party comes into play when things are going badly.”

For the seat of Hughes, that would be about now.

An outspoken climate change sceptic from the party’s right, Kelly has troubled Scott Morrison’s government even more over his social media campaign against its Covid-19 strategy. The drama came to a head on 3 February when Labor’s Tanya Plibersek confronted Kelly in a Parliament House corridor and accused him of spreading “crazy conspiracy theories.” As a bevy of cameras recorded their confrontation, Plibersek reminded Kelly that her mother lived in his electorate, and declared she didn’t want her exposed to people who refused to be vaccinated because of Kelly’s campaign. So compelling was the encounter that the BBC ran the footage on its main news page.

It was only then that Morrison carpeted Kelly and told him to toe the government’s line. But the dispute kept mounting. On 12 February, Facebook was reported to have removed one of Kelly’s posts in which he opposed children wearing face masks during the pandemic.

The row has raised speculation that Kelly could face serious competition for preselection before the next federal election, which could take place as early as the second half of this year. Just days earlier Kevin Andrews, another seasoned Liberal right-winger, had lost preselection for his safe seat of Menzies in Melbourne. With the Liberal Party more polarised than ever, and the government holding a lower house majority of just three seats, questions are being asked about the likelihood of even more preselection clashes.

Ian Hancock doesn’t rule them out. And he argues that safe Liberal seats could be at more risk of challengers than marginals, at least based on trends from recent years. He cites a version of advice attributed to Enoch Powell, a former British Conservative politician. “For God’s sake win a marginal seat,” Powell once said. No one will challenge you while it stays marginal, and “you can then put your stamp on it and make it a safe seat.”

Over the past eight years, independents have captured two seats long considered impregnably safe Liberal: Indi in Victoria and Warringah in Sydney. After Zali Steggall defeated former prime minister Tony Abbott in Warringah in 2019, she put her stamp on the seat by campaigning strongly for action on climate change on behalf of voters fed up with Abbott’s climate denialism.

“These are the sorts of seat the Liberals won’t lose to Labor but to an independent who’s got presence in the electorate,” says Hancock. “Warringah will now be hard for them to get back.” Simple arithmetic dictates that safe seats are more vulnerable because it’s often easier for an independent to get into second place before preferences are distributed.

Hancock sees two forces at play in Kevin Andrews’s preselection loss. Andrews had been the seat’s MP for thirty years, and some Victorian Liberals reckoned it was time for generational change. “This is a very strong thing in Liberal history,” says Hancock. “You don’t hold on to a safe seat if you’re going nowhere.” And enough Liberals saw Andrews as too conservative. He was remembered as the Howard-era immigration minister who cancelled the visa of Mohamed Haneef, an Indian-born doctor, whom Australian authorities had wrongly accused of being linked to a terrorist act in Britain. More recently, he was seen as a strong Abbott supporter.

In Hughes, variations of the forces of change in those other Liberal seats could now determine Craig Kelly’s fate. Hughes (named after former prime minister Billy Hughes) was once solidly Labor, until the transformation of tradies from employees to small businesspeople helped turn it Liberal in the mid 1990s.

The seat embraces the Royal National Park, south of Sydney, and adjoins Scott Morrison’s seat of Cook, facing Botany Bay, on its eastern side. Kelly, a former small businessman, has held Hughes since 2010. Moves were made to challenge him for preselection at the 2016 and 2019 elections, but Malcolm Turnbull and Scott Morrison, as respective prime ministers, intervened to stop them. Kelly won the 2019 election with almost 60 per cent of the two-party-preferred vote. That was before anyone had heard of Covid-19.

If Kelly faces another competitive bid to take his Liberal candidacy, the most likely challenger would be Kent Johns, who tried to win preselection at the last two elections. Johns has a broader political background than Kelly: once a Labor mayor of Rockdale City Council, he joined the Liberal Party when he was elected to Sutherland Shire Council, where he has been a member for seventeen years, including twice as mayor. He’s also a former vice-president of the NSW Liberal Party.

Johns is avoiding any limelight for now. But the local paper, the St George and Sutherland Shire Leader, says he’s “poised” for another preselection battle and his supporters “are confident he has the numbers to beat Mr Kelly.” Since the political explosion over Kelly’s Covid-19 crusade, three more potential preselection challengers have been reported. And an online community group, We Are Hughes, says it’s searching for an independent candidate to take on Kelly, using the electorates of Indi and Warringah as models. The group will highlight the popular complaint that Kelly seems to spend more time promoting himself and his views on social media and sympathetic radio and television shows than he does in his electorate.

“If a high-profile independent campaign does get under way in Hughes, then I predict Craig Kelly will not be the Liberal candidate,” ABC election analyst Antony Green recently tweeted. “The Liberal Party felt loyalty to support Tony Abbott in Warringah in 2019, but I doubt they will have the same view on Craig Kelly.”

A Liberal figure in Hughes takes a similar view of Kelly’s prospects if a preselection challenge happens: “Either a moderate will win or a right-winger will win. That right-winger won’t be Craig Kelly.”

Ian Hancock claims no specific feel for the twists and turns of Hughes. But from his broader perspective, he sees the responses among some Liberals to Kelly’s outlandish views as a sign that the party’s factions will play a key role in the future of Hughes.

In New South Wales, he says, the right faction revived under Bronwyn Bishop, a “factional player, a winner-take-all person” prominent during the Howard government, who herself fell victim to a preselection challenge in 2016. But that’s now changed: “The so-called moderates have come back in New South Wales. They’ve become better organised and they may want to get rid of Kelly.”

Indeed, Kelly’s views on climate and Covid-19 are so outside the mainstream that even Morrison may be too wary of the potential electoral damage to save him a second time. If so, Kent Johns could stand a chance. He’s considered a Liberal moderate, and supports a carbon-neutral economy by 2050.

To Hancock, though, another scenario is equally possible. “The factions could agree to do a deal before the election: leave Kelly in Hughes, and in return give the moderates another seat elsewhere,” he says. “The Liberals have learned from Labor to do these factional deals. I wouldn’t have thought Kelly’s days are done. It would be unwise, and a poor reading of Liberal history, to write him off. He’s a man who takes a stand on what he believes. Don’t forget that some Liberals like that.”

On one point, Hancock is pretty certain. “I’d expect any Hughes preselection contest to be held later rather than sooner,” he says. “It would be a case of ‘let’s get through this disaster and hold off for a while.’”

Hancock’s writing about the Liberals gives him a wide authority for such analysis. His biographies have covered the lives of party figures including John Gorton, a former prime minister; Tom Hughes, a former attorney-general in Gorton’s government and still, at ninety-seven, a respected legal figure; Nick Greiner, a former NSW premier; and Ainsley Gotto, Gorton’s former private secretary, who went on to a successful business career.

Hancock is working on yet another biography that will give him an even longer view of the workings of Australian conservative politics. His latest subject is Josiah Henry Symon, a father of Federation. “He arrived in Australia from Scotland in 1866 at the age of twenty with just two boxes of books,” says Hancock. “He went on to become a senator and a master criminal lawyer.” It’s a career that couldn’t be more different from that of the divisive member for Hughes. •

Robert Milliken is a Sydney-based journalist and author and a contributor to the Economist.