The Monday morning after

Can Democrats in the US Senate use the same techniques as their colleagues in the House to turn healthcare reforms into law, asks Lesley Russell 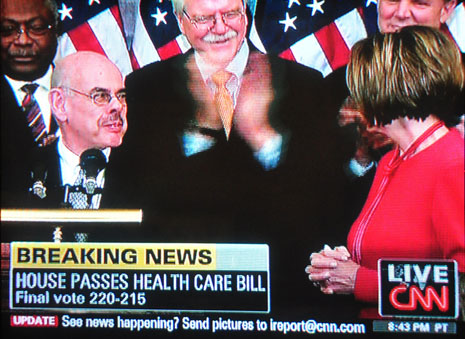 THE EUPHORIA from Saturday night’s historic vote for healthcare reform in the House of Representatives was harder to maintain in the face of Monday morning’s media coverage and the recognition of the long, nasty fight yet to come.

House Speaker Nancy Pelosi and her leadership team worked tirelessly to get this bill passed, ultimately by the narrow margin of 220 to 215 votes. They were forced to make a big concession to anti-abortion Democrats, and President Obama had to come down to the Capitol for a last-minute pep talk and some arm-twisting.

Now there is increasing pressure on the Senate to act quickly, with President Obama calling on senators to “take up the baton and bring this effort to the finish line.” But if it was tough for Speaker Pelosi, who could afford to lose thirty-nine members of her own caucus and still win passage of the bill, there is a tougher task in store for Senate Leader Harry Reid, who needs the votes of all sixty of his caucus members just to bring the bill to the Senate floor.

There was never going to be an easy, straightforward path to healthcare reform, but recently the political climate has become even more challenging. A year ago, rising healthcare costs were at the top of voters’ worries; now, with unemployment in double digits, jobs and the economy are paramount.

One telling sign of the shift is the fact that Obama and Democratic leaders had work so hard to persuade Democrats to take a vote that many saw as fraught with more political risks than rewards. This was particularly true for Democrats in politically marginal seats. Of the thirty-nine Democrats who voted against the House bill, thirty-one hail from districts that McCain won in 2008.

The Republican machine is already threatening these Democrats in the 2010 elections, and presumably also making life very uncomfortable for Congressman Joseph Cao of New Orleans, the sole, brave Republican to vote for the bill. But despite his concerns for his constituents, still suffering from the after-effects of Hurricane Katrina, it was the controversial abortion amendment that finally captured Cao’s vote. “Tonight, I voted to keep taxpayer dollars from funding abortion and to deliver access to affordable healthcare to the people of Louisiana,” he said in a statement posted on his website.

The abortion amendment, which passed by 240 votes to 194, blocks the use of federal subsidies to purchase insurance that covers elective abortions. The provision applies to insurance policies purchased with the federal subsidies that the health legislation would create to help low and middle income people buy insurance cover, and to policies sold by the government-run insurance plan (the so-called public option). It was brought forward after a forceful lobbying effort by Roman Catholic bishops and pressure from conservative Democrats. Legislators who support abortion rights have vowed that they will oppose any final bill that includes this amendment, so this fight will continue in the Senate.

The other part of the battle for healthcare reform that will undoubtedly intensify is the nastiness of the Republicans and their ultra-conservative allies. Last week, after endless promises, the House Republicans finally introduced their own bill – an amalgam of market-oriented measures that would limit medical malpractice lawsuits, expand the use of tax-sheltered medical savings accounts, let people shop for insurance outside their own states, and make it easier for small businesses and hard-to-insure people to get coverage.

The bill reflects conservatives’ suspicion of sweeping new programs, federal spending and additional regulation. It is costed at $61 billion, compared to the House bill’s almost $1 trillion. But it would extend health cover to only three million additional people, leaving fifty-two million uninsured, and does not include a ban on discrimination on the basis of pre-existing conditions. Unlike the Democrats’ bills, it does not include subsidies or other provisions that would make health insurance more affordable for people of modest means.

In the absence of a substantive counter to the Democrats’ proposals, the Republicans will continue resort to delay tactics and rhetorical claims that healthcare reform will culminate in government monopoly, socialism and the erosion of American freedoms.

Despite all these very real obstacles, though, there remains every reason for optimism that Obama’s key election promise will proceed. The House vote provides an important lesson in how to succeed with less-than-perfect party unity, a lesson that Senate Democrats can adapt and adopt. In the Senate, progressive Democrats may have to accept a deal without a public plan to keep the legislation alive. As in the House, compromise appears to involve a move to the right of the political spectrum, but this does not negate the possibility of real reform being enacted. •

In the red zone 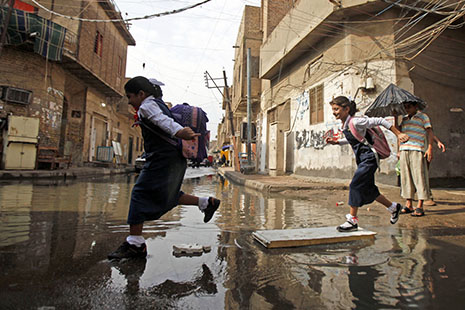