The mystery at the heart of the statistical survey 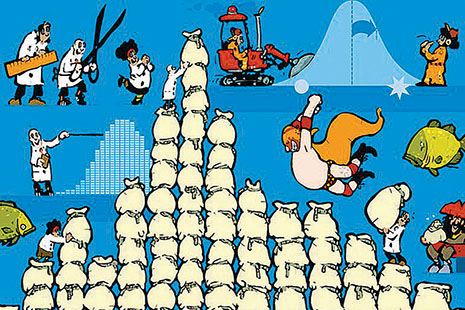 From Grady Klein’s cover for The Cartoon Guide to Statistics.

The Cartoon Introduction to Statistics
By Grady Klein and Alan Dabney | Hill and Wang | $31.95

IT’S DIFFICULT to imagine a world without sample surveys and the statistics they produce. We use statistics to measure our economy and to tell us whether times are good, bad or indifferent. Without statistics we would have no way of knowing whether the prime minister is popular or on the nose. Statistics let television stations, and more importantly advertisers, know which shows are popular and which are not.

As Sarah Igo points out in her terrific book The Averaged American, the rise of the electronic mass media, first radio and then television, coincided with the rise of the social survey. The two industries worked in tandem to simultaneously describe and create a mass public, Igo argues, with the sample survey providing new facts and the electronic mass media providing the means to distribute this new knowledge to the wider public. In this way, this new knowledge was democratised and, as Igo puts it, “the public could now find out who ‘the public’ was.”

Yet despite the centrality of sample surveys to public life, their underpinnings are not widely understood. I recently heard of an academic telling a class that a survey could not be relied on because the sample was only 20,000, a small fraction of the population it purported to represent. Television ratings systems are routinely pooh-poohed because they only involve very small numbers of viewers (and anyway, “I’ve never been interviewed”). Political polls are analysed to within an inch of their lives, and stories woven from very small shifts that often fall within the sampling error.

The Cartoon Introduction to Statistics is a promising antidote to these misconceptions. It is an entertaining and straightforward account of the mystery that lies at the heart of the sample survey: how information collected from a subset of the population can be used to represent the views of the broader population. There’s no need to pore over the text and images — the story unfolds easily, with key points repeated and emphasised. Readers won’t have become a statistician by the end of the book, but they should have a better grasp of statistics, their collection and their interpretation.

This is one of those rare books that will reward almost every reader. If you know nothing about statistics it will give you a good overall understanding of their methodological underpinnings and a basis on which to interpret and critique statistics you encounter. Those more familiar with statistics will be entertained by the examples used and impressed by the elegant explanations of probability sampling. For students embarking on a statistics subject or course it will be useful pre-reading. And it will be a useful primer for policy-makers, journalists, academics and others who engage with statistics but have never understood their probability basis and its implications. Give or take 2.5 per cent, I’m 95 per cent confident you’ll enjoy it. •

Scott Ewing is a Senior Research Fellow at the Swinburne Institute for Social Research.

What can Australians do? They used to make radios, TV sets and Volkswagens, writes Jock Given. After 2016, they won’t even be making Falcons 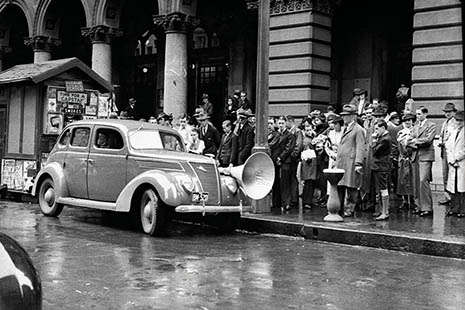