Not Nick and not Jeff: Barry O’Farrell at Martin Place station, Sydney, after he announced last Thursday that he would resign as NSW premier. Dan Himbrechts/AAP Image 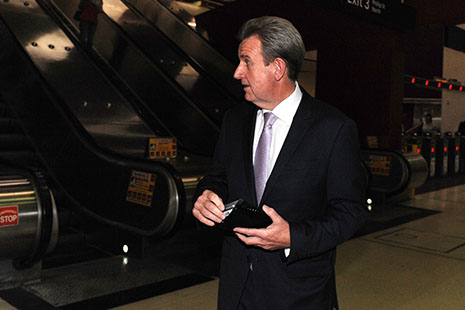 Not Nick and not Jeff: Barry O’Farrell at Martin Place station, Sydney, after he announced last Thursday that he would resign as NSW premier. Dan Himbrechts/AAP Image

NOT LONG after Barry O’Farrell won government, his predecessor as Liberal premier of New South Wales, Nick Greiner, made what now seems like an ironic comment. “Barry’s Barry, he’s not Nick, he’s not Jeff…” he said, referring to himself and former Victorian premier Jeff Kennett. “He has a more measured approach [which is] likely to lead to him being premier for a lot longer than Jeff Kennett or myself.” In fact, while Greiner was premier for four years and three months, O’Farrell lasted barely three years.

The irony doesn’t end there. Greiner was often compared unfavourably to O’Farrell in terms of political nous. He was much criticised for his performance before ICAC during the Metherell affair, when he responded to questions with “I don’t recall” about two dozen times. If O’Farrell had said “I don’t recall” at ICAC this week he would still be premier.

Yet O’Farrell is likely to leave behind a greater legacy than Greiner. Greiner’s big victory in the 1988 election melted like early snow. Within three years he was in minority government, and his successor John Fahey lost the 1995 election. A whole generation of talented Coalition ministers faded out of politics and Labor governed for the next sixteen years. Greiner certainly changed the nature of NSW politics with his introduction of the economic policies of what was then called the New Right and a new style of public management. His great failing, however, was that he did not take the voters along with him. The political costs of the Greiner era left many people reform-shy.

The O’Farrell model emphasised careful planning and avoidance of hasty, politically motivated decisions. Inquiries and consultation processes were set up in areas where major reforms were intended. O’Farrell said that he aimed to deliver “stable, mainstream, competent government.” He could have added “electorally successful” to the list. Of his first nine months in office, he said:

I think we’ve made a reasonable start to what is clearly supposed to be a long innings. This is not a job that goes for one year or two years… [W]e’re determined not to make short-term decisions because we know that’s been the problem of the last sixteen years.

A NSW business group accurately summed up the O’Farrell attitude to reform as a “boa constrictor approach… [A] small amount of change, people get used to it, [then] more change and more change… [T]he Kennett approach… was everything at once and people not coping.” O’Farrell’s caution was not a sign of indecision or weakness. As Imre Salusinszky wrote in the Australian: “Nobody should ever take Barry O’Farrell’s genial manner as indicating a lack of political cunning or ruthlessness.”

Caution did not mean the O’Farrell government was an achievement-free zone. O’Farrell’s strategy was to seek re-election on the basis of achievements rather than simply policies. The government’s asset sell-off program to free up funds for infrastructure became a model for the Abbott government. The privatisation of Ports Botany and Kembla demonstrated that there was a big demand for long-life, low-risk assets. Legislation was passed to sell the state’s electricity generators. The O’Farrell budgets reduced the deficit and finally brought recurrent expenditure under control – something that Labor had always promised but never achieved. The government delivered a light rail extension in Sydney, actually started construction on the long-promised northwest rail link and committed to the WestConnex Motorway, a $13 billion toll road and urban renewal project linking Sydney’s west with the airport and Port Botany.

The government also released a State Infrastructure Strategy and a Long Term Transport Master Plan. O’Farrell described them as comprehensive, long-term plans that took “the politics out of government spending.” A Public Service Commission was established to depoliticise the public sector and new legislation passed to update and rationalise the framework for public sector employment. Under the government’s Local Schools, Local Decisions program a wide range of powers over staffing and finance were delegated to school principals. Election funding laws were reformed to ban political donations from associations or corporations, though the legislation was struck down by the High Court in December on the grounds that it restricted freedom of political communication.

At the end of his premiership, O’Farrell was completely dominant in the government and Liberal Party. A pragmatic centrist, he had gained broad cross-factional support and established an excellent working relationship with the Nationals. Dissidents in the Liberal party room, centred on former minister Chris Hartcher, were firmly under control. O’Farrell warned his MPs, “I share the community’s lack of tolerance for politicians who, instead of devoting their energies to fixing infrastructure and improving services, want to focus on political self-advancement.” Through judicious manoeuvring, he managed to moderate the simmering factional tensions between the left and right in the Liberal machine. As opposition leader, he had successfully sponsored a reform package accepting the existence of factions and integrating them into the Liberal Party structure to avoid destabilising, winner-takes-all warfare. At the end of 2012, he used his considerable influence to quell a resurgence of factional warfare in the Liberal organisation.

O’Farrell didn’t see politics as an extension of show business and was not keen to make a fool of himself on breakfast television for the possible gain of a few points in the polls. He believed in speaking when he had something to say rather than constantly saturating the media with manufactured announcements. In the longer term, he believed, integrity and results worked better than spin with a jaded and cynical electorate. He was intent on delivering on his commitments, producing results and restoring credibility to government. This approach paid off. The Sydney Morning Herald described O’Farrell at mid-term as “sitting comfortably in the seat of power.” Certainly, he had some luck, mainly thanks to ICAC’s exposure of the corruption and misconduct of Labor powerbroker Eddie Obeid and former minister Ian Macdonald. But he also made some of his own luck with his careful, capable style of government.

Not that his government didn’t have problems and difficulties during its three years. The decision to give James Packer the right to build and operate a casino at Barangaroo created a perception that a major investor was being given favoured treatment. Allowing hunting in national parks in return for Upper House votes from the Shooters and Fishers Party was deeply unpopular. Finance minister Greg Pearce, who had previously been given a reprieve after appearing to be drunk in parliament, was sacked in August 2013 for breaching the ministerial code of conduct. Chris Hartcher was ordered to resign as energy minister in December 2013 when it was revealed he was being investigated by ICAC over political donations. The government’s cuts to the public sector generated much animosity; O’Farrell was criticised by the left for destroying community services and by the right for not cutting hard and deep enough.

In spite of these difficulties, he leaves his government and party in a commanding position. The Coalition holds seventy of the ninety-three Legislative Assembly seats. At the March 2011 election, he astutely positioned the Coalition in the centre and persuaded traditional Labor supporters that the Liberal Party could represent them. As a result, Labor lost significant support among traditional constituencies including wage-earners, tradies and ethnic groups, and its vote declined to disastrous levels across inner-city, suburban, regional and rural seats. The Liberals won a swathe of seats in western Sydney and made significant inroads in the Hunter and Illawarra. In the bush, the Nationals virtually annihilated Labor. Nearly three years later, a January/February 2014 Newspoll showed the Coalition’s two-party preferred support at 58 per cent, down 6 per cent from the March 2011 election but still a very comfortable lead. O’Farrell had a commanding advantage of 30 per cent over opposition leader John Robertson as preferred premier.

O’Farrell created a politically successful and effective model of government for his successors. The fact that the transition to a capable team of Mike Baird as premier and Gladys Berejiklian as deputy Liberal leader was managed smoothly is a tribute to his nurturing rather then neutering of capable colleagues. If he had been egocentric and thick-skinned, there is little doubt that O’Farrell could have toughed out this week’s events and been re-elected in 2014. By choosing to judge himself by the same high standards he demanded of his team he set an honourable example. Enoch Powell once said, “All political lives, unless they are cut off in midstream at a happy juncture, end in failure, because that is the nature of politics and of human affairs.” Barry O’Farrell has departed not happily but at that crucial juncture. •

David Clune was the NSW Parliament’s Historian and is currently an Honorary Associate in the Department of Government and International Relations at the University of Sydney. He is the co-editor with Rodney Smith of From Carr to Keneally: Labor in office in NSW 1995–2011.