The place of reconciliation

Does our opening up to Indigenous history work best locally? 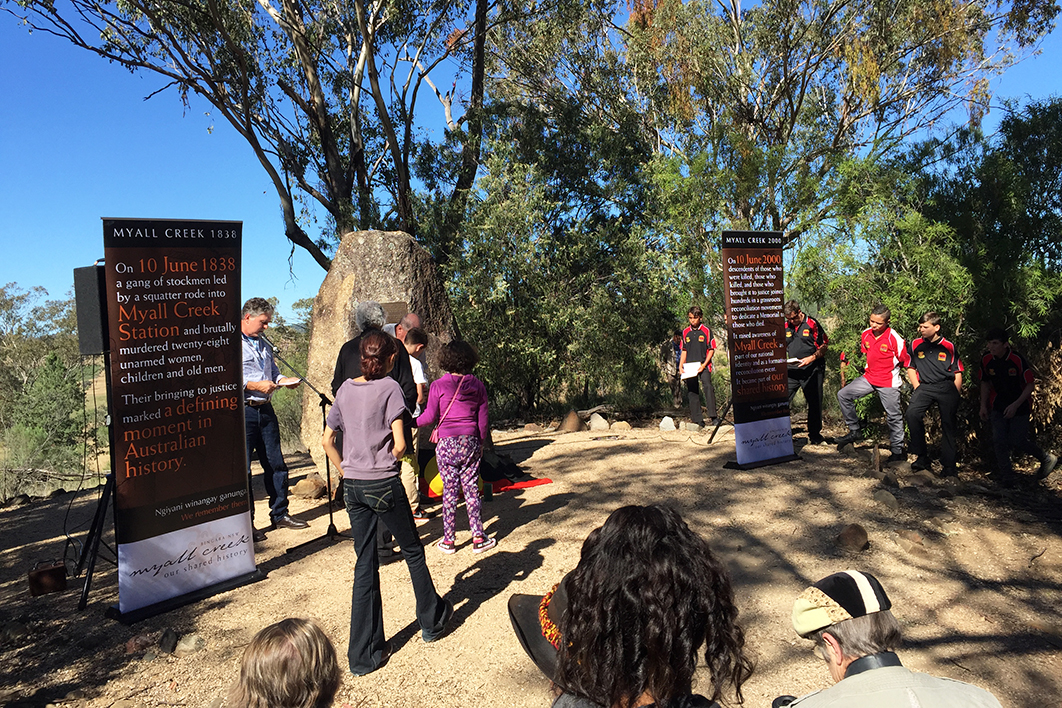 In the three decades since the legislation passed, the federal government process has been through many iterations, and it’s fair to say it’s had a vexed history. Some critics believe it prioritises a vision of shared national identity that’s more reassuring for non-Indigenous Australians than empowering for Indigenous Australians. Formal reconciliation policies have been weighed down, they say, by a dense bureaucracy that satisfies the idea of government action but doesn’t do enough to advance reconciliation itself.

National Reconciliation Week, on the other hand, aims to “inspire and enable” all Australians to participate in the spirit of reconciliation at a grassroots level. Coordinated by Reconciliation Australia, an independent, non-profit organisation, it is framed each year by two significant points on the nation’s slow and rocky road towards Indigenous recognition: 27 May, the anniversary of the 1967 referendum, and 3 June, the date in 1992 when the High Court released its Mabo native title decision.

This year’s Reconciliation Week focused on twenty actions that could help make reconciliation everyone’s business, including that Australians learn more about the Indigenous histories embedded in their locality and participate in community initiatives to recognise those histories.

But what does reconciliation really mean to ordinary Australians — Indigenous and non-Indigenous — and how might it prompt us to engage with our histories? Since 2008, Reconciliation Australia has been gathering insights into these very questions through a biennial survey. The Reconciliation Barometer samples the changing attitudes of Indigenous and non-Indigenous Australians towards five dimensions of reconciliation: contemporary race relations (degrees of trust and respect), equality (Indigenous rights and opportunities), institutional integrity (support from political, business and community bodies), unity (the valuing of Indigenous cultures and heritage within Australian society), and historical acceptance (the recognition of historical injustices and their impacts).

To some extent, a desire to give greater recognition to Indigenous people’s vital place in Australia’s post-contact history is already embedded in the public imagination. A large majority of all respondents agree that official Anzac Day ceremonies should honour Indigenous as well as non-Indigenous soldiers. Nearly three-quarters of all respondents support the dual naming of significant sites to recognise both Indigenous and English names. These responses suggest that public consciousness of our shared history is gradually growing in parallel with gradual institutional change.

Even so, the 2020 barometer shows that non-Indigenous Australians still don’t know a great deal about how Indigenous history entwines through the national story. While two-thirds of non-Indigenous respondents claim to have good knowledge of Australian history, less than half this group claim to know much about the place of Indigenous history within it. This stands in stark contrast to the three-quarters of Indigenous respondents who say they’re knowledgeable about their own histories and the national history, and the ways they interweave.

And here’s the rub. The Reconciliation Barometer tells us that the vast majority of Australia’s general community believe in the importance of truth-telling processes as a means “to acknowledge the reality of Australia’s shared history.” But it also tells us that large numbers of people remain doubtful about what truths our national history might hold. More than a third of non-Indigenous respondents are unsure or are unconvinced that the pre-colonial Australian continent was occupied by a network of Indigenous nations with their own custodial connections to land. A similar percentage are unsure or unconvinced that frontier wars took place across Australia’s nineteenth-century colonies.

If anything, this gap reinforces the importance of community initiatives designed to open a perspective on the Indigenous histories that weave through every local history.

It may be a slow process, but these kinds of initiatives have been growing over the last three decades as communities look for ways to acknowledge the stories of Australia’s violent frontiers region by region. While national controversies continue around how we remember Australia’s origins, community-led projects that recall locally contested country are emerging at the grassroots level, often driven by collaborations between Indigenous and settler-descended groups and supported by local heritage bodies or councils. In this respect, action towards reconciliation’s goal of historical acceptance appears to have been greater at the local level.

This trend towards grassroots memorialisation of colonial violence reflects the fact that frontier wars, by definition, took place in localities. Battles over land and intimidatory “dispersal” unfolded not through any coordinated, cross-continental campaign but through a pattern of repetitive violence. This cycle ebbed only to intensify again as pastoral expansion stretched, decade after decade, into Aboriginal country.

Accounts of conflicted frontiers are often passed down intergenerationally through the Indigenous and non-Indigenous communities who share roots in the colonial past. For this reason, perhaps, the practices of reconciliation might feel more accessible when they emerge from local communities, anchored to intimate histories of place, than when they speak to the iconographies of the nation.

This isn’t to say that community-led reconciliation projects don’t have national impact. The Myall Creek Massacre Memorial Site, which remembers the June 1838 violence there, emerged from a community-centred reconciliation process initiated by Aunty Sue Blacklock, Elder of the Nucoorilma people of the Gamilaraay nation. It is now registered on the National Heritage List. Around Australia, Indigenous communities are retelling the histories of colonial contact on their lands in ways that reshape national narratives of foundation. From place to place, these projects don’t just acknowledge the fractious conditions of our colonial beginnings but also celebrate Indigenous people’s enduring connections to Country.

These kinds of community-led initiatives are modelling for the nation a pathway to reconciliation that doesn’t regard the past as something to be acknowledged and then put away. By voicing Indigenous perspectives on our shared past — perspectives that have long been silenced and neglected — they recognise the resilience of Aboriginal cultures and enable broader reflection for everyone on what it means to live in a nation that was built, place by place, on Indigenous land. •

Amanda Nettelbeck is a Professor in the Institute for Humanities and Social Sciences at the Australian Catholic University.