The price of re-engaging with Fiji 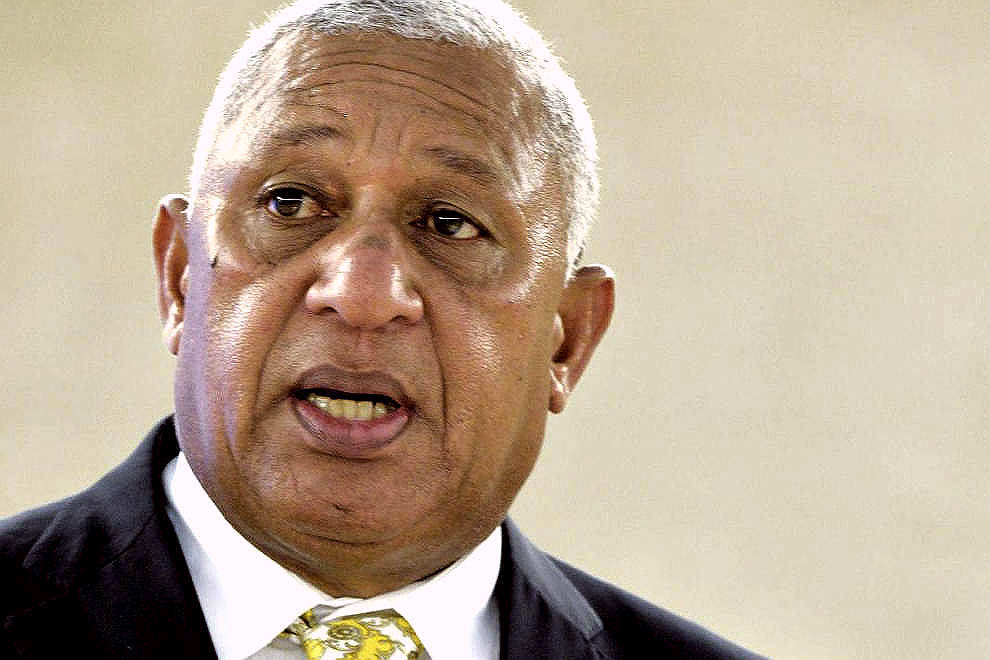 The furore following NZ prime minister John Key’s visit to Fiji earlier this month shows that all is not well for New Zealand’s Pacific relations. Fiji’s prime minister, 2006 coup leader Frank Bainimarama, used the occasion to offer a stirring defence of his “revolution,” launch a diatribe against the government he deposed by force, and once again criticise New Zealand’s imposition of sanctions after the December 2006 military takeover. One journalist in Key’s entourage wrote that Bainimarama “broke nearly every rule in the diplomatic handbook” when he embarrassed his NZ counterpart at a function “supposedly held in his honour.”

Both prime ministers have traded insults in the past. Last year, Key accused Bainimarama of “mouthing off” after the Fijian PM called for a reconfiguration of the Pacific Islands Forum to diminish Australian and New Zealand influence. Key said that no one should take the Fijian leader seriously. Bainimarama’s defence of his 2006 coup might have been crude, poorly timed and largely inaccurate, but he is not alone among national leaders in using diplomatic occasions to celebrate the real or perceived founding moments of his country.

For its part, Australia has not sent a prime minister to Fiji since the 2006 coup, though foreign minister Julie Bishop travelled to Suva for a carefully choreographed meeting with Bainimarama in February 2014 and visited again in the wake of Cyclone Winston early this year. Before assuming her cabinet post, she too was publicly vilified by a Fijian leader: in her case, at a 2013 Brisbane gathering of the Australia Fiji Business Forum by foreign minister Ratu Inoke Kubuabola, who lambasted the Australian government about the regional impact of Australian detention centres on Manus Island and Nauru.

Conveying much the same message as Bainimarama delivered to John Key, Kubuabola also opined that “Australia chose to punish Fiji for finally addressing the deep divisions in our society, the lack of equality and genuine democracy and the corruption that was destroying our country from within.” After she became foreign minister, Bishop’s invitation to Fiji to discuss a possible restructuring of the Pacific Islands Forum was snubbed.

The critical issue is not whether Bainimarama’s comments this month were diplomatic or not, but whether his interpretation is accurate. Has his government initiated “genuine democracy,” increased social equity, countered corruption and soothed ethnic divisions? And why have ministers on both sides of the Tasman felt unable to put forward an alternative assessment?

Any verdict on the Fiji “revolution” needs to be carefully weighed. In many ways, it is still too early to make a definitive judgement. True, the Bainimarama government has been in office since 2006, but its sympathisers would argue – with some justification – that Fiji was in crisis-management mode in the early post-coup years. Only after 2010, as the economy recovered and the security situation stabilised, could Bainimarama’s administration begin implementing its agenda. Still, the subsequent six years – or two terms of an Australian government – is a long enough period for some verdict to be reached, to the degree that a lack of accurate information allows. The tenth anniversary of the coup this coming December will inevitably encourage competing judgements of progress in Fiji since 2006.

Many of Bainimarama’s claims owe their domestic resonance to the government’s control over the flow of information. With the opposition in Fiji’s parliament struggling to counter government propaganda, strong media censorship legislation and a compliant public service, those in power are often able to shape interpretations of how the country has fared since 2006. But how strongly do their claims stack up?

• Genuine democracy? Parliamentary sitting days have been cut back, key opposition MPs suspended, and the chair of the parliamentary public accounts committee sacked. It’s true, though, that the 2013 constitution abolished communal electoral rolls, which long segregated Fiji’s citizens by race, and dispensed with a preferential voting system that worked badly at elections in 1999, 2001 and 2006. The 2014 polls, held under a new proportional system, were probably not rigged in any direct way, but the wider electoral environment was heavily constrained in favour of the incumbents. The Australian-led observer team found that election “credible” but cautiously steered clear of addressing the wider issues.

Despite the return to elective democracy at the national level, municipal authorities remain unelected. The 2013 constitution was introduced by decree and can’t be amended except with the support of 75 per cent of registered voters – an exceptionally high threshold. That alone is likely to store up major problems for the future.

• Reduced inequality? Much is made of Fiji’s household income and expenditure surveys, which found a fall in poverty between 2008–09 and 2013–14. But even if these statistics are accurate, they are part of a longer-run trend that pre-dates the 2006 coup. A 2002–03 survey found a 35 per cent rate of poverty, which had fallen to 31 per cent by 2008–09 and 28.9 per cent by 2013–14 (though comparisons through time can be hazardous). It’s important to remember that the Fiji Bureau of Statistics, which collects the basic data, experiences political interference, and some of its key reports, such as the 2007 census analysis and the 2010­–11 employment and unemployment survey, have not been released. Even if the poverty rate has indeed fallen, it is not clear that government policies are responsible.

• Less corruption? The Bainimarama government established a Fiji Independent Commission against Corruption, but much of its work has been highly politicised and embroiled in vendettas against those associated with the deposed government. The public accounts committee that functioned until the 2014 election was allowed only to investigate pre-coup malpractice. After the election, auditor-general’s reports were released for the post-coup years (2007–13) and an opposition-chaired public accounts committee was established. But the subsequent sacking of the committee’s chair and the substitution of a pro-government MP have stymied its investigations. Serious allegations against the post-coup government – including confirmed reports that ministerial salaries were diverted during 2010–11 through a firm owned by the attorney-general’s aunt – have not been fully investigated.

• Improved ethnic relations? Here, assessments diverge wildly, with alternative verdicts shaped by broader interpretations of Fiji’s history and of the resilience of its communal tensions. Reactions to the 2006 coup were themselves highly ethnically polarised, particularly during 2006–10 when opposition was widespread within the indigenous Fijian community, among lawyers and professionals, and in the media. Since around 2009–10, the indigenous response has been much more divided, with many prepared to wait and see what the Bainimarama government delivers.

The new millennium may well mark the transition away from the ethnically based politics of the post-independence years, but it is less certain whether this is a result of the coup or of a longer-term demographic reconfiguration. And it is impossible to know what might have happened if the short-lived multi-party cabinet of May–December 2006 ­– which featured prominent political leaders from both of the major communities – had survived.

Many of Fiji’s post-independence elections featured two big, antagonistic ethnically based parties, one largely indigenous-supported and the other mainly Fiji Indian–backed. The shift away from the bicommunal polity of the 1980s, when indigenous Fijians and Fiji Indians each accounted for around 50 per cent of the population, potentially takes much of the heat out of the electoral battle. Ethnic Fijians now constitute around 63 per cent of the country’s citizens and Fiji Indians are down to around 33 per cent, with the gap widening. The likelihood is that the standing of the Bainimarama government, rather than a showdown between communally identified parties, will dominate elections for some time to come.

Since 2010, an Australian and New Zealand policy of mild sanctions on Fiji has been displaced by a policy of re-engagement, but this new policy has been no more successful than its predecessor. Of course, Bainimarama is now an elected prime minister, Fiji is an important regional player, and nothing will be gained by isolating the island nation. The re-engagement policy has been fuelled by a sensible conviction that working alongside an ally is likely to be more effective than remonstrating with an adversary. But, as John Key’s visit indicated, combined work on the rehabilitation after Cyclone Winston earlier this year offered little payoff in terms of a public warming of diplomatic relations. Disengagement or full re-engagement are not the only policy options.

The re-engagement policy has meant that ministers in Australia and New Zealand have been reluctant to make critical statements about Bainimarama’s democratic backsliding or chequered human rights record. Fiji regime insiders, who after the 2006 coup chose to work within government in the hope of achieving reform, complain that they nowadays get little support from Canberra or Wellington.

Dwelling on conflicting interpretations of the 2006 coup may seem fruitless, but berating Australia and New Zealand for allegedly victimising Fiji during 2006–10 remains a central theme in the Fiji government’s narrative about its own origins. Associated claims that 2006 was a legitimate “revolution” are still being used to punish the opposition, clamp down on dissent, control the media and justify limited accountability. Despite facing no serious domestic threat, and reflecting its military origins, the Bainimarama government appears unable to normalise the security situation. It operates perpetually in emergency mode and justifies doing so in terms of its heroic transformation project.

One possibility is that the rhetoric will ease with time, or that the services of the more inflammatory speechwriters will be dispensed with, but so far there is little sign of this. Until that occurs, the best approach might be to keep Suva off the itinerary of Australia’s next prime minister. •

Jon Fraenkel is a Professor in Comparative Politics in the School of History, Philosophy, Political Science and International Relations at Victoria University of Wellington.