The prospects for action on climate have never been better

A series of trends has combined to radically change policies among the largest emitters, writes John Quiggin 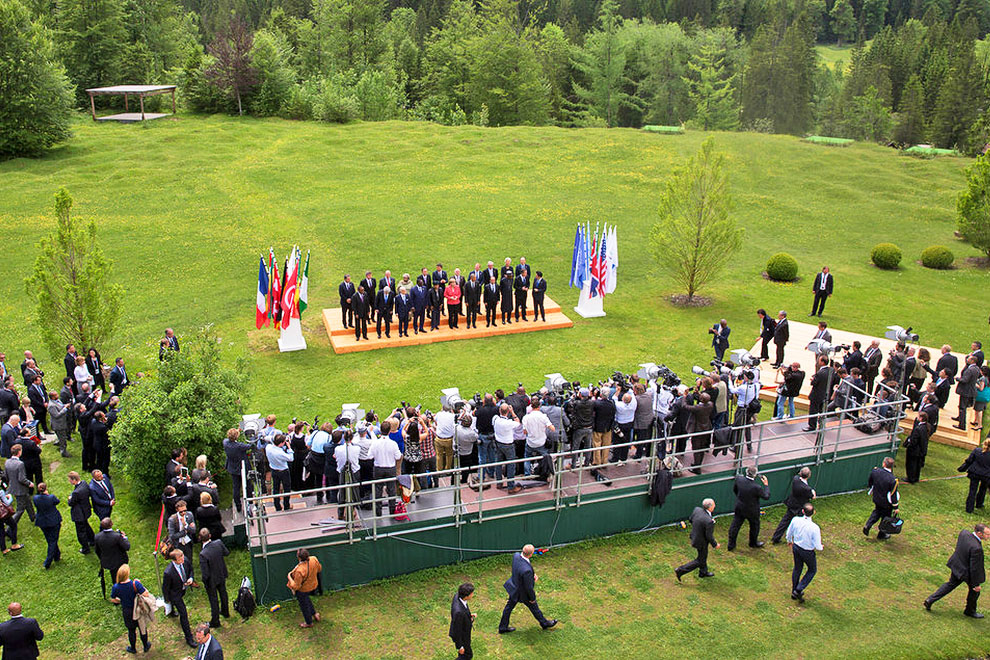 Climate change has been called “the greatest challenge facing the world,” and it has certainly been one of the most intractable. At countless meetings dating back to the Rio Earth Summit in 1992 everyone has argued that someone else should bear more of the burden. Meanwhile, emissions of carbon dioxide and other greenhouse gases have continued to grow.

Even more significant has been the resistance of the political right in the English-speaking countries. Large sections of this group, including senior political figures, see climate change as a socialist conspiracy cooked up to impose world government. To pick just one example, Maurice Newman, prime minister Tony Abbott’s business adviser, recently asserted that the United Nations was “using false models showing sustained temperature increases to end democracy and impose authoritarian rule.” In Canada and Australia, governments influenced by these views have done their best to stop or roll back mitigation policies.

In these circumstances, many observers have concluded that we are past the point of no return, and that dangerous climate change (warming of 2 degrees Celsius or more) is inevitable. Others have concluded that only some drastic fix will solve the problem. Their various, and incompatible, suggestions include large-scale geo-engineering, a crash program of building nuclear power plants, and the abandonment of industrial civilisation.

Positions of this kind, once taken, are hard to shift. So it’s not surprising that hardly anyone has recalibrated their views in response to recent developments that have greatly improved our prospects of avoiding dangerous climate change. But such a recalibration is certainly necessary if we’re to make progress.

The first of these developments is the effective end of the debate over climate science. The debate hasn’t been resolved, but it has been clarified, with the positions of the two sides now established and unlikely to shift.

On one side is a vast body of scientific analysis, from a wide range of disciplines, summarised in the reports of the Intergovernmental Panel on Climate Change, or IPCC. There is no longer any scientific debate on the key issues, or any serious perception of one. Mainstream climate science has established that global warming is real, continuing and caused primarily by human activity.

On the other side are those who reject science and appeal instead to what Andrew Bolt calls “the common sense of the layman,” where the layman, as well as being explicitly male, is implicitly assumed to be middle-aged or older and politically conservative. The governments of Canada and Australia, where such commonsensical laymen hold political power, have had some limited success in turning back measures to stabilise the climate. In general, however, climate “sceptics” have lost whatever credibility they once had, and are now treated in much the same way as creationists and antivaxers.

Second, the widely held assumption that improvements in living standards are inseparably linked to increased use of energy has turned out to be false. This is most evident in relation to oil, often regarded as the lifeblood of industrial civilisation. The average amount of oil per person consumed in the world peaked back in 1979. Since then, using less oil per person every year, living standards have risen substantially in the developed world and dramatically in the world’s most populous countries, India and China.

The most important use of oil is as a transport fuel, most notably in private cars. Oil’s decline has been the result of a long-term trend to more fuel-efficient vehicles and, more recently, a reduction in the average distances driven, as more and more journeys have been displaced by electronic communications. The United States, long the spiritual home of the motor car, has seen the most dramatic declines, both because of mandatory fuel efficiency standards and, since the mid 2000s, because of a decline in the average distance driven by Americans.

This is part of a more general pattern. Increasing the efficiency with which energy is used is the simplest and cheapest way of reducing emissions, and it has already happened on a large scale. New refrigerators, for example, use 70 per cent less energy than equivalent products from the 1980s, and the most efficient models on the market do better than that. The same is true for everything from lighting to industrial processes.

Third, the cost of replacing fossil fuels with renewable energy has turned out to be far below even optimistic estimates. The most striking developments have arisen with solar photovoltaics. As recently as 2008, solar cells cost more than US$4 per watt, without taking account of installation and other “balance of system” costs, and the associated cost of electricity was over 50 cents per kilowatt-hour, far above that of fossil fuels. By the end of 2013, the cost per watt of cells was down around 75 cents, and the cost of utility-scale solar PV was around 11 cents per kilowatt-hour, with further falls in prospect.

In some favourable locations, these cost reductions are enough to make solar PV cheaper than coal-fired or gas-fired power. Elsewhere, they mean that the cost of replacing fossil fuels with renewables in electricity generation is small enough to achieve with a combination of regulatory initiatives and relatively modest carbon prices, with no significant impact on the economy as a whole.

Finally, as affordable alternatives have become available, increasing attention has focused on the damaging health and environmental effects of burning fossil fuels, particularly coal. Once these health costs are taken into account, the case for replacing coal with renewables becomes overwhelming.

The effects of burning coal are particularly severe in the major cities of developing countries – Beijing and Delhi, for example – where pollution levels are already well above danger levels. Estimates of the annual death toll for India alone run into the hundreds of thousands.

Taken together, these developments have produced a radical change in the policy stance of the governments of the largest emitters, most notably in China, the United States and, more slowly and reluctantly, India. Last November’s joint announcement by US president Barack Obama and Chinese president Xi Jinping on emissions reductions embodied commitments that would have been unthinkable even five years ago.

More recently, the G7 meeting in Bonn committed to a 40 to 70 per cent reduction in global emissions by 2050, and to complete decarbonisation of the global economy by 2100. These commitments are consistent with the IPCC’s estimate of the cuts required to stabilise greenhouse at 450 ppm, giving a good (66 per cent or higher) chance of keeping global warming below 2 degrees Celsius.

Even better news is the unexpected halt in the growth of carbon dioxide emissions in 2014, the first time this has happened in the absence of global economic downturn.

It’s not all good news, though. Conservative governments in Australia and Canada have pushed back against both the science of climate change and efforts to mitigate it. Japan, faced with the closure of all its nuclear power stations following the Fukushima disaster, has turned back to coal, with a weaker effort on renewables. A win for the Republicans in the 2016 US elections could produce a “coalition of the unwilling” capable of setting back action on climate change for years, perhaps long enough to put the goal of preventing dangerous warming out of reach.

More generally, achieving the targets set out by the IPCC and G7, even with general goodwill, requires urgent action to translate long-term global goals into specific national commitments. The Conference of the Parties to be held in Paris in December will be crucial in this respect. It would be a mistake to expect a once-and-for-all solution to a problem that has been the focus of decades of debates and disagreement. On the other hand, the world cannot afford the time that would be wasted by a cobbled-together declaration that defers, yet again, specific commitments and concrete plans. The prospects for action to stabilise the global climate have never been better. Let’s hope they will be realised. •

There’s a spirited discussion of this piece at Crooked Timber, with mention by John Quiggin of a couple more encouraging developments.

National Affairs What to do about China? Adam Triggs 5 April 2021 Australia is struggling to live with China, but can’t live without it. What can be done?
Close

The invasion of the heavy hitters

Labor’s state election successes during the Howard era propelled ill-equipped party heavies into Canberra, writes Peter Brent. The Killing Season is showing us some of the results

Campaign-ready: Bill Shorten, who used his Victorian power base to enter federal politics, with prime minister Julia Gillard in the Melbourne suburb of Blackburn during the 2010 election campaign. William West/AFP Photo 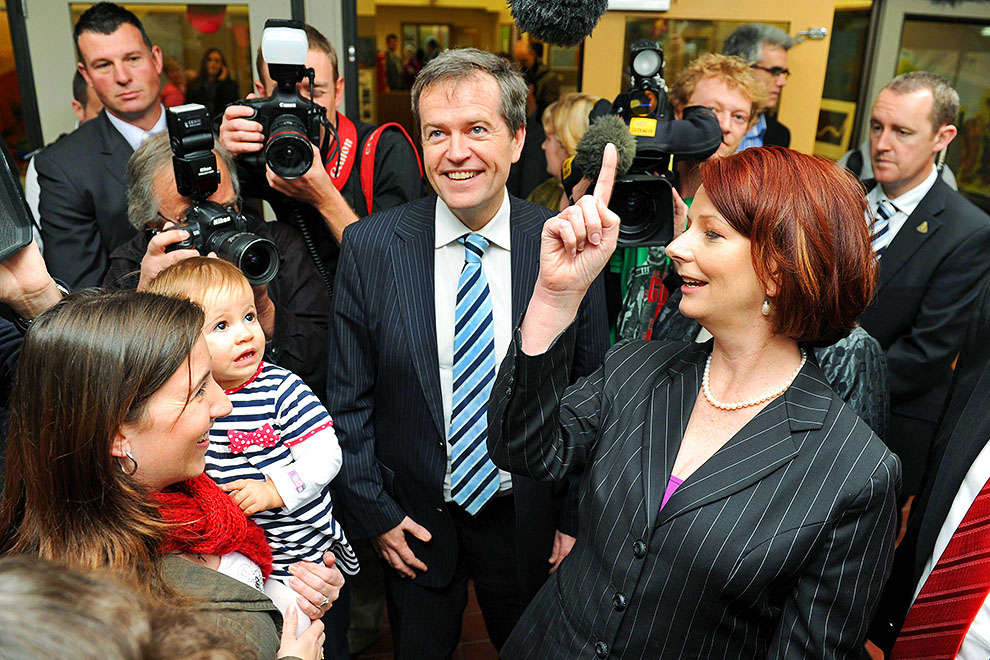 Campaign-ready: Bill Shorten, who used his Victorian power base to enter federal politics, with prime minister Julia Gillard in the Melbourne suburb of Blackburn during the 2010 election campaign. William West/AFP Photo