The road from Copenhagen

How did we get from there to here? In Paris Giles Parkinson looks at how the momentum built for climate action 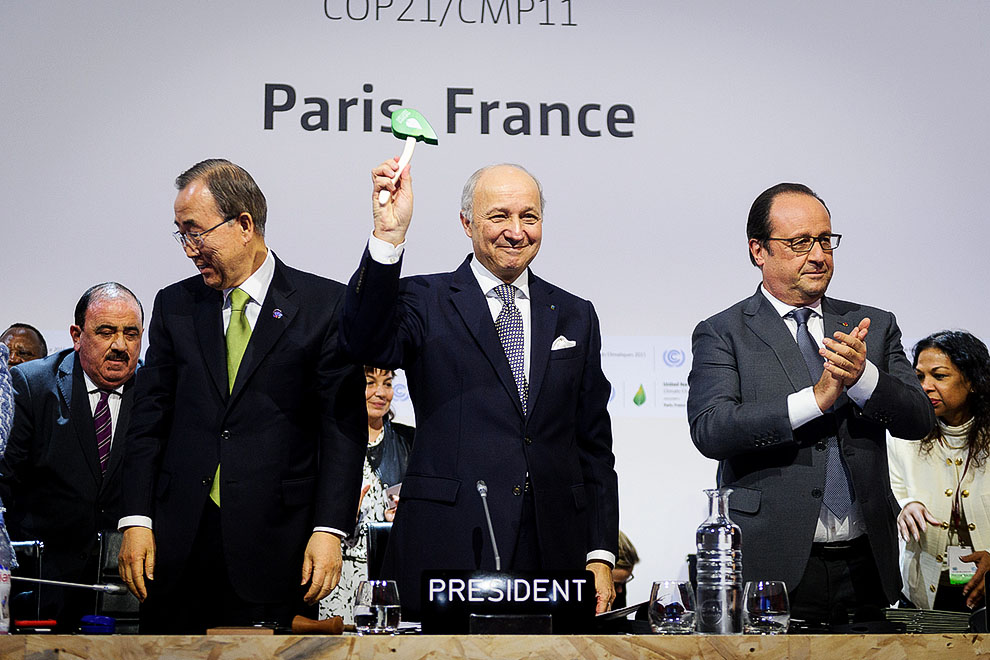 After decades of resistance from fossil fuel interests, twenty-one years of frustrating negotiations, two years of intense diplomacy by the French, and two weeks of concentrated talks, French foreign minister Laurent Fabius was poised to tell the world that a deal – if not to save the planet, then at least to prevent its worst impacts – had been done.

“You have to gavel,” suggested Christiana Figueres, the executive director of the UN Framework Convention on Climate Change, who picked up the wreckage of the process after the failure of Copenhagen and patiently and persistently put it back on the road to success.

“It’s a small gavel, but I think it can do a great job,” Fabius responded. And so, at 7.30pm local time on Saturday 12 December, Fabius brought down the gavel, signalling the beginning of the end of the fossil era. The gesture created a moment’s pause, and then an outpouring of celebrations on the conference floor and in nearby corridors. In the boardroom of Big Coal, the groan might have been audible.

The deal secured by 196 nations in the otherwise bleak terrain of a conference centre on the edges of the Le Bourget airport, north of Paris, goes beyond what anyone could have imagined six months ago, or even a fortnight ago when 150 government leaders turned up to the first day of talks in the biggest gathering of leaders ever seen.

The Paris Agreement calls for a target to keep average global warming to “well below” 2°C, and includes an aspirational target of 1.5°C – targets that mean that fossil fuels will need to be removed from the world’s energy systems by around 2050. To get there, the world is going to have to quickly scale up its actions. The Paris Agreement calls for a stocktake in 2018, followed by new pledges, and for this process to be repeated every five years until the target is met.

There is clearly much work to be done. The Paris Agreement is criticised by some for its fluffy language, but that reflects the nature of the UN beast and the need for compromise to get a deal done with such diverse interests at stake. Yet, while the document suggests at one point that emissions will need to peak “as soon as possible,” in other sections it is quite explicit.

It notes, for instance, that based on the pledges brought to Paris by 186 of the participating countries, the world is still heading to increase its annual emissions from fifty gigatonnes a year now to fifty-five gigatonnes in 2030. But article 17 makes clear that if the 2°C target is to be met, then those annual emissions will need to be cut to just forty gigatonnes a year by 2030, and to far less if the “well below 2°C” and the 1.5°C scenarios are to be met. That, says Malte Meinshausen from Potsdam University and the University of Melbourne, means emissions will need to peak by 2020. By 2050, the energy sector will need to be carbon neutral.

“We have witnessed something incredible today,” Climate Council chair Tim Flannery said. “Finally, we can feel hopeful that we are on a path to tackling climate change.” But how did this happen? How, in the space of a few short years, did disaster at Copenhagen translate into success at Paris?

The answer lies mostly in technology. The stunning decline in the cost of solar (a fall of more than 80 per cent since 2009) and wind energy means that the task of decarbonising the world’s energy system doesn’t look quite so hard. Indeed, it might even cost less in terms of outgoings, and save trillions in avoided health and climate costs.

This, and the growing evidence that 2°C would not be low enough to protect much of the world’s population, led to the creation of a new coalition of countries that ruptured the traditional negotiating blocs – the division between developed and developing nations – that have dominated and frustrated talks over the past two decades.

Australia, courtesy of its Abbott-era policies, found itself excluded two years ago from the loose grouping of progressive nations, known as the Cartagena Dialogue, it had helped to found. When a new “high ambition coalition” was revealed, Australia was also on the outer. Despite playing a constructive role at the talks, Australia’s policy settings and rhetoric didn’t change: the carbon price is dumped, the renewable target reduced, two key finance institutions remain on the chopping block, and emissions in the industrial sector are growing as fast as Australia can buy emissions elsewhere with its Emissions Reduction Fund.

In Paris, foreign minister Julie Bishop even found time to praise coal because it could cure “poverty and hunger.” It is one thing to make such remarks on the domestic stage, quite another in the heart of a climate conference trying to undo the damage that coal is causing to the climate, and to health.

Yet, seemingly embarrassed by its isolation after Brazil and then Canada joined the new coalition, Australia sought to join too. It finally did so, on the floor of the plenary when the process was all but over, but even then Australia didn’t quite get it.

Bishop downplayed its significance, saying, “This is not a negotiating coalition, this is a group of people who say we all share a view about an ambitious agreement.” But to most observers, the emergence of a bloc that brought together the world’s biggest economy, Europe, the poorest nations in Africa, the vulnerable island nations of the Pacific, and powerful emerging economies was one of the most significant developments in the history of the talks. In the end, it was able to diffuse the obstructionism of Saudi Arabia, India and China, and the 1.5°C target was thrust to centre stage.

Even after the talks were completed, Bishop remained equivocal about Australia’s policies. While other ministers talked of the need for decarbonisation and ambitious policies at home, Bishop talked now of having “the flexibility” to move, but not so far as to “damage” Australia’s economy. “We have to get that balance right between environmental and economic outcomes,” she told media.

Asked about the likely demise of fossil fuels, Bishop responded, “Nobody expects countries to destroy their own economies. That would be self-defeating.” But that’s exactly what Australia risks doing if it retains its attachment to coal.

Indeed, one of the reasons why the final deal ended up with such ambition is that governments are now playing catch-up to global businesses, which have already taken note of the huge slump in renewable energy costs since Copenhagen, and are now investing more in renewable energy than they are in conventional generation.

Howard Bamsey, the former Australian climate ambassador and head of delegation – a man who has been to nineteen of these conferences – was taken aback by the transformation in the business delegations. Once concerned only with maintaining the status quo, they were now, Bamsey said, turning the conference – away from the negotiating rooms – into a sort of giant trade show. It was a strong indication, he said, that what the governments do matters less, and the technology is now driving change.

Still, the Paris agreement will provide an enormous fillip to that change. Sean Kidney, an Australian who heads the Climate Bonds Initiative, says there could be $1 trillion a year of clean energy financing through bond markets by 2020. “The community has opened the way for institutional investors, regions and cities to now take the lead on climate finance solutions with confidence that governments have set the low carbon direction,” he said after the deal was sealed.

Clive Hamilton, a board member of the Climate Change Authority who has been at these talks for the full two weeks, wrote before the final deal, “The most surprising revelation here at the Paris climate conference has been the astonishing shift in the world of investors over the past twelve months.

“There is now unprecedented momentum towards participating in the transition to a low-carbon economy, and the view at the ‘big end’ of the conference is that a strong agreement will provide an extra shove. It’s unstoppable now.”

One person facing an unstoppable transition is Andrew Vesey, the American who now heads Australia’s AGL Energy. He, too, was at the talks, and says the impact of rooftop solar, battery storage and smart meters will be so great that he doesn’t know what his business model will turn out to be – apart from the fact that it will be very different.

And Vesey knows that coal is coming to an end. AGL owns the country’s biggest single emitter, the Loy Yang A power station. But it is also one of the cleanest (in terms of emissions per output), one of the cheapest and one of the youngest. Which means that Loy Yang A may be the last coal-fired power station operating in the Australian grid. And Vesey intends to close that down by 2048 at the latest. •

The spies who came out of the dark

The allure of the secret service in the British imagination is also the entry code to citizens’ data, writes David Hayes in London 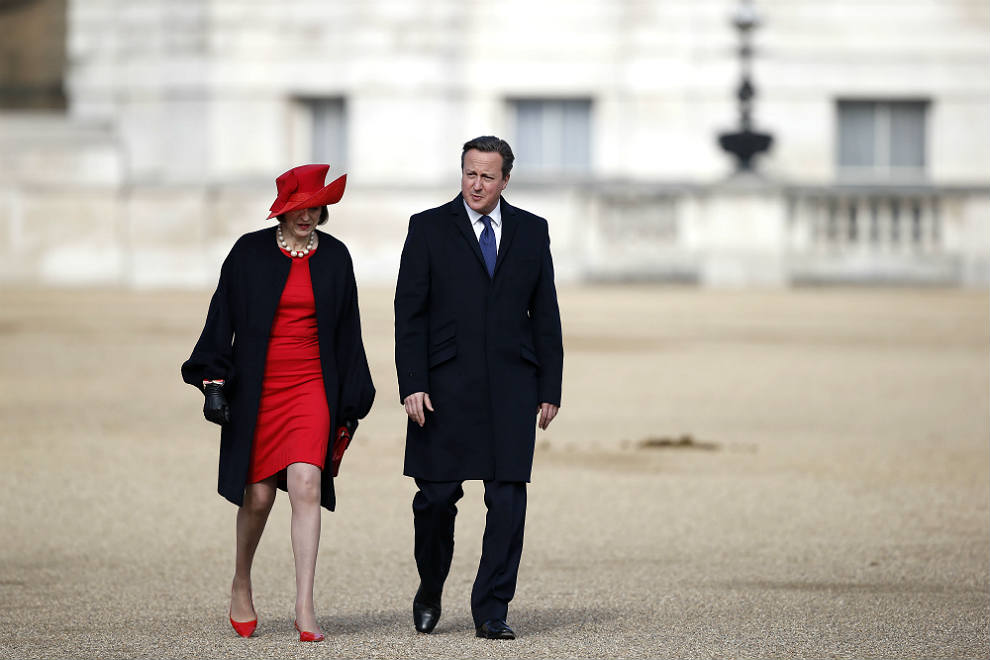