The slow demise of neoliberalism 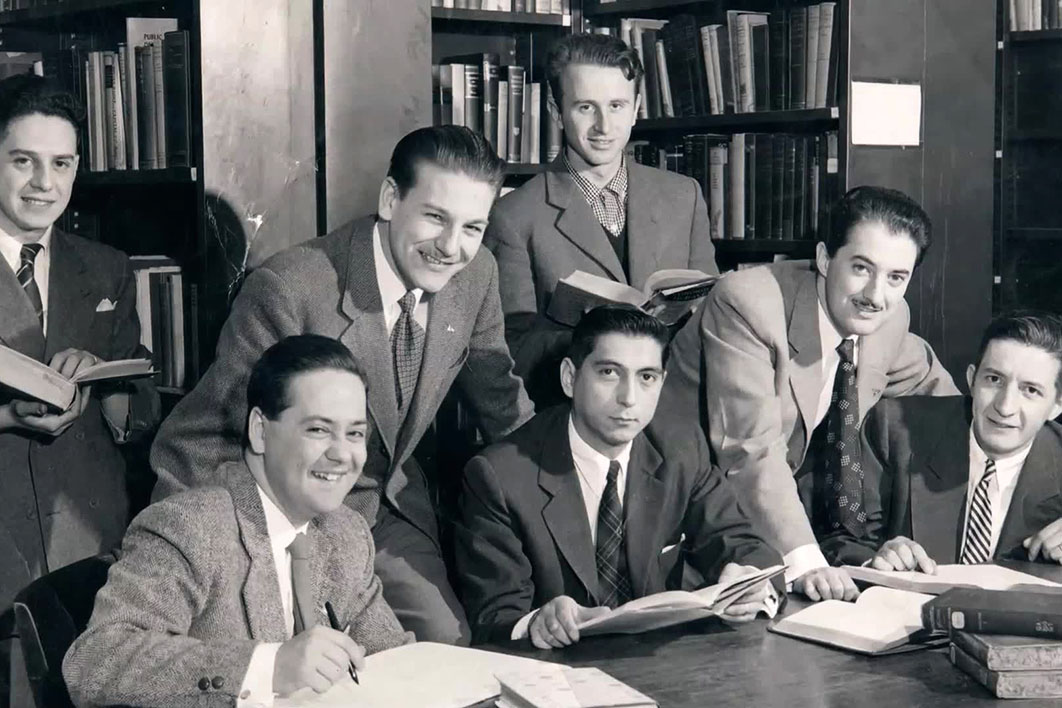 Chicago boys: the first group of Chilean students who studied economics at the University of Chicago under Milton Friedman in the fifties. Carlos Massad

Like most political terms, “neoliberalism” is used so loosely that many people have suggested it’s no more than a general pejorative. But the ideas and institutions that emerged from the economic chaos of the early 1970s undoubtedly differed in fundamental ways from those of the decades after 1945 and clearly deserve their own name. That these ideas and institutions have lost much of their power is just as obvious, even if nothing coherent has emerged to replace them.

That, at any rate, is the conclusion reached both by Brad DeLong in his new book, Slouching Towards Utopia: An Economic History of the Twentieth Century, and by Sebastian Edwards in his forthcoming book, The Chile Project: The Story of the Chicago Boys and the Downfall of Neoliberalism. Importantly, neither DeLong nor Edwards can be numbered among the neoliberals’ irreconcilable opponents. Both embraced neoliberalism for many years, though in different forms.

The Chile Project, of which Edwards was a generally sympathetic observer, ranks with Thatcher’s Britain as the paradigmatic case of what I’ve called “hard neoliberalism,” which combines authoritarianism and radical free-market policies. The success of the “Chicago Boys” — the economists who have long dominated the Chicago School of Economics — in persuading the Pinochet dictatorship to implement market-driven policies that were largely sustained under subsequent democratic governments. They included a privatised pension system, writes Edwards, along with “openness and globalisation, the fiscal rule, the taming of inflation, and austere health, education, and environmental policies.”

As the examples of Pinochet and Thatcher suggest, hard neoliberalism has nothing in common with the concern for freedom of speech that motivated John Stuart Mill and other liberal thinkers. But it was consistent with the strain of classical liberalism represented by the Austrian-born economist Friedrich Hayek, for example, who was more worried about preserving individuals’ freedom of action, particularly by minimising government interference in property rights.

The “neo” in hard neoliberalism reflects how the successes of social democracy in the twentieth century permanently discredited the kind of classical liberalism that would tolerate mass poverty alongside massive wealth. Neoliberals accepted the need for social services to raise most people above the poverty line. Provided that goal was achieved, they argued, there was no need to be concerned about political and economic inequality.

DeLong is, or at least was, a proponent of what I’ve called “soft” neoliberalism, which derives from the distinctive US use of the term “liberal.” Soft neoliberalism was epitomised by the Clinton administration, in which DeLong served as deputy assistant treasury secretary under Lawrence Summers. Outside the United States, soft neoliberalism was often described as the Third Way. Its central theme was the idea that the goals of social democracy (or liberalism in the US sense) could best be achieved by embracing market-oriented reforms, and particularly financial deregulation, while maintaining a generally redistributive welfare state.

In both hard and soft versions, neoliberalism reached its high point in the 1990s. Chile experienced severe economic crises under Pinochet, but the end of the dictatorship in 1990 was followed by a decade of strong economic performance. The government’s most distinctive reform, a pension system based on individual accounts, was seen as a model by George W. Bush’s administration in the United States.

The triumph of soft neoliberalism in the United States was announced in hyperbolic fashion by Francis Fukuyama’s The End of History and the Last Man and popularised in airport bestsellers like Thomas Friedman’s The Lexus and the Olive Tree. The stockmarket boom of the 1990s, roughly coinciding with Clinton’s term as president, seemed to promise endless prosperity.

Particularly notable were a series of corporate-friendly free-trade agreements that contained investor-state dispute settlement mechanisms allowing corporations to sue governments for policy decisions harmful to their profits. Even more striking was the embrace of the financial sector, symbolised by the appointment of former Goldman Sachs chairman Robert Rubin as treasury secretary.

Neoliberalism’s weaknesses became more evident from the late 1990s on. A series of financial crises (the Asian crisis of 1997, the Long-Term Capital Management bailout in 1998 and the dotcom bust of 2000) prefigured the massive financial disaster triggered in 2008 by the global financial crisis, which continued for most of the next decade.

Having recovered somewhat in the 1990s, productivity growth slowed to a crawl. DeLong marks 2010 as the year when the “long twentieth century” of technologically driven growth came to an end. As he observes, “The years following 2010 were to bring large system-destabilising waves of political and cultural anger from masses of citizens, all upset in different ways and for different reasons at the failure of the system of the twentieth century to work for them as they thought that it should.”

In Chile, meanwhile, the much-touted pension scheme had proved to be a flop, with workers losing much of their savings to management fees. A series of reforms have gradually moved the system back towards a more traditional public pension scheme. Moreover, while absolute poverty fell, broad-based prosperity didn’t result. Those at the top of the income distribution captured most of the gains.

Edwards sees the protest movement that launched in 2019 as the beginning of the end for Chilean neoliberalism. Taking account of global trends, DeLong marks 2010 as the year when the “slouch towards utopia” slowed to a crawl or stopped altogether. Either way, neoliberalism had gone from unchallenged hegemony at the turn of the twenty-first century to full retreat twenty years later.

So far I’ve focused on the period of neoliberal dominance that began with the breakdown of Keynesianism in the early 1970s. This framing exactly fits Edwards’s book, which begins with the Chilean military coup of 1973. For DeLong, though, neoliberalism was the second act in a drama that began in the late nineteenth century. During that hundred-year first act — about which he writes as an economic historian rather than a participant — economic life was utterly transformed for the majority of people on the planet.

The story begins in Western Europe and its offshoots, most importantly the United States, and it is on the latter that DeLong focuses most of his attention. He chooses 1870 as his starting point because that was the year when “invention was invented” with the creation of industrial research laboratories. These enabled inventors to focus on innovation rather than an endless, and often futile, effort to commercialise and license their inventions. Surprisingly, despite being affiliated with the University of California Berkeley, home to twenty-six Nobel prize winners and alma mater of dozens more, DeLong doesn’t mention research universities, which provided the basic science underlying most of these inventions.

As his title suggests, the subsequent century saw remarkable progress that nonetheless failed to create the utopia many believed could emerge from the massive improvements in technology. Instead, the century was consumed by disputes over how to organise societies and economies — ferocious and bloody disputes in the first half of the twentieth century followed by an uneasy peace under the threat of nuclear annihilation.

DeLong personifies the schools of thought within the capitalist world as being those of Hayek (“The market giveth, the market taketh away; blessed be the name of the market”) and Karl Polanyi (The market was made for man, not man for the market). More prosaically, while Hayek opposed all forms of government intervention in the economy as a “road to serfdom,” Polanyi argued that people “had rights to a community that gave them support, to an income that gave them the resources they deserved, to economic stability that gave them consistent work.”

Within this schema, the decades following 1945 (Les Trente Glorieuses, as the French call them) can be seen as the period in which this tension was resolved by the combination of Keynesian macroeconomic management and the social-democratic welfare state. Hayek was victorious in the campaign against comprehensive economic planning but not in his opposition to large-scale public provision of health, education and infrastructure services of all kinds.

Polanyi’s views seemed to gain ground during Les Trente Glorieuses, with the size and scope of the state growing steadily. In the cold war setting of the mid twentieth century, many expected that the rival economic systems of capitalism and communism would converge to a “mixed economy,” with most large businesses owned or tightly regulated by governments, and market forces ruling elsewhere.

But the tables were turned in the space of a few years. Hayek triumphed in the 1970s, both in DeLong’s symbolic terms and as the intellectual star of the decade. Financial markets were deregulated, public enterprises privatised and unions crushed. The era of neoliberalism, which forms the second part of DeLong’s story, had begun.

This account leaves DeLong, and his readers, with two big problems. First, did technological progress really cease to work after 2010 and, if so, why? Second, why was a relatively short burst of high inflation enough to overthrow social democracy yet decades of poor economic performance insufficient to generate an alternative to neoliberalism?

On the first question, I am a bit more optimistic than DeLong. The twenty-first century has seen huge growth in the volume of information distributed through media of all kinds. Unlike traditional goods and services, information is a “non-rival” product: making information available to one person does not reduce the amount available to everyone else. But the infinite capacity for reproduction also makes it hard to force people to pay for information. The most common, though highly unsatisfactory, solution is to attach useful information to advertising people would not otherwise choose to look at.

In these circumstances, traditional measures of output, income and consumption become less and less relevant. At least in countries where most people have access to a basic twentieth-century set of household goods and to a variety of personal services, it may be that future improvements in living standards will come almost entirely from access to information provided outside the market.

On the second question, DeLong argues, correctly I think, that social democracy was a victim of its own success. Everyone expected accelerating growth in their incomes combined with a continuation of full employment and low inflation. When the system failed to deliver at quite the expected level, neoliberalism promised a return to prosperity. By the time it became clear that this promise would not be realised, expectations had been lowered so much that (for example) a 5 per cent rate of unemployment was seen as a success rather than the disaster it would have been perceived as in the 1970s.

Again taking the optimistic view, we are seeing a gradual rehabilitation of the institutions of the mixed economy, including activist governments, public enterprise and trade unions. At least for the moment, we don’t have to worry that our limited successes will recreate the hubris of the 1960s. Perhaps we can finally put the era of neoliberalism behind us. •

The Chile Project: The Story of the Chicago Boys and the Downfall of Neoliberalism
By Sebastian Edwards | Princeton University Press | US$32 | 376 pages