Lila Abu-Lughod set out to discover “why the emerging Western common sense about Muslim women did not capture what I knew from experience and from reading history.” Shakira Hussein reviews her new book 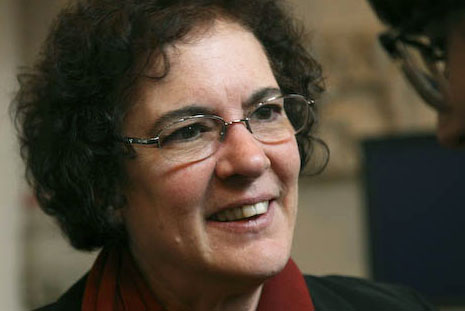 THE TITLE of Lila Abu-Lughod’s new book poses a challenge to what she terms “the new common sense” view of global women’s rights. For many commentators in the immediate aftermath of the 11 September 2001 attacks on New York and Washington, the self-evident answer to Abu-Lughod’s question was, “Of course they do – and George W. Bush, Tony Blair and (for Australian observers) John Howard are the right men for the job.” The US-led military intervention in Afghanistan was not only about seeking retribution against terrorists – it was also about saving Afghan women from Taliban oppression. Feminist Majority and other prominent women’s organisations endorsed the call to arms.

Abu-Lughod’s Palestinian family background and her years of anthropological research in an Egyptian village didn’t incline her to endorse this rescue mission, nor the discourse that underpinned it. Instead, she “embarked on a project to articulate why the emerging Western common sense about Muslim women did not capture what I knew from experience and from reading history.”

Over a decade later, Do Muslim Women Need Saving? provides a sweeping overview of what she found, drawing on material ranging from Laura Bush’s post-9/11 radio address proclaiming the US-led intervention in Afghanistan as a victory for Afghan women, to the genre that Abu-Lughod calls “pulp non-fiction,” to reports on women’s rights from non-government organisations. She contrasts this discourse with the stories of the Muslim women she has come to know over decades of research – women who angrily reject the suggestion that their religion is a source of oppression.

Abu-Lughod chooses not to provide a yes-or-no answer to her title’s question, but rather to analyse the various purposes for which the issue of Muslim women’s rights (or lack thereof) have been deployed. In questioning this new common sense, she doesn’t deny the widespread oppression suffered by Muslim women. During the course of her fieldwork (and in her own family life), she has witnessed the grief and injustice suffered by many Muslim women. But, as she explains, the need to “save” Muslim women has been used much more widely to justify military attacks on Muslim societies and to stigmatise Muslim communities located in the West as well as marginalised communities within Muslim-majority societies.

The book becomes increasingly complex as Abu-Lughod tracks the language of Muslim women’s rights across a global network of societies, institutions, organisations, texts and lives, both Muslim and non-Muslim. Australia has been an active participant in this network of salvation – as a contributor to the US-led military intervention in Afghanistan, as a base for the young Jordanian-American woman Norma Khouri at the time her hoax honour-killing “memoir” Forbidden Love was published, and as one of the jurisdictions to introduce legislation targeting forced marriage. Abu-Lughod’s book highlights the ways in which such endeavours are variously self-interested or misplaced, with effects ranging from counterproductive to outright destructive. In so doing, she questions the status attributed to values such as choice, consent and freedom.

This is a more complex line of thought than conventional defences, which tend to argue that Muslim women perform various aspects of their religious identity by choice. As Abu-Lughod notes, choice in all societies is socially mediated, and consent is hemmed in by boundaries both visible and invisible. Yet our concept of “freedom” has been reduced to a binary definition according to which “we” enjoy its benefits while Muslim women are deprived of them. Such individualist definitions of liberty fail to take account of the value that women may place on aspects of their lives such as obligation, duty, and their place in their families and communities.

Abu-Lughod’s discussion of forced marriage is particularly timely for Australian readers. Legislation criminalising forced and servile marriage passed through federal parliament with bipartisan support in 2013, following the introduction of similar measures in Europe. Abu-Lughod places such measures against the background of what she terms “literary trafficking” – sensationalised and “(porno)graphic” accounts of forced marriage and honour-based violence. Norma Khouri’s Forbidden Love (published in the United States as Honor Lost) is the most notorious of these memoirs. Her account of the murder of her best friend in an honour killing in Jordan became an international bestseller before being exposed as a literary hoax by the Sydney Morning Herald’s Malcolm Knox.

Khouri’s level of deceptiveness may be exceptional, but she catered to a widespread appetite for testimonial accounts of the horrific abuse of women by menacing Muslim men in exotic locations. These sites are no less exotic when represented as fragments of Pakistan or Morocco displaced into the suburbs of Britain or France. Abu-Lughod claims that this pulp non-fiction allows a predominantly non-Muslim female readership to experience a sense of faux-sisterhood across cultural boundaries and to avoid any sense of culpability for the deaths and displacement of Muslims as a result of Western imperial interventions. They also play an important role in “the politics of European immigration” by appearing to justify the exclusion and disciplining of delinquent cultures.

Abu-Lughod doesn’t claim that all violence against women committed by Muslim men is a fantasy dreamed up by the likes of Norma Khouri and Laura Bush. Rather, she dismantles the cultural framing of such crimes, which sees them as both endemic in and specific to Muslim and other marginalised communities. Abuse committed within mainstream communities is not regarded as symptomatic of anything beyond the particular circumstances of the individuals concerned. When such abuse occurs in marginalised communities, however, collective measures are regarded as both appropriate and necessary. Abu-Lughod could be describing the representation of violence against women and children within Aboriginal communities in the Northern Territory when she notes that “these incidents are not to be considered as individual aberrations or pathologies but as patterned forms.” And like Muslim communities in Europe, Aboriginal communities in Australia have been singled out for discriminatory measures as a result.

WHEN she denounces cynical exercises such as the Bush administration’s mission to rescue Afghan women or fraudulent bestsellers like Forbidden Love, Abu-Lughod is on relatively uncomplicated ground. She treads more carefully when critiquing the work of Muslim feminist activists whose courage and commitment to their cause she acknowledges, even as she notes the limitations of their work. Her overview of feminist activism in both Muslim-majority societies and Muslim-minority communities in the West provides an insightful analysis of the complex negotiations its practitioners undertake (or refrain from undertaking) with government bodies, non-government organisations and corporate sponsors. In her view, educated, urban Muslim women (both secular and religious) who set out to rescue women at the margins of their societies risk replicating the same lack of insight that American feminists displayed in their campaign to rescue Afghan women from the Taliban.

Muslim elites have used the same tactics as imperial invaders in deploying the issue of women’s rights as a pretext for the surveillance and disciplining of marginalised communities. Abu-Lughod’s discussion of Muslim feminists therefore continues her project to track “what various forms of rights work produce in the world by way of careers, social distinctions, public discourse, new social and financial circuits, documents, legal debates, travel opportunities, intellectual excitement, and even hope.”

In the decade before its overthrow, the Mubarak regime in Egypt established a National Council for Women led by the then-president’s wife, Suzanne Mubarak. As the recipient of significant government and international funding, the organisation was able to co-opt the agenda for women’s rights projects in Egypt during this period, sidelining organisations and individuals who were out of favour with the government. Alongside this governance feminism, Islamic feminism rose to prominence both in Egypt and in Muslim communities around the globe.

As Abu-Lughod relates, Islamic feminism seeks to establish the compatibility of Islamic jurisprudence with universalist projects such as the UN Convention on the Elimination of All Forms of Discrimination against Women. This brings Islamic feminists into conflict both with those Muslims who deny their entitlement to interpret Islamic texts and with those in the West who denounce Islam as inherently and irredeemably patriarchal. Abu-Lughod is impressed by the energy and respectful tone of the Islamic feminists whose meetings she observes in New York.

Islamic feminists address the issue of violence against women within Muslim communities by attributing it to “unIslamic” cultural practices, however. Again, Abu-Lughod finds the language of rights inadequate as a mode of analysis. In her view, attributing violence against women to “traditional” culture is as misplaced as is blaming it on religion. “There is a profound incommensurability between the lives of these particular ‘grassroots’ women I knew and the terms in which they are being imagined in the field of rights, including Islamic feminist versions.”

Abu-Lughod’s discussion of these “grassroots women” maps what she terms “the social life of Muslim women’s rights” as they are defined, debated and enacted through multiple channels. Her interviewees don’t restrict themselves to a single language of rights but use a hybrid discourse derived from sources both religious and secular, global and local. Some identify the state as a source of oppression, while others describe state-sponsored progress on gender issues and state institutions as a means by which wronged women may seek redress. Similarly, local male community elders may be a source of both oppression and support.

I fully endorse Abu Lughod’s chosen path of listening to Muslim women rather than lecturing to and about them and dismissing their responses as so much false consciousness if they do not tally with Western feminist norms. But listening to such women during the course of my own fieldwork (far less extensive than Abu-Lughod’s) presented me with the dilemma of how to respond adequately to stories of immediate, concrete deprivation. Many of the Afghan and Pakistani women I interviewed during my own fieldwork described their urgent need for resources that I could not hope to provide – medical treatment for themselves and their families, a clean water supply, a safe place to shelter. The lure of governance feminism, with all its resources and power and connections, can feel very powerful at such moments.

For many of my interviewees, the need to be heard is as urgent as the need to be fed and sheltered. Some of what they had to say was related in confidence, but on other occasions I was urged to “tell them what is happening to us.” And by “them,” I don’t think my interviewees were referring to the tiny audience of a feminist talkfest in Sydney or Melbourne, or to the modest readership of Inside Story, for that matter. They meant the world – or at least a critical mass of those who vote for the leaders whose decisions damage Muslim women in the supposed attempt to rescue them. And as Abu-Lughod illustrates, it is almost impossible to make oneself heard over the background noise of bestselling pulp memoirs and horror stories of oppressed Muslim women.

I am not insulated, then, from the process of negotiation and juggling that Abu-Lughod describes as the social life of Muslim women’s rights. Neither, of course, is Abu-Lughod herself. She refrains from replicating the simplistic advice mandated by the rescue missions she critiques, instead suggesting that her readers “look and listen carefully, think hard about the big picture, and take responsibility.” Abu-Lughod’s book provides a good starting point for this process of looking and thinking – not to mention taking responsibility. •

Shakira Hussein is the McKenzie Postdoctoral Fellow at the National Centre of Excellence for Islamic Studies in the Asia Institute at the University of Melbourne.