This could be the end of the Liberal Party as we know it, argues Geoffrey Barker 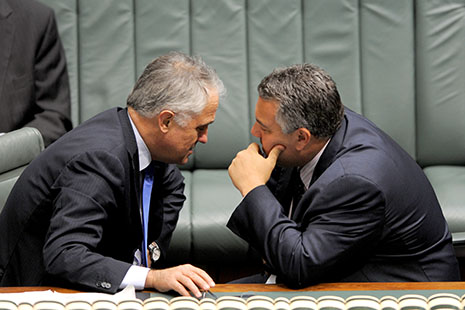 WITH THE CRISIS that has unhinged the Liberal Party and doomed Malcolm Turnbull’s leadership we may be witnessing the end of the Menzies era in Australian politics. It now seems that Australia’s non-Labor political forces are facing historic realignments arising from their turmoil over climate change.

Most obviously, relations between the Liberal and National parties will be much looser given the Nationals’ hostility to any climate change legislation. But perhaps more significantly, divisions between conservatives and liberals within the Liberal Party are now so visible and so entrenched that the party faces permanent strain and possibly even the emergence of a new breakaway party of the right.

Such an outcome would bring down the curtain on the era that started in 1944 when Robert Menzies called together the shattered United Australia Party to establish the Liberal Party at a conference in Albury. The Liberal Party has always contained conservatives and liberals, but electoral success and ruthless leadership have ensured that strains have been contained. It is now hard to see how the strains will continue to be manageable – especially with the non-Labor forces facing prolonged opposition in Canberra.

Climate change has exposed fundamental cleavages between liberals and conservatives. Liberals (of whom Turnbull is one) accept the reality of global warming and believe that they cannot responsibly ignore the issue. Conservatives remain sceptical and have shown they are prepared to take the party over the cliff rather than acquiesce in the compromise legislation negotiated on Turnbull’s behalf by Ian Macfarlane. The unprecedented mass resignations by conservative shadow ministers and others on Thursday revealed the depth of their hostility and determination and the seriousness of the crisis facing the party.

But while climate change (and Turnbull’s autocratic leadership style) have brought the Liberal Party to crisis, trouble has been brewing since the 1980s with the emergence and growing power of fundamentalist conservatives hostile to the party’s liberal commitments. Usually described as neoliberals, neoconservatives or “dries,” they support laissez-faire extremism in economic policies and tough authoritarianism in social policies.

Former prime minister John Howard was part of this movement. While he argued often that the Liberal Party remained a mixture of conservative and liberal political traditions, he encouraged conservatives and ignored liberals in the party ranks. Repeated electoral success allowed Howard to do so with impunity. Since his defeat by Kevin Rudd in 2007, the Liberal Party under Brendan Nelson and Turnbull has been unable to throw off the Howard legacy and establish a new identity. The conservative–liberal conflict was brought into sharp relief in George Brandis’s recent Alfred Deakin lecture, in which he argued vigorously against Howard conservatism.

Policy crises are not unprecedented in Australian politics. The Labor Party has split on three occasions over irreconcilable policy differences – in 1916 over conscription, in 1931 over economic policy during the great depression, and in 1954–55 over communism. Each of these splits kept Labor out of office for decades. The 1954–55 split saw the emergence of the Democratic Labor Party, whose preference votes helped keep Menzies in office for two decades. One question now is whether the Liberal Party will spawn a breakaway party.

The history of Australian non-Labor politics suggests that it is a possibility. According to the political scientist L.F. Crisp, the 1909 fusion of the Liberal Protectionists, led by Deakin, and the Free Traders, led by Reid, was “a marriage of convenience… an unhappy match.” Against the background of the first world war the Labor turncoat Billy Hughes founded the new Nationalist Party to oppose Labor. The Nationalist Party was reorganised in 1931 as the United Australia Party under the leadership of Joe Lyons, who had, with other right-wing MPs, quit Labor. The UAP fell apart over funding controversies, and in 1944 Menzies created the Liberals. They were to win every federal election from 1949 to 1969.

Perhaps the only significant disturbance to non-Labor unity was the emergence of Don Chipp’s Democrats in the mid 1970s, after Chipp had been ousted from Malcolm Fraser’s ministry. The Democrats are now a spent force without representation in Canberra. As Crisp has noted, “the Liberal Party works upon the basis of an oligarchy of a relatively very few key people. Upon their capacity to work together harmoniously and well, and with necessary sensitivity to important opinions in the community, depend the prospects of the Liberal Party.”

Those prospects are not bright. The party of Menzies has turned destructively on itself in an orgasm of rage and treachery on the issue of climate change, which scientific evidence overwhelming suggests will threaten the habitability of this planet. Turnbull’s leadership is doomed. He has been deserted by the senior MPs without whom he cannot present a credible alternative. The party has consigned itself to irrelevance on climate change and probably other issues as well. It faces the possibility of a split that would end the era of liberalism initiated by Menzies.

This is a gift for Labor. Kevin Rudd now seems assured of a second term of office and probably a third term. Voters will not quickly forget this disgraceful episode. But it is no gift to the nation. An effective opposition is vital to hold government to account and to highlight its swineries. At present Liberal MPs are highlighting only their own swineries, and good national governance is the loser. •