The sum is greater than the parts

A change of leader is the last thing the government needs 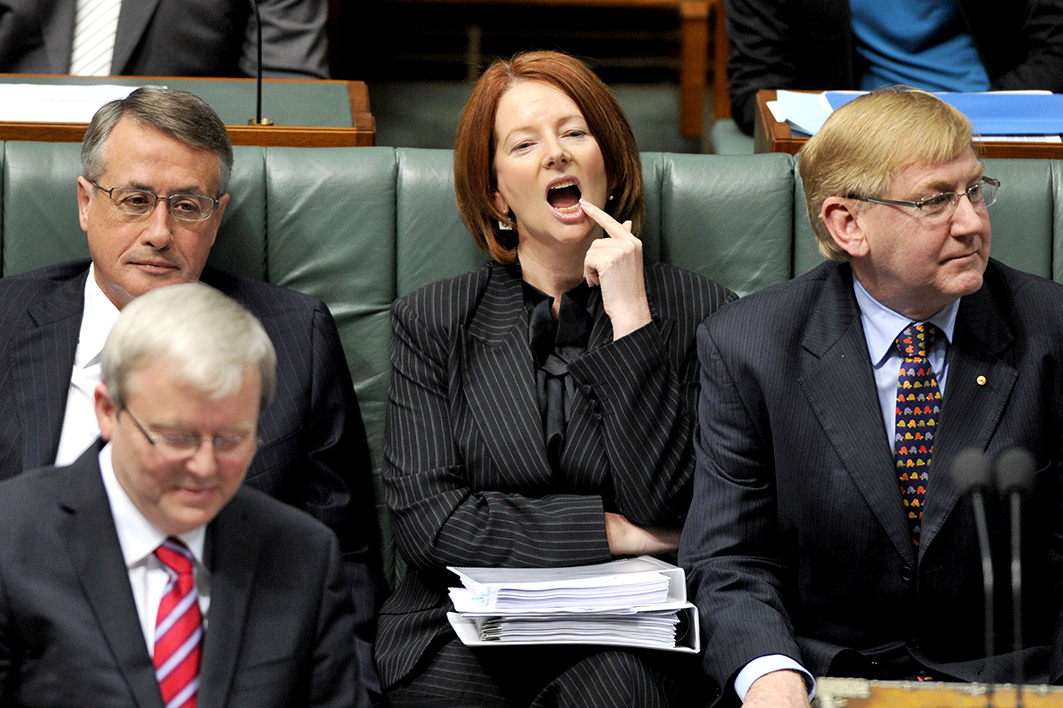 Let’s get this straight. The problem is a prime minister with a stubborn aversion to meaningful communication with voters, who might not believe in much anyway and just likes the job for its own sake. So the answer is… Julia Gillard?

A few ministers could be accused of having a go at explaining government policy to the electorate, but Gillard is not one of them. Perhaps we can blame the prime ministerial leash for this, and for the fact that we don’t really know what she stands for either.

But the real question is not whether changing leaders would increase the government’s chances of re-election. It is how otherwise sensible people can believe that it would.

In its quest for survival in 2010, this government has two big things going for it: new incumbency and Tony Abbott as opposition leader. They feed off each other; the sum is greater than the parts.

Abbott has given hope to Liberal supporters and sent Labor into a tizz. The government’s flaws, masked for so long by high poll ratings, are now obvious to all, and for this the Liberal leader must take credit.

But on voting day the key trade-off swinging voters will make is between any desire they might have to eject the incumbent and their judgement about how safe the alternative is. Sitting governments, whatever their faults, have predictability and security on their side. Voters know they won’t go mad. Which means that a main goal of oppositions must be to minimise perceptions of risk.

Forget mirages like “momentum” and “cut-through.” It’s not about which leader people like most, it’s about which one radiates security, economic prosperity and a hassle-free life. And of course it’s about any countervailing desire to throw out the government.

No matter what today’s opinion polls say, in 2010 it is difficult to see these elements combining to produce anything other than an easy Labor victory. Unless, that is, Labor trashes the equation by changing leaders. Then much of the benefit of incumbency would evaporate and you would have two untried contenders. It would even the contest.

Gillard is a brilliant individual and a warm and dextrous communicator. As Rudd’s personal oomph factor languishes in deficit, her quota overflows. She is very popular. So what? An election is not a charm contest. Abbott is more personable than Rudd, but as things stand he and his team comprise a fat target that will be at the centre of the campaign. If Gillard had been installed prime minister six or more months ago she would, as Rudd does, radiate safety and continuity. But if there is a change between now and the election, the focus will be on her.

Rudd’s record levels of approval never really meant he was “popular,” just that people thought he did a good job. The fall has been spectacular, but people probably now see him as a jerk rather than loathe him. Some current opinion polls have Labor in a losing position, but most governments get these jolts and most go on to win the next election.

In January, On Line Opinion’s Graham Young wrote in the Australian that at this election the then new opposition leader “may do surprisingly well… if voters don’t think he will win.” Thanks to the current polls, you can forget about that scenario. A surprise result, like Steve Bracks’s win against Jeff Kennett in Victoria in 1999, is now unlikely. As the government keeps reminding people, the possibility of an Abbott prime ministership is real.

Back in March this year, on ABC1’s Insiders, the prime minister delivered a presumably research-driven national mea culpa, apologising for leading such a bad government and promising to do better. Not surprisingly, this encouraged people to believe he leads a bad government and that the opposition and other government critics were right all along. Several other attempted circuit-breakers have malfunctioned just as badly, and he seems to have given that tactic away, which shows he can learn from experience. But changing leaders now would again trash the government’s record. How many times do the voters need to be told?

Political commentary is ultimately fuelled by opinion polls, and in the short term Rudd and his party need a decent Newspoll next week to end the leadership silliness.

And the longer term? Assuming they win, it seems reasonable to expect a replacement at the top some time. If I were Gillard I would do it sooner rather than later, because these stop-start economic times do not appear conducive to longevity. There will be no decade and a half of uninterrupted growth like that enjoyed by John Howard (and his overseas counterparts). Labor can probably expect two or three terms, and if the deputy waits too long she’ll end up a failed opposition leader like Peter Costello almost became or – possibly even worse – a tail-end prime minister like Gordon Brown.

So by all means sharpen the axe Julia. Just don’t wield it until after the election. •