The thorny politics of Indigenous recognition

Referendums don’t bring out the best in the Australian political system, writes Peter Brent. But that shouldn’t stop us from picking our way through the minefield 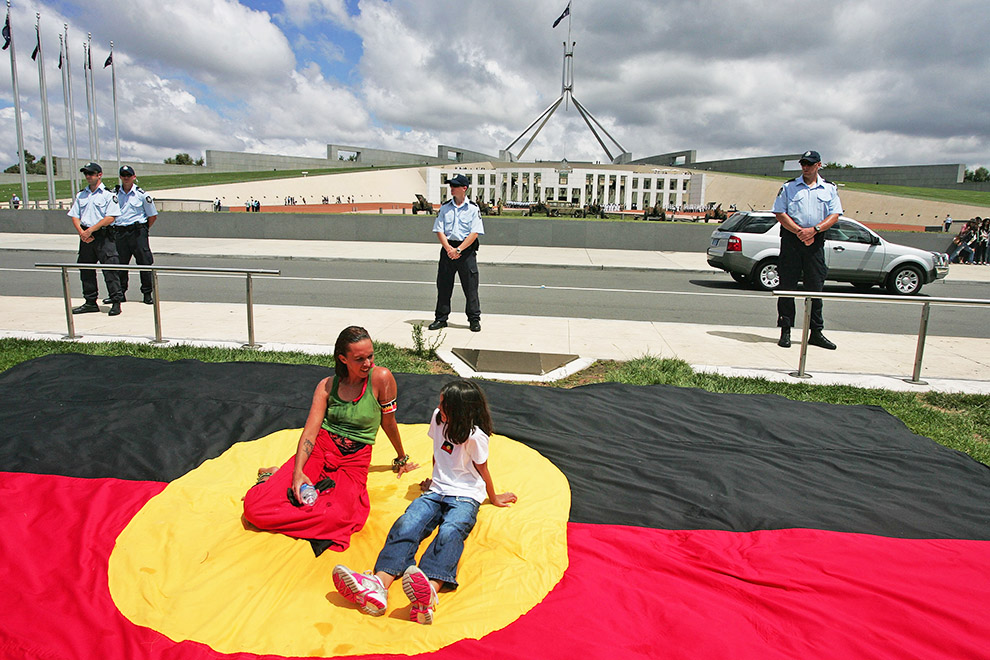 No Lindsay test: two Indigenous people in front of Parliament House after a march from Old Parliament House on 12 February 2008, the day before prime minister Kevin Rudd made the Apology in parliament. Anoek De Groot/AFP Photo

On the first day of parliament in 2008, newly minted prime minister Kevin Rudd delivered federal parliament’s Apology to the stolen generations. This had been Labor Party policy at the previous three elections, but hadn’t been given a particularly high profile during the campaigns.

Prime minister John Howard had always opposed the idea, and being a “conviction politician” he was never going to change his mind. Alone among living former prime ministers, he was not in Canberra on 12 February.

The Apology gave comfort to many Indigenous Australians and, in the wider community, provoked (mostly via the airwaves) an extraordinary and largely positive reaction. It was perhaps the only example of Rudd doing something that seemed less-than-popular, but which most Australians subsequently decided was for the best. They then gave the prime minister points for making them eat their greens: a textbook example of political leadership.

Labor wunderkinds Karl Bitar and Mark Arbib were not yet in Canberra, so their dreadful “Lindsay test” (thou shalt not do anything voters in the marginal Sydney electorate of Lindsay would not instantly approve of) was not yet in operation. And the Apology was just the sort of thing Lindsay focus groups could have been encouraged to be scared of. Imagine: “Some people have suggested an Apology would lead to large compensation payouts and might put your house at risk of an Aboriginal land claim – what do you think about that?”

For Rudd it was authority-building. His opinion poll ratings soared further. The Coalition was divided, and while it eventually supported the Apology, life was made difficult for leader Brendan Nelson – and his parliamentary speech showed it. Few Coalition MPs would now assert that going along with it was a bad idea.

But imagine if, for some reason, the idea of the Apology, and its wording, had first needed to be cleared by the voters at a referendum. That would have been a different story. The Coalition would have sniffed a potential political “win” and, as the campaign raged, the Liberal and National party rooms and their bases would have vented their hostility. The leadership would likely have ended up opposing it.

And with the wording picked apart and turned over for months, many Australians might have been encouraged to object to this or that phrase or word, or to become concerned by the legal ramifications. In the end it would have been easiest just to vote “no.”

Constitutional referendums are like that. They’re very difficult to get through.

Which brings us to yesterday, when the Joint Select Committee on Constitutional Recognition of Aboriginal and Torres Strait Islander Peoples delivered its final report on the proposed referendum. Like most committee reports, it contains a bunch of recommendations followed by a wide-ranging exposition of the considerations that went into them. There is much more discussion to be had, but this is going to be a very difficult referendum. They all are, but the challenges with this one are immense.

It’s all very well to point to overwhelming opinion-poll support, but most referendums begin with wide approval that gradually whittles away.

You can point to the massive success of the 1967 proposal all you like, but to most people at the time it was all about removing discriminatory clauses from the Constitution. Importantly, this was before Indigenous land rights came into being. Fears of Aboriginals staking claims on backyards, and resentment at perceived “special treatment,” if they existed back then, weren’t even a glint in the eye of those who would later adopt those grievances.

That referendum forty-eight years ago might have facilitated the land rights legislation that began the following decade, but it’s doubtful this occurred to many voters.

This is the question 91 per cent voted “yes” to:

DO YOU APPROVE the proposed law for the alteration of the Constitution entitled— “An Act to alter the Constitution so as to omit certain words relating to the People of the Aboriginal Race in any State and so that Aboriginals are to be counted in reckoning the Population”?

See how the most far-reaching element of that amendment, firing up the dormant “race power” to be used in Aboriginal affairs, was described as “so as to omit certain words.” Pretty sneaky, eh?

Of the forty-four constitutional referendums held since Federation, twenty-five were put by Labor governments and nineteen (including two in 1999 on which the government didn’t hold formal positions) by non-Labor ones. Of the eight successes, only one was Labor-proposed.

The fact that Labor governments put more radical proposals than the Coalition accounts for part of this lopsided record. But the main reason referendums are much more likely to succeed under conservative governments is that Labor MPs and supporters are, at DNA level, disposed to changing the constitution, and so Labor oppositions will usually support them.

The Coalition parties tend to be inherently antagonistic to this kind of change, and a Liberal opposition leader who is inclined to back a government proposal doesn’t generally possess the authority to drag his party along. A Liberal prime minister, by contrast, does. So the Liberals under Billy Snedden opposed “simultaneous elections” in 1974; three years later, in office, Malcolm Fraser supported it. And bipartisanship is necessary (though not sufficient) for a referendum’s success.

Tony Abbott has for years advocated Recognition, but does he possess the prime ministerial clout after February’s near-death experience? More than most leaders, he relies on his party’s conservative wing for support, and most of them, and most of the “base,” are violently against constitutional recognition of Indigenous Australians. And so, according to scuttlebutt, is Scott Morrison, the thinking person’s Tony Abbott, subliminally stalking the PM from his right.

It’s easy, and often lazy, to be pessimistic and cynical – but sometimes it’s realistic. And as many have suggested, a failed recognition referendum would be much worse than none at all.

The committee’s second recommendation is that the referendum “be held when it has the highest chance of success.” Assuming bipartisan support, that optimal moment is with a general election. It’s true that this timing would make bipartisanship less likely, but if it can be secured then the argument over the constitution would be overwhelmed by the main political contest. On the day, most people would probably just vote as their chosen party recommends.

If you think that sounds tricky, and looks like a less-than-glorious path to constitutional reform, don’t worry: we can tell tall tales about voters’ motivations afterwards. Our journalists and historians are highly accomplished at that.

Bipartisanship being close to impossible under a Labor government (for reasons already given) and with no guarantee the Coalition will get a second term, the 2016 general election is the way to go.

While remaining as agnostic as possible about the content – there is much discussion to be had, including, it’s to be hoped, at conventions of Indigenous Australians – it has to be said that the smaller the change, the more likely it is to succeed. A model that simply took out the two references to “race” and replaced the “race power” with what the committee calls a “people’s power” would meet the description of minimalist, and would please some people and disappoint others.

Cape York leader Noel Pearson has introduced an alternative route by strongly advocating the “Declaration of Recognition” suggested by “constitutional conservatives” (his words) Julian Leeser and Damien Freeman. This would sit outside the constitution but would be approved by (non-constitutional) referendum. As Leeser and Freeman told the committee:

Such a Declaration would have far greater cultural impact, and, decoupled from the Constitution, it would have greater capacity for rhetorical flourishes, sweeping statements, and soaring poetry, than anything which the legalistic structures of Australia’s Constitution must necessarily contain.

The committee didn’t go for that suggestion, but if that does end up being part of the model it would be best, in my humble opinion, not to hold a popular vote on it. If a referendum is not needed, don’t have one. Instead, ambitions could be set high in the legislative sphere: perhaps aim for two-thirds of federal parliament and, maybe, every state and territory one. (In other words, something resembling the American and Canadian constitutional alteration process.)

The Australian constitution is very difficult to change, and has remained relevant thanks largely to High Court creativity. Sometimes, if an object is immovable, the less energy and capital spent the better. The battle can be moved to friendlier terrain.

Referendums don’t bring out the better angels in Australian politicians. Parliaments, on occasion – if you blink you miss it – do. In the meantime, let the talks commence. •