The true story of Western Australia and the GST

The new rules sought by premier Colin Barnett would have cost the state $7 billion during the boom years, writes Tim Colebatch. Is this an attempt to make the current mechanism for carving up the GST unworkable? 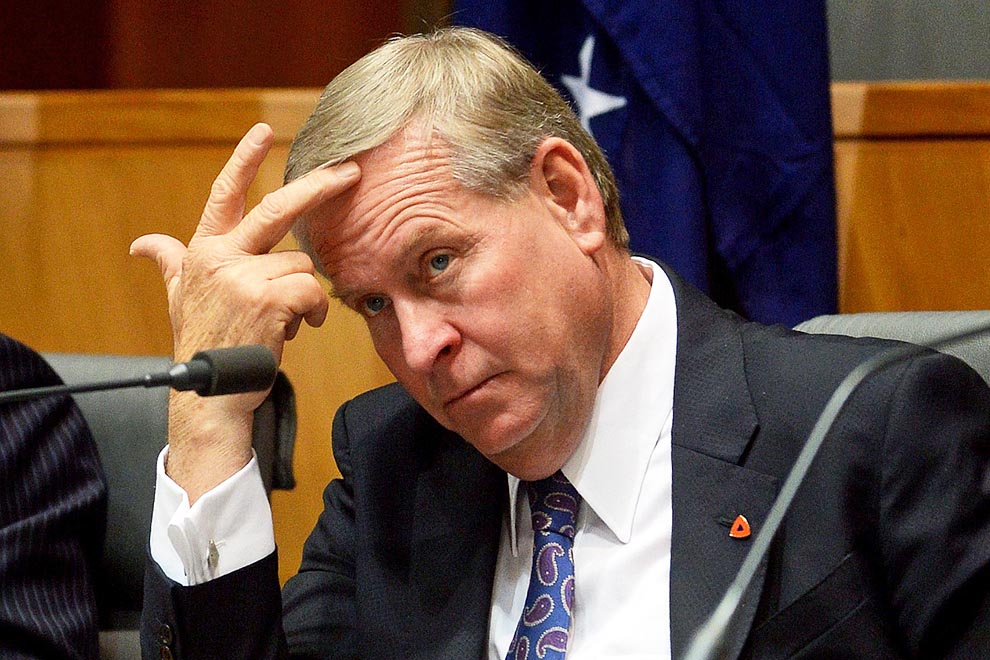 It sounds so unfair. Across Australia, the GST will give state and territory governments an average of $2370 for every resident next financial year. But the umpire has decided that one will get a lot more, some a bit more, some a bit less – and Western Australia will get just $714 per resident, 30 per cent of the national average.

Moreover, the decision comes as the WA budget is being clobbered by plunging iron ore prices. That could cost it $3 billion of revenue in the year ahead, a 10 per cent drop in its entire income. Not surprisingly, Western Australia wants to change the way the grants are calculated.

But hold your tears. As we will see, there are good reasons for the apparent injustice.

First, the rule Western Australia wants to change is the one that’s given it more than $7 billion over the past four years that would have gone to the other states if the GST money had been distributed in the way it now urges.

Second, the system it wants to overthrow – in which the Commonwealth Grants Commission proposes how federal money should be split among the states, based on their relative needs – has subsidised Western Australia by tens of billions of dollars (in today’s money) over the decades, and that money has come from the taxpayers of New South Wales and Victoria.

Third, Western Australia’s actions since 2011 suggest that once it saw that the system would begin working against its interests, it set about escalating the stakes to the point where the distribution of grants would seem manifestly unfair and the system would be scrapped.

Federal treasurer Joe Hockey is sympathetic to Western Australia’s plight. At a media conference last Thursday after meeting state treasurers, he said the state had been hit by “a perfect storm” – a poor GST deal combined with a plunge in iron ore royalties. While keeping his options open and weighing up the pros and cons of overruling the Grants Commission, Hockey’s closing words showed which way he was leaning:

Frankly, the fundamental question is: does it really help the Federation for the first time to have a state receiving 30 cents in the dollar from the GST that is contributed by its citizens?… It might be next year 20 cents, it might be less, but at what point do you say well, this is just a little bit unfair, particularly given what they are going through with their own royalty dropoff in iron ore?

Hockey is certainly right about the perfect storm. In 2013–14, iron ore royalties gave the WA government $5.3 billion, roughly 20 per cent of its revenue. Premier Colin Barnett and his ministers assumed the iron ore price would remain at about A$140 per tonne, and set about merrily spending money in all directions.

They were not the only ones who got it wrong. The Reserve Bank, federal Treasury and the mining companies all assumed that while iron ore prices had gone up in the lift they would, at worst, come down by the stairs.

Now the spot price has plunged to US$47 (a bit over A$60) a tonne. If it stays there, instead of raking in $6 billion in iron ore royalties next year, as it had anticipated, Western Australia will get about $3 billion at best. It has been prodigal in its assumptions and its spending. Now winter has come; the state government is out of money and so, like the grasshopper in Aesop’s fable, it is asking its neighbours, the ants, to give it some of theirs.

The problem is that the distribution of the GST revenues is a zero-sum game. To change the rules to give more money to one state means taking that money from other states. Hockey is entitled by law to overrule the Grants Commission’s judgement in this way, but no government has done so since 1981.

Hockey refuses to discuss his options publicly. But one change being considered is simply to maintain each state’s share of the GST at current levels. That would give Western Australia an extra $494 million in 2015–16, New South Wales an extra $517 million, the Australian Capital Territory an extra $129 million, and the Northern Territory an extra $56 million. The losers would be Queensland ($556 million), South Australia ($284 million), Tasmania ($225 million) and Victoria ($131 million).

But the politics of changing the Grants Commission’s recommendations are fraught: above all, because, as Hockey acknowledged, the commission and the other states have made a strong case for why Western Australia should not be given any more than recommended.

Essentially, the commission’s job is to propose how the $57.2 billion the GST is forecast to raise in 2015–16 should be split between the states and territories in a way that ensures each government has the same capacity to provide services to its citizens, whether it does so or not. To this end, the commission compares each government’s spending, cost structure and revenue base in minute detail, making thousands of estimates, then works out what each state needs from the GST to give it the same capacity as the rest.

Until recently, Western Australia had won heavily from this process for seventy years. It was never heard to complain how unfair it was that New South Wales and Victoria should have to subsidise it.

But then came the mining boom. Global iron ore prices doubled, trebled, quadrupled, then quintupled. The state’s iron ore royalties had already soared, from $305 million in 2003–04 to a forecast $2.7 billion in 2010–11, when premier Colin Barnett and then treasurer Christian Porter decided to bump them even higher.

One of the dumb things about Labor’s mining tax was that it reimbursed companies for the royalties they paid the states. That meant, in effect, that if a state raised the royalty rate, the Commonwealth, not the mining companies, paid the bill.

Barnett and Porter seized their chance. They abruptly ended the royalty concessions previously given to BHP and Rio, and doubled the royalty on iron ore “fines” (iron ore in powder form) to the same rate as on lumps of ore. In the four years to 2013–14, iron ore royalties almost trebled and the WA government enjoyed by far the highest per capita revenues in Australia.

Isn’t that what the Grants Commission is meant to even out? Yes, that is exactly what it is doing. The problem is that it bases its findings on an average of its estimates of each state’s relative needs over the past three years. For 2015–16, this means Western Australia’s entitlement is based on its relative needs in 2011–12, 2012–13 and 2013–14.

Barnett and Porter knew that, in effect, the money they raised from higher royalty rates would be theirs only for a few years, and then the Grants Commission would redistribute it away to the other states. The soaring iron ore prices meant that, even with no change in royalty rates, Western Australia’s revenues would be by far the highest of any state. Instead of receiving extra money from New South Wales and Victorian taxpayers, as in the past, it would replace them as the biggest donor state. Had iron ore prices remained in the stratosphere, as most forecast, its royalties would end up being shared with all the other states.

Instead of accepting that, they decided to raise the royalties much higher still, hoping to force a change to that system so they could keep most of the money. When they lifted the royalties in early 2011, Porter estimated that by 2014–15 Western Australia would get only 33 per cent of its per capita share of the GST revenue (in fact, it got 38 per cent). He knew something like this would be the outcome.

“So why did WA do it?” I wrote in the Age at the time. “I suspect it’s a deliberate strategy to change the Grants Commission formulas, by raising the stakes so high that they become politically unworkable.”

I was not alone in that view, and time has confirmed it. When Mike Baird as NSW treasurer and premier tried to get the states to agree to lower the exemption limit for online GST transactions – which Hockey estimates could yield them “billions” in extra revenue – Western Australia refused. It didn’t want to make the revenue cake bigger. It just wanted a bigger share of the cake as it is.

But isn’t it entitled to that bigger share? After all, as Joe Hockey says, 30 cents in the dollar is not much to get back, and its share next year could be even less.

No, says the Grants Commission in its report, with considerable force: “The Commission estimates that over the mining boom, prior to the reduction in its iron ore royalty revenues in 2014–15, Western Australia received around $7 billion additional GST revenue than it would have if fully contemporaneous assessments had been in place.”

The commission specifically warned against taking iron ore royalties out of the equation by which GST entitlements are assessed, saying that to do so “risks the coherence of the system as a whole.”

We can sympathise with current WA treasurer Mike Nahan, who has inherited his predecessors’ mistakes. But in the end, Hockey should tell Western Australia it has to deal with its own problems, as Victoria did in the 1990–91 recession.

It will have to cut some programs, put off some infrastructure works, raise some taxes and run a bigger deficit. Worse things have happened. And eventually, the Grants Commission formulas will rescue it, as they have done in the past. •

Despite the campaign against chief justice Tim Carmody, Queensland is stuck with him, writes Andrew Lynch. But future governments should draw the right lessons from the furore

Under fire: Queensland’s chief justice Tim Carmody (centre) during the swearing in of a new Supreme Court judge on 31 March. Courier Mail/AAP Image 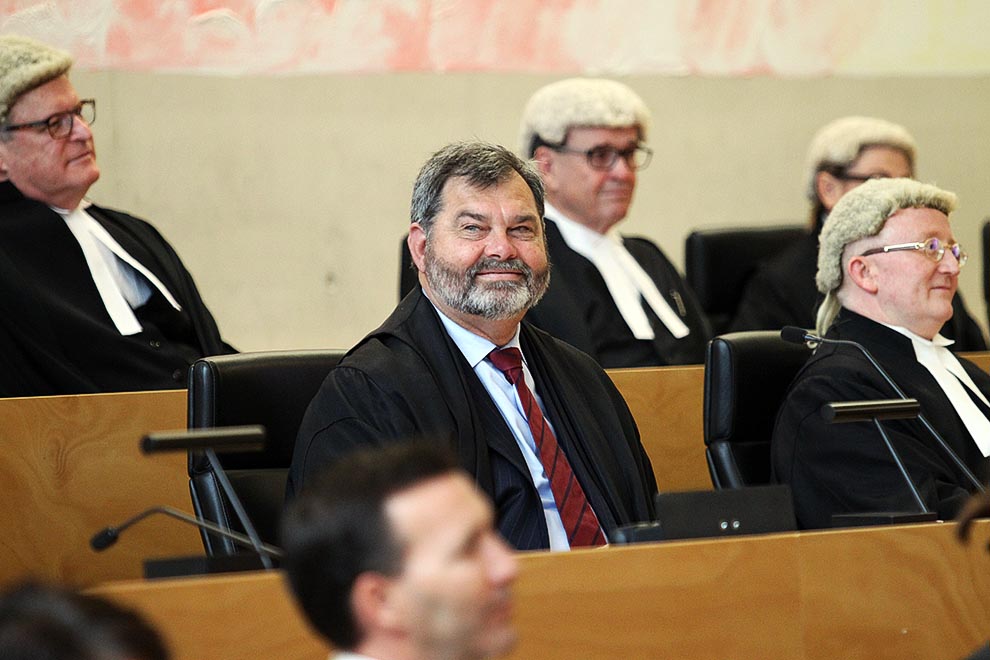 Under fire: Queensland’s chief justice Tim Carmody (centre) during the swearing in of a new Supreme Court judge on 31 March. Courier Mail/AAP Image