The watchdog that sometimes barked 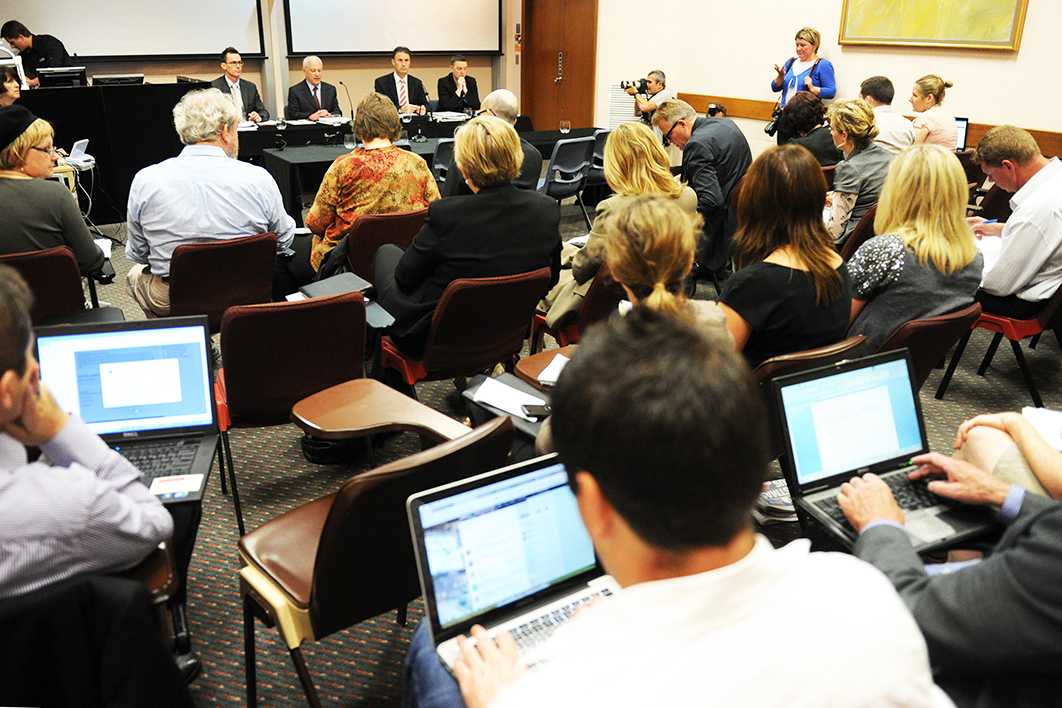 The winds of change are said to be blowing at the Australian Press Council. But don’t expect a gale — which is a shame, because change is sorely needed.

The APC, founded in the mid 1970s when the newspaper industry feared statutory regulation at the hands of the Whitlam government, remains the main forum to which readers can send complaints about the behaviour of newspapers and their associated websites. The APC simply expresses opinions; its member publications need only publish its adjudications.

The immediate reason for the breeze is that the Media, Entertainment and Arts Alliance, the main union covering journalists and media workers, has announced its intention to withdraw from the APC, where its representative sits alongside twenty-one other members, including industry nominees, independent journalists and members of the public. Under rules introduced a decade ago to protect the APC from tantrums by its funding members, the MEAA must provide four years’ notice before it can leave. This gives the APC the chance to persuade it to stay.

The immediate prelude to the MEAA’s action was a series of APC decisions about controversial cartoons in News Corp papers, but the union’s federal president, Marcus Strom, says they were not the cause. Rather, he says, the APC is no longer “fit for purpose” because it mainly covers mastheads with a history in print, though some online-only publications have joined in recent years.

Another spur for change is the departure of the APC’s executive director for the past seven years, John Pender. The headhunters looking for his replacement are being told that if quality candidates are to be attracted then the APC will have to convince them it is ready for change.

There are good reasons for cynicism. Ever since its birth, the APC has been trammelled by the interests and character of its dominant funders — the publisher members, and particularly the Murdoch organisation. According to the APC’s most recent annual report, covering the 2018–19 financial year, News Corp contributes up to 60 per cent of its $2.2 million in core funding.

Various attempts have been made to limit News Corp’s power, but money still talks. News’s relationship with the APC has been a marriage of convenience, paraded every time a government looks like considering statutory regulation of the media.

I am told that over the past decade News Corp executives on the council have effectively vetoed key appointments, both to the council itself and to employment within it. Behind-the-scenes talk says that the adjudication panels are being massaged to keep members likely to be critical away from the coalface. News Corp frequently attacks the council in its publications, and has published strong criticism of successive chairs.

A good way of summarising the APC’s history is to reflect on the record of the eight chairs who have attempted to lead it since its founding. The first, Sir Frank Kitto (1976–82), fell out with News Limited, as it then was, over its election coverage. News withdrew from the APC, kneecapping its funding. The second, Professor Geoffrey Sawer (1982–84), served only briefly, during the period when News was not a member, and thus avoided its ire. The third, Hal Wootten AC (1984–86), resigned immediately after the APC split fifty–fifty over his proposal to criticise Murdoch’s being allowed to take over the Herald and Weekly Times. The Australian Journalists Association (later part of the MEAA) also left at this time, together with many of the public members. It took decades for the APC to rebuild its credibility.

The fourth chair was Professor David Flint, a conservative lawyer, who was the only other chair not to have problems with News Corp. The fifth was Professor Dennis Pearce (1997–2000), who declined to serve a second term after News refused for several months to respond to APC communications about complaints. Pearce later told the Finkelstein media inquiry that the APC was overly influenced by fears it would lose its sponsors, which was one of the reasons Finkelstein recommended government regulation.

The sixth was Professor Ken McKinnon (2000–09) who wrote a blistering critique of News Corp in his final annual report. The publishers, led by News, had used funding cuts to end McKinnon’s publishing of regular reports about the state of the industry.

In the wake of all this, the APC’s public members flexed their muscles in 2009, leading to the appointment of Professor Julian Disney as chair — just as the phone-hacking scandal hit the headlines in Britain. The Murdoch organisation was on the back foot, particularly when the Gillard government appointed a local inquiry into media regulation led by Justice Ray Finkelstein.

Suddenly, News Corp saw Disney as its best friend. Daily Telegraph editor Paul Whittaker praised him in an open letter to readers arguing that the APC was doing the job very well and Finkelstein should be ignored. Disney was “fiercely independent,” wrote Whittaker. “The Press Council’s role has been strengthened significantly and this newspaper is committed to fully abiding by it.”

With the big stick of Finkelstein’s inquiry hovering over the industry, Disney managed to boost funding, introduce the four-year notice period on withdrawal, and steer through a new set of “general principles” against which complaints would be measured. He also began signing up new digital media players.

Finkelstein, unconvinced, recommended a statutory scheme of media regulation. But Labor communications minister Stephen Conroy instead introduced legislation that would effectively have made it compulsory for media to join self-regulation schemes that met government-mandated standards.

Cue outrage. Conroy featured on the front page of News Corp tabloids dressed as Stalin. The legislation failed — part of the sad history of the last days of the Gillard government. Soon Disney was under attack by News Corp, which was again threatening to withdraw from the APC, citing his “activism” and saying he had “gone too far” and was guilty of “mission creep.”

Disney was succeeded by Professor David Weisbrot (2015–17). After introducing some further reforms he became caught up in the controversy about the appointment of Carla McGrath, deputy chair of GetUp!, as a public member. Many people considered that appointment inappropriate, but what horrified Weisbrot was how decisions of the APC as a whole were misrepresented as his own. He resigned citing a campaign of “misinformation” by News Corp.

Which brings us to the current chair, Neville Stevens, a former senior public servant in the communications portfolio, who has been very quiet during the recent controversy. He declined an interview for this article, but the APC provided written answers to my questions.

Complaints to the APC are heard by an adjudication panel that includes community and media people, including some eminent names. Most complaints never get to formal adjudication; instead, one of the most useful things the APC does is resolve issues informally by contacting the publishers. Sometimes this results in a letter to the editor or a correction. In 2018, fifty-eight remedies were reached without adjudication, from a total of 736 complaints.

But when things do go to a formal process, justice is often delayed. One of the most recently published adjudications on the APC website, for example, concerns a December 2020 Herald Sun headline (and associated social media publicity) suggesting that six people had died as a result of the Pfizer Covid-19 vaccine. In fact, as the text of the article made clear, it was unlikely that the vaccine had caused the deaths. Pretty simple, and the APC found against the newspaper — but not until May 2021, six months after the publication and well after the damage was done.

If the winds of change really are blowing, then three main factors might help swell the breeze. Technological change is forcing a rethink of broadcasting regulation. Radio and television currently operate within conditions written into their free-to-air licences. With most “broadcast” media soon to be streamed, though, governments will lose this lever they use to set standards. That might increase the pressure for the APC, or a similar body, to go industry-wide.

Meanwhile, things have moved on from the Finkelstein inquiry, where the big publishers vigorously opposed any government intervention. Now, all have enthusiastically signed up to government grant schemes and the news media bargaining code. All the relevant legislation makes the benefits conditional on a commitment to standards, including through membership of bodies such as the APC.

Finally, the APC now includes a wider range of members, including the Schwartz stable of publications (the Monthly and the Saturday Paper), Crikey and others. (On the other hand, the Guardian Australia has declined to join.) They don’t have the clout or capacity of News Corp or Nine, but they do have a voice. And News and Nine wouldn’t want them to leave because that would further undermine the APC’s credibility.

What shape would change take? Adjudications need to come faster. Perhaps an ombudsman-type person could write regular reports, speedily, on controversial matters in the press. And perhaps the APC could act on its own, rather than waiting for complaints, when a media outlet behaves egregiously.

But don’t hold your breath. Unless the new executive director has a tough hide, is unusually dedicated and goes into the job with eyes wide open, it’s hard to see the APC having the mettle to fight for the necessary changes. •

Books & Arts Tell me, young man, are you a c-c-communist? Gideon Haigh 1 November 2022 Hired young by Keith Murdoch, Michael Cannon made his name as a journalistic roustabout and gifted historian
Close