Partnership: the presidential hopeful watches as Michelle Obama speaks during a primaries campaign stop in Noblesville, Indiana, in May 2008. Jae C. Hon/AP Photo 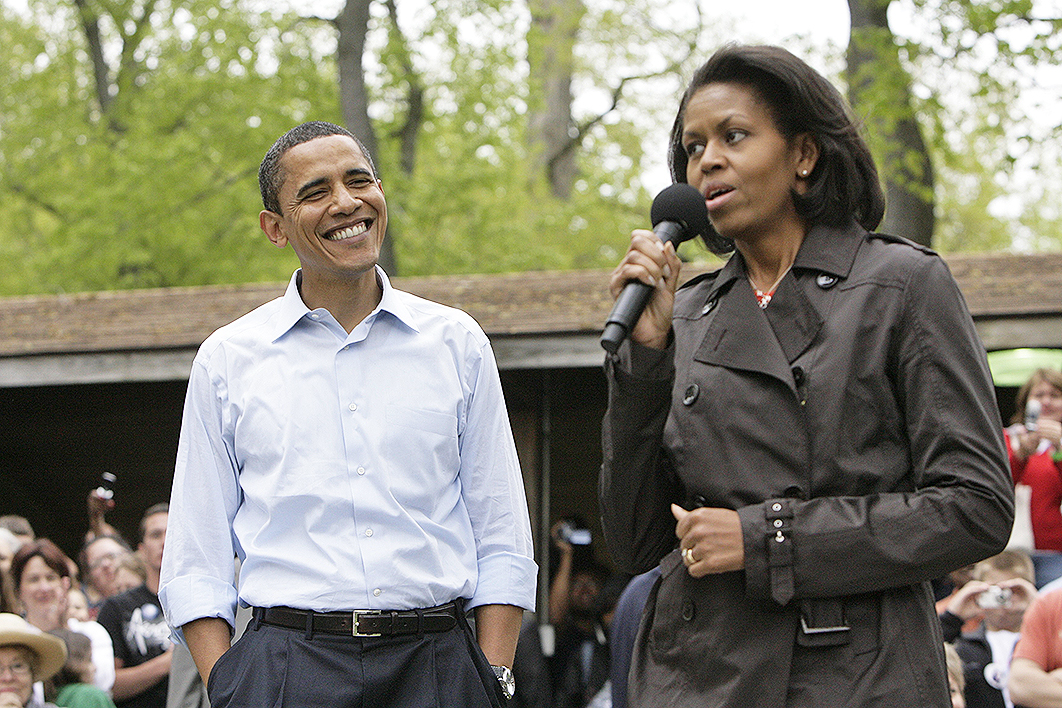 Partnership: the presidential hopeful watches as Michelle Obama speaks during a primaries campaign stop in Noblesville, Indiana, in May 2008. Jae C. Hon/AP Photo

Towards the end of her husband’s presidency, Michelle Obama made several visits to Chicago’s South Side. One came after the murder of fifteen-year-old Hadiya Pendleton, a high school student who’d played in her school band at Barack Obama’s second inauguration. The first lady attended Hadiya’s funeral and went back to speak to students at her school.

The important thing to remember here is that gun control was the signal issue of Obama’s second term. The horrific massacre at Connecticut’s Sandy Hook Elementary School at the end of 2012 was the catalyst, and for the next four years the president set his mind to curbing America’s epidemic of mass shootings. But by the end of that term, frustrated by the Supreme Court and a Republican House, it was clear the effort had failed, and nowhere more so than in Chicago’s South Side.

This is where Michelle Obama was born and raised, one of the distinctively black urban districts that grew in the wake of the Great Migration, when the descendants of slaves began downing tools and seeking safety and better work in the North’s first world war factories. For Michelle Robinson, as she was, the daughter of a municipal boiler inspector, the South Side was a close-knit community that for all its poverty still held the hope of advancement for children like herself. But by 2016 it had become a devastated ghetto, blighted by gun-escalated gang violence fuelled by the trade in crack cocaine.

A subsequent visit took her to a nearby suburb’s senior school, twenty-nine of whose students had been shot the year before, eight of them fatally. The staff there were doing everything they could to help students overcome their disadvantage, including hosting America’s first lady, one of their own. But the odds were stupendously high.

These were bright kids, both academically and in terms of street smarts. Some had witnessed murders, one had a brother who’d been partially paralysed by gunshot, some had parents who were addicts. Almost all of them had lost someone they knew to a gun. A simple weather report — “eighty degrees and sunny” — had them braced for the worst, for it was on these days that gang warfare was most likely to erupt, and they were most at risk of copping it in the crossfire. They pegged which streets to avoid coming and going from school, and maintained that the safest routes were in the middle of the traffic, walking single file between the cars and trucks whizzing in opposite directions, where the bullets couldn’t reach them.

Platitudes about American dreams were never going to wash with these kids. One came right out with it: “It’s nice that you’re here and all,” he said. “But what’re you actually going to do about any of this?” And America’s first lady had to give it to him straight, that they couldn’t wait for change because change wasn’t coming any time soon. There wasn’t going to be any money for their school, or legislation to keep them safe from guns.

“America is not a simple place,” she muses as she listens to them talking about all they had to do just to stay alive. “Its contradictions set me spinning. I’d found myself at Democratic fund-raisers held in vast Manhattan penthouses, sipping wine with wealthy women who would claim to be passionate about education and children’s issues and then lean in conspiratorially to tell me that their Wall Street husbands would never vote for anyone who even thought about raising their taxes.”

And there you have it. This is a book in which the ills of America stare you right in the face.

Still, we shouldn’t discount the achievement. After a blood-soaked history of slavery, civil war, lynching, civil rights struggles and gun deaths, America has had a black president. Not only that, he was a man married to a woman whose achievements when they met had outshone his own. Michelle was on partner-track in one of Chicago’s most prestigious law firms, Sidley and Austin, making more money than her parents even dreamed of. She had the cream of Ivy League credentials, having graduated from Princeton and from Harvard Law School. Then this somewhat geeky, one-time community organiser who had only just finished his first year of law entered her life and undid it all.

What brought them together in the first place was her being appointed his mentor at Sidley and Austin. It was unusual for a first-year law student to be taken on as an intern, but they seemed keen to get him. His Harvard law professor had written that he was the most gifted student they’d had, but Michelle wasn’t impressed. “In my experience, you put a suit on any half-intelligent black man and white people tend to go bonkers.” She doubted there was much to the hype. But soon she saw his qualities.

For one thing, he was a voracious reader, with a remarkable ability to retain what he read, over a range of fields. His experience had been much broader than hers, he knew where he wanted to go in life, and he eventually opened wider vistas for her. In important ways he was her antithesis, untidy where she was neat, late when she was punctual — differences to detonate a relationship — but they were mature enough to negotiate them. Above all, and right from the start, this was a partnership built on a deep, mutual respect.

Arguably, his influence was the stronger one. But, as the poet said, how can you know the dancer from the dance? Just by his risk-taking, he revealed to her that the “tick-all-the-boxes” lawyer’s life she’d fashioned for herself was the source of profound boredom and displacement. She quit the law and took up the work she needed. But it was her intelligent, methodical networking that found her the jobs that suited her, first at Chicago’s city hall, then as a community organiser, then for a South Side hospital.

As in all lives, there were challenges. Her father’s multiple sclerosis and eventual death was one, her miscarriages another. Both Obama daughters, Malia and Sasha, were IVF babies. Her husband’s insistent destiny was another. The pull of political life proved too strong for him to resist but was not without conflict for her; so much so that they turned to counselling. And she makes it clear that, despite the speculation, she has no intention of ever running for president herself.

Becoming is less a rags-to-riches tale than a humane and extremely intelligent insider’s take on the country she and her partner have so ably served. Yes, together they reached the top. But they got there just in time to wrestle with the biggest economic crisis since the Great Depression, when the nation’s coffers had been seriously depleted by the lingering effects of Reagan’s neoliberal agenda, the Bush administration’s wars, and the rise of the Republican Tea Party. What we believed at the time was a momentous change has proved an aberration. Sadly, Obama’s failures — the drones abroad, the guns at home — are nothing compared with what we are enduring now. Hope hasn’t totally been extinguished, and yet, as the author of this warm, insightful memoir shows, America is what it is. • 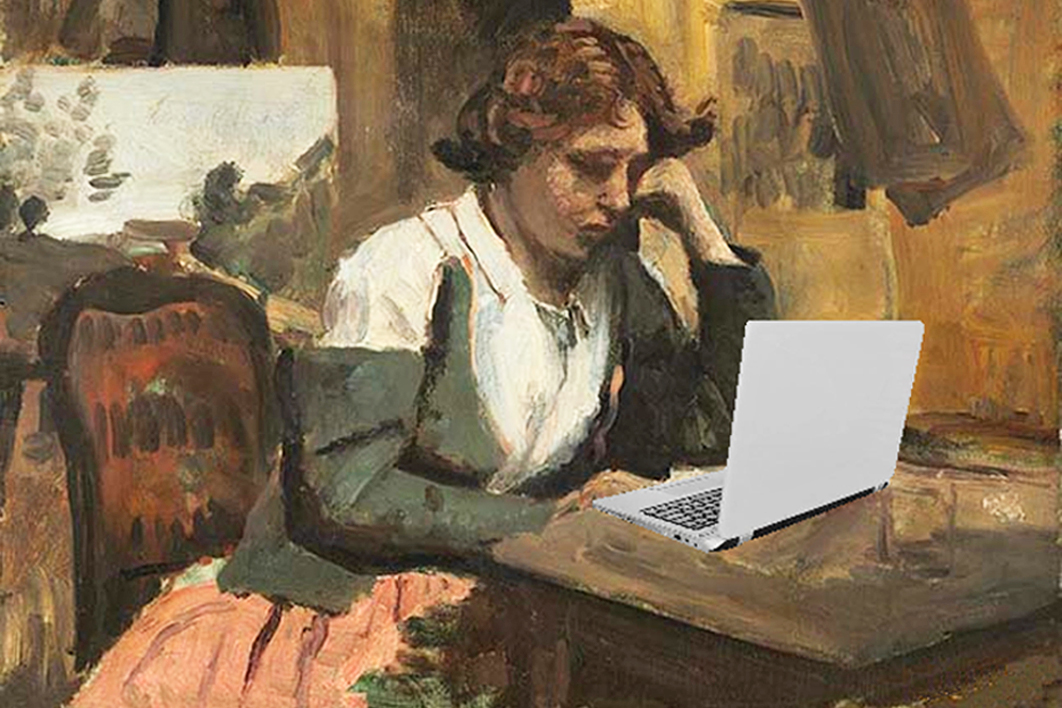