Through a glass, longingly 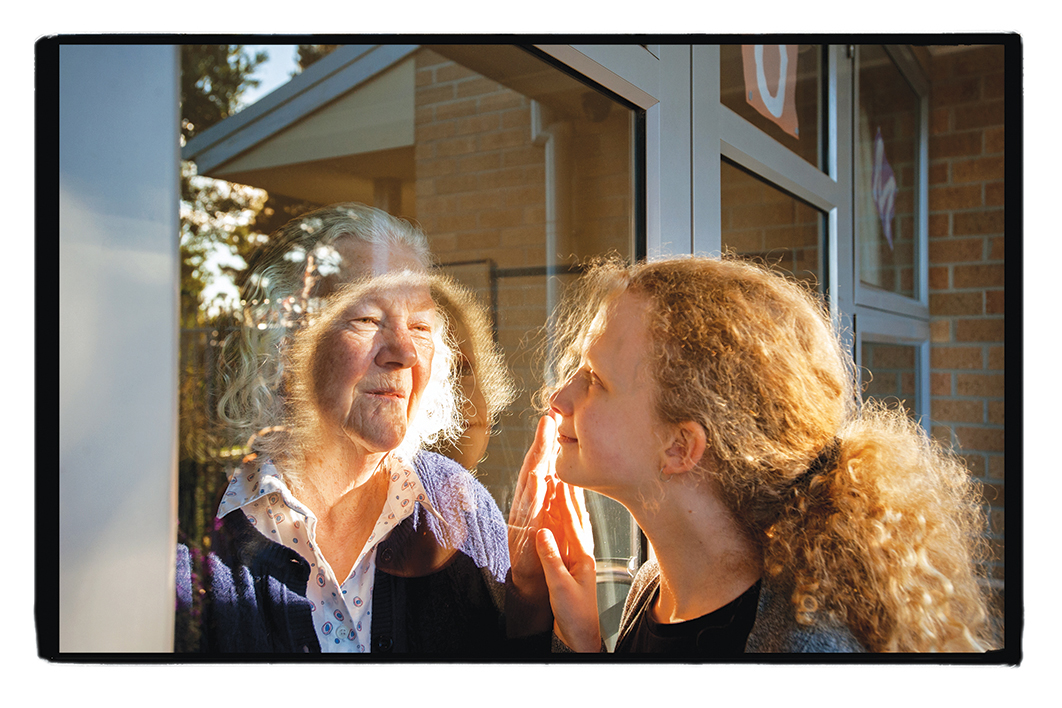 When the bushfires struck, the images struck too, with a force that was difficult to ignore. For the many Australians who may have smelt the smoke from afar but weren’t close enough to see the flames, photographic images conveyed much of their magnitude, and of what it must have been like to be there. Images captured not only the eerie light caused by smoke obscuring the sun, but also the real danger facing groups huddled on shorelines, or the devastating impact on native wildlife and people’s livelihoods.

But when fire was followed by pestilence, the question of how to convey the pandemic’s full impact was more complicated. For one thing, in a very literal sense, there was nothing to see — no orange flames to make the visual point, but rather an invisible virus accessible only to the most specialised branches of photography.

The question persists — a question, essentially, of where to point the camera — as photographers continue to explore ways of capturing the essence of what it has meant to live through the pandemic and witness, either from close-up or further away, its effects on our lives. When it comes to recording the physical effects of the virus, and the possibilities of hospitalisation and death, even the most intrepid of photographers has faced daunting restrictions, both ethical and practical.

Access to intensive care units, for example, is no straightforward matter, particularly in a time of heightened hygiene protocols. When granted, the effect can be powerful, as in Kate Geraghty’s series of photographs of the ICU ward at St Vincent’s Hospital in Sydney, taken earlier this year for the Sydney Morning Herald. Here, seriously ill patients are shown being monitored by watchful staff and multitudes of screens.

Other, more day-to-day, obstacles are perhaps insignificant in themselves but cumulative in their effect. In many cases they are largely psychological, a consequence of the new climate of boundaries and protocols and rules, and of a new wariness of intruding on other people’s privacy and space.

But sometimes the restrictions can be more substantive. The Greek-Australian photographer Angelos Giotopoulos recalls his time in quarantine during a recent visit to Australia for urgent family reasons. “I opened my door to photograph the corridor and immediately received a stern phone call reminding me that I was only able to open the door to pick up food, sheets or laundry.” In this case the photographer is being photographed to ensure that he doesn’t step outside the new boundaries.

In the early days — way back in the first half of 2020 — many images invited us to look anew at scenes of everyday life, and particularly at spaces both empty and occupied. Photographs of rows of empty seats — in buses and planes and theatres and restaurants — began to appear in force, signifying how ordinary life, where people routinely travelled to work and ate out and went to the cinema, had dramatically slowed down and even in some cases come to a halt. Outdoor crowd scenes, by contrast, captured at concerts or in parks, carried a new hint of threat lurking in all that human proximity, though their impact lessened over time as we became more aware of the relatively low risk of transmission in the open air.

If they are to count as commentary on the pandemic, images of spaces, empty or crowded, rely for their impact on context. In normal, non-Covid times, theatres and cinemas are empty for long stretches, even during hit runs, and buses continue to operate outside the busy peak hours, often with only one or two passengers. By the same token, crowded beaches were and will continue to be part of everyday life. It is the context of the pandemic — the explanatory caption — that makes the difference to how the image is perceived.

The impact of these photographs, or rather their impact as pandemic photography, may lessen over time as the scenes they depict become “re-normalised” and the images themselves come to be seen as insufficiently distinctive as a record of the uniqueness of living through the pandemic.

Given that a pandemic is difficult to photograph directly and straightforwardly, many Australians recognised early the importance of encouraging a varied visual record derived from a wide variety of photographers with differing perspectives and emphases. Local and regional competitions sprang up all over the country, inviting photographers — a category that nowadays is coincident with pretty much the entire population — to submit their own takes on the impact of the pandemic on themselves and their communities. Libraries established distinct projects, and galleries commissioned works and staged exhibitions, contributing to what is now already a vast archive for future generations to explore and ponder.

If one common theme emerges across all these photographs, it is the theme of isolation: hands placed up against glass, people sitting alone on park benches or wrapped Christo-like in masks and protective clothing, children learning from screens, and people queueing just too far apart to comfortably strike up a conversation.

Mass Isolation Australia, a project launched in early 2020 under the auspices of the Ballarat International Foto Biennale, was quick to pick up on this emerging theme and to “invite Australians to share photographs of their experiences in isolation.” Of the almost 13,000 images submitted to the project, 500 have been selected by curators Amelia Saward and Shaohui Kwok and may be viewed via @massisolationaus on Instagram. Several hundred of these images will appear in a new book, Mass Isolation Australia, to be released in January, and a selection are on view in Ballarat until 9 January.

The project’s title alludes somewhat self-consciously to the culturally influential Mass Observation project initiated in Britain in the 1930s, which sought the written observations of volunteers on a wide variety of topics coming under the rubric of ordinary life. In tune with our visually oriented times, Mass Isolation invites photographic rather than written contributions, and its subject is more specific than the original project to which it refers. But the emphasis on ordinary, daily life is the same. This is not a visual record of high-end laboratory research or the back and forth of meetings and briefings that go towards formulating pandemic policy. It is a record of daily impacts as experienced, either directly or at a remove, by everyone. 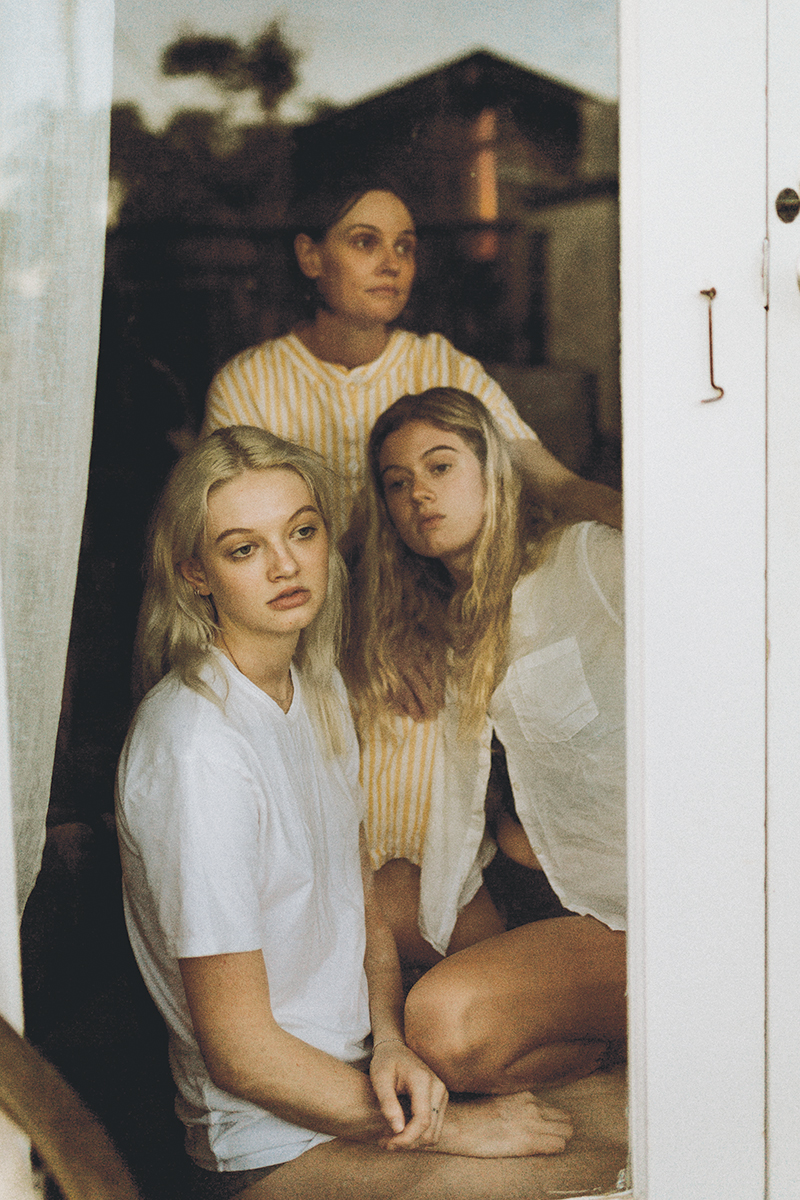 Lisa Sorgini’s Matilda, Indigo and Beck at Their Front Door.

The curators divide the photographs into categories including Empty Streets, which is self-explanatory, and the New Normal, which embraces images of queues, masks, grounded planes, admonitory signs and yes, rows of empty chairs. People are frequently captured in moments of reflection, as they sit at tables alone, or at their windows, “gazing through the glass longingly,” their expressions betraying feelings of uncertainty and of disconnection from the ordinary flow of life.

It is no surprise that the view through glass features so prominently in the photographic record of the pandemic. The architectural critic Tarō Igarashi, director of the splendidly named Windowology Project at the Window Research Institute in Tokyo, has spoken of how windows, both metaphorical and literal, have played such a crucial part in our experiences of being governed by the new rules and restrictions, fuelling a surge of photographic images based on the metaphor of looking through windows.

“‘Windows’ of the new era, such as our personal computing devices” provide an alternative form of connection in times of social isolation, says Igarashi, while “actual windows have also played a unique role in the crisis,” allowing us to communicate safely and to look out on a world that we are constrained from entering freely. These same windows also allow the photographer to look in.

Included in the Mass Isolation book are several examples of this focus. In Lisa Sorgini’s Matilda, Indigo and Beck at Their Front Door, three women convey by their poses and expressions a complex mixture of proximity and separateness as they gaze out through the glass door of their home in distinctly different directions. Sandy Scheltema’s Hugs on Hold, Alice Sarah-Lay Greets Her Grandmother Margaret Wheeler at the Trentham Aged Care Facility presents a more deliberately affecting, highly composed image that speaks to the many people who found themselves suddenly and unexpectedly cut off from direct contact with their families. And Viki Petherbridge plays with the long line of storefront photography from Eugène Atget to Vivian Maier with her Self Portrait with Vandalism During Lockdown, an image of disorientation and uncertainty that conveys something of the personal and social stresses imposed by lockdown-induced isolation. 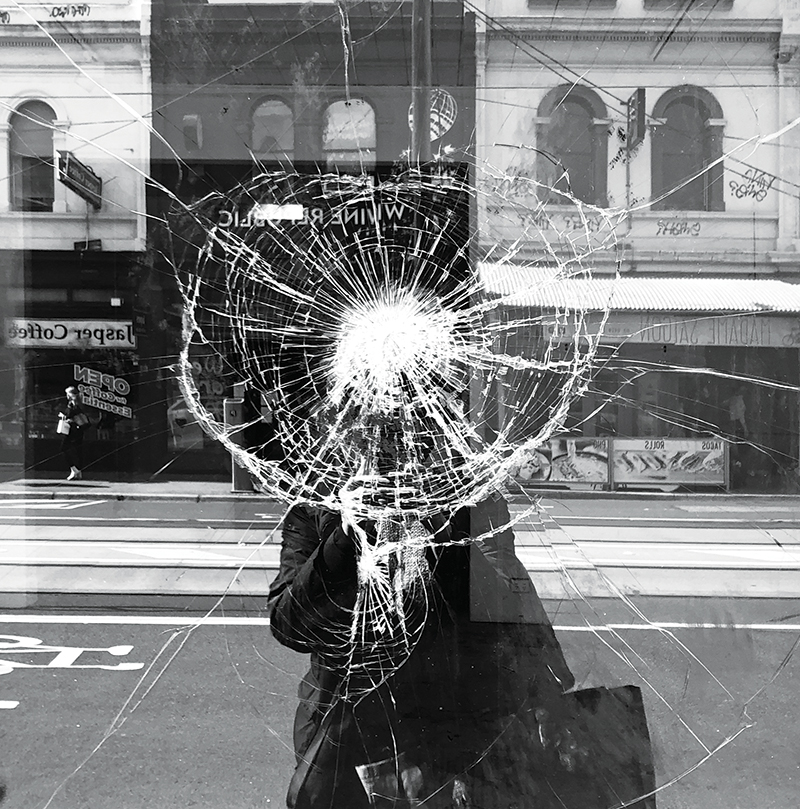 Viki Petherbridge’s Self Portrait with Vandalism During Lockdown.

In their different ways all three images reflect on the limitations of individuality and self-reliance, and work best not as isolated artefacts but in relation to one another. It is not surprising that more than one commentator has noted that a genuinely iconic image of the pandemic has yet to emerge, and may indeed never emerge, in contrast to the single, dominant images that have come to stand for the Spanish civil war or the Vietnam war, for example, or for a variety of other disasters and events of international significance. It is not simply a question of there now being too many photographs and too many photographers for one single image ever to stand out above all the others. This absence of the truly iconic photo lies in the nature of the subject itself.

The organisers of the Mass Isolation project acknowledge this reality when they effectively pass the whole question of iconic status down the line, inviting prospective contributors to “please share an iconic photo.” The word “iconic” here does not mean the singular image that will stand the test of time; it means good or striking or the best of the burst. It suggests the kind of image that will complement and interact with other images of similar intent, together creating a more complete picture.

This is another way of saying that no single photograph is likely to stand for the experience of the pandemic, even within a single country or community. A thoughtfully assembled exhibition like Mass Isolation Australia instead shows how images sourced from a variety of image-makers can together tell a coherent and evocative tale of what it was like to be there. •

In the footsteps of the garibaldini

Explaining Italy to the rest of us is Tim Parks’s specialty. Now he retraces a daring campaign conceived by the country’s best-known founder

“Wherever we will be, Rome will be”: a contemporary engraving of garibaldini before their retreat from Rome during the French siege of 1849. Alamy 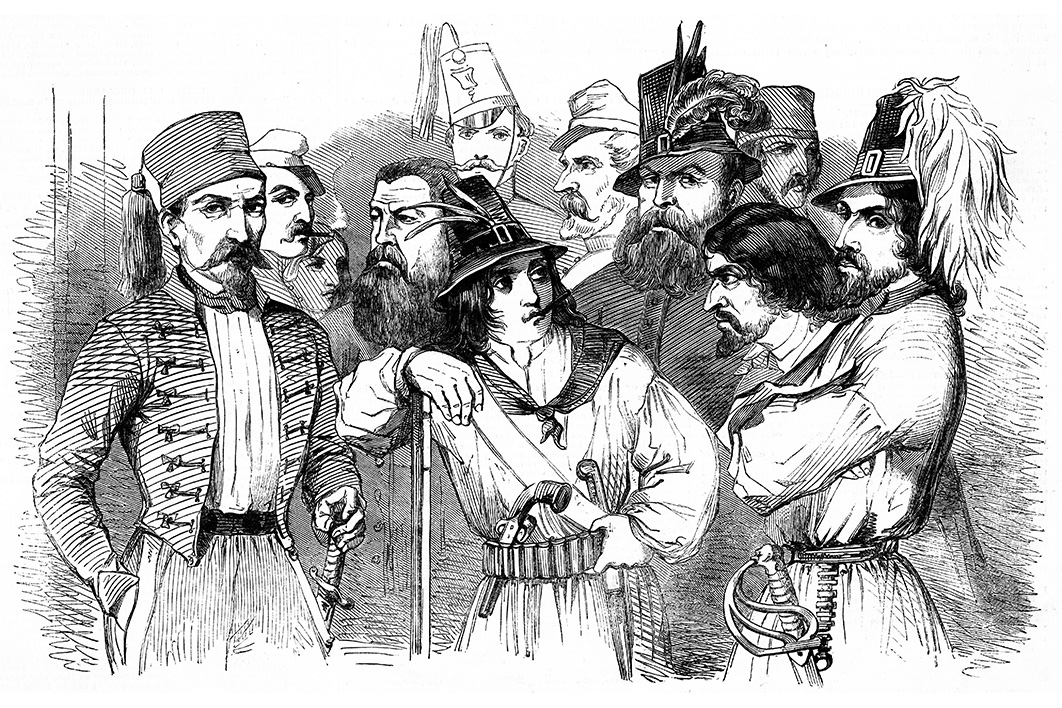 “Wherever we will be, Rome will be”: a contemporary engraving of garibaldini before their retreat from Rome during the French siege of 1849. Alamy