Monday’s runoff vote is another step in the reconfiguration of East Timorese politics, writes Michael Leach 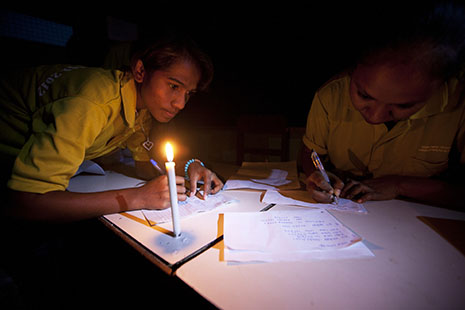 Polling staff prepare electoral materials before sunrise on the day of the first round of presidential elections in Timor-Leste in March. Martine Perret/UN Photo

TIMOR-LESTE returns to the ballot boxes votes on Monday in the runoff election for president. Two candidates now remain: the opposition party Fretilin’s Francisco “Lú Olo” Guterres, who received 28.7 per cent in the first round; and Taur Matan Ruak, an independent running with the backing of prime minister Xanana Gusmao’s CNRT – the National Congress for Timorese Reconstruction – who received 25.7 per cent.

In a notable achievement for Timor Leste’s two electoral bodies, conducting their first election without major assistance, the first round was declared free and fair first by all observer missions. But participation, at 78 per cent, was relatively low by East Timorese standards. Though officially down by just 4 per cent on the previous election, there were documented problems with deceased and double registrants artificially inflating the rolls in 2007. It seems likely that the actual participation rate was higher in 2007 and has now dropped more substantially, by 10 or even 12 per cent. This has been widely attributed to the new requirement that citizens return to their home districts to vote, necessitating lengthy and expensive journeys on poor roads. Although this controversial electoral provision remains in force for the runoff election, it will likely be changed for the parliamentary elections on 7 July.

Both remaining candidates are “twenty-four year” veterans of the Falintil’s military resistance to the Indonesian occupation from 1975–99. Lú Olo was president of parliament (a position equivalent to speaker) in the first post-independence government. Ruak was the final commander of Falintil in the late 1990s, and, until recently, the commander of Timor-Leste’s Defence Force.

The two key questions now are who will win the presidency on Monday, and how the result will affect the all-important parliamentary poll in July, when a new government will be formed.

In the presidential runoff, endorsements from eliminated first round candidates are critical. In 2007, such endorsements translated very accurately into support for the final two candidates. Back then, this led to Ramos-Horta’s first round vote increasing spectacularly from 22 per cent to 69 per cent in the runoff against Lú Olo.

This time there are two groups of eliminated candidates. Lú Olo has fared better in terms of endorsements from the group of lesser performing candidates, who collectively won some 10 per cent of the vote. These have broken roughly 8 per cent to 2 per cent in his favour, which means that he can conservatively be assumed to start the runoff ahead by some 36 per cent to 28 per cent.

The decisive question, however, will be how the larger votes of the third and fourth placed candidates, incumbent president José Ramos-Horta (17.5 per cent) and Democratic Party leader Fernando “Lasama” Araújo (17.3 per cent) will be distributed. To win on Monday, Lú Olo will need two-fifths of these Horta–Lasama votes to break his way.

To assess the likelihood of this, the logical starting point is to look back to 2007: and the indicators there are very strong for Taur Matan Ruak. Last time, nearly all these votes went against Lú Olo. It is easy to see why Ruak remains the favourite.

But several factors are different in 2012. First, both Horta and Lasama have declared neutrality in the runoff, leaving the imprimatur of the candidates an open question, and the outcome harder to predict. Horta’s position is that any such endorsement would be inappropriate while he remains the incumbent office holder.

Second, both Horta and Lasama are deeply disappointed that Gusmao’s CNRT backed Ruak – a figure outside the various political alliances they forged to dislodge Fretilin from power in 2007 – for president. It is also no secret that relations within the multi-party governing AMP alliance have soured considerably in recent years. None of the parties in Gusmao’s alliance have registered an explicit preference for the CNRT’s chosen candidate. It is worth examining each of these alliance parties in turn, as their supporters’ votes will be critical on Monday.

Lasama’s Democratic Party, or PD, is known to be split over its political alliances, and in a development that will surprise many, several of its branch executives have been actively campaigning for Lú Olo in the western districts. By contrast, PD branches in the east are strongly pro-Ruak, but this represents a mere 10 per cent of their overall vote base. Lasama’s neutrality, looked at in this light, is clearly in part an attempt to keep his divided party together.

Another important AMP alliance party is the ASDT – the Timorese Social Democratic Association – founded by the recently deceased first president of Timor-Leste (during its short-lived independence in 1975), Xavier do Amaral. Much of Amaral’s support went to Ramos-Horta last month, who performed strongly in traditional ASDT areas. This vote is now also divided, with do Amaral openly disaffected with the AMP government in his final years, but the ASDTs tourism minister, Gil Alves, strongly supporting Ruak. Even the Social Democratic Party, traditionally the most anti-Fretilin of the smaller alliance parties, has not registered a preference to its supporters.

This is, to say the least, hardly a vote of confidence from the AMP parties in their prime minister’s chosen candidate, though this may reflect more the troubles within the governing coalition than reservations about Ruak himself, who is widely respected by all parties.

One other factor is, however, associated with the candidate: Ruak was defence force commander during the 2006 crisis, triggered by the sacking of 600 “petitioners” soldiers who claimed discrimination against westerners in the force. Though he emerged relatively unscathed at the time, his own association with the crisis now reduces the negatives associated with his Fretilin opponent, particularly in the western districts which punished the former Fretilin government in 2007. It is also true that his strong military associations make some voters and party leaders uncomfortable, an issue not lessened by his campaign promise to introduce compulsory military service for eighteen year olds.

Bearing in mind the new divisions within the alliance parties, the neutrality of Horta and Lasama, and their known dissatisfaction with Ruak’s major sponsor Gusmao, the runoff election is far more interesting than many would have expected.

The result? Even bearing these new factors in mind, taking 40 per cent of the combined Horta–Lasama vote – so recently an “anti-Fretilin” vote – will be a difficult task for Lú Olo. While there is active campaign support from unexpected quarters, there remains a serious question mark over how effectively these elite manoeuvres will translate into actual votes on the ground. Clearly, however, the result will be closer than expected. There is no chance the winner will take 69 per cent as Ramos-Horta did in 2007, nor is 60 per cent especially likely. It is more likely the winner will achieve a vote in the low to mid-50s, making this the closest presidential race yet. Ruak remains the favourite on these numbers, but if Lú Olo secures a third of Lasama’s voters and half of Horta’s, he could claim a surprise victory. This remains the less likely scenario, but one far from inconceivable.

More importantly, there are clear implications for the parliamentary elections. A third force is emerging in the newly announced association between Ramos-Horta and Lasama’s PD, and one that is presently ill-disposed to CNRT continuing in government after July. While this recently announced electoral combination will prove appealing to many voters, it may not be quite as substantial as their combined presidential vote of 35 per cent. Lasama has a strong personal following among the youth of the 1990s, but a full third of these did not go on to vote PD in the 2007 parliamentary election, when the party received 11 per cent. For his part Ramos-Horta is strong on personal following, but light on organisational backing. Nonetheless, a 20 per cent vote between them will likely be enough to see them become the new kingmakers in July.

Xanana Gusmao’s CNRT will therefore have to do well in the parliamentary elections to improve their post-election bargaining position, which at present seems unpromising. Fretilin’s vote has held up in the 2012 presidential poll, and taking into account former Interior Minister Rogerio Lobato’s surprise fifth place finish with 3.5 per cent, will likely increase several points on their 2007 vote. Whatever the result next Monday, a major reconfiguration in East Timorese politics is in the making for July. •