The first round of Timor-Leste’s presidential poll signals not only a change in leader but also a vigorous parliamentary election in June, writes Michael Leach 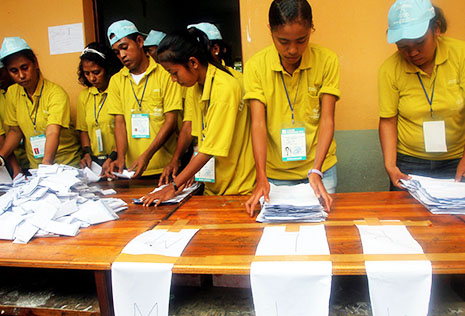 ELECTORAL registration requirements meant that many voters resident in Dili made long journeys to their home districts from the capital to cast their ballots in Saturday’s presidential poll. But although power outages in the districts delayed results, it was clear by Sunday that a new president will be leading the country after the run-off election next month.

With two-thirds of the national vote counted, the opposition Fretilin party’s candidate Francisco “Lú Olo” Guterres was leading with 28 per cent, followed by the recently retired defence force commander, Taur Matan Ruak, on 25 per cent. These two candidates will now face a run-off election in April to determine who will fill the largely ceremonial but influential role as head of state.

How next month’s election will play out is yet to be seen, but one outcome is already clear: after five years at the helm, the Nobel Peace prize–winning current incumbent, José Ramos-Horta, will end his tenure as president this year. He is currently trailing in third place in the count, with 18 per cent, followed by the president of parliament, Fernando “Lasama” de Araújo, on 17 per cent. Lacking major party backing in 2012, Ramos-Horta’s road to re-election was always going to be a more difficult one than in 2007, when he was supported by Prime Minister Gusmao’s party, the National Congress for Timorese Reconstruction. Their formerly close political alliance had broken down since, with the president an outspoken and often critical commentator on issues of government performance and transparency. Though Ramos-Horta believed he had an agreement that Gusmao’s party would not formally back any candidate, the party went on to endorse the popular former guerrilla leader Ruak shortly before the campaign.

As no candidate received 50 per cent, Lú Olo and Taur Matan Ruak will now to face a run-off election in April. Both are well-regarded “twenty-four year” veterans of the East Timorese guerrilla force Falintil, who fought in the mountains from the Indonesian invasion of late 1975 until the historic independence referendum in 1999. Whatever the final result, the new president will be less of an presence than the widely known Ramos-Horta, an outcome which may be emblematic of Timor-Leste’s readiness to move on from thirteen years of being an cause célèbre and a focus of successive peacekeeping missions. The outcome of the run-off election will be strongly influenced by whom Ramos-Horta and Lasama endorse in April and, to a lesser extent, by the endorsements of other eliminated candidates.

While the president has no direct power over policy issues, and government will be formed after the parliamentary elections in June, the national mandate gives the president considerable influence to comment on matters in the public realm. The president also retains the key executive power of appointing a prime minister after parliamentary elections, a veto over legislation, and the right to make appointments to key positions, such as the prosecutor-general.

With the all-important parliamentary elections to follow in June, perhaps the most significant comment of the election came from Ramos-Horta himself. Asked what he would do if unsuccessful, he pledged to fully support his successor in the president’s role, but added that he would also consider taking an “active part” in the parliamentary elections to follow in June. While this was not being read as a suggestion that he would necessarily be a candidate himself, he has publicly reserved the right to campaign for a particular outcome. Ramos-Horta’s considerable influence should not be underestimated. With the competition for a parliamentary majority expected to be tight in Timor-Leste’s proportional legislative elections, this could yet prove one of the more significant developments of the presidential poll. •