Too big to ignore

Monopolies and oligopolies have come to dominate Western economies, and the case for breaking them up is strong 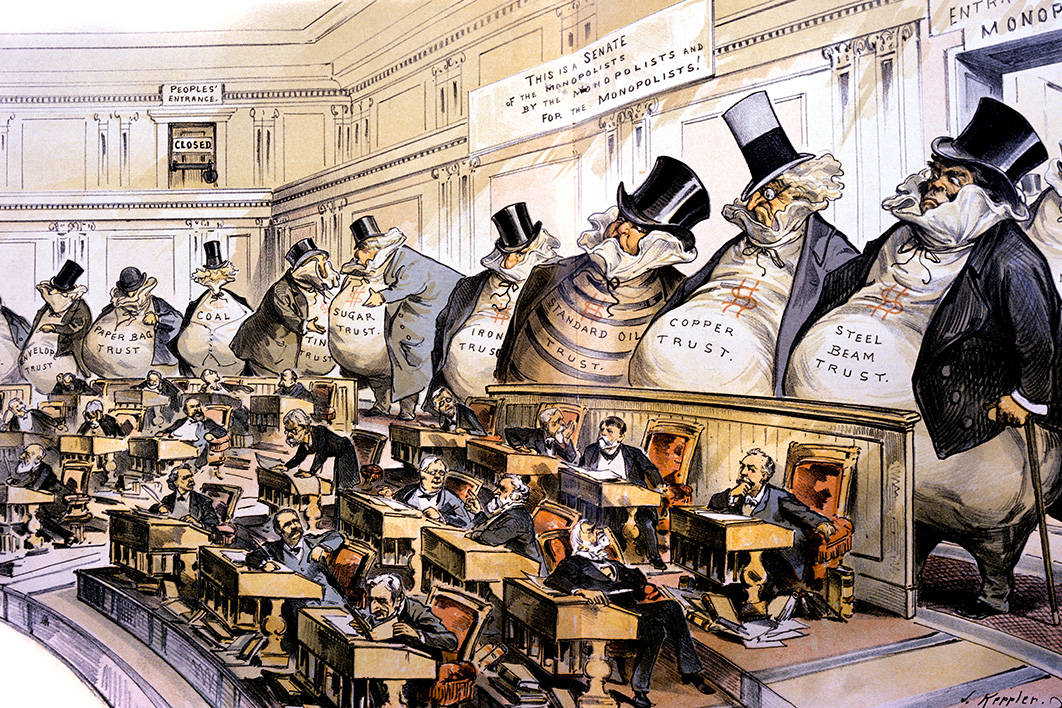 The last great age of monopoly: artist Joseph Keppler’s comment on the debate over the 1889 Sherman Antitrust Act in the American magazine Puck. ClassicStock/Alamy

Two hundred years after the birth of Karl Marx and fifty years after the last Western upsurge of revolutionary ferment in 1968, the term “monopoly capitalism” might seem like a relic of outmoded enthusiasms. But economists are increasingly coming to the view that monopolies, and associated market failures, have never been a bigger problem.

Monopolies are undoubtedly a primary cause of the alarming increase in inequality in most developed countries in recent decades. Gigantic monopolies, or near-monopolies, like Google and Facebook can use their market power to make super profits for a tiny group of senior managers and shareholders. But economists also worry about oligopoly markets, which are dominated by a small number of firms. In Australia, well-known examples include airlines, banks, insurance, energy, supermarkets, telecommunications and toll roads — in fact, the challenge is to find cases of the classical economic ideal: a market in which many small companies compete for customers, with no company large enough to unduly influence prices.

Economists have also returned to the problem of monopsonies and oligopsonies — those markets in which there are only one or a few buyers. In these cases, a business with monopoly or oligopoly power — a large supermarket chain, say — deals with a large number of suppliers that have few, if any, alternative customers. As a result, the sellers are forced to accept the terms they’re offered. Since the mid 1990s, this analysis has been extended to labour markets, where an imbalance of bargaining power exists between employers (as buyers of labour) and workers.

During the twentieth century, the market power of large firms was largely offset by what the economist John Kenneth Galbraith called the countervailing power of trade unions and governments. As unions declined and governments increasingly followed the dictates of financial markets, that power dissipated. Monopolies and monopsonies became ever more influential.

The key insight into what this means for employees was an analysis of minimum wages by David Card and Alan Krueger published in 1993. Card and Krueger examined changes in minimum wage rates in neighbouring American states and found — contrary to conventional wisdom — that a higher minimum wage had no discernible effect on employment in the fast food industry. Their estimates were subject to lots of reanalysis, the majority of which tended to confirm the original findings. More than twenty years later, Card and Krueger’s conclusions are broadly accepted, notably by Australia’s Reserve Bank.

Card and Krueger brought into the debate the imbalance of bargaining power between employers and potential workers, and the resulting importance of monopsony power. The central implication of their analysis is that higher minimum wages will shift the benefits of the wage bargain from employers to workers rather than raise the cost of new hirings to a level that cancels out any broader private and public benefit.

It might seem strange to impute monopsony to an industry like fast food, which is made up of a significant number of different chains. But individual workers can’t simply move from one fast food job to another — except in boom conditions — while employers can almost always replace them. Worse, many workers in the United States, even in low-level jobs like fast food, are subject to “non-compete clauses” that prevent them from going to work for another employer in the same line of business. And even in the absence of such agreements, many employers informally agree not to poach each other’s staff.

These constraints on employees represent a return to conditions that prevailed up to the late nineteenth century. Until then, employees were treated as servants, bound to the service of their masters for lesser or greater periods of time.

The final charge against monopolies is that they have contributed to the slower growth in productivity observed in most developed countries in recent decades. It is sometimes suggested that large firms are inherently less innovative than small ones, but there is little evidence for this claim. Rather, the problem is that most innovation is directed towards maximising monopoly profits rather than improving value for consumers, or for society as a whole.

The extent of the problem is unarguable. As of 2016, according to Business Insider magazine, the six most valuable companies in the world were Apple, Exxon, Alphabet (Google), Microsoft, Amazon and Facebook. All of them depended, to a greater or lesser extent, on monopoly power. The market value of these firms depends more on whether they can maintain that monopoly position than on whether the total return on their investments is greater than the social opportunity cost — the cost of their activities taking into account the other potential uses of their resources.

A central feature of this monopoly power is the idea of “intellectual property.” This is not a wholly new notion: inventors have long received patents that give them, for a limited period, monopoly rights to sell any product that uses their invention. Similarly, authors receive copyright over their work.

If the copyright is valuable, though, it usually ends up as the property of a corporation. Not coincidentally, the scope and duration of these rights was greatly expanded in recent decades. The term of copyright, for example, which was once just seven years, now extends seventy years past the author’s death. Patents have been extended using techniques such as “evergreening,” and now cover such dubious innovations as “business methods.” For several years in the 1990s, it was possible to patent just about anything by adding “on the internet” to the description of some perfectly standard activity.

Analyses of the upsurge in inequality since the 1970s have pointed to monopoly and monopsony power as a major factor. As Brett Christophers observed in his book of the same name, competition has ceased to be the “great leveller.” Or, to quote Nobel laureate Joseph Stiglitz, “as inequality has widened and concerns about it have grown, [the] competitive school, viewing individual returns in terms of marginal product, has become increasingly unable to explain how the economy works.”

The importance of monopoly and oligopoly in generating inequality has also been highlighted by bodies such as the Economic Policy Institute and the Open Markets Institute, as well as by David Autor and other leading economists.

As is usual in economics, most discussion focuses on the United States. What about Australia? Last December, the Grattan Institute released a report seeking to debunk the idea that monopoly power creates serious costs for Australian consumers. Understanding this counterintuitive finding takes some digging, but it turns out that the analysis rests on a simple, but dubious, choice of metric.

One useful measure of monopoly power is the proportion of household expenditure that goes to monopoly or oligopoly businesses. On the income side, economists worry about the extent to which large businesses can act as monopsonists (single buyers) using their market power over their suppliers, franchisees and workers. Taken together, the share of household expenditure and income that involves dealings with monopolists represents a reasonable measure of monopoly power.

Grattan’s analysts do something subtly, but crucially, different. They use the “gross value added,” or GVA, recorded in the national accounts to identify industries dominated by a few private firms. Their striking finding is that only about 20 per cent of the economy falls into this category. These firms account for a substantial share of the average household’s expenditure, but a much smaller share of GVA.

Why is this the case? Arriving at the GVA for any given firm involves subtracting from its sales revenue the inputs purchased from other firms. In Australia, those inputs are mostly services supplied by firms ranging from labour hire and cleaning services at the bottom end of the market to legal and accounting services at the top. In all but a handful of cases, these markets are highly competitive.

On any reasonable accounting, the fact that monopoly businesses deal mostly with competitive suppliers — suppliers that can be replaced if they don’t cooperate — makes the problem worse, not better. By using GVA as its measure, the Grattan analysis reaches the opposite conclusion.

The intertwined problems of monopoly and inequality are severe, and getting worse. So why has the economics profession’s renewed wariness of monopolies and oligopolies not been reflected in public policy?

As with most contemporary economic failures, it’s sensible to start by looking back to the period before the rise of market liberalism (or neoliberalism, or economic rationalism) in the 1970s. The problem of large-scale monopoly emerged in the late nineteenth century and was met with two kinds of responses. The United States undertook “trustbusting,” breaking monopolies like Standard Oil into separate competing companies. This was combined with close regulation of natural monopolies like infrastructure services.

Elsewhere in the developed world the main response was to take monopoly enterprises into public ownership, confronting oligopolists with publicly owned competitors. In Australia, for example, most infrastructure services were nationalised, while public enterprises played a major role in banking, insurance and airlines.

Milton Friedman and his colleagues in the Chicago School of economists sought to discredit both trustbusting and public ownership, claiming that any problems of monopoly could be overcome with light-touch regulation. In Australia, their success is reflected in the regulatory practices of the Australian Competition and Consumer Commission, the Australian Securities and Investments Commission and similar bodies. The failure of their approach, evident for some time, was hammered home by the Hayne royal commission.

A return to trustbusting and public ownership must form part of the solution to monopoly power. But the policies of the nineteenth and twentieth centuries are not going to be appropriate for monopolies built around intellectual property and the control of platforms like Facebook. Part of the remedy has to be strong privacy laws that render the exploitation of these platforms unprofitable.

But what is really needed is support for the non-commercial uses of the internet that have largely been displaced by commercial networks like Facebook and Twitter. These include blogs, wikis and websites oriented to information rather than sales pitches. Similarly, we need ad-free search engines of the kind Google promised to be in the long-lost days when its corporate watchword was “don’t be evil.”

Creating and maintaining such platforms is not a trivial task. The problems that have bedevilled the commercial networks would still arise: abuse and bullying, fake news and objectionable content. Any form of public support for internet media would need to strike a balance between the harm caused by open slather and the risks posed by censorship.

Public broadcasters exist to deal with earlier problems of this kind, and have generally done it successfully. (The howls of bias from the Murdoch press only go to validate this point.) New versions of these solutions will need to be found for the internet age.

The problems of monopoly and inequality may seem so large as to defy any response. But we faced similar problems when capitalism first emerged, and Western countries came up with the responses that created the broad-based prosperity of the mid twentieth century. The internet, in particular, has the potential to enhance freedom and equality rather than facilitate corporate exploitation. The missing ingredient, so far, has been the political will. •

John Quiggin is a Senior Fellow at the University of Queensland. His next book, Economics in Two Lessons: Why Markets Work, and Why They Can Fail So Badly, will be published by Princeton University Press in April 2019. 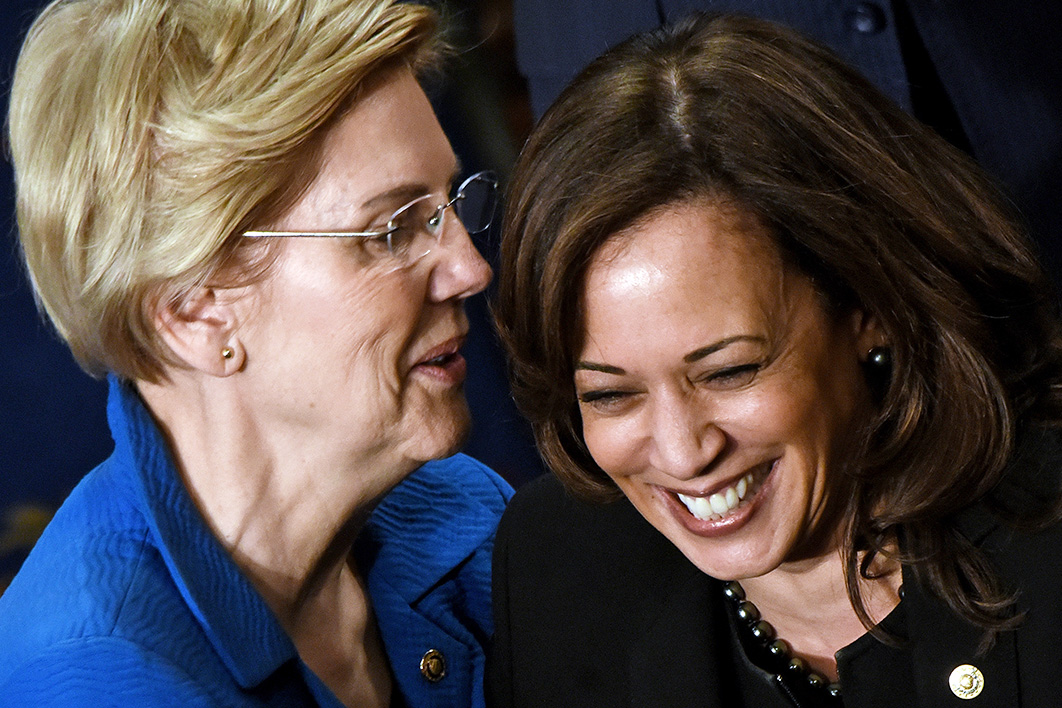