Too cheap to meter 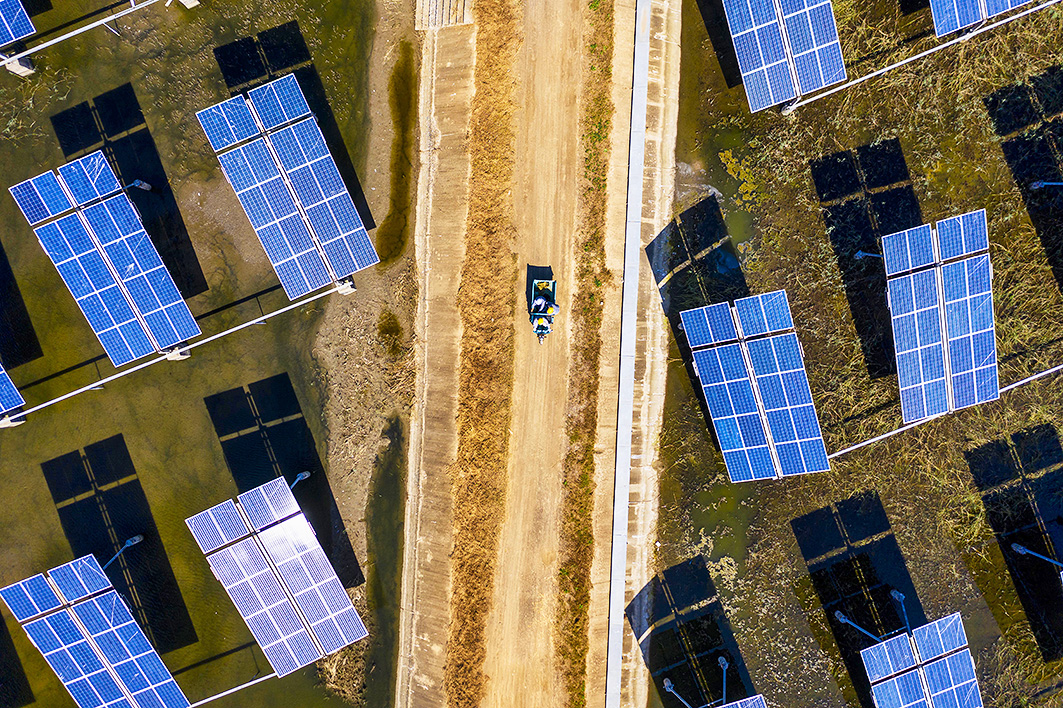 Time on their side: a maintenance crew driving through a solar panel and wind turbine base near Yancheng, in China’s Jiangsu province, which produces sufficient energy for 80,000 households. Alex Plavevski/EPA

The International Energy Agency attracted attention recently when executive director Fatih Birol declared that solar would be “the new king of electricity markets.” Long known for its conservative view of renewables, the IEA’s latest Global Energy Review marked a radical change. Instead of growing slowly over time, solar (along with wind and other renewables) is now seen as meeting all new electricity demand, with coal set for a sharp decline.

In some senses, this is not surprising. The cost of solar PV has been declining steadily for decades as a result of technological innovations. The cost of the silicon wafers on which solar cells are based has fallen dramatically, the efficiency with which they convert sunlight into electricity has increased, and all aspects of the manufacturing process have improved. Advances in wind power have been only slightly less dramatic.

At the same time, and despite laggards like Australia and the United States, governments around the world have committed to decarbonising the global energy system.

But the sharp change in the IEA’s analysis wasn’t primarily a reflection of technological progress or climate policy. Rather it was prompted by a decline in the interest rate used to calculate the cost of investments in energy.

Solar modules cost virtually nothing to operate, and last a long time. Manufacturers’ warranties typically run for twenty-five years, guaranteeing at least 80 per cent performance. Experience and experimental evidence suggest this is conservative: even after thirty years, modules installed today should still be working at around 85 per cent of their initial capacity. A working lifetime of twenty-five years is therefore conservative.

Solar PV is so cheap to operate that its cost arises almost entirely from the need for investors to earn a rate of return on the capital they put into constructing a solar project and connecting it to the grid. This is commonly expressed in terms of a “payback period,” the time in which a successful investment must return the capital invested. Until now, the IEA has used real rates of return ranging from 7 to 8 per cent, which implies payback periods of nine to ten years.

In its 2020 report, the IEA acknowledged how low interest rates have fallen by reducing the cost of capital to between 2.6 and 5 per cent for Europe and the United States, with somewhat higher rates for China and India. On average, the cost of capital has almost halved, implying a near doubling of the time a project needs to pay a full return to investors.

Now suppose, instead of private capital, solar projects were financed using thirty-year government bonds. Remarkably, the real rate of interest on these bonds has fallen to zero or below — and if the current judgements of investors are correct, rates will remain at or close to zero for decades to come.

Ultra-low interest rates have been obvious to anyone with a bank account or a variable rate mortgage. Until recently they have been seen as an anomaly, the result of emergency measures taken in response to the global financial crisis and then the Covid-19 pandemic. But twelve years after the GFC, and with years of low rates ahead of us, emergency conditions have become the norm.

The Australian government recently sold $15 billion in thirty-year bonds offering a yield of 1.7 per cent, less than the likely rate of inflation. European countries like France and Austria are selling bonds with maturities of fifty and even one hundred years. The US government is selling inflation-protected bonds of the same maturity for negative rates of interest. Some economists (including me) are now suggesting governments issue perpetual bonds, with a real return of zero (that is, an interest payment exactly sufficient to offset inflation).

What happens in the extreme case where interest rates fall to zero? In these circumstances, the notion of a payback period ceases to be relevant. All that is required for an investment to be justified is that its lifetime returns should exceed the cost of construction.

Once a solar module has been installed, a zero rate of interest means that the electricity it generates is virtually free. Spread over the lifetime of the module, the cost is around 2c/kWh (assuming $1/watt cost, 2000 operating hours per year and a twenty-five-year lifetime). That cost would be indexed to the rate of inflation, but would probably never exceed 3c/kWh.

There is, then, a real possibility that solar PV and other renewable technologies could fulfil the promise made decades ago by the promoters of nuclear power: that they will deliver electricity “too cheap to meter.” (Even with access to cheap capital, nuclear power never delivered on that promise.)

The prospect of electricity this cheap might seem counterintuitive to anyone whose model of investment analysis is based on concepts like “present value” and payback periods. But in the world of zero real interest rates that now appears to be upon us, such concepts are no longer relevant. Governments can, and should, invest in projects whenever the total benefits exceed the costs, regardless of how those benefits are spread over time. •

John Quiggin is a Professor of Economics at the University of Queensland. His latest book, Economics in Two Lessons: Why Markets Work So Well, and Why They Can Fail So Badly, was published by Princeton University Press.