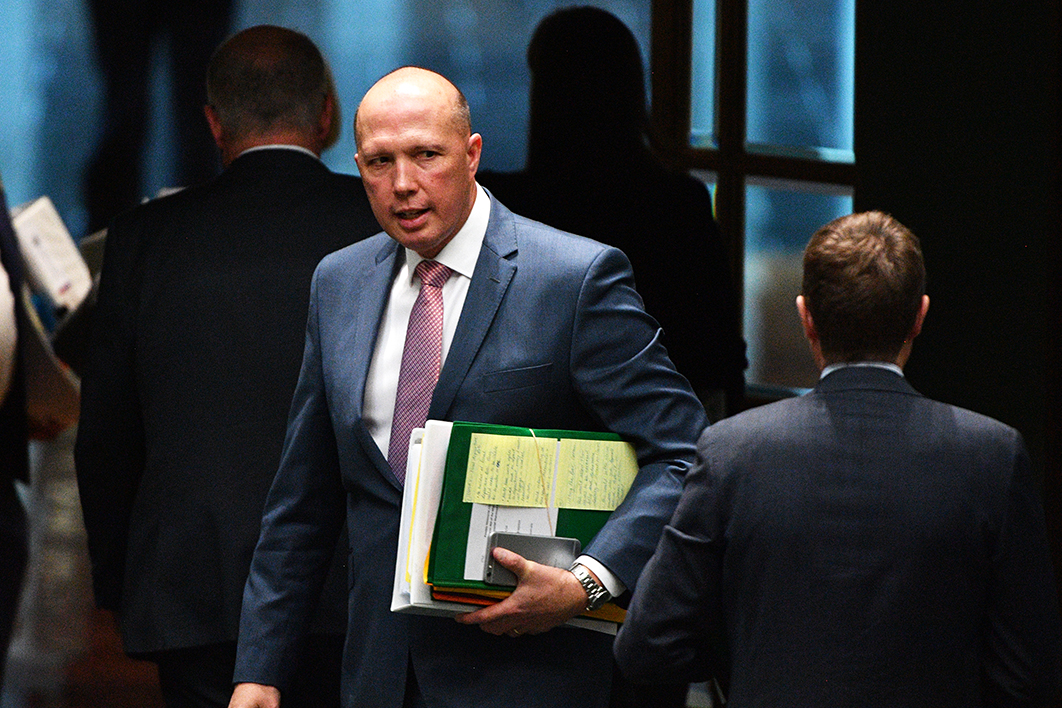 In an “exclusive” on the front page of Friday’s Australian, Simon Benson reports that migrant numbers for 2017–18 were 28,000 below the announced ceiling of 190,000. The reason: tougher vetting of visa applications. The fall “has been attributed to new integrity measures applied to the system following the discovery of a high number of fraudulent claims being made every year,” says Benson. The measures resulted in “a 46 per cent increase in visas being refused and a further 17 per cent rise in applications being withdrawn due to greater scrutiny.”

Home affairs minister Peter Dutton hasn’t released any explanation of the fall in numbers on his own or his department’s website, so we only have Benson’s figures to go by. Requests to the department and the minister’s office have so far elicited no response. But what we do know suggests that Benson has been taken for a ride, as have other journalists who picked up on his story.

The bigger of the two numbers — the 46 per cent increase in refusals — would make more sense if we knew which types of visas it applies to, how the figure was calculated and what the main reasons were. Refusal rates in the skill stream, for instance, are generally very low, so a small increase can seem very large in percentage terms. But even a 46 per cent increase in the refusal rate goes nowhere near explaining a 28,000 shortfall from the 190,000 ceiling.

It’s also important to understand that the administrative process of reducing migrant numbers can itself lift the refusal rate. Each of the department’s overseas posts and each regional office will have been allocated a reduced number of places in the program; once they run out, officials will focus on processing cases earmarked for refusal, letting the likely approvals bank up for the following year.

And the 17 per cent increase in applications being withdrawn? This figure is more than likely the result of changes in visa rules — an increase in the pass mark for the skilled independent category, for instance — than a product of “greater scrutiny.” Once again, without the details it’s impossible to know.

When Scott Morrison was immigration minister, and even in 2015–16, the first full year in which Dutton was minister, the department boasted of coming very close to hitting the annual 190,000 target for the migration program. It reported 189,770 visas issued in 2015–16; 189,097 in 2014–15; and 190,000 in 2013–14. If the Labor government’s approach in earlier years was “tick and flick,” as Dutton has described it, then how would he characterise Scott Morrison’s stewardship, and his own, during that time?

In fact, protecting “visa integrity” really doesn’t have anything to do with the fall in numbers. From the outset, Peter Dutton planned to reduce the 2017–18 program by whatever means necessary. As manager of the migration program for more than a decade between 1995 and 2007, I can attest that the immigration department was always very conscious of visa integrity issues. Dutton and his departmental head, Mike Pezzullo, needed a rationale for the cut — especially after Treasury and Home Affairs issued a joint report earlier this year extolling the economic and budgetary benefits of the migration program. “Increased scrutiny” was the best excuse they could come up with.

Dutton’s unilateral decision to cut the intake risks wrong-footing federal and state government agencies as well as businesses and individuals. In this year’s federal budget, for example, Treasury has assumed population growth at around 1.6 per cent. A recent speech by a senior official in the Reserve Bank assumes that this rate of growth will continue. Dutton’s measures, including his changes to temporary entry visa processing, will reduce this figure significantly, possibly reducing the expected population by between 200,000 and 400,000 by 2021.

There is nothing wrong with reducing the level of immigration as long as the intention to do this is clearly signalled and honestly explained. The home affairs minister refuses to do either. As a result, the figures underlying the 2018–19 budget have been put into serious doubt. State planning agencies are working to a population growth forecast that is too high, as are businesses reliant on the demand effects of a faster rate of population growth. Peter Dutton needs to start explaining what he is doing and stop keeping government agencies, businesses and the Australian public in the dark.

Simon Benson’s report raises one other issue. Why were these figures released exclusively and unusually quickly to the Australian, with no press release or any other details provided to other media? In previous years, Peter Dutton has sat on information about the program for months and then released it in a very low-key way. Could this month’s by-election in Longman — and the possibility of attracting votes from Pauline Hanson’s One Nation — be a factor? ●

Abul Rizvi was a senior official in the Department of Immigration from the early 1990s to 2007, when he left as Deputy Secretary.