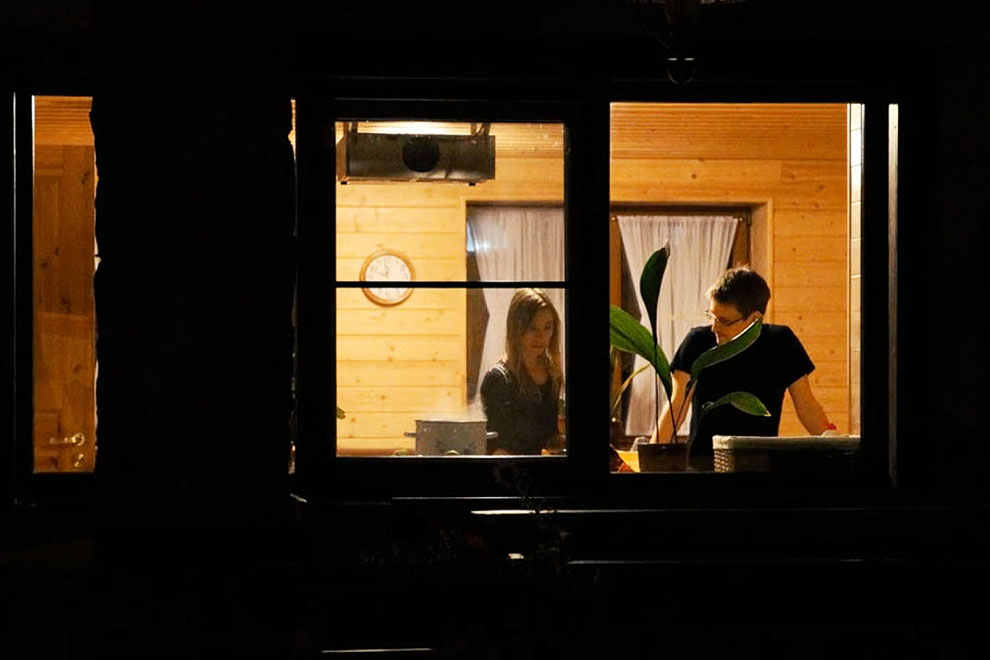 The central performing presence: Edward Snowden and his girlfriend, Lindsay Mills, in Russia, from Citizenfour.

Citizenfour, which has just won an Oscar as the best feature documentary of the year, is a film cut like a diamond: a precision-tool of an essay on the American government’s penetration of the private citizen’s affairs, both within and outside the United States itself, in the name of national security. Now, if only in the smaller cinemas, it’s packing them in. In the same moment, it becomes known that here, on the present attorney-general’s watch, our own security operatives will be gathering up the metadata on your, my and their comings and goings more assiduously than ever. Imitation, or our perennial obedience?

There’s a wide shot of an installation in the desert, with a group of radomes; but it’s not Pine Gap, it’s the National Security Agency’s storage site in Bluffdale, Utah. Pine Gap isn’t mentioned in the film, although it is a node in those global networks Edward Snowden is talking of, referring simply to “other national governments.” The point is that Snowden’s story is true; we here are part of the same story, and at least some local audiences know it. They bring their knowledge to the experience of this extraordinary film, and that intensifies its energy; Snowden’s exposure of the NSA’s activities also involves us, and the information systems in which, through the technological shifts and transformations of only three decades, we have become inextricably enmeshed.

At the same time, the film is a great defence of journalism, the force of determined professional enquiry. If it’s a portrait of Edward Snowden, it is equally one of Glenn Greenwald, a journalist of persistent independence in both life and work. He is seen in Rio de Janeiro, explaining the Snowden story in fluent Portuguese (it appears that he and his partner live there because same-sex marriage is not yet permitted in the United States). The director Laura Poitras has different reasons for living and working outside America. Following her earlier films, on the Iraq war (My Country, My Country, 2006) and on the intrepid whistleblower William Binney (The Program, 2012), she has been harassed and interrogated repeatedly on entry to the United States; her phone, computer and notes have been seized. She is now based in Berlin.

Snowden chose these two to film and report on his account of the NSA’s relentless tracking of the email and internet traffic in ordinary citizens’ lives. They meet him, swapping the agreed introductory phrases, in the Mira Hotel in Hong Kong, and over eight days record the crucial interview in his room. They were primed. Ahead of time, Snowden had sent them documents that gave details of NSA intercepts of email and mobile phone conversations – some of possible military value, others more doubtfully showing traces of the agency’s paths as “intelligence targets” were tracked, pursuing people “whose movements intersect,” movements of no interest to anyone but themselves. (Citizenfour doesn’t give that information, but Greenwald does, in his book No Place to Hide; so did Ryan Lizza in the New Yorker in December 2013, noting that “The NSA contends that it needs haystacks in order to find the terrorist needle.”)

Poitras is heard but unseen as she handles the camera; Greenwald’s questions, and those from his colleague Ewan MacAskill of the Guardian, are the triggers for Snowden to tell them and us why, with no care for his own future, he’s chosen to blow the whistle. He is very clear on this; he believes that the citizen should be enabled to deal with the state, and should not be overpowered by it. As he told a Reddit forum, “The idea here isn’t to fling ourselves into anarchy and do away with government, but to remind the government that there must always be a balance of power between the governing and the governed.” Privacy is linked to the liberty of the citizen, therefore also to her responsibility. In this country, it’s worth saying that that ethic is as much within American traditions as the NSA’s operative notion that government has a given right to know the citizen’s business.

Some critics, noting Poitras’s elisions and omissions, have had trouble with Citizenfour’s dazzling cinematic fluency; they try to separate the film’s aesthetics from its messages. This is the old struggle to analyse form/content relationships; they are separable but not separate. Poitras and her small camera crew keep agile pace with dialogue; Mathilde Bonnefoy’s editing is subtle and precise; music is present intermittently, as a kind of dark undertow – an electronic growl, not unlike a didgeridoo. We enter the story through a long, dark tunnel with strip lighting as Poitras drives into Hong Kong; white lettering against the black shows her initial email exchanges with Snowden, as he tells her that he didn’t really choose her – through her earlier films, she chose herself.

For all his expressed wish that he shouldn’t himself be the story, Snowden becomes the central performing presence; the black, white and neutral t-shirts could have been picked by a wardrobe department. He is disconcertingly young, clear-eyed, graceful and very much in charge of himself; the drive, the certainty, come out of long-built purpose, developed from his discovery of what, as an employed intelligence contractor, he found himself involved in: a system of god’s-eye surveillance seeking fully global reach.

At every point, the film presses against its own limits. The 9/11 attacks on the United States hang there in recent history as overwhelming imperatives; since those things occurred, every kind of surveillance is permitted; the NSA and its kindred organisations flourish, and Orwell’s visions look like coming true. In Snowden’s hotel room it is observed that they could be in a John le Carré novel; it could well be remembered that the spies and counter-spies of le Carré’s marvellous confections often find themselves on hidings to exactly nothing. Snowden is accused of serious crimes by the White House, but the president – caught, it seemed to me, like a rabbit in the headlights – tries to be somehow conciliatory: Snowden could, he believes, have proceeded lawfully, and we might have found ourselves “in a better place.” Not if you think about the FBI charging in on the wheelchair-bound William Binney, and not if you consider the way the chiefs of the NSA and their confrères were prepared to lie, under oath, to a Senate enquiry on national intelligence activities. That occurred, as the film shows, some months before Snowden began leaking classified NSA documents, pages and pages of them, in June 2013, and before he chose to go into tactical exile.

Snowden’s findings are possible because he’s a young man of the twenty-first century, highly adept in computer processes; the knowledge he shares has been made possible by his own years of employment within government, within the CIA itself and with computer firms that enabled the programs of that agency and of the NSA. The knowledge he shares in Citizenfour has not been casually gained, but built up over years; what’s admirable is his determination to share it, and to take responsibility for the consequences. The United States has revoked his passport; he is held to be guilty of stealing government property, unauthorised communication of national defence information, and communicating classified intelligence to unauthorised persons – film-makers and journalists, that is. The irony now is that he has asylum in Russia, where in quite recent years journalists intent on telling the truth have been murdered. He believes, however, that his form of opposition is Hydra-headed; if he is silenced, others will take his place, and the film’s ample, wide-open ending suggests that it’s happening already. The next whistleblower emerges, from an unexpected direction; Greenwald and Snowden are regaled. The audience, watching them as they survey a great mess of shredded evidence, is invited towards both laughter and relief: look at this – for all their surveillance, that endless expense on data and metadata, all that ambition for overruling knowledge, look: it collapses into chaos, it’s totally out of control.

Calm and undramatic for much of its length, visually sparse, driven by the certainty of its pursuit, Citizenfour is a smashing piece of cinema. Some reviewers ritually gibe at the Oscars, but those can be cheap shots. Even the Academy of Motion Picture Arts and Sciences can get it surprisingly right; as they did last year, for example, with the foreign-language lists, in recognising Rithy Panh’s The Missing Picture, this year with Pawel Pawlikowski’s Ida. With the nomination for Abderrahmane Sissako’s marvellous Timbuktu, seen at last year’s film festivals, a superb work of African cinema is there on the map. So they find places on the major list. For these works to be better known in Australia, we need a much wider non-commercial exhibition network than we have.

As it is, quality cinema has been on hand, in more comfortable offerings. Timothy Spall’s performance made Mr Turner a very superior costume drama. In this version of his story, the artist is gruff and crass; his treatment of women is appalling; he is absolutely committed to his work, and there is appreciable comedy in his relations with the Royal Academy. The image we will remember is not of sunsets nor of ships, but of the man being lashed to a mast in the storm, the better to form his great images of the ocean in tumult.

Though its period is recent, The Theory of Everything is also costume drama, set in the 1960s and 70s, very finely performed by the prizewinning Eddie Redmayne and Felicity Jones. From numerous TV versions of the Stephen Hawking story, we are familiar with the sight, and the synthetic voice, of the heroic genius; now we have also the devotion of his wives. There is nothing, however, to show us what is really at stake in the changing cosmologies, in that “space-time singularity,” which he can prove, then adroitly disprove at will. Somewhere inside this circumspect version there’s a story about a woman, her life with music, literature and religious faith; about what it might mean to turn away from a highly approved kind of devotion to the crippled superior being – where were the blood and tears? The film offers pictures from a well-known history. All quite harmless; the story is tidied up, and therefore lost. • 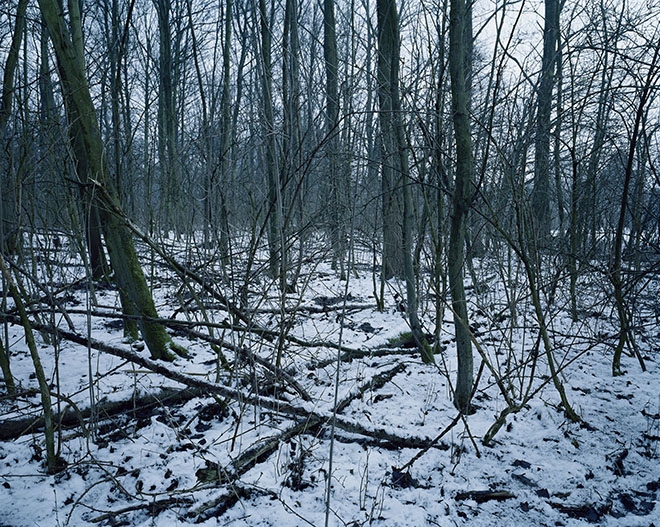