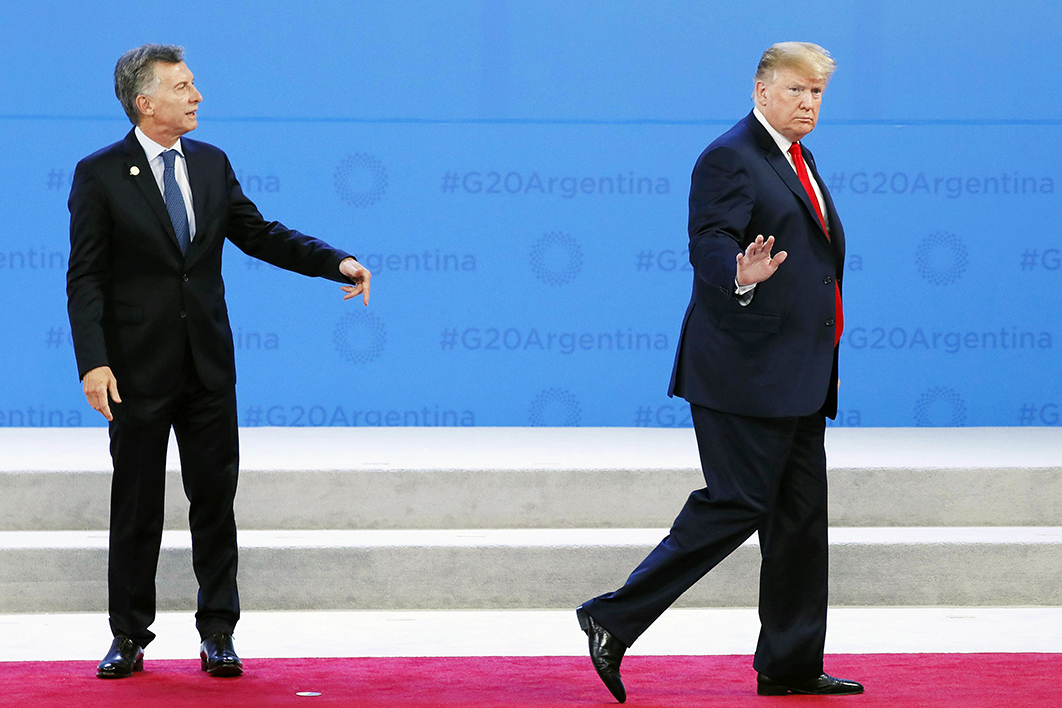 My way or the highway: US president Donald Trump walks away after being greeted by Argentine president Mauricio Macri during the opening day of the G20 summit in Buenos Aires. Kyodo via AP

This weekend saw two trade deals. One was a deal under which China agreed to buy a “substantial” amount of exports from the United States to lower the US trade deficit so that, in return, the United States will not increase tariffs from 10 to 25 per cent. The other trade deal was at the G20 summit, where leaders agreed to reform the World Trade Organization.

Only one of these trade deals will work.

The reason is simple: America’s trade deficit cannot be “solved” bilaterally with China, or with any other G20 country. A country that invests more than it saves (as the United States does) must import foreign capital from other countries (such as China) to finance investment. This inflow of capital appreciates the US dollar, which reduces exports and increases imports, resulting in a trade deficit.

The US trade deficit simply reflects its capital inflows from countries such as China. It reflects the fact that US consumers, firms and the government borrow to finance investment and consumption. Trade deals with China will not change this underlying saving-and-investment behaviour and will not, therefore, alter the overall trade balance.

The G20’s trade deal, on the other hand, is a vital step in the right direction. The World Trade Organization is out of date. The institution needs to be modernised to reflect a changing global trading system. It must reflect the growth of the emerging markets, the evolution of cross-border production networks and the growing importance of digital trade, global data-flows and trade in services. It must deal with both traditional barriers to trade, like tariffs, and behind-the-border barriers that prevent foreign firms from competing with local firms. It must open the trading system to small and medium enterprises to better spread the benefits of globalisation throughout communities.

The agreement to reform the World Trade Organization is a significant opportunity to unleash a more inclusive wave of trade liberalisation. It also reminds us of the critical value of the G20 and the importance of defending multilateralism against Trump’s preference for doing deals bilaterally.

This weekend’s summit was the tenth anniversary of the G20. When leaders met a decade ago, they faced a global financial system on the brink of collapse. Credit markets were freezing. Stock markets were collapsing. Rolling failures across financial institutions were shattering economic confidence.

The cooperation displayed by G20 leaders in the years that followed was unprecedented. They resisted protectionism. They injected US$1.1 trillion into the world’s crisis-fighting institutions. They launched US$6.4 trillion of fiscal stimulus. They coordinated cuts to interest rates and created a network of currency swap lines between central banks. They created the Financial Stability Board. They laid the groundwork for sweeping new financial regulations and reforms to address multinational tax avoidance.

How quickly times have changed.

For many, the G20 we saw on the weekend was a shadow of its former self. Conflict over climate change. Separate paragraphs in the communiqué for the United States. Bowing to Trump on trade, with no reference to protectionism or even the trade war (simply “trade issues”). Saudi Arabia’s crown prince high-fived by Vladimir Putin after being called out by Emmanuel Macron about the assassination of journalist Jamal Khashoggi. A communiqué that lacks practical commitments. A G20 coasting on legacy commitments from years past.

But is this a fair comparison? Is it correct to conclude that the G20 is no longer useful?

We know what Winston Churchill was getting at when he said, “Never let a good crisis go to waste.” He meant that it is politically and economically easier to take big, bold actions during a crisis than in peacetime. He was right. The G20 can’t save the world all the time.

The G20 was born out of a global crisis. This allowed it to have an immediate win by confronting a problem, reaching a consensus on action and moving forward. That’s a tough act to follow.

Comparing the G20 today with the G20 during the global financial crisis, as is often done by the media, is misleading. It ignores the fact that the G20’s objectives have changed. Its focus has shifted from crisis response to dealing with deeper, more difficult structural issues.

Harder problems take longer to fix. The issues the G20 was dealing with on the weekend were as complex as they are important: following through on a commitment to reform the World Trade Organization to stop a trade war; developing a road map for long-term infrastructure investment; discussing automation and the future of work; promoting gender equality; reforming the structures of our economies.

Some might argue this lets the G20 off the hook too easily. After all, this weekend’s summit had plenty of shortfalls.

The G20 remains deeply divided on climate change. The “G19” reaffirmed their commitment to the Paris Climate Accord while the United States reaffirmed “its strong commitment to economic growth.” This is a tired debate that should have been settled years ago.

The silence of the leaders’ communiqué on the global trade war reflects just how divisive an issue this has become. The G20’s longstanding anti-protectionism pledge is nowhere to be seen; the communiqué makes no mention of the trade war or protectionism. Prime minister Scott Morrison awkwardly refused to acknowledge that US tariffs were a form of protectionism, despite the US fighting to have the word “protectionism” removed from the communiqué.

Argentina promised a strong focus on the future of work, infrastructure, gender equality and food security. But practical actions are hard to find. Leaders offered nothing more than general statements and endorsements of reports from international organisations, or merely relied on past-year commitments.

But while progress has been slower than many might hope, this weekend’s summit shows the G20 is doing its job. For one thing, the G20 has been effective at managing Trump. Trump came into office wanting to streamroll the rest of world. He wanted to shut down action on climate change, scrap the rules-based trading system, abolish key global institutions. He has certainly tried. But, thus far, he has failed.

This has been a key achievement of the G20. The grouping — characterised in recent years as being the “G19 versus 1” — has provided a framework for sensible countries to unite and minimise the damage Trump is inflicting as he attacks the rules-based global order.

Relatively small countries like Australia ordinarily stand little chance in bilateral negotiations with the United States or China. As the African proverb goes, when the elephants fight, it is the grass that suffers. The G20 allows the small and medium economies of the world to band together and have a say in global governance.

The biggest risk to these countries, particularly Australia, is an abandonment of this multilateralism. Trump’s preference for bilateral deals means this poses several serious threats.

Second, multilateralism is a useful way of taking the heat out of international negotiations. Bilateral negotiations have a nasty habit of collapsing into us-versus-them affairs. Having more countries at the table allows a broader range of voices to be heard. It allows for a broader menu of policy solutions and allows like-minded countries to build strategic coalitions.

When it comes to this weekend’s G20 summit, scepticism is easy. Solving the world’s problems is not. Those who seek instant gratification from global forums like the G20 will always be disappointed. But the weekend showed that the G20 is doing its job. It is advancing practical solutions on trade and is holding the line against Trump’s attacks on the rules-based global order. It now falls to Japan, the G20 host country in 2019, to turn promises into action. •

Adam Triggs is the Director of Research at the Asian Bureau of Economic Research, Australian National University. He was an adviser on the G20 in the Prime Minister’s Department during Australia’s G20 host year.

If this isn’t the latest in a series of false alarms, then Labor might finally be forced to disown the project 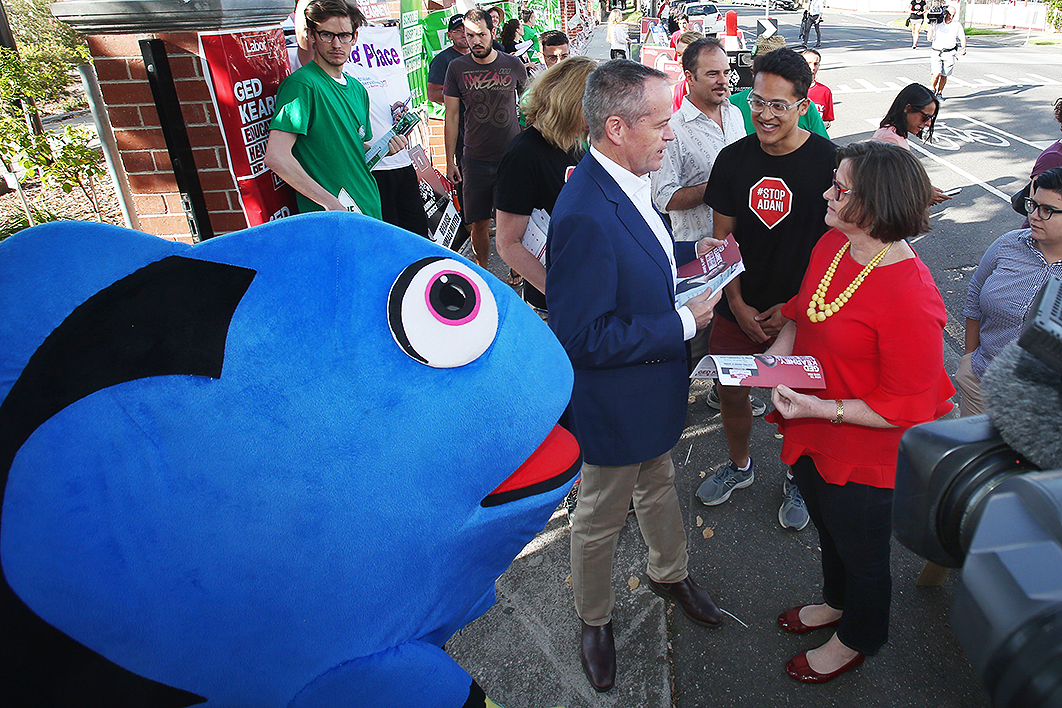