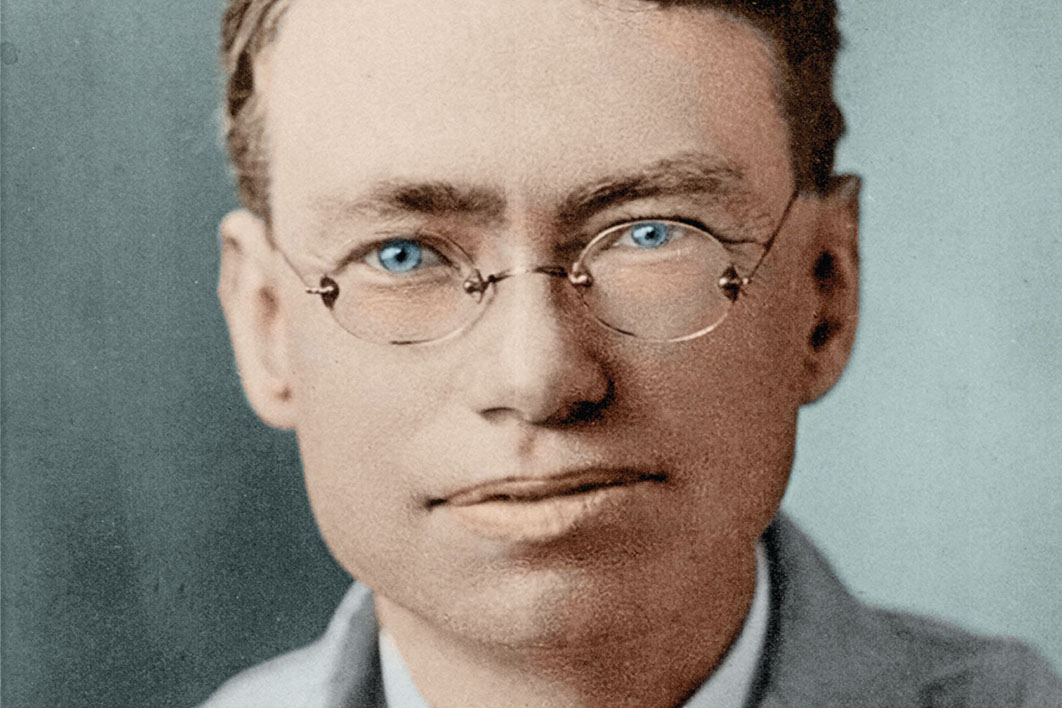 “Happy and strong”: a colourised version of a portrait of V. Gordon Childe in the 1920s.

The Fatal Lure of Politics: The Life and Thought of Vere Gordon Childe
By Terry Irving | Monash University Publishing | $39.95 | 442 pages

Vere Gordon Childe was a giant of European archaeology and perhaps the best-known Australian-born intellectual of the first half of the twentieth century. He was also the author of How Labour Governs (1923), the first detailed study of the Australian labour movement’s successful pursuit of power in a parliamentary system. Melbourne University Press republished that book in 1964 when Australian labour history was taking off and young Marxist historians were criticising the Labor Pary’s cautious parliamentarianism. Terry Irving was one of these, and he has now published a biography of Childe.

Childe was born in 1892, at a time when dreams that Australia would be a workers’ paradise, free of the poverty and invidious class distinctions of the Old World, were shattering in Australia’s first great depression. Strikes by maritime workers, shearers and miners were all defeated, and from these reversals came labour-based parties resolved to marry industrial action and parliamentary representation.

By the time Childe came of political age at the University of Sydney in the years before the first world war, Australia’s labour parties were well established in all the states and the new Commonwealth had a Labor government, led by the Scottish miner Andrew Fisher. Also well established was Labor’s distinctive mode of organisational discipline, developed to ensure that Labor’s parliamentarians remained true to the workers’ interests when they acquired a middle-class role and salary. The Labor MP represented the Labor movement, and should he forget this and choose to follow conscience or individual conviction rather than the will of caucus, he would be expelled.

During Childe’s time as a student, NSW Labor premier Jim McGowan, himself a good unionist, used the power of the state to break a strike of militant gas workers. Childe’s sympathies were with the strikers rather than the Labor leaders. At Oxford during the first world war his radical convictions strengthened; he was opposed to the war and to conscription. As a visitor to Britain he was exempt from military service, but many of his friends were jailed for their conscientious objections. He joined the Oxford University Fabian Society, where he mixed with other idealistic young radicals, including Douglas and Margaret Cole and a budding communist, Rajani Palme Dutt, with whom he set up a Socialist Society.

Despite his outstanding results at Oxford, and despite having published a scholarly article on Minyan ware in the Journal of Hellenic Studies, Childe’s radical reputation prevented him from getting continuing academic employment when he returned to Australia in 1917. He was placed under surveillance by Australia’s military intelligence agency, on advice from MI5, and lost a position as a university college tutor because of his anti-war sympathies. Eventually he found employment as private secretary to John Storey, the Labor opposition leader in New South Wales.

It was a difficult time for the Australian labour movement. The party had split over conscription during the war, and Labor prime minister Billy Hughes had taken his supporters into a new Nationalist government. This not only exposed different views about state power and personal liberty; it also reflected Labor’s difficulties in holding its parliamentarians to party policies, the inevitability of “rats” like Hughes, and the inherent limitations of the parliamentary road to socialism. With the opportunity to study these dilemmas from the inside, Childe increasingly doubted that a Labor government would ever introduce bold legislation to achieve social equality.

He returned to Britain in October 1921 to take up a research position in the office of the NSW agent-general, but when the Labor government fell six months later he lost his job. In Australia, he had established himself as a labour intellectual — lecturing, writing, advising, debating. With time on his hands in London he completed the manuscript of How Labour Governs, picked up part-time political work and rekindled his interest in archaeology, where he eventually found secure employment.

Childe published the first of his books on European prehistory, The Dawn of European Civilisation, in 1925. Countering the view that there was no civilisation in Europe before the Bronze Age, he argued that the material remains of these earlier societies showed practical humans making their worlds with labour and enterprise. Following Marx, his was a materialist concept of society and of progress, focusing on the means of production and the movement of practical innovations with migrations of craftspeople.

In fact, Childe was the first scholar to conceptualise the shift of humans from hunters and gathers into settled agriculturists. This Neolithic revolution supported larger settlements of people with more complex socials structures. He went on to write twenty-five more books, the most popular of them, What Happened in History, selling 300,000 copies in fifteen years.

Terry Irving gives us a good sense of Childe the person, a hardworking, driven, rational man who had friends but no intimate personal relations, dressed eccentrically and was sometimes mocked for his plain looks. His friend Jack Lindsay believed he wore a sardonic mask because of his inability to reveal what he really felt. Today we would probably say he was “on the spectrum.” He didn’t return to Australia until his retirement. Then, after receiving honours and visiting old friends, he jumped to his death at Govetts Leap in the Blue Mountains in 1957.

Irving takes the mystery surrounding Childe’s death as his starting point. With no suicide note, and at the height of the cold war, friends like Bert and Mary Evatt wondered if he’d been pushed by people who thought he was a spy. Only years later was the mystery solved. Just before Childe took a taxi from the Carrington in Katoomba to the fatal cliff, he had sent a friend in England what was effectively a suicide note, to be opened ten years after his death.

The note was not a conventional account of a personal existential crisis so much as an argument for voluntary euthanasia. “The progress of medical science,” it began, “has burdened society with a horde of parasites — rentiers, pensioners, and other retired persons whom society has to support and even to nurse.” Venerable counsellors “hanging round the fringe of learned societies or university institutions can slow down progress and blast the careers of younger, innovative thinkers.” A sane society, he said, would offer euthanasia as a crowning honour.

In his own case, Childe wrote, his memory was starting to fail and he saw no prospect of settling the problems that interested him most on the available data. When his pension ran out, he would become a burden on society. “I have always intended to cease living before that happens… Life ends best when one is happy and strong.” As Irving writes, Childe wanted his friends to know “that in his chosen way of dying he was defiantly continuing his commitment to progressive and humanist values.”

Irving’s discussion of Childe’s experience of labour politics is densely researched and immensely detailed. It is a reminder of the intensity of the investment radicals once made in working-class politics, both in Childe’s time and again in the 1960s and 1970s when many of those studying labour history were also activists, using the mistakes and achievements of the past to inform present political action.

I wanted more in this book, though, about Childe’s archaeology — his methods and the sites he dug — and why he was so passionate about it. And I also wanted more straightforward accounts of his contribution to the discipline, not just the deep structures of his thinking but what he actually argued. When I finished the book I was still somewhat unsure why Childe was so important to archaeology.

As a labour historian, of course, Irving is more interested in Childe as a labour intellectual. He would likely say that Sally Green has already written the detailed story of Childe as a prehistorian, but The Fatal Lure of Politics is the only biography of Childe I am likely to read, and its subtitle meant that I was hoping to encounter that part of his life as well. •

Judith Brett is an Emeritus Professor of Politics at La Trobe University. Her latest Quarterly Essay, The Coal Curse, was published last month by Black Inc.