On the one-hundredth anniversary of its publication, Glenn Nicholls looks at why Thomas Mann’s 1912 novel has stood the test of time 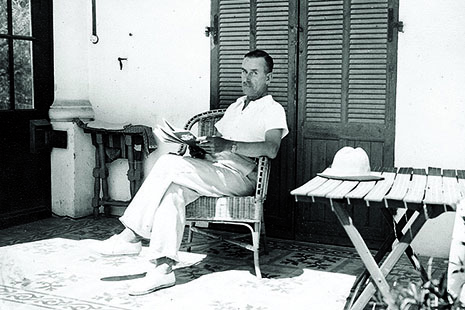 IN 1911, suffering writer’s block, Thomas Mann took a trip to Venice with his wife, Katia. There he was entranced by a lovely-looking boy, nicknamed Władzio or Adzio, who was staying at their hotel. Abandoning his unfinished work, Mann began a story about a middle-aged writer who is inspired to a final burst of creativity by the beauty of a youth called Tadzio and who consequently stays on in Venice despite a cholera outbreak in the city. Within a year Mann had finished Death in Venice. He published the novella in the avant-garde literary periodical Die Neue Rundschau in October–November 1912.

In the English-speaking world Mann is often seen as a staid writer, an image that reflects his stiff public persona and some equally stiff translations of his work. But Death in Venice is bold and inventive, engaging the reader to great effect.

Mann turned his own writing crisis into a story about art and culture in the twentieth century through the figure of middle-aged writer Gustav von Aschenbach. He did this while managing to tell a dramatic story about the relationship between Aschenbach and Tadzio; in fact, the cultural references and allusions heighten the drama of the relationship. Steeped in culture, Aschenbach imagines Tadzio in scenes from classical Greece, where beauty in boys was celebrated. Increasingly immersed in that world, his rapture culminates on an evening when Tadzio smiles at him for the first time.

Aschenbach recalls the smile of the mythological Narcissus at the moment when he saw his own reflection and lost himself to intense yearning. For a moment Aschenbach chastises Tadzio for daring to bring forth the smile that belongs on no one’s face but that of Narcissus, the “incomparable boy” of myth. But then he is overcome.

“He who received this smile hurried away as if with a fateful gift,” writes Mann. “He was so shaken that he was forced to flee from the lighted terrace and front gardens into the dark recesses of the park. Peculiar, tender reproaches sprang from him. ‘You dare not smile like that! Listen, no one may be smiled at like that!’ He threw himself onto a bench, he was beside himself, and he breathed the nocturnal fragrance of the plants. And slumped back with limp arms, overcome and shuddering, he whispered the stock phrase of yearning – impossible here, absurd, ridiculous and yet sacred and reverent: ‘I love you!’”

This scene comes at us with great force. It is we, the readers, who hear the declaration of love – no one else is present. We hear it emanate from classical mythology and echo down the ages, a stock phrase by the time Aschenbach utters it but one that is heavy with meaning. We see that the declaration is true – Aschenbach’s fervour confirms it – yet “impossible here, absurd.” By the end of the scene we have been taken into the heart of Aschenbach’s passion and witnessed literature’s capacity to evoke reality convincingly while simultaneously casting it in a critical light.

We also find ourselves at a crucial point in modern writing. The modernist movement was built on critical self-reflection and a scepticism about traditional art forms, especially a rejection of the harmony and balance of classical art. Aschenbach’s immersion in Tadzio’s classical beauty is un-modern and consequently impossible and absurd in the here and now. He has lost his grip on the present and, as Mann writes, is “waylaid in Elysium, on the edge of the earth.” Aschenbach’s final burst of creativity is short-lived because his loss of critical self-reflection means his death as a modern artist. That death captures the rupture between modernity and all that went before.

Aschenbach is blissfully unaware of his own decline but we can see it clearly. A fearful dream, which comes over him as powerfully as Tadzio’s smile, dramatises the destruction of the cultural fabric of his life. Again this comes directly at us as readers. Aschenbach is in deep sleep and cannot react; it is we who apprehend his dream as it bombards him: “his soul itself was the stage and events burst on it from without, violently overthrowing his resistance, passing through and leaving his existence, the culture of his life, behind, devastated and destroyed.”

The final part of the novel plays out Aschenbach’s end. Although he learns the truth about the cholera outbreak, he fails to warn Tadzio’s family. Instead, seeing other tourists leaving, he harbours the bizarre fantasy that he will be left alone with the youth in the empty city. One afternoon, following Tadzio and his sisters on a walk, he finds himself deep in the infected city. Consumed with thirst, he eats overripe strawberries, though he is aware that fruit is contaminated.

Despite the inevitability of Aschenbach’s death, Mann’s compelling scenes sustain our interest to the end. Venice is a monument to the past, and time “disintegrates” around Aschenbach as he loses touch with modernity. In the background, the city’s seascapes melt into the sky and all is hazy and indistinct in the heat. The scenery tells us that oblivion is encroaching.

Aschenbach’s death comes when Tadzio smiles at him a second time. The writer watches as the youth, who has waded out to sea, turns back and seems to beckon him. Aschenbach imagines that a classical statue has come to life to spirit him away: “It seemed to him as if the faint and lovely psychagogue had smiled at him, waved to him; as if, way out there, he had released his hand from where it had been joined at his hip and now was showing the way into the enticing, engulfing immensity. And he who was watching prepared, as so often before, to follow.”

A century after its publication Death in Venice remains a fascinating portrait of a writer left behind by modernity. While giving expression to his own writing crisis, Mann shows how the old-fashioned Aschenbach, unable to extricate himself from his crisis, is consigned to oblivion. A year after the publication of the novella, the outbreak of the first world war completely destroyed the world of Wilhelminian Germany that Aschenbach had belonged to. Mann himself turned away from the brooding tone of Death in Venice to write what he called a “humoristic counter piece.” This became a massive ten-year task, the monumental Magic Mountain. •

Glenn Nicholls is an adjunct researcher with the Swinburne Institute for Social Research.