The education revolution failed — and so did its way of thinking 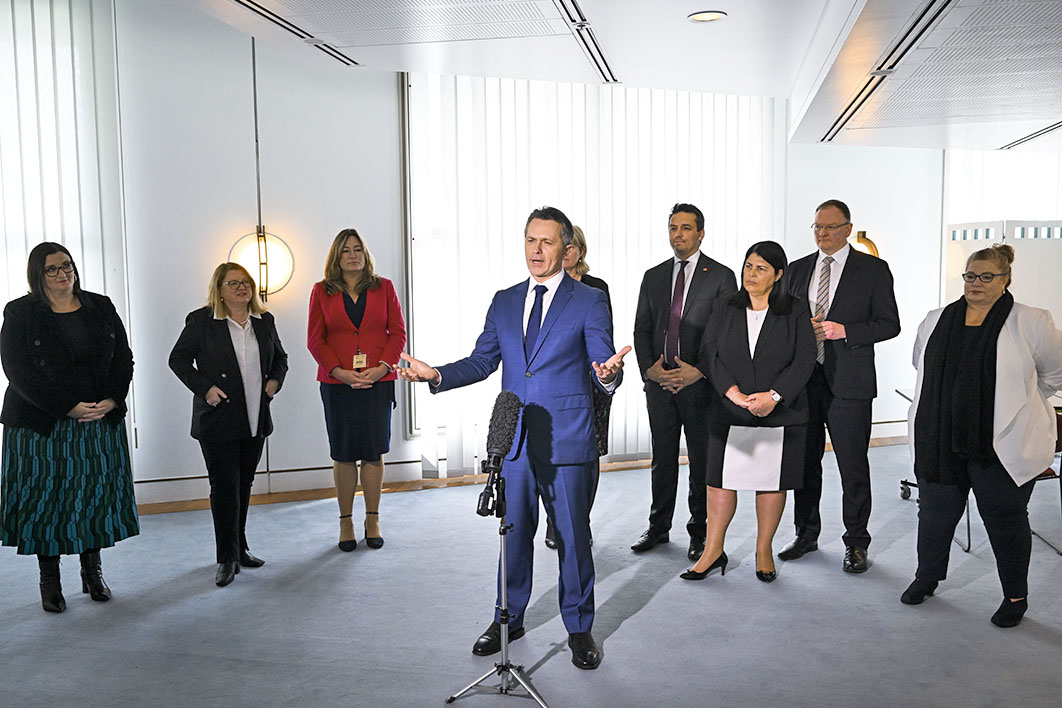 Australian schooling lives within the comprehensive failure of Kevin Rudd and Julia Gillard’s “education revolution.” David Gonski’s proposals, by some margin the best of a bad lot, had only limited purchase on the many-sided problem they tackled, and didn’t get up anyway. The “teacher quality” agenda (or a little less aggressively, “teaching quality”) wanted to create a more respected and capable profession via better pay, higher entry scores and training in “effectiveness,” but delivered only low morale and a flight from teaching. The “outcomes” push, a stick with no carrot, collapsed schooling’s complicated work into a single narrow measure, systematised a draconian regime of domestic and international testing, and compounded the blunder by constructing a new national website that told teachers and parents which schools to avoid.

All this was supposed to be driven by an expanded “national” machinery of agreements, meetings and institutions centred on Canberra — the only administration not stuck with the tricky business of actually running schools — in which state/territory and federal governments of all persuasions were enlisted. Those responsible for making this Heath Robinson contraption work were left confused about “who is steering the ship” and exposed to incessant micromanagement by state/territory ministers who carry the can for troubled systems. And the system as a whole — already hamstrung by the proliferation of agencies, institutions and authorities — was left with no entity (state, federal or national) with a span of authority and responsibility sufficient to drive improvement.

The “revolution” and its various components were no sooner in place than a leading international authority on systemic change predicted in unambiguous terms that it wouldn’t work. Six years on, the head of Australia’s leading education research agency asked how well we’re doing in meeting a series of “challenges,” ranging from lifting the teaching profession to reducing the long tail of student underachievement. He found that things were going nowhere or backwards in all of them. Six years later he looked again: much the same story. The revolution’s own miserable measure of “outcomes” in the “fundamentals,” the PISA test, has recorded a slow but steady decline in Australia. The rallying cry of “top 5 by ’25,” embedded in the Australian Education Act of 2013, now looks risible.

This comprehensive failure has left an elephant-sized question in the room: now what? The revolution’s one real success was in directing the attention and shaping the language of “policymakers” and “thought leaders.” They now have no other way of thinking and talking about schooling. Hence ministers declaring that yet another bad PISA result to be yet another “wake-up call,” hence more announcements about lifting teachers’ pay or entry scores, hence new tests to make sure that teachers can spell, and hence more looking at other countries to see what they are doing right that might work here — all less from conviction than from not knowing what else to do. Seen from the outside it comes close to a famous definition of insanity.

But what is the alternative? Revive and reconfigure Gonski, the revolution’s one attempt at structural reform designed to “level the playing field,” as proposed in Waiting for Gonski by Tom Greenwell and Chris Bonnor? Put all schools, government and non-government alike, on a common basis of funding and regulation to stem the “residualisation” of the government sector and the damage being done to the learning and life chances of the most disadvantaged students?

Greenwell and Bonnor’s proposal, and the analysis underlying it have a lot going for them, on which more in a moment. But first the “but.” Could Gonski rise again? It enjoyed massive popular and professional support and still didn’t get up last time. What chance a revamped (but not necessarily less threatening) version promoted in the midst of the long post-Gonski hangover? When the non-government schools are already on such a good wicket?

And let’s imagine a school system on the other side of a substantial upheaval. We’d still have much or all of that counterproductive national machinery. We’d still have Canberra finding yet more ways to interfere in everything and federal education ministers wanting to be national education ministers. We’d still have an obsolete “grammar” of schooling centred on ranking rather than success for all. And we’d still have heads full of trivialising ideas about “outcomes,” “effectiveness,” “teacher quality” and “performance,” as well as the belief that salvation will be found in “practice” when the problems are essentially structural. If it is possible to say that the Greenwell and Bonnor proposal is too much, it is also possible to say that it is not enough.

Are we in a catch-22, where what needs doing can’t be done? Not quite. The one thing that can be done is the thinking that the revolution couldn’t do.

• Stop obsessing about a narrow range of “outcomes” and start thinking about all the things that schools do, are and should be. Schools are meant to — and often claim to — “develop the whole person” and not just the cerebral cortex. Very well: how do we know if they are? Getting a broader sense of cognitive “outcomes,” often urged, is just the start. Schooling is an experience as well as a producer of outcomes: around a fifth of most working lives is spent at school. Is it a safe, happy, rewarding experience? For whom? Schooling has outcomes for the social order as well as for individuals. Are they of the kind that a pluralist, democratic society needs?

The case has to be made for indicators that measure the quality of the experience, the diversity within each school rather than between schools, and the development (or otherwise) of “general competencies.”

• Stop devising bite-sized improvements and start trying to understand why incremental reform has such a disappointing record. Consider, for example, the current crop of solutions to teacher shortages, low morale and poor retention in the light of “reforms” stretching back to the 1960s. One by one, apparently sensible proposals led to new agencies and institutions for teacher training, registration, standards and discipline, and the setting of terms and conditions of employment — most within each of the eight states and territories and/or at the national level.

That tangle meant failure for the Rudd/Gillard proposals, and it means that the current crop will fail too. In much the same way, bite-sized improvements in teacher workload have driven one reduction after another in class sizes and one increase after another in numbers and categories of “support” staff. The result has been chronic cost escalation, an extended life for a fundamentally obsolete way of organising student and teacher work, and no improvement in teacher morale and workloads.

• Stop talking about the quality of teaching (or teachers) and start talking about the quality of work in schools. In fact, go a step further: stop focusing on teachers and teaching and begin at the beginning, with learning. For its fixation on teaching, the revolution can thank a vast body of research into “teacher effectiveness” premised on the assumption that it could replicate the success of the medical sciences by doing the same kind of science. The most fundamental mistake lies in imagining that schools are essentially deliverers of the service of teaching in much the same way that hospitals and clinics deliver health services. In reality, schools aren’t like that at all.

Schools are sites of the production of learning, not by teachers but by a four million–strong workforce otherwise known as students. The big determinant of their productivity is not the quality of supervision but the organisation of their work. An inherited “grammar” of schooling is organised around increasingly intense competition, from Year 1 all the way up to Year 12, for position in a ranked order. It guarantees failure for many. A more productive grammar would shift assessment from ranking to the growth and progress of each student and, around that, change the organisation of work and workplaces.

The implications stretch from infrastructure (dominated by the classroom) to industrial awards and teacher unionism to popular assumptions about what schooling looks like. That’s what needs thinking and talking about. It is terra incognita to effectiveness research, and to the revolution.

• As the grammar of schooling is to work and workplaces, so are the “sectors” to the industry as a whole. Don’t take them as a given for policy; do make them its objects. They are not, as is so often claimed, a means by which families can choose an “appropriate” or a “faith-based” schooling, or a way for governments to cut costs by permitting fees to be charged. They are the means by which some schools have sucked the most sought-after students and families out of other schools.

Social segregation in Australian schooling is now more pronounced than in any comparable OECD country. To social segregation is added religious division — government schools are secular, but almost all non-government schools are attached to one or other of around twenty religions and denominations. With that and other sorting devices comes the separation of language and cultural groups too. In this matter, we have a very good starting point for thinking and talking in Greenwell and Bonnor’s book. (And, we should add, a case of “outcomes” being given too much weight and social, religious and cultural division getting not nearly enough.)

• Don’t dwell on “transparency” (a Gillard favourite), or reporting and accountability (state ministers’ contribution to teacher workloads), or “school performance” (intimidatory ranking for schools as well as kids). Start talking about the structure of the system and its governance — the fragmentation of authority and responsibility within state and territories, between the sectors, and between these and Canberra and its purportedly “national” machinery.

How can these bizarre arrangements be reconstructed? Should we go back to the future? Return responsibility for schooling whence it came (and as the Constitution requires), to the states/territories? Install in each a cross-sectoral statutory authority with a remit to drive a long-term restructuring of the industry and its work and workplaces? If not that, then what?

There is no shortage of things that could be added to this list. The revolution’s questionable taken-for-granteds (“equality of opportunity,” “choice,” schooling’s economic contribution) badly need re-examining. So does the habit of looking for silver bullets in other countries rather than trying to understand how Australia’s system has developed and what it can and can’t become. So also the endless talk about what makes a good teacher or a good school to the exclusion of what makes a good system.

But the point is not in a to-do list. The point is that the revolution has failed and so has its way of thinking. The first step towards unbeaching the whale is to start thinking outside that suffocating box. •

Dean Ashenden is an Honorary Senior Fellow at the Melbourne Graduate School of Education.