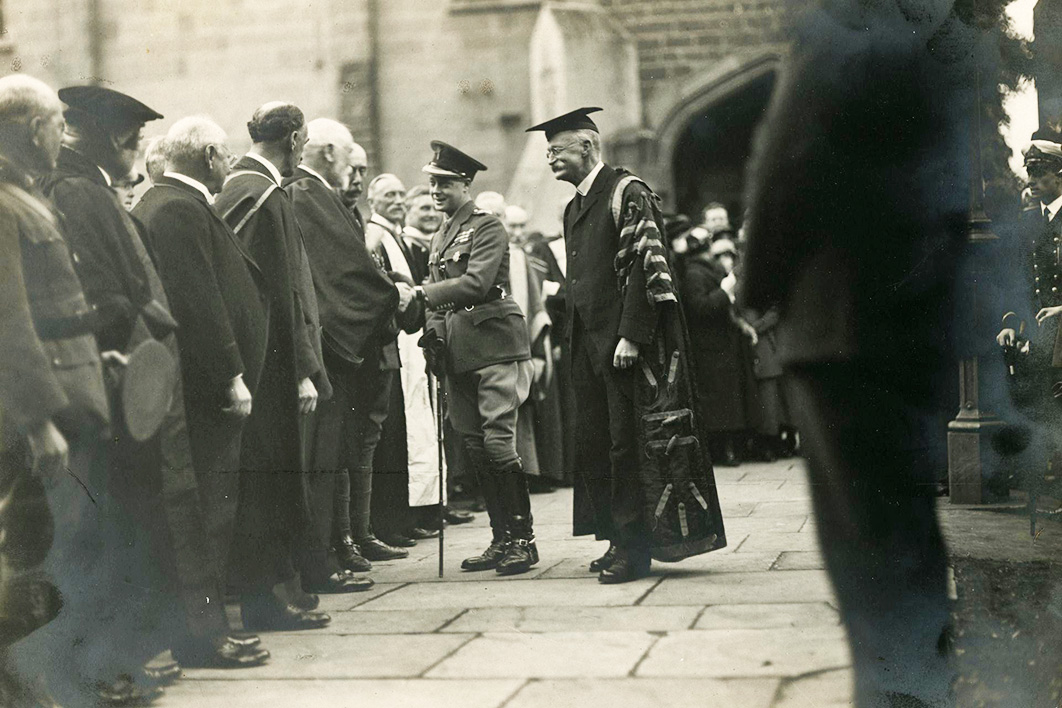 Australian Universities: A History of Common Cause
By Gwilym Croucher and James Waghorne | UNSW Press | $39.99 | 288 pages

Vice-chancellors of Australian universities may be surprised to learn that while their universities were once “fiercely independent” they are now harmoniously united in the pursuit of a “common cause.” The claim, on the first page of this new history of higher education by University of Melbourne scholars Gwilym Croucher and James Waghorne, is not about all of us working in universities; it is specifically about the vice-chancellors. Commissioned to celebrate the centenary of the Australian Vice-Chancellors’ Committee (the AVCC, now Universities Australia) Australian Universities recounts the past century of university administration.

Commemorative volumes rarely seek to tackle thorny problems like those presently confronting Australian university management. In 2020 alone, university administrators have imposed brutal staff cuts, got busted on wage theft charges, and responded too meekly when the federal government introduced a fee regime that discriminates against the very students who most need to be brought into the system. From this perspective, a sympathetic history of university leadership is interestingly timed.

Nevertheless, as a history of universities seen from the top, Australian Universities is useful and important. The book as a whole offers much-needed insights into how the priorities and struggles of university leaders changed as the sector expanded from fewer than 8000 students, when the vice-chancellors first met in 1920, to around 1.4 million at the book’s conclusion. Among the institutions that constitute higher education in Australia, the AVCC’s story has been missing from our historiography and it is a very welcome addition.

Possibly concluding, with some justification, that a history of the AVCC would be interesting only to a handful of readers, Croucher and Waghorne offer something more: a broad account (though not a “comprehensive” one, as the cover blurb misleadingly suggests) of higher education in the twentieth century seen through the lens of the AVCC archives. Beginning with the federation of university leaders in the 1920s, Australian Universities aggregates material, particularly about funding sources and amounts and the negotiations that led to them, that has often been difficult to locate.

Before the second world war, university funding depended almost wholly on state government support and student fees, though Sydney, Melbourne and Adelaide were also blessed with significant endowments. The risk of lower standards in institutions so far from the metropole was a preoccupation of university leaders in the early twentieth century, and academic staff — just over 400 of them, nationwide — were encouraged to gain experience in British universities that would help maintain standards back here.

Initially, vice-chancellors were preoccupied with their own universities’ curriculum and degree offerings. Only slowly did they begin to coordinate these with one another rather than considering themselves extensions of their state schooling systems, as they had tended to do throughout their early history.

In their recounting of the growth of Commonwealth influence in higher education during and after the second world war, Croucher and Waghorne show how the growing value of research to the nation and to universities was surprisingly controversial. Their description of how vice-chancellors were compelled to navigate this fresh ground might be familiar stuff to historians of universities, but they provide wonderful new detail. We knew that vice-chancellors were “concerned about the conditions that might be applied to Commonwealth funding,” for example, but we now also know that this was why vice-chancellors asked for so little. The £100,000 they sought for research across the whole sector in 1944 is the equivalent of just over $7 million in today’s money — very little indeed, even given the sector’s size in the 1940s, and particularly with university research so crucial to the war effort.

Vice-chancellors also managed significant change during the cold war, and that opened up new forms of conflict between university administrators and their staff. A federal staff association acted to protect academic freedom from vice-chancellor interference, though Croucher and Waghorne stay oddly neutral in recounting the controversies over the behaviour of University of Tasmania philosopher Sydney Sparkes Orr and the exclusion from UNSW on political grounds of historian Russel Ward. Perhaps as a gesture to the present, they offer a beautiful quote from economic historian Max Hartwell, who resigned over the Ward case. It was, he argued, an “unpleasant example of what can happen in a university where power is concentrated, where policies are bad, and where professors are timid.”

The authors recount the key reviews that shaped the modern university system in Australia, led by Keith Murray in 1957 and Leslie Martin in 1961, though their really new material relates to the relationship between the AVCC and the emerging tertiary union. Together, management and union urged the federal government to systematise many aspects of higher education, including salaries; in return, the federal government worked with them to develop a cohesive tertiary system, smooth administrative procedures, and funding systems that helped vice-chancellors pursue their priority of ensuring the very best teaching across all universities.

These warming accounts of relations between universities and government seem foreign today. Friendly dealings continued into the 1970s, when Gough Whitlam made education free for students, though fans of Whitlam will likely be disappointed by the light treatment given to this phase. But Croucher and Waghorne are probably justified in spending more time on the less well-researched Williams report of 1979, which came at a time of rapid transformation. University administrators at the time paradoxically referred to this as a “steady state,” but income was indeed steady rather than growing as spectacularly as it had been for the previous twenty years.

Croucher and Waghorne’s interpretations of university policy and administration into the 1980s and beyond in their final chapters are rather more controversial. A fascinating account of the AVCC’s sponsorship of an early version of the internet in Australia is sandwiched between well-known government policy initiatives, including the end of the “binary” system that counterpoised universities and colleges of advanced education. As policy transformations unfolded, tensions emerged between the AVCC and the colleges’ Australian Committee of Directors and Principals, though Australian Universities has not taken the opportunity their archive presented to explore them.

Instead, the chapters restate the exaggerated claim that the Dawkins reforms went beyond simply unifying the sector and made it too uniform. In arguing this, the authors cite former Melbourne University vice-chancellor Glyn Davis’s The Australian Idea of a University, an account focused on a particular lobbying agenda. For Davis, the problem presented by the “unified national system” would be resolved by more “prudent” diversity. Such prudence would be achieved, he reckoned, by making some institutions cost less than they currently do — though presumably not the one he then led. Some believe that this would ideally be achieved by stripping some of us of our research mandate, though Davis admitted this would be “politically impossible.” As new universities are established in the future, Davis argued that these should not pursue research from their inception; instead, this “fifth wave” of institutions might offer the diversity prudence requires.

A British reader of Davis’s argument — one who teaches a single student at a time in the Oxbridge fashion — suggested to me that English universities have become too uniform for similar reasons. I took this to mean that he believed a less even distribution of resources would be beneficial. The conversation took place at a specialised seminar in a college founded in fourteenth-century Cambridge, surrounded by crystal chandeliers and oil paintings of university luminaries. Melbourne University’s research environment may not be quite so salubriously cloistered as that, but academic teachers in smaller Australian universities, fronting classes of hundreds while battling to secure research workload (of which many have none), would surely dispute, on empirical grounds, such claims to uniformity.

Growth since Dawkins has meant more women go to university than ever before. Moreover, as a scholarly endeavour, the history of education has been heavily influenced by feminist thought. In this context, Australian Universities is surprisingly blokey. Male scientists and politicians dominate, while few women are offered as exemplars, and Hawke government education minister Susan Ryan misses out altogether. A brief discussion of gender equity among university leaders doesn’t cite work on women’s leadership in higher education by Tanya Fitzgerald, Jill Blackmore, Alison Mackinnon and other female scholars. That literature would also have usefully filtered Universities Australia’s achievements through a more critical lens.

A chapter celebrating Australia’s success in attracting and supporting students from abroad seems somewhat jarring in 2020, when one-third of our international students cannot afford to buy food and one in seven have been made homeless. Admirably, Croucher and Waghorne re-evaluate international students by a measure other than their fee income, pairing the recruitment of international students with equity efforts since the Bradley report of 2008 — both being initiatives that have helped diversify the student population. But it’s important to remember that the diverse members of Australia’s student body aren’t spread evenly through the system: one group of universities recruited most of the international students; the other did much of the heavy lifting in terms of equity. Considering them as a totality misrepresents their presence as uniform, and the pattern of their participation has implications for long-term inequality in Australia.

These reservations notwithstanding, the final chapter of Australian Universities offers what is certainly our best account of the federal government’s higher education policies over the period since John Howard’s election in 1996, a period that has arguably shaped our contemporary universities much more than the entirety of the earlier period. This recent past, moreover, has been sadly neglected by historians of higher education. The new archive that Croucher and Waghorne have contributed to the history of higher education in Australia enriches our field. •

Revised: With apologies from the author, this review has been amended to remove the suggestion that Glyn Davis had advocated removing research from some existing universities.