Could there be a less sinister reason why the Russian president wants the way open for a longer tenure? 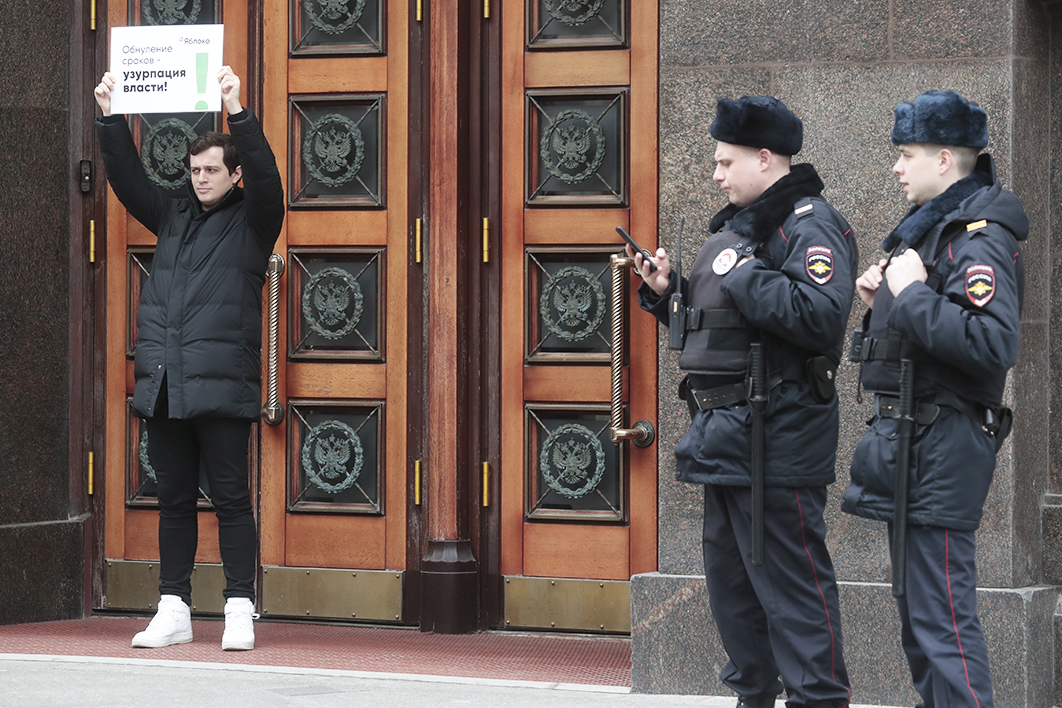 A protester from Russia’s Yabloko party with a placard reading “Zeroing presidential terms is usurpation of power” in front of the State Duma in Moscow last Wednesday. Sergei Chirikov/EPA

Recent reports from Russia have encouraged a belief that Vladimir Putin might be setting himself up to rule the country for another twelve years after his current presidential term ends in 2024. Exhibit one in this argument is Putin’s support for a manoeuvre that would allow him to circumvent the current limit of two consecutive presidential terms.

The first sign of change came out of the blue, in January, when Putin released a series of draft constitutional amendments. Some were symbolic (a new mention of God in the constitution, for instance) and some concerned questions of social policy, but a series of proposals were designed to change Russia’s political structure. Among the most important were plans for the leading figures in the government to be appointed (rather than simply approved) by the State Duma, the lower house of the legislature; for the president to be limited to a total of two terms in office (rather than the current limit of two consecutive terms); and for the role of the advisory State Council to be enhanced.

Putin proposed that these amendments, once worked up into a satisfactory form, should be put to the people in a popular vote, though this is not formally necessary for constitutional change.

The ensuing debate in Western countries focused on how Putin could use the new rules to prolong his tenure at the top of Russian politics. They seemed to prevent his standing for another term as president, but it was widely conjectured that he could take up a position in the enhanced State Council and continue to exercise power from there. Putin publicly rejected the latter possibility, however.

The proposals were immediately sent to a specially formed commission, which was charged with preparing them for presentation to the Duma for formal approval. The commission appears to have received thousands of further suggestions for constitutional change, but in the end it recommended Putin’s proposals. They then proceeded smoothly through their first reading in the lower house.

Things got more interesting during their second reading, last Tuesday. Duma deputy Valentina Tereshkova, best known as the first woman in space, called for the president to be eligible for election an unlimited number of times. Another deputy suggested that the two-term limit be retained but the number of terms reset to zero when Putin’s current term ends. Later that day — reinforcing the impression that this was a choreographed process — Putin appeared in the Duma to respond to the deputies’ suggestions. The two-term limit should not be removed, he said, though he was open to a reset in 2024 providing it was passed by the Constitutional Court and approved in the public referendum due to take place on 22 April.

Putin’s proposed changes, along with the reset at the end of his current term, have now been adopted by the Duma. The Constitutional Court is unlikely to stand in their way, and the popular vote, ironically occurring on the anniversary of Lenin’s birth, is likely to produce strong majority support. The way is open for Putin to remain in power, theoretically until 2036.

We can only guess at what was in Putin’s mind when he devised his constitutional amendments. Many observers believe that the driving force was simply his desire to remain in power well into the future, whether it’s to protect himself and those around him from possible retribution or to satisfy a lust for power. For others — and this is consistent with the justification hinted at in Putin’s speech — he is simply the most competent and appropriate person to guide Russia through troubled times.

But does Putin really want to be president for more than the remaining four years of his term? By 2024 he will be seventy-two years old, which mightn’t seem old until you consider that the current male life expectancy in Russia is 71.6 years. In recent years his demeanour has seemed much more world-weary, giving an impression that while he may not be eager to give up power he recognises the job is taking a toll. He has also frequently complained of making decisions that his ministers don’t always carry out. Yet the proposed constitutional change providing for Duma appointment of ministers could make those ministers even less responsive to the president (although he or she would still be able to dismiss them).

Perhaps the “competence in the face of adversity” argument is stronger. Russia faces a range of international challenges at the moment, including Covid-19, the oil price war with Saudi Arabia, strained relations with the West, economic sanctions, and the conflict in Syria. Domestically, living standards are under pressure, reforms to the economy are overdue, the health service and transport need major refurbishment, and a small but vocal opposition still takes to the streets. Putin may see himself as having the steadiest and most experienced hands in a turbulent international environment.

What isn’t clear is whether he really wants to be president into the future. He has not committed to stand in 2024; all he has done is to make that constitutionally possible. In the past he has said that he will step down in 2024, and although his word may not meet the gold standard for reliability, there is little strong evidence of a burning desire to remain president. There is, however, another reason why he may have agreed to create the conditions whereby he could remain in office well into the future.

History shows that the leadership succession is a point of vulnerability under strong-leader regimes like Russia’s. In the post-Soviet states, strongmen become vulnerable when their public approval ratings drop and they are seen as lame ducks. The existing limit of two consecutive terms will soon expose Putin to this possibility — and his public approval rating has already been dropping. A leader on the way out starts to lose the loyalty and commitment of those around him. They will be concerned to look after their own interests, which may be best served by allying with the next leader, if that person’s identity can be discerned. Constraints are loosened as different groups within and around the leadership begin to compete for the succession. Conflict and instability become likely.

By opening up the possibility that he could continue in office after his current term ends, Putin may be hoping to block any mobilisation of this kind in the upper ranks of Russian politics. For some time there has been talk of factional struggles within the Kremlin, with different observers identifying different groups and factions. Tension clearly exists. Putin has very successfully kept such differences under control, but as a lame duck leader his ability to do this would be impaired. Freed of the term limit, he may be able to dampen down potential conflict while retaining the option of either continuing as president himself or naming his successor, as he did in 2008.

In this light, these latest manoeuvrings around the constitution and its amendment may well be part of the continuing struggle around the presidential succession, which is still most likely to come in 2024. •

Graeme Gill is Professor Emeritus in Politics and International Relations at the University of Sydney.

Behind the action: US president Donald Trump arrives for a news conference on Covid-19 at the White House yesterday. Stefani Reynolds/CNP/AAP Image 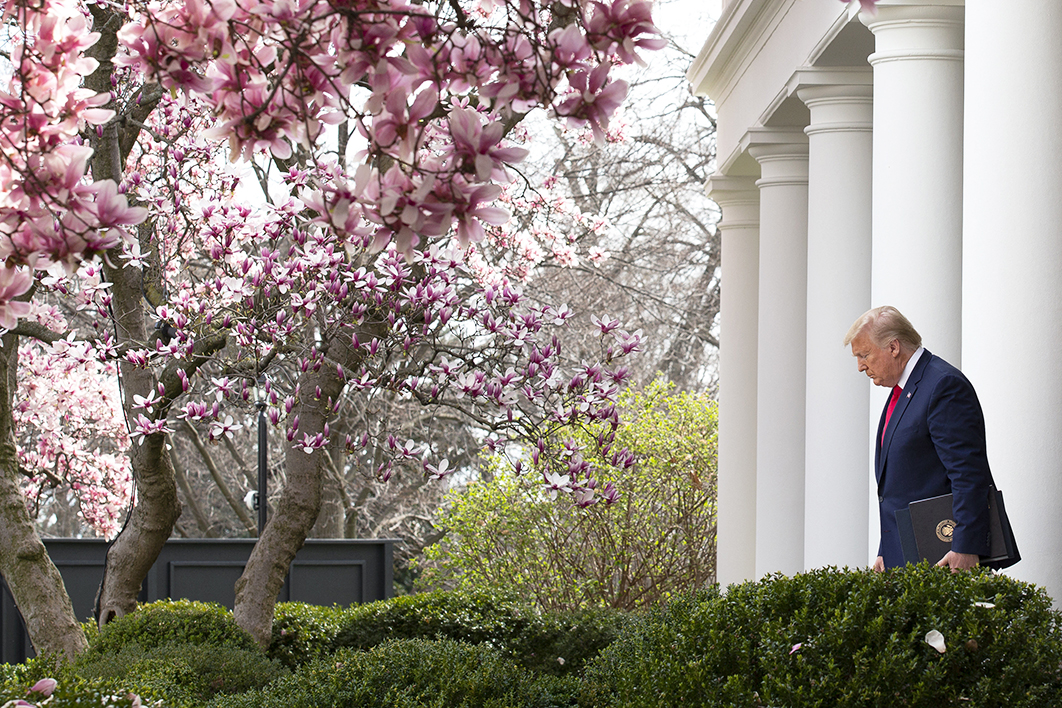 Behind the action: US president Donald Trump arrives for a news conference on Covid-19 at the White House yesterday. Stefani Reynolds/CNP/AAP Image