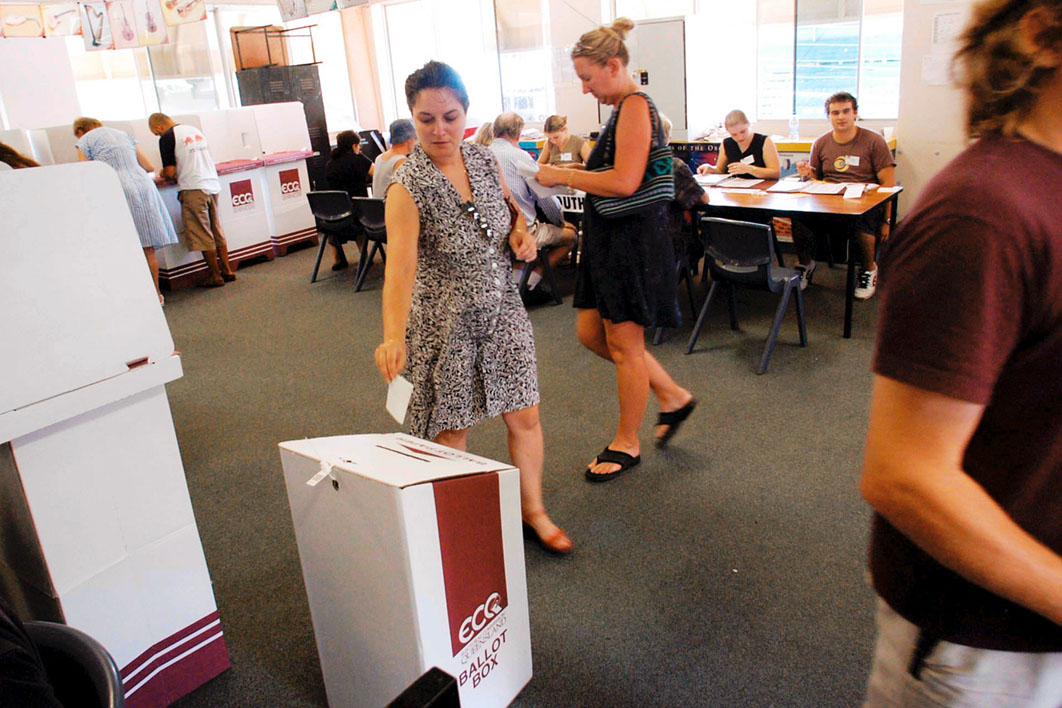 First published in the Australian, 28 November 2013

They are part of the Electoral Amendment Reform Bill 2013 which, as the LNP has about 90 per cent of the seats in the state’s single house of parliament, stands an excellent chance of becoming law.

The press release is here and the bill here.

The Electoral Act as it currently stands here.

Guarding against impersonation has been a thorny issue ever since the evolution of mass voting. In the very old days, in the United Kingdom, there was no problem because only the wealthy few men could vote, everyone knew who they were and voting was open. There was not even a written electoral roll.

This changed with the 1832 “Reform Act” which among other things expanded voting rights and laid out the procedure for producing the first codified rolls. When the Australian colonies began holding elections from the 1840s (in NSW) this was the procedure they inherited.

The risk of “personation” (as it was called then and some purists insist on doing today), or at least the perception of a risk, was ever present. Voting certificates, which electors got from the government in advance, were tried from time to time but were a hassle and expensive.

Like much of the argy-bargy around aspects of vote-enabling, the argument has long divided along “left” and “right” (or “progressive” and “conservative”) lines. People who don’t have voter ID are more likely to be poor and are more likely to vote left-of-centre.

In America, where the states determine who and how people vote for national elections, a slew of Republican administrations introduced voter ID laws between 2010 and 2012. There are several variations, as you can see here.

Political parties spend too much time playing politics with matters like this, damaging the public’s trust in electoral processes for, in the end, very little partisan gain.

It’s the fact of people being disenfranchised that matters, not their political persuasion.

The simple logistics of organising fraud along such lines in any meaningful way make it untenable. The numbers required would be large, and it’s never known in advance which electorates will be the closest ones.

After South Australia’s 2010 election someone wrote a letter to the state’s electoral commission and a newspaper claiming to (along with their family) have cast 159 fraudulent votes. The full letter has not, as far as I know, ever been published; but the available excerpts can be found on pages EM47–48 of this JSCEM transcript.

He or she wrote they “did this simply by using careful research and planning. The research provided names of those who could not vote, would not be voting, or needed assistance to vote.”

Writing a letter is easy, and no proof of anything. As far as I know they didn’t provide the list of people they impersonated, which would have added weight to their claim.

Like anonymously claiming to have poisoned a product in a supermarket, it’s just a form of vandalism, anti-social behaviour.

(The letter claimed “Our activities may or may not have influenced the outcome of the election” but 159 votes could not have changed the overall result.)

I understand why some people have an instinctive desire for the system to be less lax around the question of identification. But there is always a a trade-off between ID requirements and robbing people of their right to vote.

The way some, including politicians, jumped on the South Australian letter as “evidence” for something was worrying, and people who knowingly overstate the “problem” and consciously encourage lack of trust in the electoral process deserve contempt.

Anyway, Queensland’s “acceptable forms of ID,” according to the press release, will be:

According to the Attorney-General’s office, that letter from the ECQ would be a recent standard piece of correspondence from the commission, for example verifying that an elector who has moved residence has had their details changed.

So what does happen when a person gives a name to the official, and that name is on the roll, but the person doesn’t have appropriate ID?

They “will be required to make a declaration vote, similar to people who vote outside of their electorate on polling day”. That is, they will fill in and sign a declaration, and put it, and their filled-in ballot paper, in an envelope. The details will be checked and if all is well their vote will be counted.

The checking, presumably, will be of the signature, and perhaps date of birth. And that no one else has voted under that name.

Technically, this procedure doesn’t guard against the 2010 South Australian claimed fraud, but in reality the requirement to fill in a form, and interact more fully with an official, would be a strong disincentive.

It makes voting a bigger hassle for people without ID, which would be more of an issue under a voluntary voting system.

But, importantly, it requires no further action of the voter. That is, after they leave the polling station they don’t have to do anything more (which is not the case with, for example, provisional voting).

That, in my humble opinion, is fine thing.

Without more knowledge of the planned procedure, this legislation seems a reasonable compromise between inclusiveness and integrity.

It might even indicate the Queensland government is driven, in this particular change, by concerns about integrity and not simple partisan advantage.