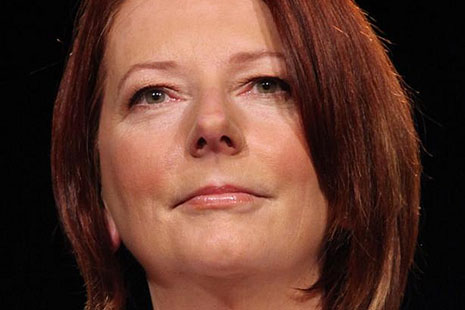 UNLIKE Julia Gillard, the board of the Williams Foundation – which “aims to strengthen Australia's national security by advocating the need for forward-looking policies and promoting constructive debate” – knows something about war. To listen to the prime minister is to gain the impression that Australia has never participated in an expeditionary war we didn’t like, especially because they “make us who are today.” These include wars strongly opposed by previous Labor leaders. At times, Gillard sounds so enthusiastic that listeners could be excused for thinking that a state of permanent war would provide wonderful tonic for Australian values.

The chairman of Williams Foundation, Errol McCormack, is a retired air marshal; his ten fellow board members are all former high-ranking military officers. Last September they endorsed a policy statement concluding that Australia should only support wars of necessity. In the foundation’s assessment, “A case can be made that of the many conflicts in which Australians have fought, only the second world war was a war of necessity.” As the statement put it:

For more than one hundred years Australian defence strategy has been based on “expeditionary” operations. If we are going to learn anything from the disasters of the last fifty years in Vietnam, Iraq, and Afghanistan, it should be that that model has failed politically, socially, militarily and ethically. Simply put, the era has gone in which predominantly white, predominantly European, predominantly Christian armies could stampede around the world invading countries their governments either don’t like or want to change… Without exception, wars lead to injustice and depravity. They also invariably generate unintended consequences, which may turn out to be worse than the alleged causus belli.

It is impossible to imagine Julia Gillard voicing anything remotely like those views. Since becoming PM, she has expressed support for every Australian military expedition since 1885, claiming they all help build national character. Nor has she shown the slightest sympathy for the Williams Foundation’s argument that the “deployment of expeditionary forces to invade another country immediately alters the dynamics of war. The land component of those forces will have to fight amongst the people of the invaded country — a circumstance which almost invariably creates profound social, cultural, and political tensions.” In this context, the foundation’s statement criticises the decade long “expeditionary war of choice in Afghanistan” as once again exposing the “delusion that foreign armies can successfully fight a war among the people of an invaded country when more often than not those people and the enemy are one and the same.”

The foundation argues that Australian strategic policy should regard a military response as a final resort, while also recognising that the ability to undertake “determined and decisive action is an essential part of deterring and controlling emerging risks.” It advocates a defence posture that “unambiguously distinguishes between wars of necessity and wars of choice; does not invent threats; recognises that there are things we cannot and should not do; explicitly connects our national security to that of our neighbours and is not an adjunct to someone else’s policy.”

The prime minister, however, has no problem with Australia participating in wars as an adjunct to some one else’s policy. In her speech to the US Congress on March 10, she said, “In the decades since [the second world war], we have stuck together. In every major conflict. From Korea and Vietnam to the conflicts in the Gulf.” Never mind that the Labor Party opposed Australia’s involvement in the Vietnam war on much the same grounds as the Williams Foundation — that it was an unwinnable war among the people of another country that posed no threat to Australia. Likewise Labor opposed the March 2003 invasion of Iraq, and was vindicated when the Howard government’s justification — that Saddam Hussein possessed weapons of mass destruction — quickly fell apart, as Australia’s Defence Intelligence Organisation had cautioned that it would. The invasion unleashed a deadly upheaval that is still unresolved. The new Iraqi government essentially sides with Saddam’s enemy Iran, which the Australian and US governments regularly denounce as a threat to the world. Yet Gillard applauds the way Australia and the US “stuck together” in producing this perverse outcome.

After Gillard met the US commander in Afghanistan General David Petraeus last year she took a much more hawkish line on the desirability of extending the ten-year-old war than President Obama. Echoing Petraeus’s approach, she said that Australian troops would remain in Afghanistan for at least another decade. In contrast, Obama, who wants to focus on fixing the economy, told Petraeus he would neither keep US troops there for another ten years nor spend another trillion dollars. Dutch troops have already withdrawn from Afghanistan; Canada’s Conservative government will withdraw all its combat troops next July. Britain, Italy and Germany are keen to get out. Yet our prime minister’s attitude seems to be that of an occupier, telling parliament last October that the withdrawal of Australian troops would not begin until she was “absolutely confident” Afghan forces could take an “irreversible” security lead. She later accepted that some would leave in 2014 in line with a NATO timetable. What would happen if the Afghan government demanded that all Australian troops leave by then is unclear.

Often, Gillard seems to have little grip on what Australia forces were actually doing during expeditionary wars. Her recent visit to South Korea provided a typical example when she said, “As Prime Minister, I’ve been determined to put a focus on the Korean War, to remind the nation of what our servicemen and women achieved here. This was an important war, where we fought for democracy and for the people of South Korea.” Australia was not fighting for democracy. The war ended in a stalemate in 1953, after Australia had fought on the side of a brutal and corrupt dictator against an even worst dictator in the north. Contrary to Gillard’s understanding, South Korea did not become a genuine democracy until 1987.

But the prime minister really went overboard when, in a speech in April to open a new Chinese–Australian war memorial near Brisbane, she lauded Australia’s participation in a series of expeditionary wars. Beginning with the deployment of a contingent of NSW troops to a colonial war in Sudan, she said that Australia’s involvement was “not only a test of wartime courage, but a test of character, that has helped define our nation and create the sense of who we are.” Gillard went on to claim, “We live in a free country — and in a largely free world — only because the Australian people answered the call when the time of decision came”.

In 1885, the NSW government sent 758 soldiers to Sudan to avenge the death of General Charles Gordon during a popular uprising against the country’s occupation by troops from British-controlled Egypt. Far from being a “test of wartime courage,” the contingent arrived too late to see any action before returning to Sydney. The deployment was a minor farce that has nothing to do with Australia’s freedom, let alone Sudan’s. Nor did it create an enduring “sense of who we are”— unless she means a country led by a prime minister with a wildly overblown view of what happened.

To her credit, Gillard raised human rights issues in China following the Korean leg of her north Asian trip. Unfortunately, it’s hard to accept her explanation that she did this “because of who we are and what we believe in.” In recent years, most Australian leaders have shown little willingness to protect the human rights of Australians, regardless of “who we are.” Gillard, for example, failed to protect the rights of WikiLeaks founder Julian Assange after the online publisher did the world a service last year by releasing batches of classified US diplomatic cables from a treasure trove of 250,000 documents. Gillard not only wrongly accused Assange of breaking the law, she refused to object to US politicians and commentators who called for his assassination. Opposition frontbencher Malcolm Turnbull was not so timid. In a speech at Sydney University in April, he said Gillard should have “registered our profound unhappiness that an Australian citizen is being threatened in this way by leading figures in another country.”

The biggest assault on hard-won human rights occurred with the Howard government’s introduction of over forty anti-terrorism laws that removed basic protections such as habeas corpus and reversed the onus of proof so the accused now have to prove their innocence. The indifference of Howard government ministers to the fate of an Australian citizen, Mamdouh Habib, is just one of the worst examples of their lack of regard for violations of basic rights.

We now know that US agents detained Habib in Pakistan in October 2001, where he was interviewed in the presence of officials from the Australian Federal Police, the Australian Security Intelligence Organisation and the foreign affairs department. US officials told Australian officials, including the head of ASIO at the time, Dennis Richardson, that they were considering “rendering” Habib to Egypt, which they did indeed do shortly afterwards. Habib was tortured for several months in Egypt before being transferred to the US military jail at Guantanamo Bay. He was released without charge in January 2005, after US prosecutors explained that they lacked evidence.

Richardson later told a Senate committee that ASIO knew that Habib was imprisoned in Egypt. But ministers had consistently denied that they knew were Habib was. None made representations to Washington to insist that Habib should not be tortured in Egypt in violation of both international law and the spirit of Australian law. Phillip Ruddock, who was attorney general, later claimed that Richardson had referred to Habib’s presence in Egypt, but had no proof.

On 25 April this year, WikiLeaks released classified US files on hundreds of prisoners at Guantanamo. Apart from revealing that many innocuous people had been detained for years, the files were riddled with errors. But they did reveal that the US officials said interrogators in Egypt had subjected Habib to “extreme duress.” Habib says that this demonstrates he was right to claim he had been tortured, something Howard government ministers never acknowledged. Following the WikiLeaks publication, the former Coalition foreign minister, Alexander Downer, said he would not change his mind about Habib, whom he called a “terrible person.” Even now, Downer cannot bring himself to say he is sorry that Habib was tortured – despite Gillard’s claim that concern for human rights is part of “who we are.”

Nor does the present foreign minister, Kevin Rudd, display a deep concern for human rights. Although Rudd professes to abhor terrorism, this belief wasn’t apparent while he was seeking to impress an audience during a speech at the King David Hotel in Jerusalem in March this year. Representing Australia, Rudd said that Menachem Begin “undertook some interior redesign” at that same hotel. This sick attempt at humour was a reference to how Begin’s terrorist group killed ninety-one people when it blew up the British-occupied hotel in 1946. If Gillard is to be believed, a succession of expeditionary wars has helped define Rudd’s values. Perhaps it did. But joking about terrorists blowing people up is probably not what Gillard had in mind. •

The Internet Movie Database changed the way we think about films, and now it’s influencing the industry itself, writes Richard Johnstone

Shown here with Everett Marshall, Dolores del Rio is wearing a gown by Orry-Kelly, “one of Australia’s greatest cultural exports,” in I Live for Love, 1935. 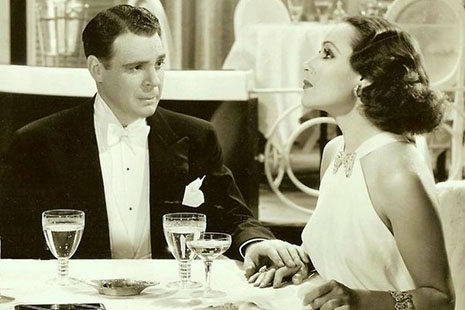 Shown here with Everett Marshall, Dolores del Rio is wearing a gown by Orry-Kelly, “one of Australia’s greatest cultural exports,” in I Live for Love, 1935.