For people on Kiribati and Tuvalu facing increasing climate pressures, the description “refugee” has too many negative connotations, write Jane McAdam and Maryanne Loughry 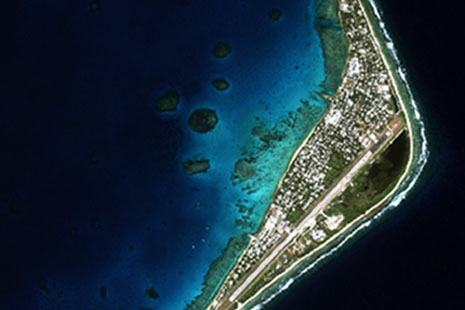 OVER THE PAST DECADE a new term has entered the lexicon of policy makers and the media: climate change refugees. Human movement caused by environmental factors – drought, land degradation or significant climatic events (like cyclones) – is not new; what is new is the number of people now thought to be susceptible to such pressures. In a recent report, The Anatomy of a Silent Crisis, Kofi Annan describes millions of people suffering – and ultimately being uprooted or permanently on the move – because of climate change. According to the UN High Commissioner for Refugees, it is becoming difficult to categorise displaced people because of the combined impacts of conflict, the environment and economic pressures.

The spectre of climate change has also focused attention on the small Pacific nations of Kiribati and Tuvalu. Straddling the equator, these former British colonies – once known as the Gilbert and Ellice Islands – gained their independence only three decades ago. In recent years they have featured in media reports as “sinking islands” that will be uninhabitable by the middle of this century, with their people becoming the world’s first “climate refugees.” Kiribati has a population of around 100,000, while Tuvalu, with only 10,000 people, is the world’s smallest state apart from the Vatican.

As researchers with an academic interest in forced migration, we recently visited Kiribati and Tuvalu. As we drove along the main road on the central Kiribati atoll of Tarawa, with the lagoon on one side and the ocean on the other, the sense of vulnerability was palpable – and that feeling is magnified when there is an extreme event like a cyclone or king tide. But are the apocalyptic projections about these two nations, and their people, accurate?

While they face very similar challenges, Tuvalu and Kiribati are not identical in their approach to the pressures generated by climate change. But in both countries we found a wholesale rejection of the “refugee” label, at both the political and community levels. For the people of these small Pacific nations, the term refugee evokes a sense of helplessness and a lack of dignity that contradicts their very strong sense of pride.

It’s important to remember that people at risk of environmental or climate displacement are not “refugees” as a matter of law. A refugee is someone who has a well-founded fear of persecution on account of their race, religion, nationality, political opinion or membership of a particular social group, who is outside their country of origin and whose government is unable or unwilling to protect them.

Even as a merely descriptive term, the refugee label is at best pre-emptive, and at worst offensive, for those to whom it is applied. In both Kiribati and Tuvalu people resoundingly reject it. At first, we could not grasp why, despite its legal inaccuracy. As scholars of forced migration, we view refugees as very resilient, capable people who have overcome adverse situations to secure protection for themselves and their families. Many refugees make a significant contribution to their new societies, including some who have achieved fame in their fields of endeavour: politician Madeleine Albright, Czech writer Milan Kundera, scholar Edward Said and artist Judy Cassab, for example.

But in these small Pacific countries, which are not themselves signatories to the Refugee Convention and whose languages do not even have a word for refugee, the term has many negative associations. We wondered whether this was partly a response to the draconian policies implemented under the Howard government, particularly the Pacific Solution. (Tuvalu, for example, was approached as a site for an offshore detention centre, but declined.) But the reaction seems to run far deeper than that. Interestingly, it highlights some of the central failures of the international system for providing protection to refugees and other displaced people, most notably the failure of many countries to provide assistance and accommodation, leaving millions of refugees in camps or leading precarious lives in bordering countries.

In part, the discomfort with the refugee label stems from the fact that, by definition, refugees flee their own government, whereas the people of Kiribati and Tuvalu have no desire to escape from their countries. (The exceptionally low rate of visa overstayers from Kiribati in Australia suggests that these are people who like being at home.) They say it is the actions of other countries that will ultimately force their movement, not the actions of their own leaders. (These countries have some of the lowest emissions rates in the world.) There are also fears that the refugee label connotes victimhood, passivity, and a lack of agency. In Tuvalu and Kiribati refugees are viewed as people waiting helplessly in camps, relying on handouts, with no prospects for the future. To be a refugee, in their eyes, is to lack dignity. Some men told us that for them, being in such a situation would signal a failure on their part to provide for and protect their family. Tuvaluans and i-Kiribati people don’t want to be seen like that – they want to be viewed as active, valued members of a community.

For this reason, the president of Kiribati is trying to secure options for labour migration to Australia and New Zealand so that those who want to move have an early opportunity to do so, and can gradually build up i-Kiribati communities abroad. This long-term strategy would see gradual, transitional resettlement so that, if and when the whole population has to relocate, communities and extended family networks would already be functioning in their new home countries. The president hopes that in this way, i-Kiribati culture and traditions will be kept alive, and that his people will also be able to adapt to new cultures and ways of life.

Nevertheless, the government of Kiribati also recognises that migration schemes will eventually need to be accompanied by humanitarian options. It is keen to secure international agreements in which other governments recognise that climate change has contributed to Kiribati's predicament and acknowledge that they are obliged to assist with relocation. The government of Tuvalu, on the other hand, does not want relocation to feature in international agreements. It fears that industrialised countries may simply think that they can solve problems like rising sea levels by relocating affected populations rather than reducing carbon emissions, which would not bode well for the world as a whole.

Interestingly, despite the rejection of the refugee label, governments in both Tuvalu and Kiribati recognise that certain principles of refugee law might have a place in addressing questions about legal obligation, and that some features of the refugee protection regime are pertinent to the present problem. One government official in Kiribati conceded that a framework akin to that of the Refugee Convention, minus the refugee tag, would be welcomed.

Both governments have at various times sought relocation options in other countries, most notably Australia and New Zealand. Just this month it was reported that Indonesia had offered to rent out islands to countries affected by climate change. And the Maldives, another island state, has talked about buying up land in India or Sri Lanka. But there is much more to relocation than simply securing safe territory; those who move need to know that they can leave and re-enter the new country, enjoy work rights and health rights there, have access to social security if necessary, and be able to maintain their culture and traditions. They also want to know the citizenship status of children born there. At present, there is little in international law to prevent a host country from expelling people should it wish to do so. If en masse relocation to another country is being considered as a permanent solution, then the situation will be far more complex than a standard immigration plan. In the absence of territory formally being ceded to the affected country, there needs to be security of title and immigration and citizenship rights for those who move.

There is also a real question about what role climate change plays in this scenario. Neither of us is a climate change sceptic, but we recognise that movement from these countries involves multiple pressures that may affect individuals and families in different ways at different times. As one government official in Kiribati observed, climate change overlays pre-existing pressures – overcrowding, unemployment, environmental factors and economic development – which means that it may trigger a tipping point that would not have been reached in its absence.

The view is somewhat different in Tuvalu. There, some government officials worry that highlighting the complex and multifaceted dimensions of movement will shift the focus away from climate change, and that the magnitude of that problem warrants maintaining attention solely on its impacts. Yet we were intrigued to hear that whereas ten years ago any community meeting related to climate change would draw a large crowd, interest has died down in recent years. Perhaps this was because the doomsday scenarios advanced a decade ago have not eventuated. While people could describe recent changes to the environment, weather patterns and local resources – changes they attributed to climate change – they also felt that they could adapt to them over time. We were also confronted with the belief that God had promised Noah that there would be no more floods and God could be trusted to keep this promise today.

Certainly the impact of climate change on low-lying atolls must not be underestimated. But there is a risk that solely focusing on climate change obscures other social changes that together provide a more realistic explanation of why people act in particular ways, including whether they stay on their atolls or seek to migrate elsewhere. Such an approach acknowledges the role of climate change in exacerbating existing social, economic and environmental pressures.

This is not to suggest that complacency is an appropriate response. Rather, it is important to work with the people of Kiribati and Tuvalu to develop sustainable solutions that enable those who wish to remain to do so for as long as possible, and that facilitate the gradual movement of families and communities to help ease the transition for movement over time. While raising the profile of these countries and their future is crucial, so too is garnering international support, creating sustainable and harmonised solutions, and listening to the voices of those concerned so that migration can become part of a broader adaptation response.

Talk of sinking islands and climate change refugees may stimulate media interest and the popular imagination, but it is an oversimplification of the reality and suggests a situation of movement (or preparation for movement) which simply does not exist. The process itself is likely to be far less dramatic than the Atlantis-style predictions. People are not fleeing, but they are reluctantly recognising that at some point in the future their home may no longer be able to sustain them. Many have family or friends living abroad, and we quickly learnt that mobility is, as in many Pacific countries, a historical pattern that continues to this day. •

Jane McAdam is Director of the International Refugee and Migration Law Project at the Gilbert + Tobin Centre of Public Law at the University of NSW and holds a three year Australian Research Council Grant, Weathering Uncertainty: Climate Change “Refugees” and International Law. Maryanne Loughry, Associate Director of the Jesuit Refugee Service (Australia), is a psychologist who researches the psychological and social effects of forced migration and is presently piloting a study on the human dimensions of climate change in the Pacific.