The deaths in Athens last week raise profound questions about the state of Greece, writes Giannis Efthymiou, who was among the protesters on 5 May 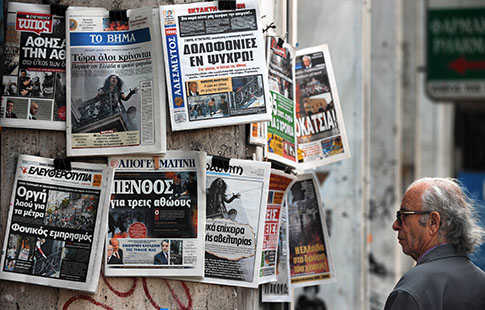 Above: A man checks newspapers in Athens on 6 May, the morning after a fire-bomb killed three people in the Greek capital.
AFP Photo / Dimitar Dilkoff

MUCH has happened in Greece since the violence of Wednesday 5 May. Although the new austerity measures have not yet been put into effect, their likely impact on our lives is the talk of the town. I think we are standing at the border of exceptional times.

If you go out for a stroll on a weekday you might come to the conclusion that nothing has changed: the traffic on the streets is more or less the same, people holding shopping bags are looking at shop windows as usual, and more or less the same number of people are drinking their coffee in the sunshine. But if you take a closer look you might notice that discussions among people mostly revolve around what is going to happen next. If you take a closer look at the prices – in a supermarket, let’s say – you might notice that they have increased since the last time you looked. Then you look around you and see that other peoples’ faces tell you that what you were thinking is correct.

Some of them might also tell you that the worst is still ahead, that this is nothing compared to what will follow. This is the prevailing sense that flows around us: confusion and gloom. Everyone is blaming everyone for the situation we are in. It’s the politicians’ fault, the state is to blame, it’s the European Union, the International Monetary Fund, the Germans, the public servants – or it’s those who go on strike and those who don’t, we are to blame, they are to blame… For the time being it feels like we are moving in circles. I believe that the majority of people are struggling with their own uncertainty. Amid this struggle we live, act and make plans and choices.

It’s been a week since one of the biggest demonstrations in the past fifteen years took place here in Athens. The new austerity measures were due to be voted on in the Greek parliament the day after, on 6 May. They had to be implemented in order for Greece to be able to borrow money from the European Central Bank and the International Monetary Fund – to “save itself from bankruptcy,” as government officials put it, and to “overcome economic problems and weather the storm.”

The General Confederation of Greek Workers and the Civil Servants’ Confederation, the primary unions of the public and private sector, had declared a general strike to oppose the measures. This meant that almost everyone was on strike that day and many of us were out on the streets to protest. The first sign that there really were a lot of us was when I couldn’t find my friends or acquaintances, although we said that we would meet at a particular place. (Later, the mainstream media talked about 200,000 participants, an unusual number even for Greece.) At some point we finally met up, but all we could see were large groups of people merging with each other and numerous banners, each with a different slogan. In the meantime, I had bumped into people I hadn’t seen for ages – people I wouldn’t expect to see at a demonstration of any kind.

Nearly two hours passed after the time to assemble and, with the centre of Athens packed, we were all eagerly waiting for the demonstration to start. I think that many of us, talking together in small groups, were trying to guess how the situation would develop. The ambience was enigmatically tense. Despite walking up and down the sidewalk, back and forth, we had no clear idea where the head of the demonstration was, and where was its tail. But eventually we all started walking, heading for the parliament building at Syntagma Square.

Somehow, the crowd was enthusiastic and petulant at the same time. Some people were shouting slogans, others were walking quietly and looking around them. Many were holding hands and forming human chains. Some women had even brought saucepans and they were hitting them with scoops, which was something new for a demonstration in Greece. At times the slogans grew louder and more intense. No one was simply watching the demonstration passing by without becoming a part of it, as often happens. I sensed that many of us had a mixed feeling of joy and subtle unease.

In the beginning the riot police were taking a low-key approach. Whenever they made an appearance they were somehow pushed back by the protesters. Surprisingly, most people remained calm when things began to get bumpy, despite sporadic tear gas and flash grenades. But as the demonstration drew closer to Syntagma Square things changed dramatically. Some protesters tried to invade the parliament building but were pushed back, and that was when the police started making their move. They filled the square with tear gas and started throwing flash grenades into the crowd, coming down on everyone they could find.

The strange thing is that the people were standing up to the police. Eventually, some became furious, and then, in a matter of minutes, the situation seemed to explode. Ordinary people, from young students to their teachers, from middle-age employees to retired men and women, from radical anarchists to people of no fixed political position, were throwing stones at the police and cursing the politicians. The main slogan shifted from, “We haven’t stolen anything. We won’t pay for anything” to “Burn the parliament!” (The translation doesn’t fully express the highly offensive tone of that slogan in Greek.) The clashes with the police were hard and lasted for more than three hours.

On that day several department stores had their windows smashed. Some banks and many government buildings, including the Athens Prefecture and a branch of the economics and finance ministry, were attacked and nearly burnt to the ground. The worst? The worst thing is that in one of these banks people were still “working” (you cannot really work when 200,000 people are protesting outside your door about things that, whether you like it or not, have something to do with you). They could neither go on strike nor leave earlier, because the managers of the bank told them they would lose their jobs if they did so. They were literally locked inside the bank: they couldn’t come out the front door because it was locked from the outside, and that particular bank had no emergency exit, no fire protection. When the first molotov cocktail was thrown, they put out the fire. But they didn’t manage to do the same with the second one, and soon the whole building went up in flames. Some of the employees managed to save their lives by jumping to the nearby roofs, others by going out onto a balcony facing the street. But three of them didn’t have the same luck. Two young women and a young man suffocated inside a bank in the centre of Athens.

That’s the unimaginable thing. That we – and by “we” I mean the whole 200,000 of us – lost three of our own. Instead of liberating them, instead of breaking locked doors or bringing down the walls between us, we took their lives. This, I believe, gives shape to a major contradiction of the country in which I live. Here, and more especially in this city, we are in some ways capable of being tremendously close to each other and at the same time purely and irreversibly alone. Now, we have to face each other again. We have to reflect on our attitudes. We need to make room to communicate, to speak to one another. We must re-invent dialogue between us and maybe then we can find a way of giving alternative (that is, our own) meanings to the concepts of “crisis” and “protest.”

At this point only questions come to my mind. Questions that have to do with how we can overcome this crisis. I feel that this is a chance for us to come closer and collectively reclaim our lives. Will we remain in limbo, letting others remain in control, or will we use our imagination? Are we able to come up with new themes for our protests, new ways to think for ourselves about our daily lives? Does it really have to do only with money? I believe our present situation provides a kaleidoscopic view of a highly uncertain future. We might have raised once again more questions than we can answer. • 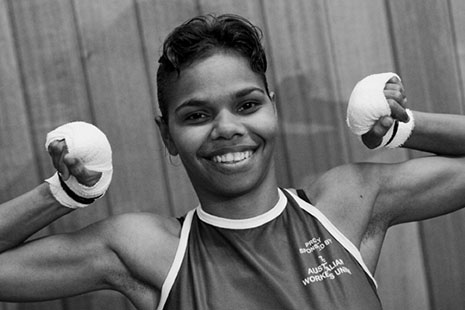