Welcome to the Titanic

Andrew Leigh compellingly describes the “black swan” events we could be facing, but are his proposals equal to the threat? 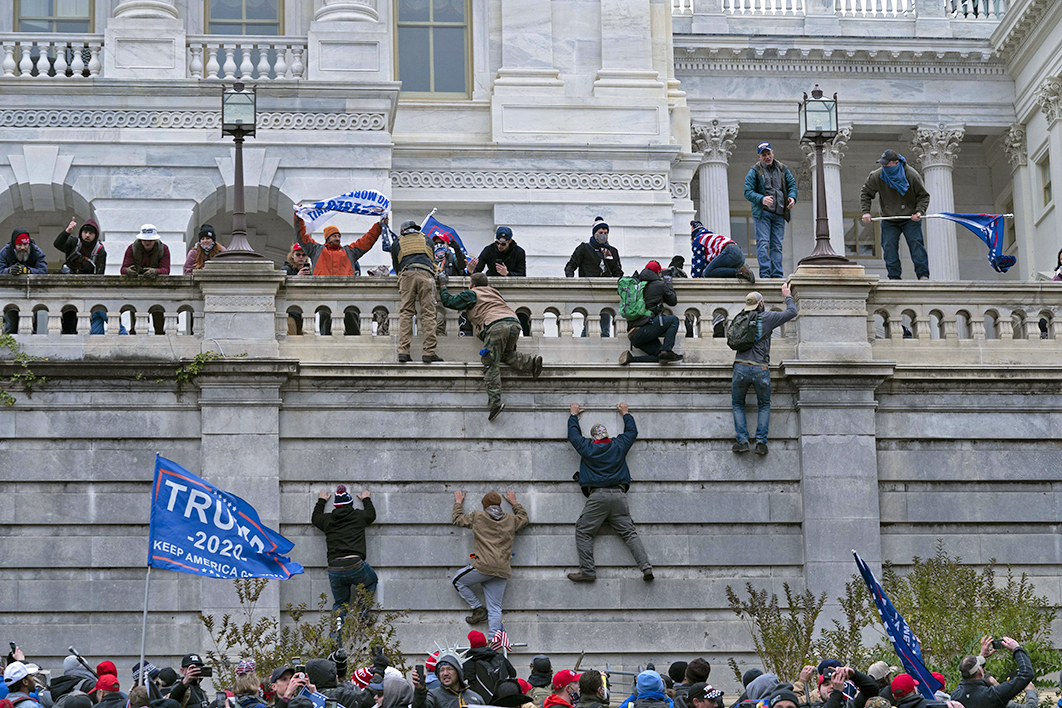 Part of the problem: supporters of Donald Trump storm the Capitol building on 6 January this year. Jose Luis Magana/AP Photo

If sheer brainpower were the dominant criterion for seniority on a political party’s frontbench, Andrew Leigh would have been made opposition leader years ago. In the meetings that he and I attended during the five years in which we overlapped at the Australian National University, Andrew was always the smartest person in the room. Not that he asserted so himself. He has a healthy intellectual self-confidence but also a small ego and considerable humility. He just was.

Fortunately for us readers, Labor’s factional politics and small-target tactics have prevailed, and so Andrew has time to spare beyond fulfilling his duties as shadow assistant minister for Treasury and charities, and indulging his (tri)athletic obsessions. Ever the academic nerd and policy wonk, he spends that time writing books explaining complicated matters to ordinary people. Reasonably smart people, that is: his books are full of studies, stats, and references to the arts as well as popular culture. Combining erudition with lucid, brisk, even playful prose, he doesn’t seek merely to inform and educate; he also offers some form of practical advice or policy advocacy (“What we can/should do to…”).

Since joining parliament in 2010 he has researched and published no fewer than eight such books: Battlers and Billionaires: The Story of Inequality in Australia (2013), The Economics of Just About Everything (2014), The Luck of Politics (2015), Choosing Openness: Why Global Engagement Is Best for Australia (2017), Randomistas: How Radical Researchers Changed Our World (2018), Innovation + Equality: How to Create a Future That Is More Star Trek Than Terminator (with Joshua Gans) (2019), Reconnected: A Community Builder’s Handbook (with Nick Terrell) (2020), and now What’s the Worst That Could Happen?

The Australian parliament has seen its share of high-calibre thinkers in its 120 years of existence, but I can’t think of anyone with the sheer ability and stamina to write thoughtfully across such a broad range of subjects on the margins of a demanding day job as an MHR.

Leigh’s latest offering is about “black swans”: those nasty events with devastating effects whose probability is either low or hard to determine. In other words, what most of us once thought were the chances of a global pandemic. Corporate managers and public policymakers alike are baffled by black swans: should we focus on their impact, and thus go all out in taking preventative or preparatory measures? Or should we focus on probability and therefore prioritise risks whose probability is higher or at least clearer?

Going down the first path may expose policymakers to charges of overreacting — of wasting resources on obscure hypotheticals. Remember Y2K? The doom scenarios that were bandied about in the years leading up to the turn of the millennium never came to pass. Although some claimed this was precisely because so many risk managers and policymakers had taken ambitious and costly precautionary measures, majority armchair opinion is that countless millions were needlessly invested in forestalling a disaster that was never going to happen.

But taking a more relaxed view risks us bearing the brunt of improbable yet devastating crises for which we have been left unprepared. In that scenario, policymakers face the prospect of intense blame for what feels, after the event, like a callous and cavalier disregard of real dangers.

Leigh surveys the state of our knowledge, and our guesstimates about the upper range of black swan events: potentially civilisation-extinguishing mega-catastrophes. The candidates he covers in brief but fact-packed chapters include ultra-lethal germs and bugs (naturally occurring or engineered and weaponised); runaway climate change; nuclear war; and runaway artificial intelligence (“killer robots” and the like). Drawing on an impressive array of studies, he dazzles us with statistics and analogies, mostly to make the point that each of these four doom scenarios is (a) not as unlikely as most of us prefer to think, and (b) getting likelier because of our overwhelming passivity in the face of their technological and other enablers.

Then, about halfway through, the book’s focus shifts to populist politics. Why? For one, because countries run by populists are bound to be short-sighted, stupid, lazy and opportunistic in coping with deep systemic threats. As Leigh explains, “Tackling long-term threats requires four things: strong science, effective institutions, global engagement, and a sense of cooperation and order. Populists are anti-intellectual, anti-institutional, anti-international, and anti-irenic (‘irenic’ means to strive for peace and consensus).” This posture is at the heart of their popular appeal — and denialist myopia with regard to systemic risks is its inevitable by-product.

But there’s more: Leigh also argues that populism itself becomes a potentially destructive force when “populist democrats become authoritarian demagogues — quashing democracy and ushering in a frightening future.” Tapping into the burgeoning “death of democracy” literature, Leigh paints a gloomy picture of what might happen when the Trumps, Orbáns, Modis and Bolsonaros of the world succeed in entrenching their populist regimes: authoritarian repression at home, foreign-facing aggression and, at the very least, irrational inaction regarding the creeping systemic risks that need to be tackled urgently.

Having presented diagnoses as gloomy as this, authors of doomsday books have two choices when it comes to dealing with the “what now?” question.

Option 1 is to come up with measures that are proportionate to the magnitude of the threats. A good example of an author who has followed this path is Yehezkel Dror, the Israeli-born grandfather of modern policy science. Now well into his nineties, Dror has continued to produce books that starkly catalogue how humanity is busily beavering away at worsening the odds of its own survival, which he then matches by calling for transformational political leadership to combat complacence and bring us back from the brink of destruction in the many crises we will face. His books’ titles speak for themselves: Avant-Garde Politician: Leaders for a New Epoch (2014); For Rulers: Priming Political Leaders for Saving Humanity from Itself (2017); and Steering Human Evolution: Eighteen Theses on Homo Sapiens Metamorphosis, Routledge (2020).

Dror’s proposed solutions are radical indeed: he advocates a transnational global directorate of rulers populated by carefully selected, superbly trained and enlightened technocrats whose sole preoccupation is with the survival of the species, backed up — and here’s the sting — by awesome military might to enforce its decisions. It is a daunting and deeply controversial policy recipe, but at least one that is commensurate with the challenge of the preceding diagnosis.

Leigh doesn’t go down that path. His final chapter is of the Option 2 variety: to talk the language of pragmatism and offer small, practical steps that should somehow add up to a transformation of our catastrophe-inducing, vulnerability-enhancing practices, beliefs and power relationships. Bypassing the bulk of scenarios in his own risk catalogue and focusing entirely on staving off what he clearly sees as the mother of all systemic risks, a populist takeover, Leigh proposes we turn our hand to what he calls “fixing politics.”

As it turns out, he talks mostly about fixing American politics, rather than, say Chinese, Russian, Indian or even Australian. And in doing so, he leads us into humdrum territory: recommending compulsory voting, moving polling day to the weekend, creating independent bodies to recarve electoral districts, strengthening civics education.

These are all sensible and worthy “maintenance” measures within existing democracies. But the glaring discrepancy between diagnosis and solutions reminded me of Al Gore’s An Inconvenient Truth, which after scaring the hell out of its readers by painting a stark 200-page picture of apocalyptic climate change culminated in a tucked-away two-pager of “what you can do”s. Gore admonished his readers to unscrew a few lightbulbs around the house, turn the thermostat down a bit and put on a warm sweater in winter. It just didn’t cut the mustard.

And the same holds true, regrettably, for this book. Gone by its end are the sweeping time horizons with which the book began; virtually all we are left with is muddling-through institutional tinkering for Americans. So, while What’s the Worst That Could Happen succeeds admirably in putting us on our toes about the risks we face, it doesn’t turn up the heat on our leaders, or indeed ourselves, about what has to come next.

Perhaps Andrew can put that formidable brain of his to work on a follow-up book that delivers a much-needed roadmap for transforming our economies, our ways of life, our conceptions of citizenship and our political institutions — the things he knows are urgently required to give his and our great-grandchildren a fighting chance to lead reasonable lives on an already stressed planet. •

Paul ’t Hart is professor of public administration at Utrecht University, the Netherlands, and co-author of Governing the Pandemic: The Politics of Navigating a Mega-Crisis, available on open access.

Why has the National Film and Sound Archive suddenly found political favour? 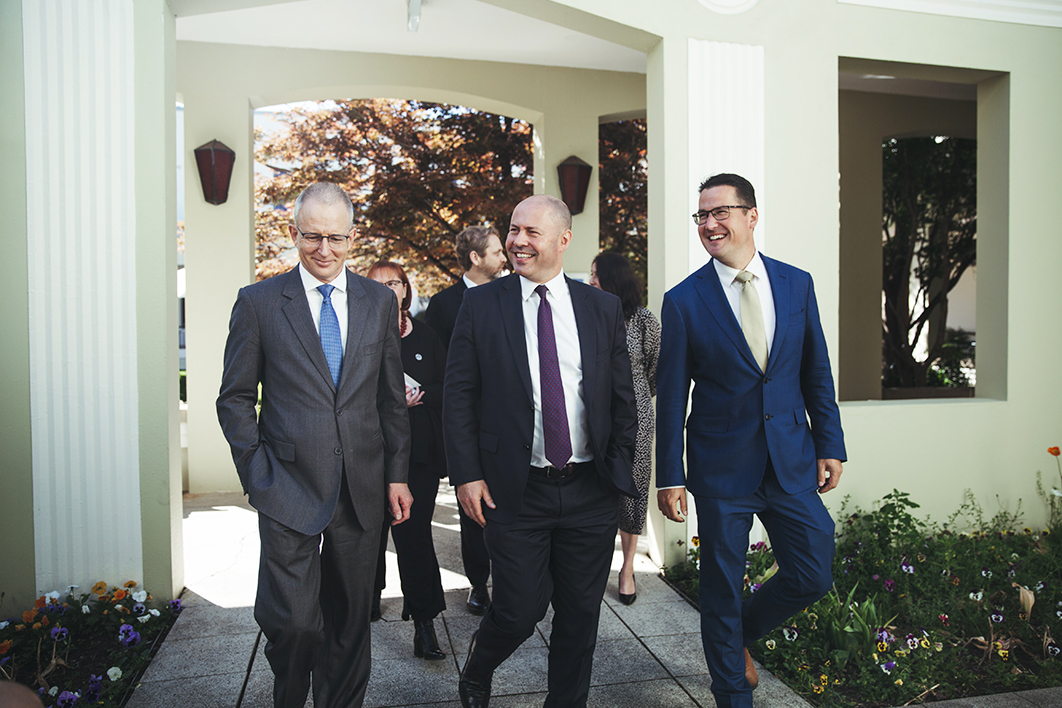