What are we talking about when we talk about China?

Books | Is China a different kind of democracy, or simply a self-preserving one-party state? 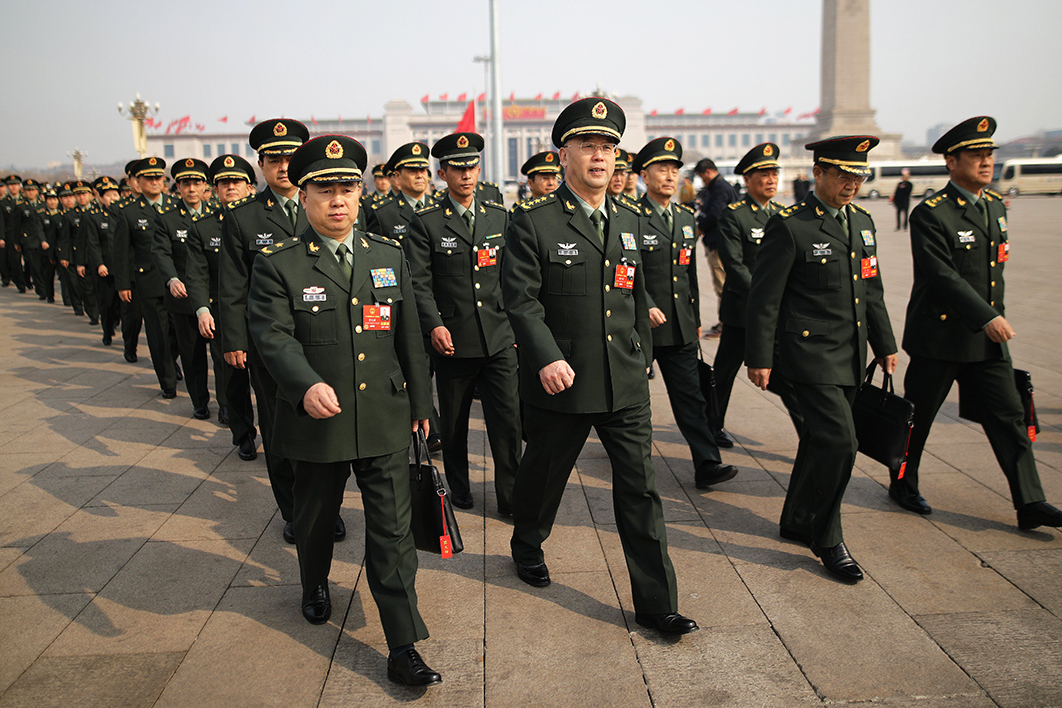 Chinese democracy: military delegates arrive for the first session of the 13th National People’s Congress at the Great Hall of the People in Beijing earlier this month. Wu Hon/EPA

The Australian debate about Chinese influence-peddling and interference operations has largely overlooked this question: what are we contending with? Exactly what kind of country is China?

What better way to get a fresh perspective on this question than to take two political scientists with little prior knowledge or experience of contemporary China, introduce them to some of China’s own leading analysts, immerse them in the published literature and data about the People’s Republic, and invite them to write a book that makes sense of what they have learned using the tools of comparative political analysis?

John Keane and Stein Ringen are political scientists with impressive academic credentials and little previous exposure to China. Keane is based at the University of Sydney after an extended period teaching and writing about politics in Europe. During his time abroad, the ABC lauded him as “one of Australia’s great intellectual exports.” Ringen is a Norwegian political scientist based at Oxford University.

Keane and Ringen share a distaste for the term “authoritarian” as it appears in standard political science literature and in specialist works about China. Keane challenges the use of the term in the titles of influential studies and the analytical frameworks adopted by their authors. He dismisses authoritarianism as a convenient label, or “mantra,” employed by blinkered observers to distract readers from the protean experiment that is China and to blind them to what the country has to offer to the world.

Ringen, who has studied authoritarianism before, objects on different grounds. After immersing himself in the Chinese case, he forms the view that what he sees bears little relation to what he has studied in Korea and elsewhere. In approaching China, he agrees with Keane that we should discard the term authoritarian altogether.

The two authors are also in general agreement about the nature of their subject matter. Keane sees corruption; nepotism; a widening wealth gap; intolerance of religion and dissent; environmental spoliation; censorship; widespread arrests of political opponents, rights activists and lawyers; and state officials acting like “thugs.” Ringen observes similar features, comments on them at greater length, classifies them in systemic terms, and relates his observations to his larger argument.

Both also agree that the Chinese one-party state is strong and resilient, although here they differ in the grounds on which they base their judgements. Keane believes the one-party state is enduring because it enjoys popular support, Ringen because it is single-minded in its commitment to control, innovative in devising new mechanisms of control, and ruthless in its willingness to deploy force.

So, although they start out from the same point and identify similar features along the way, the two authors arrive at polar extremes in their classification of the Chinese state. Keane finds China democratic, Ringen a perfect dictatorship bordering on totalitarian.

The journeys that carry them to these different destinations are worth tracking closely. Coming to China after completing a detailed study of social and economic developments in authoritarian-era South Korea, Ringen is struck by the differences. In contrast to South Korea, the China he finds is a one-party state with no separate civil service and no organised civil society to speak of, with non-government organisations that are basically off-budget arms of the state, and with a business community that is either embedded in the party or in thrall to it. The party rules by diktat. Apart from its size, he argues, there is little remarkable about China’s achievement relative to South Korea’s, whether measured by economic development, wealth creation, equity, or any form of evolving social compact. China’s achievements are overrated and its “model” in need of clearer elaboration.

As an aid to clarification, Ringen lays out three plausible hypotheses on the nature of government in China and tests them against what he finds. One is that China is a “trivial state,” a state that exercises control for no purpose other than self-preservation. Another is that China is plausibly a “welfare state,” with a purpose beyond itself that works for the good of citizens and is not overly ideological. The third option is that China is a “power state,” in which the party is an instrument of ideology and the state an instrument of the party. On the basis of his observations and comparative analysis, he concludes that China is a powerful “trivial state,” in search of an overarching ideology that could take it to the next level.

Keane’s approach is very different, more akin to the style of Jonathan Swift introducing readers to the people of Brobdingnag than to Ringen’s style of comparative politics. Readers are advised at the outset to set aside all preconceptions and “explore their own ignorance” before following Keane to a land that is “not what it seems,” indeed “almost a fictional place.” China, he informs us, is a “state of mind” among foreign observers, a “way of using words.” In keeping with these observations, he randomly scatters Mandarin words and phrases throughout the text — not in Chinese script but in borrowed Pinyin spelling — as if to acquaint his readers with the touch and texture of the words that make up the curious state of mind that is China.

His signature contribution is to sum up his findings in the observation that China is a “phantom democracy.” But readers should not be misled into thinking poorly of China on this account. Phantasms have had a bad rap since Plato, and need to be rescued by contemporary theorists who can see them for what they really are, which is to say, real. “Anybody who has experienced a mirage understands their materiality,” writes Keane. And what democracy is not a phantom after all?

He finds that the omnipresence of the word “democracy” in Chinese films, in textbooks, in uplifting speeches and declarations, in conversations with visiting scholars such as himself, suffices to warrant China’s inclusion in the ranks of democratic countries. In his subjects’ constant use of the term “democracy,” Keane discerns in China a rising trend towards a government willing to win the consent of the governed through innovative governance techniques, including local elections, opinion polling, and time limits on officeholders.

In the months since the publication of Keane’s book, the party has introduced a number of further innovations, including street-corner electronic monitors using facial recognition technologies, and personal “social credit” ratings, based on big data and artificial intelligence, that can block train and air tickets to citizens trying to head home for the Spring Festival. It is proposing to arrest likely perpetrators in advance of their crimes, using predictive modelling also based on artificial intelligence. Most recently, the party recommended that the National People’s Congress should abolish term limits on the office of president, and China’s parliament duly complied. To all appearances, Xi Jinping is introducing, and pioneering, twenty-first-century totalitarian techniques on an unprecedented scale. But that too may be a mirage.

And so, to return to our original question: what is it that we are dealing with? Readers wanting to understand China shouldn’t have too much trouble judging which of these authors has a useful perspective to offer. ●

John Fitzgerald is an Emeritus Professor in the Centre for Social Impact at Swinburne University of Technology.