What has the Bali Process got to do with it?

The amendments to the Migration Act rejected by the Senate would have reduced the incentive for the federal government to pursue refugee protection through the Bali Process regional cooperation framework, writes Savitri Taylor 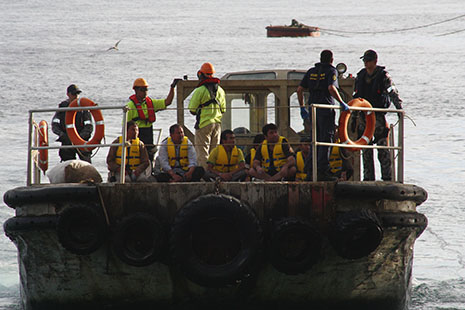 A boat carrying asylum seekers arrives at Christmas Island on 28 June 2012, the day after the House of Representatives debated amendments to the Migration Act.
Photo: Rossbach/ Krepp/ AAP Image

AT 1.30 last Wednesday afternoon the prime minister, Julia Gillard, informed the House of Representatives that there had been “a second incident with an asylum seeker vessel.” The first had occurred a week earlier in the Indonesian search and rescue zone with the sinking of a vessel that had departed from Sri Lanka carrying about 200 asylum seekers. Ninety people died. The incident unfolding as the PM addressed parliament on Wednesday resulted in four deaths; the other 130 people aboard the capsized vessel were rescued and brought to Christmas Island.

After informing the House of this incident, the prime minister foreshadowed that she would, that afternoon, bring on for debate and a final vote the Migration Legislation Amendment (The Bali Process) Bill 2012, which was sponsored by the independent MP, Rob Oakeshott. He introduced the Bill into parliament in February this year in the hope of breaking the political impasse on offshore processing of asylum seekers in the aftermath of the High Court’s decision in the M70 case, which struck down the government’s “Malaysian solution.” Almost from the outset, the Bill had the backing of the government but was opposed by both the Greens and the Coalition.

The prime minister clearly believed that the boat tragedies constituted so great a change of circumstances that she now had some hope of securing the passage of a version of the Bill through parliament. She had reasonable basis for that belief: during the week the independent MP Tony Windsor had been convening meetings of a growing number of parliamentarians from all sides of politics (over fifty on Wednesday morning) who were sincerely trying to find a way of curbing the death toll. It was not beyond the realms of possibility, therefore, that the Bill would get through on the votes of those with troubled consciences who had come to see it as the “least worst” available option, in the words of Labor MP Julie Owens.

As things transpired, the Bali Process Bill, amended to include a twelve-month sunset clause proposed by the independent MP Andrew Wilkie, passed the House on Wednesday with the support of all the independents. But it was unable to garner votes from the Greens or the Coalition and was defeated in the Senate. Contrary to much of the commentary in recent days, that defeat was a good thing for refugee protection in our region.

If it had been passed, the Bali Process Bill would have repealed section 198A of the Migration Act 1958. Under that section, “offshore entry persons” (the legal category into which most unauthorised boat arrivals fall) can be taken to any country that the immigration minister has declared, in writing, to meet three criteria: that it provides asylum seekers with access “to effective procedures for assessing their need for protection” and protects them pending determination of their refugee status; that it provides protection to refugees pending their voluntary repatriation or resettlement; and that it “meets relevant human rights standards in providing that protection.”

Prior to the High Court’s decision in M70, the orthodox interpretation of the provision was that the minister’s declaration doesn’t have to be true as long as the minister believes it to be true. The High Court found to the contrary. Moreover, according to the majority of justices, the countries concerned must, at a minimum, be bound under international law or their own national laws to provide the specified protections to asylum seekers and refugees. Since Malaysia does not meet these minimum requirements, the High Court’s decision invalidated a declaration that the minister had purported to make in respect of Malaysia. The invalidation of the declaration in turn prevented implementation of an arrangement with Malaysia to transfer to that country up to 800 people who arrived in Australia by boat.

The reasoning of the majority judges in M70 also cast into doubt the government’s ability to take asylum seekers to any country in which they would receive less protection than they would in Australia. This means that the Coalition’s preferred option of transferring asylum seekers to Nauru is also legally risky, notwithstanding that Nauru acceded to the Refugee Convention and Protocol on 28 June 2011. Unsurprisingly, therefore, the Coalition is very willing to repeal section 198A as long as a provision is inserted in its place requiring the country to which transfer is made to be a party to the Refugee Convention or Protocol. Amending the Migration Act in this way would rule out transfer of asylum seekers to Malaysia, while allowing a future Coalition government to transfer asylum seekers to Nauru without having to ensure that they actually receive protection there.

The Bali Process Bill, by contrast, would have replaced present section 198A with eight sections numbered 198AA to 198AH. Section 198AD would have required transfer of an “offshore entry person” to an “offshore assessment country” provided a written transfer agreement (whether or not legally binding) was in place. Under section 198AB, the minister would have been able to designate any country as an “offshore assessment country” as long as the country was “a party to the Bali Process” and he or she thought that the designation was “in the national interest.” In determining the national interest the minister would have needed to consider whether or not the country had provided assurances (which did not need to be legally binding) that it would make refugee status determinations in relation to the persons transferred (or permit such determinations to be made) and would refrain from returning refugees to a place where they faced persecution. It would, however, have been within the minister’s power to make a designation even if no such assurances had been provided.

Section 198AC would have required the minister to lay before parliament various supporting evidence – the instrument of designation, the transfer agreement, a national interest statement, a statement about the minister’s consultations with the Office of the United Nations High Commissioner for Refugees, or UNHCR, and the International Organization for Migration, any formal statements received from those agencies, and confirmation that the designated country was “a party to the Regional Cooperation Framework.” But a failure by the minister to comply would not have rendered a designation invalid.

I have no doubt that in putting forward his bill Rob Oakeshott was motivated by a desire to discourage asylum seekers from risking their lives at sea. But if he thinks that a country’s involvement in the Bali Process is a reliable indicator of its willingness to protect refugees then he is wrong. In a previous article I explained the Bali Process and outlined the nonbinding Regional Cooperation Framework, or RCF, which was adopted by Bali Process countries on 30 March 2011. Although the RCF is primarily a framework for border control cooperation, it does contain some protection-related principles and for that reason was a step forward in a region in which few countries are parties to the Refugee Convention or Protocol. The problem with the Malaysian Arrangement – which has been represented as a practical implementation of the RCF – is that it disregards the framework’s principles for protection.

All that deterrence strategies can achieve is to divert asylum seekers into equally irregular, equally risky routes to other countries in which protection may be found or to trap them in places where they receive little or no protection. We are unlikely through such means to spare asylum seekers from unnecessary suffering and premature death. We will simply spare ourselves from having to witness that suffering and death. If we really do have concern for the people who get on overcrowded and unseaworthy boats in an attempt to reach Australia, what we should be doing is investing in improving the protection available to them elsewhere in our region so they have less reason to take such risks.

As I said in a previous article, there is still some prospect of realising the protection potential of the RCF. At the time I wrote that article, the Senior Officials of the Bali Process Ad Hoc Group had decided to establish a Regional Support Office, or RSO, “to facilitate the operationalisation” of the RCF. That decision has since been confirmed by the Bali Process co-chair ministers. The RSO will be located in Bangkok and is expected to start functioning this month under the co-management of Australia and Indonesia. At this stage, it seems to be funded primarily by Australia, which has committed $5.2 million over four years to establish and run the RSO as well as $3.5 million over two years for its initial projects.

Unfortunately, the four initial projects to which the Ad Hoc Group senior officials agreed at their most recent meeting on 1 June 2012 are all focused on border control rather than refugee protection. On a slightly more hopeful note, the senior officials also agreed to the RSO engaging in additional activities, “including the provision of technical training and assistance on protection of victims of trafficking, law enforcement and international cooperation in combating trafficking in persons, and refugee protection and migration management.” The UNHCR is also making persistent efforts to nudge the RSO towards protection-focused projects such as “mapping the protection needs of unaccompanied and separated children who moved irregularly.”

By enabling the Australian government to avoid meeting its protection obligations to most asylum seekers who arrive here by boat, passage of the Bali Process Bill would have greatly reduced the government’s incentive to invest in any future RSO projects designed to increase the availability of protection elsewhere in the region. Doing so would no longer have had a payoff for Australia. The defeat of the Bill is, therefore, the very opposite of a defeat for the protection potential of regional cooperation. •

The sense of islandness 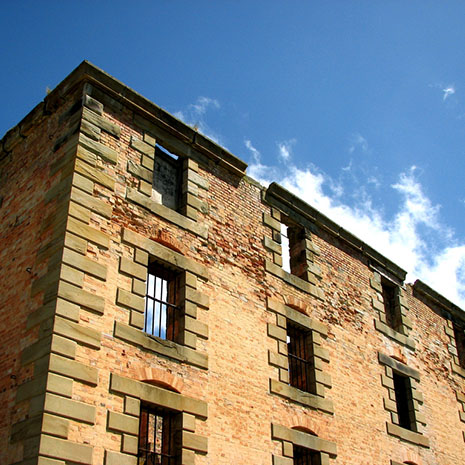