What is this thing I’m doing? 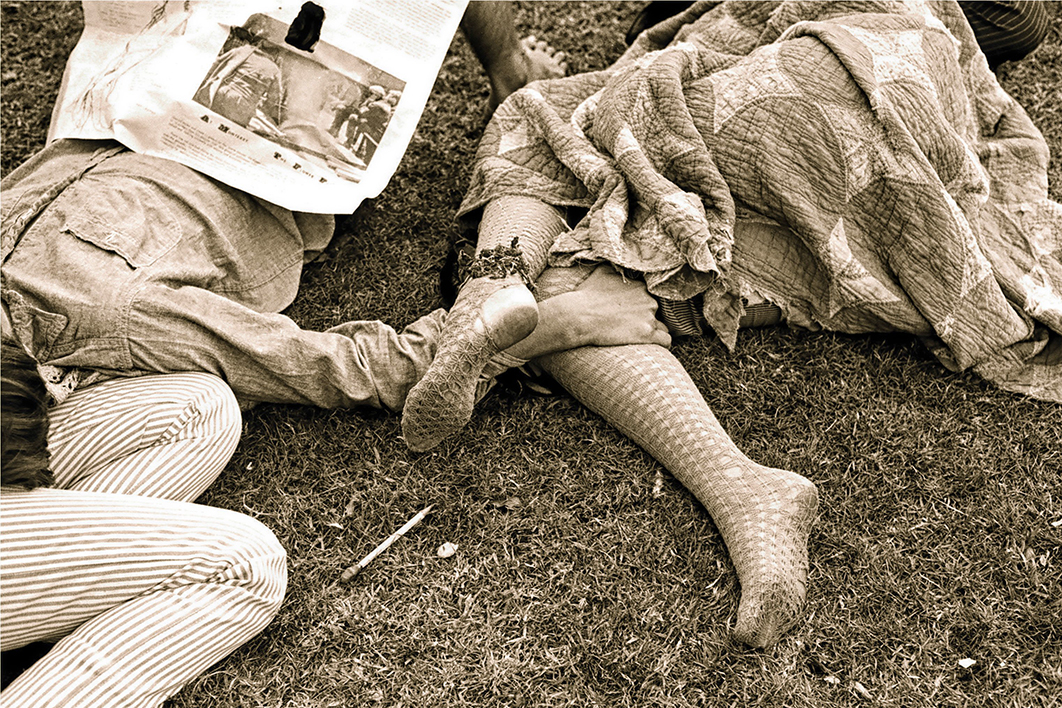 In 1990, Morning Glory Zell-Ravenheart, witch and priestess of the neo-pagan group Church of All Worlds, used the term “polyamorous” in an article titled “A Bouquet of Lovers” to describe the relationships practised at the commune where she lived outside of San Francisco. In 2006, she was given due credit when polyamory entered the Oxford English Dictionary (“the practice of engaging in multiple sexual relationships with the agreement of all the people involved”). At the time of her death in 2014, Zell-Ravenheart was eulogised (and sometimes caricatured) as a poly pioneer, including in tabloids like the Daily Mail that fixated on her polyamorous marriage with her long-time husband and “wizard” Oberon and their lover Diane.

In a bumbling fashion, polyamory has since entered the mainstream — sort of. Television series such as the British comedy-drama Trigonometry and the North American sitcom You Me Her have updated earlier stereotypes about poly hippies by focusing on hot young triads, while on dating sites the pursuit of “ethical non-monogamy” (of which polyamory is one form) is closing in on “long-term relationships” and “friends with benefits.” The fight for legal recognition for polyamorous relationships is building wherever there’s a vanguard to lead it.

Despite (or perhaps because of) this increased visibility, however, polyamory still attracts a pronounced degree of suspicion, mockery and contempt, as two new and very different books show. Neither is dedicated to polyamory exclusively; they’re not guidebooks, for which there is a growing market, nor written from the perspective of professional expertise, like Jessica Fern’s recently published Polysecure: Attachment, Trauma and Consensual Nonmonogamy (2020). What makes them especially valuable is how they think with and through polyamory, at a time when the phenomenon is overdue for wide-ranging contemplation.

Sad Love: Romance and the Search for Meaning by Canadian philosopher and writer Carrie Jenkins is a compact work of pop philosophy, broadly adjacent to Alain de Botton’s oeuvre in aspiration (bringing philosophy to the masses) though not in tone (Jenkins is more earnest). People Who Lunch: Essays on Work, Leisure and Loose Living is a sharply observed collection in which Melbourne-based writer Sally Olds boldly sets her own work apart from at-a-glance similar books by millennial women essayists like US-based writers Jia Tolentino and Durga Chew-Bose, and not only because she’s Australian. In “The Beautiful Piece,” for instance, Olds cleverly deconstructs the contemporary “irreproachable” essay with its in-built defences, then deftly sidesteps falling into her own trap by panning out to provide a material analysis of the whole content-click-bait industry. What the two books share is that both authors have personal experience with polyamory — Jenkins is dedicated to it, while Olds recounts her fledgling efforts with bittersweet ambivalence — which they each harness to their larger concerns.

In Sad Love Jenkins ambitiously proposes a “new philosophy of love,” building on her 2017 book What Love Is: And What It Could Be and its challenge to the widespread notions that monogamy is the paradigmatic and superior expression of romantic love. In both books Jenkins presents her own experience of polyamorous relationships as the starting point for philosophical inquiry. What Love Is began with confused reactions to the fact Jenkins had both a husband and a boyfriend, prompting her opening philosophical question: “What is this thing that I’m doing? Is it love? Is it romantic love?” With cautious optimism she concluded that romantic love could accommodate non-monogamous love, and the more positive representation and discussion of polyamory the better.

Sad Love finds Jenkins in a more sombre mood. In sharing details of her own relationships in publicity for What Is Love, Jenkins, a self-described introvert, found herself uncomfortably in the spotlight as the polyamorous professor. Photographed with both her husband and then partner for a feature in the Chronicle of Higher Education (hardly the Daily Mail), Jenkins was trolled and shamed whenever her story was recycled for the media. In contemplating the “stream of nasty feedback,” Jenkins writes: “I am a woman who talks publicly about being polyamorous, so I have been called all of the derogatory words you can think of for a promiscuous woman.”

The pandemic and the election of Donald Trump compounded her despair, but rather than retreat into silence, Jenkins continues to theorise love in Sad Love, this time by pricking the “beautiful happy fantasy” of romantic love. Against the innately conservative “emotional dream” that only love can make us happy, Jenkins proposes her capacious theory of “eudaimonic love” that “has room for the full gamut of human experiences and emotions, positive and negative, happy and sad.”

Reclaiming Aristotle’s eudaimonia from English translations that conflate it with “happiness,” Jenkins develops her overarching theory first by indicting the enabling forces of the ideology of romance. These include the American ideal of the pursuit of happiness, along with capitalism and popular culture, to name the obvious ones. In true pop philosophy style, she draws on an eclectic range of thinkers and approaches, from canonical philosophers through to the “economist of love,” Marina Adshade, which makes for equal parts compelling and frustrating reading. Promising lines of argument, like her suggestion that society has only just begun to “scratch the surface” of the feminist slogan “the personal is political,” are mostly left dangling rather than properly pursued. bell hooks, arguably the key feminist theorist of love, is namechecked but only superficially engaged with.

Jenkins is both unapologetic and hesitant about philosophising from life experience. Late in the book she shares the “disheartening” story of presenting her research to a small group who predictably and intrusively wanted to discuss her personal life during question time and make moral judgements about polyamory. In bracketing Sad Love with generative claims for polyamory as a gateway to theorising love, and with examples of resistance and backlash, Jenkins captures a cultural moment but doesn’t quite escape it. Her book’s most powerful points come when she is most open about the toll of being an otherwise “respectable” public figure associated with polyamory. Elsewhere, there’s a sense that she is holding back from further examination of why non-monogamy remains so threatening.

In one of the two essays in People Who Lunch that focus on polyamory (out of a total of six), Sally Olds identifies “four main negative responses” to it “from monogamous-leaning people”: ridicule and hilarity, objective interest, suspicion and hostility, and absolute outrage. Jenkins has first-hand knowledge of each, but it is Olds who really takes polyamory as a theme and runs with it. Eschewing any claims for universalism — which theorising a philosophy of love surely is — Olds writes from a refreshingly explicit left-wing and queer perspective, rooted in her vibrant social milieu of fellow precariously employed young creatives, and in deep and wide reading.

Where Jenkins appears convinced of the inherent radicalism of non-monogamy, including as an antidote to the alienation of capitalism, Olds is not so sure. In “A Manifesto for Post-Work Polyamory” she raises the stakes of both projects by astutely identifying shortcomings on each front. In defensive mode against haters on all sides, “polyamory often tries to banalify itself” (Jenkins is somewhat of a case in point), and “must not legitimise itself at the expense of a radical politics.”

In the meantime, post-work politics — “a cluster of tactics for ending humankind’s dependence on waged labour for survival” — “must not radicalise itself by re-domesticating relationships.” Olds knows where and how radical politics have failed in the past. She’s also alert to the complacencies and dead-ends of the present, evident in the “gentrification” of polyamory, and the mangled use of the concept “emotional labour” at the expense of class-based solidarity. The manifesto is an audacious genre, and Olds confidently updates and reinvigorates it.

Olds packs more thought-provoking analysis into the next essay, “For Discussion and Resolution,” than is found in most book-length treatments of the subject. For readers with only a passing knowledge of polyamory, she skilfully joins the dots between enduringly stereotypical “geek” polyamorists like Morning Glory Zell-Ravenheart, various experiments in living and loving (including an “Eveless Eden” all-male commune in Queensland in the 1890s) and key texts of polyamory’s more recent bourgeois bohemian turn (most notably, The Ethical Slut by Dossie Easton and Janet Hardy, published in 1997 and never out of print since).

That her survey also includes Native American scholar and “critical polyamorist” Kim TallBear and alternatives to both polyamory and monogamy, such as “dyke ethics,” further sets it a cut above other think pieces on the subject.

Another through line is Olds’s own increasing exposure to “poly people,” which began during her undergraduate days in Queensland, then morphed into first-hand experience when she and her then boyfriend J decided to try “hierarchical poly” and remain each other’s primary partners. Against the plethora of evangelical and doom-and-gloom first-hand accounts in circulation, Olds offers an insider view that throws up larger questions. “I am newly terrified,” she recounts in the present tense, “by the threat of sexual stagnation.” Polyamory, she continues, “makes obvious the sexual entitlement generally unremarked in monogamous sexual relationships.”

In contrast to Jenkins, who maintains a utopian view of non-monogamy, Olds does not let monogamy or polyamory off the hook. Each is presented as equally bound up in the logics of capitalism, individualism, sexism, settler colonialism and self-and-collective delusion. Polyamory, suggests Olds, has or can have more radical potential, but if it keeps going as it has it will be revealed as a “stop-gap solution,” extending privilege rather than dismantling it. By blending her personal experience of polyamory with its broader history, Olds ponders to riveting effect the tensions between polyamory’s utopian history and claims and its contemporary manifestations. •