What should the Greens do with Gonski 2.0?

With Labor implacably opposed, the Greens must play a positive role in the Senate 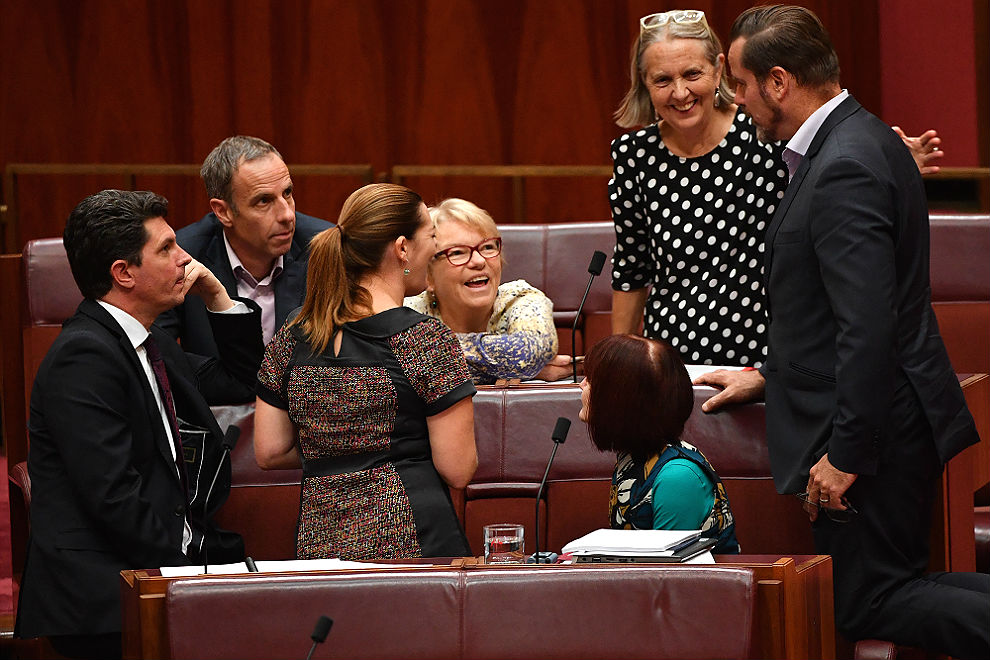 When Sarah Hanson-Young confirmed on Friday that the Greens were willing to negotiate with the federal government to pass a new school-funding package, the reaction was rapid and stinging. Shadow education minister Tanya Plibersek declared that “whatever way you look at it, this is a $22 billion cut to schools, and I would be shocked if the Greens supported it. Teachers and parents will never forgive the Greens for selling out public school kids.” The I Give a Gonski campaign was no less critical: “We never thought we would see the day this would happen.” The Greens’ position was “unbelievable,” declared ACTU secretary Sally McManus. Even Senator Hanson-Young’s Greens colleague Lee Rhiannon joined in, enthusiastically retweeting criticisms directed at her own party.

By Saturday, Hanson-Young had issued a clarifying statement. The Greens had not yet made a decision on Gonski 2.0, they reiterated their call for a Senate inquiry, and they would reserve their decision until after they have considered the evidence presented to the inquiry.

Are the critics right when they say that the Greens shouldn’t entertain the possibility of doing a deal with the government? No, I don’t think they are. Are there flaws in the latest version of Gonski that could jeopardise the principle of needs-based funding it purportedly advances? Yes, there are.

The first problem is that the journey towards the needs-based funding benchmark set out by Turnbull and his education minister, Simon Birmingham, is excruciatingly slow. As the Australian Education Union’s Victorian president, Meredith Peace, pointed out, “a student in Year 4 today will have left school by the time this funding is delivered.” Instead of the nearly $4 billion of additional funding that was originally scheduled to arrive in years five and six of the Gonski agreements (2018 and 2019), the Turnbull government has committed to $2 billion over four years. Most of the funding growth is delayed until beyond the forward estimates.

The government’s obvious response is that funding will grow: in real terms, and faster than it promised at the last election. That’s true. But it’s also true that the Turnbull government has signed up to be judged by a different standard. In accepting the fundamental findings of the Gonski Review, it accepted that funding should be provided according to student need – and on that criterion many young Australians don’t receive an appropriate level of educational resourcing. The onus on a government that accepts this reality is to act with all speed to change it.

It’s also the case that we’ve been here before. The year 4 student of today wasn’t even in preschool when David Gonski presented his report to the Gillard government in November 2011. Now we’ve reached the point when the big bucks were supposed to arrive, and they’ve been deferred again. If recent events have confirmed that a week is a long time in the politics of school funding, circumspection about ten-year timelines is in order. Things change, including governments. And, as the preschool parents of 2012 have discovered to their chagrin, commitments beyond the forward estimates are particularly susceptible to revision.

What the Greens’ critics don’t seem to have noticed, though, is that the minor party has clearly recognised the imperative of locking in needs-based funding increases as quickly as possible. In the same comments in which she indicated a willingness to negotiate with the government, Senator Hanson-Young signalled that getting more money, sooner, to disadvantaged students would be a priority.

The next problem with Gonski 2.0 is probably more profound, and definitely more complicated. And it compounds the first one. If you're a disadvantaged young Australian, you generally (though not always) attend a public school. The federal government is committing to provide just 20 per cent of the funding entitlement for public school students (and 80 per cent for non-government school students). For the overwhelming majority of disadvantaged Australian school children, what the Commonwealth does is important, but not nearly as important as what state and territory governments do.

To deliver needs-based funding, governments must work in concert. Julia Gillard recognised this. She didn't just deliver more Commonwealth dollars to the kids facing the highest hurdles; she used the injection of Commonwealth funds to elicit funding increases from the states and territories. This most obviously worked in New South Wales, in large part due to the outstanding Nationals education minister, Adrian Piccoli. It manifestly failed in in the Northern Territory, Western Australia and Queensland, where Christopher Pyne, in a manner both juvenile and delinquent, succeeded in persuading his conservative counterparts not to cooperate. But Gonski 1 included a plausible story about how governments would work together to deliver needs-based funding.

Turnbull’s version of Gonski has jettisoned both the agreements and the concept of an agreed approach. Under Gonski 2.0, the Commonwealth will do what it thinks is its bit, the only proviso being that states and territories maintain current funding levels in real terms. There is no reciprocal obligation that other jurisdictions deliver the requisite increases to ensure students receive their needs-based resource allocation. And there is no guarantee that states and territories will fund 80 per cent of the Schooling Resource Standard for public school students (or 20 per cent of total government funding for students at non-government schools).

States and territories, remember, have not signed up for this division of labour. So the journey to needs-based school funding will not only take ten years; it will also be at the mercy of all the jurisdictional and partisan rivalry and rancour that will inevitably unfold over that period.

While the Greens may be hard-pressed to address this problem directly from the Senate crossbench, they can push for the National Schools Resourcing Body recommended in the original Gonski Review (and advocated for more recently by Gonski panellist Ken Boston). The purpose of the body would be to provide robust, independent, expert advice on the precise amounts of funding that students need. A needs-based funding model places a lot of weight on defining and measuring need accurately. It’s crucial that the task is tackled with appropriate expertise and independence.

Following through on that recommendation could also help pressure governments to cough up, reduce blame and cost-shifting between jurisdictions, and ensure funding is targeted towards addressing disadvantage. Such a body could ameliorate, if not solve, Gonski 2.0’s lack of a unified federal–state approach.

So Hanson-Young and the Greens are right to submit Gonski 2.0 to a Senate committee for review, to pursue significant amendments and to reserve their decision to vote for it. They should seek more money sooner, greater guarantees of getting the requisite buy-in from the states, and an independent body that drives understanding of the resourcing that students need to succeed.

But what if they have only limited or partial success? Should the Greens really, as Bill Shorten insists, “Just. Say. No.” to Gonski 2.0? To some extent it depends on what exactly the Greens can win — and they may have considerable leverage. The school funding legislation is at the heart of the Turnbull government’s shift to the centre, and of the prime minister’s hope of reminding voters why they once thought he’d do a better job than Tony Abbott. The vehemence of Labor’s opposition strongly suggests that they sense this. And because Labor has rejected Turnbull’s Gonski plan out of hand, the Coalition will very probably need the Greens.

In the final assessment, however, the ambition of Gonski 2.0, flaws and all, matters. The conservative embrace of needs-based funding shifts the ground on which debate about schools funding takes place decidedly to the left. It offers the opportunity to elevate needs-based funding to the level of Medicare, where any deviation from the national consensus is quickly corrected and ends up costing the Coalition. If Labor won’t seize the opportunity, the Greens should. •

Tom Greenwell is a Canberra-based teacher and writer.