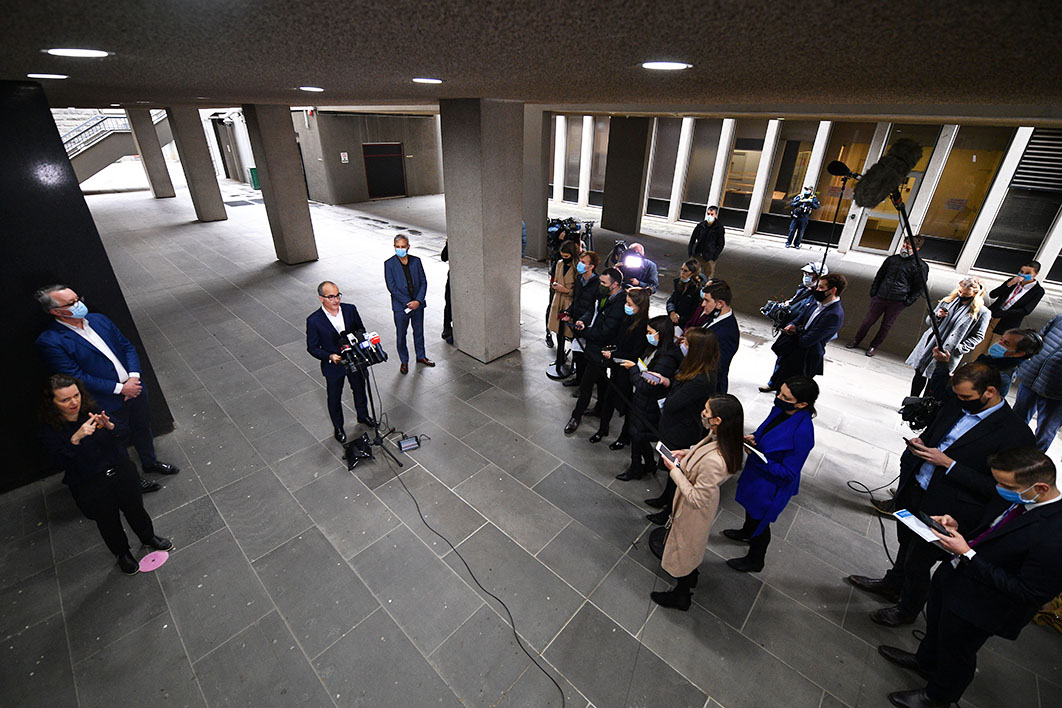 Depriving citizens of their liberty is an extreme exercise of government power. So it’s hardly surprising that the Victorian media dusted off the professional bravado it reserves for holding governments to account when the state entered lockdown again late last week.

The public doesn’t always like journalists behaving this way, and I can understand why. Too often over the past year, the self-conscious, self-righteous performance of journalism has trumped public service.

As the eminent American journalists Bill Kovach and Tom Rosenstiel write in their classic book, The Elements of Journalism, monitoring power is one of the fundamental roles of journalism. But “the watchdog principle is being threatened,” they warn, “by overuse and a faux watchdogism.” This kind of watchdoggery is more about entertainment and journalists’ egos than gaining useful information.

So what does “holding to account” mean? Let’s start with what it isn’t.

It isn’t a licence to be ignorant or poorly briefed, or to attempt to compensate with extra aggression. Indeed, it shouldn’t mean aggression for aggression’s sake.

Nor should it mean going for the gotcha story and ignoring, or not bothering to heed, the context. Most importantly, a reporter who fails to correct errors, of both fact and judgement, is part of the problem and should get out of the way.

During Victoria’s first lockdown the “daily Dan” — Victorian premier Dan Andrews’s marathon of media conferences — became essential viewing. Andrews made a point of continuing each conference until journalists had no more questions. Some of these media conferences went for two hours or more, and they were often hostile.

News Corp’s Herald Sun, in particular, was critical of the premier, tagging him “Dictator Dan” and critiquing both his management style and the government’s restrictions. Almost none of its commentary focused on the issues for which Andrews might properly be held to account — the systemic problems of public health resourcing and public service decision-making that were already clear and have been highlighted by subsequent inquiries.

Remarkably, the premier maintained a high level of support regardless. A poll taken in November 2020, at the end of the state’s longest lockdown, found that 71 per cent of Victorians approved of the way he was doing his job.

So: the impact of all that posturing journalism? Very small.

In fact, the journalists were props and prompts; Andrews spoke over their heads directly to the audience. I can’t remember a single question that placed him under serious pressure or a single occasion on which he said something he hadn’t planned to say. It was a display of political leadership unlikely ever to be analysed seriously by the media, given that doing so would reveal the impotence of performative watchdoggery.

So how would we rate the overall performance of the media over the course of the pandemic? I would say “mixed.”

Some of it has been excellent. Media reporting is largely to be thanked for exposing the problems with hotel quarantine, for instance — although mistakes were certainly made. The detailed reporting on the vaccine rollout and the nature of vaccinations has been a high point, as has the coverage of how the crisis is affecting individuals and institutions.

Talkback radio hosts, on both the ABC and commercial radio, have performed well, channelling questions from the public to those in power, and seeking and reporting useful information. Media pressure is probably also to be thanked for the fact that we now have more transparent data on outbreaks and responses.

But there have been huge missteps too.

No evidence has ever been found that security guards had sex with quarantine detainees, despite a claim by the Herald Sun that was repeated by journalists who should know better. The hotel quarantine inquiry made clear that it didn’t happen, but no media outlet has published a correction.

Too much reporting has been not so much inaccurate as distorted or devoid of context. Last month, for instance, many outlets reported that the Victorian government had wrongly blamed a man’s use of a nebuliser in hotel quarantine for the short lockdown in February. At least, that was supposedly the finding of what the Herald Sun described as a “bombshell” report.

But the confidential report said nothing of the kind. Rather, it found that a swabbing procedure involving an infected guest allowed the virus to leak into the corridor, where it travelled and infected the man with the nebuliser. His use of the nebuliser was indeed the main reason the virus then escaped from the hotel. Only readers who went well past the gotcha headlines would have found that context.

Then there was the time that chief health officer Brett Sutton was accused of trying to cover up evidence by “instructing” departmental solicitors not to reveal it to the hotel quarantine inquiry. That was comprehensively wrong — a misinterpretation of an admittedly ambiguously worded document. The idea that Sutton had covered something up was knocked on the head in the inquiry’s final report. Yet you had to dig deep to find corrections of the original, deeply damaging, front-page reports. Many outlets have never corrected those reports.

More recently, the Age took Sutton out of context to make it appear he had criticised the Victorian government’s response — though to its credit the paper corrected the report.

And we are still seeing senior reporters suggesting that somebody is covering up information about who made the decision to hire private security guards for hotel quarantine — even though the inquiry forensically established that no single person made the decision. Some of that reporting makes me think journalists haven’t bothered to read the report. Just because no guilty party has been blamed, they behave as if we know less than we do.

I have been speaking mainly about Victorian reporters, but journalists in Canberra and Sydney have also relayed falsehoods, some of them reflecting a simple misunderstanding of the southern city.

Most annoying to Melburnians is the lazy assumption — or perhaps acceptance of federal government behind-the-scenes briefings — that the current outbreak can be equated with the pre-Christmas breakout in New South Wales, and that therefore Victoria is wrongly locked down. Two things were different: the virus variant and the epidemiology.

Nor should we assume that the NSW approach was without risks. Reporters would be writing quite differently if that wave had got away, which most experts concede was possible.

So here we are again, with what social media has tagged the “daily non-Dan.” This time, while Andrews recovers from his back injury, acting premier James Merlino is presiding over the answer-all-questions encounters.

I am reluctant to criticise journalists for asking questions — even stupid ones. Sometimes you fly a kite, bark up the wrong tree or even make a simple mistake. That is all part of the process, as any journalist knows. A good reporter returns to the keyboard, winnows out the chaff and exercises judgement before filing a report.

But the unique experience of lockdown, with thousands watching in real time, means that for many members of the public the media conferences are the journalism. Many more are watching than will read or view the journalists’ reports. And they are largely disgusted by what they see.

They don’t necessarily understand the pressures the journalists are under, or the absurdities imposed by the tired tropes and media formats that newspapers and broadcasters haven’t shaken off. Sometimes a question will be asked many times to get the subject to answer succinctly enough for the six o’clock news. Sometimes reporters are getting text messages from the boss instructing them to press a certain line — and the boss is watching live, so there is no way to wriggle out. And we can all be wrong. We can all ask those stupid questions.

Even allowing for all this, some episodes in recent days have made me gasp.

Sutton arced up on Thursday when a journalist opened by asking him why the state was “getting contact tracing so wrong.” This, Sutton said, was “an absurd proposition” — and he was right. Certainly, contact tracing had its problems last year, and Sutton earned some displeasure from his political masters by being frank about that. This year, though, all the relevant experts have said that Victoria’s contact tracing is as good as it can be, and the effort to detect and trace so many contacts has been extraordinary.

So it was a stupid question. But instead of being eliminated from the reporting, it became central. It was reported that Sutton had engaged in a “rant” — that he had “been forced” to defend the contact tracers. A much better line of questioning, addressed to the minister or the acting premier, would have focused on Victoria’s long-term lack of investment in public health.

Or they might have asked whether the state had done anything to prevent another draconian lockdown of public housing, should infections emerge there. Or how it’s progressing with the implementation of the ombudsman’s recommendations in the wake of last year’s hard lockdown of tenants.

And just yesterday, questions were predicated on the incorrect idea that other states have a higher level of compliance with QR code check-ins. Time was spent on questions that seemed to misunderstand the different responsibilities and powers of state and federal government.

Have journalists forgotten that we ask questions in the hope of getting useful answers? That this is the main part of the job, and the main meaning of “holding to account”?

I am not arguing for reporters to go soft on the state government. But when citizens are being locked up, journalists owe it to their audiences to read the documents, understand the context, listen to the answers and think about them, and report on the structural issues — not to simply, or chiefly, focus on the “gotcha” moments. To report in a way that reflects reality rather than a fantasy world in which awful problems can be traced back to the actions of baddies.

My criticism here is predicated on a simple though perhaps naive idea. I think journalism matters. And it particularly matters at times like these. •