When the British spied on Billy Hughes at Versailles

… and how they shared what they learned with the Americans 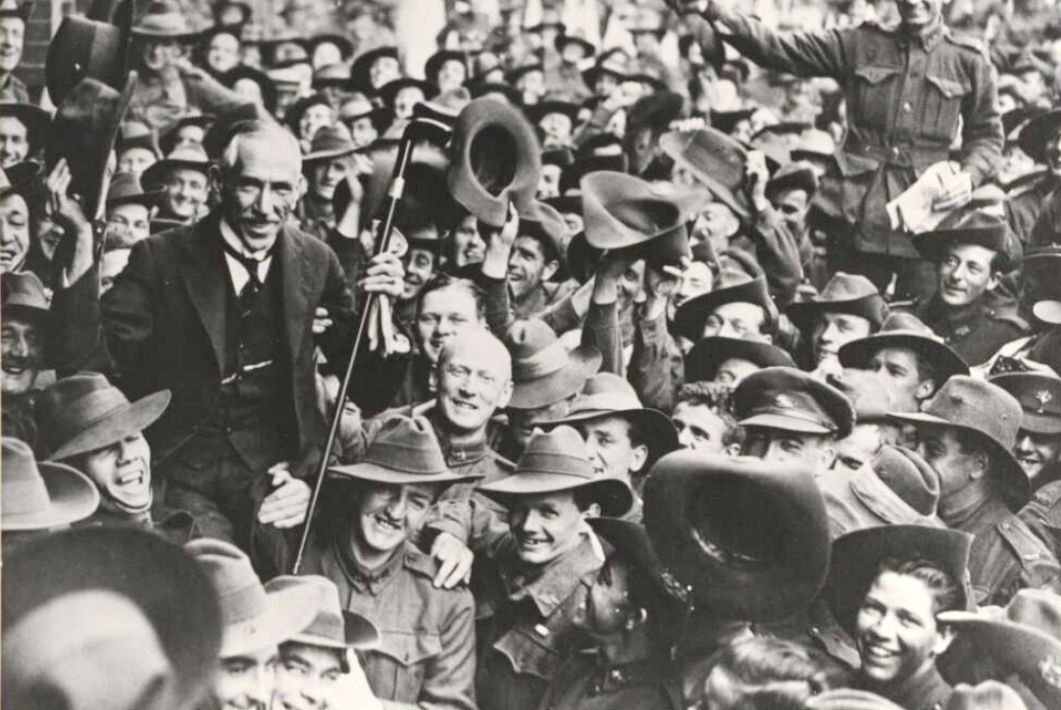 That irascible “fiery particle,” wartime prime minister Billy Hughes, famously stood up to US president Woodrow Wilson during the Versailles Peace Conference in 1919. He asserted Australia’s claim to German New Guinea, demanded a share of war reparations, and refused to give ground in relation to the notorious White Australia Policy.

Australia’s natural supporter, British prime minister David Lloyd George, brokered rough compromises on the first two issues, and successfully backed Australia against strong Japanese and other international opposition on the last. Evidence newly uncovered in the British archives sheds important light on how this was achieved.

Six months before Versailles, when the war was entering its final stages, Hughes was in Britain making red-blooded and widely popular speeches about the need to make Germany pay the whole cost of the war. Lloyd George, anticipating an election at war’s end, paid lip-service to this rabble-rousing, but he also knew that the German economy needed to be preserved for the sake of world trade. And Woodrow Wilson’s Fourteen Points, the broad blueprint for the peace treaty, spelled out that there would be no punitive financial settlements against Germany and no colonial acquisitions.

Watching from afar, the new sources reveal, Wilson was horrified at Hughes’s extreme, eye-for-an-eye, tub-thumping nationalism. The president asked Robert Lansing, his secretary of state, to contact the British government to let it be known that if Hughes, who was due to pass through on his way home, made such speeches in America, Wilson would denounce him. Wilson even threatened to deny Hughes a visa.

Aware of their immense war debt to the Americans, the British supported Wilson. Lord Reading, the British ambassador in Washington, arranged for a quiet word of warning to Hughes. As it turned out, the war ended sooner than expected and Hughes stayed in Europe. Round one with Wilson was a draw, but the British had privately revealed a pro-American bias and opened a fissure in the unity of their empire.

In the northern mid winter, with the treaty negotiations in full swing, Hughes returned to the charge. During the British Empire delegation’s confidential deliberations, Hughes, together with the South Africans and New Zealanders, held out for annexing German New Guinea (Australia), South West Africa (South Africa), Samoa (New Zealand) and Nauru (joint British Empire). Hughes also wanted the German islands north of the equator, which were claimed and occupied by Japan. In the interests of immigration control, he opposed the racial equality clause proposed by the Japanese for the draft League of Nations Covenant. And he agitated still for full reparations from Germany.

Declassified British intelligence documents now show that, true to his trade union–bargaining background, Hughes tried to do a clandestine deal with the Japanese. To Lloyd George, he said he would go to the wall over his diplomatic battle for the German islands north of the equator, over reparations, and over racial equality. Australia might not even sign the peace treaty. But he told the Japanese a different story.

In secret talks, Hughes rowed back on his ambit claim. He said he would “raise no objection to Japan becoming a Mandatory for the islands North of the Equator” and would “cooperate” with the British to achieve that end. On racial equality he told them he “personally” had no objection but the question was “serious and difficult” domestically in Australia, where “public opinion” had to be “taken into consideration.” In short, he was suggesting tit for tat: keep the islands in return for not pressing on the immigration issue. Hughes did not know that the British had an “informant” in the Japanese delegation who immediately reported Hughes’s negotiating position.

Doubtless the Japanese were gratified. They were also keen to have British Empire support for their shakier claims to the old German concession in Shandong, northern China, so that too went into the mix. When the racial equality clause came up for discussion in the conference, Wilson unexpectedly kicked the clause into indefinite limbo by chair’s action, despite a strong majority in favour. He was concerned about his own “white America” zealots on the west coast, where Hughes threatened to stoke up the populist media in upcoming elections. As a result, the racial equality issue would lay fallow for another generation.

To compensate, Japan got Shandong and the north Pacific islands. Australia got New Guinea. New Zealand got Samoa. Reparations were fudged at Versailles for future determination. But in the meantime there was a reasonable return. In the small print of the treaty, Hughes secured a two-fifths share of Nauru’s phosphate deposits, worth £168 million to Australia at 1919 prices over the next half century, or just over half Australia’s war costs. All nations present, except China, signed the Versailles treaty. The Great Powers had managed Billy, or had he managed them? ⦁

Carl Bridge teaches at King’s College London and is the author of William Hughes (Haus) and co-editor of the forthcoming Australia in War and Peace, 1914–19 (Department of Foreign Affairs and Trade).