Where does One Nation get its support? 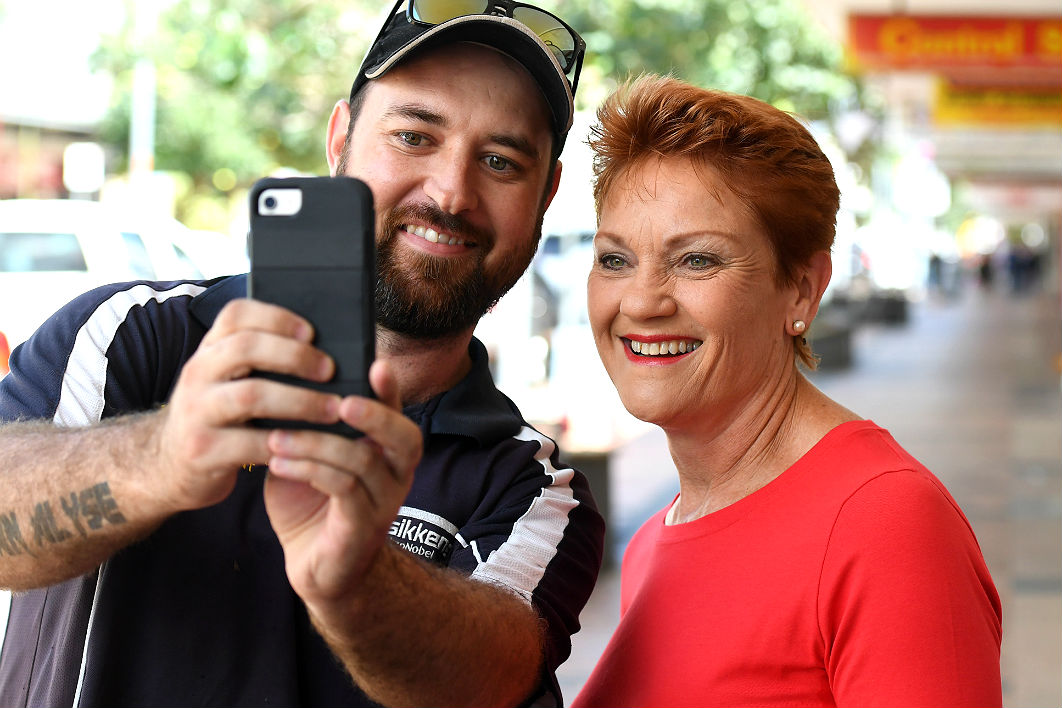 Snapshot: One Nation leader Pauline Hanson poses with a supporter in Geraldton, Western Australia, on 9 March this year, during campaigning for the state election. Dan Peled/AAP Image

Over the past ten Newspolls, One Nation has averaged 10 per cent of the vote. That’s the same as the Greens, and far above the 4.3 per cent it won in last year’s Senate election, let alone the 1.4 per cent it recorded in the House. Its vote has risen as the Coalition’s has fallen ­— which is one reason why the Turnbull government has now lost sixteen Newspolls in a row.

But what has driven these voters to desert the Coalition (and, to a lesser extent, Labor)? Racism pure and simple, asserts David Marr in his recent Quarterly Essay, The White Queen: One Nation and the Politics of Race.

For that conclusion, he relies almost entirely on the latest Australian Election Study, the universities’ long-running post-election survey, directed by Ian McAllister of the Australian National University. Based on its findings, Marr insists that One Nation voters are not those doing it hard economically — “they are in work and middling prosperous.” Rather, what drives them to Pauline Hanson is their hostility to migrants. “One Nation is an anti-immigration party.”

To the extent that it relies on the Australian Election Study, David Marr’s analysis is invalid.

I have great respect for David Marr as a journalist, but statistical analysis is not his forte. If it were, he would not have put so much weight on a source once valuable, but now, regrettably, an eccentric, unreliable outlier in the surveysphere.

Last year’s AES survey was sent out to 12,497 people, by mail or email, of whom just 2818 replied: that’s a response rate of 22.5 per cent. Open up the survey, and you’ll see why. It has ninety-nine questions, many of them multiple, requiring up to 263 responses. It asks you how much confidence you have in fourteen separate institutions. It asks you if you think Malaysia is likely to invade Australia. It wants to know which political party your mother supported, whether any of your friends or neighbours lobbied you during the election, how you judge Malcolm Turnbull and Bill Shorten on nine separate qualities, how you rate the parties on ten separate issues… and so on, interminably. It would take the average person several hours to complete the survey.

That’s why only 22.5 per cent of respondents replied in any form, and many questions got less than a 20 per cent response. Those who replied were disproportionately retired people who had been managers or self-employed, and who voted for the Coalition. (For the Senate, 46.1 per cent in this survey voted Coalition, compared with 35.2 per cent of the electorate.) By the end, most also regretted having wasted so much time on the survey, and only 46 per cent said they would be prepared to do it again next time.

Apart from their views, the most striking fact about these One Nation voters is that they were overwhelmingly Australian-born and working-class (far more so than Labor voters). Marr tells us they were “oddly gloomy about their (economic) prospects” but doesn’t ask whether that might be because their economic prospects were indeed gloomy. He does note that “focus groups say many One Nation voters are working part-time when they would like to be full-time” — but the AES survey doesn’t ask about underemployment, and some of its questions don’t distinguish between past and present employment.

The biggest problem, however, is that a sample of seventy-two people from a group disproportionately made up of older and better-off people can’t provide reliable information about One Nation’s supporters. To the extent that it relies on this survey, David Marr’s analysis is invalid.

The truth is that we don’t know how much Pauline Hanson’s support is driven by economic factors, and how much purely by racism. If her supporters are overwhelmingly working-class, and disproportionately underemployed, or unemployed, or struggling small-business owners, economic factors could well be playing a crucial role. •