Where now for the Greens?

The Greens face some of the challenges that effectively killed the Democrats, write Narelle Miragliotta and Robert Simms. But important differences between the parties mean that history is unlikely to repeat itself 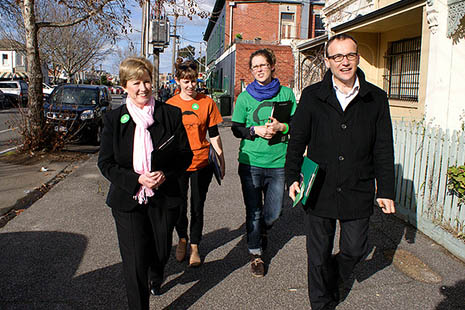 THE 2013 election outcome could only be described as mixed for the Australian Greens. The party achieved something rare among minor parties – having not only won a lower house seat at the previous election, it also successfully defended it this time around. But the jubilation of Adam Bandt’s victory in the seat of Melbourne was offset by the realisation that the party’s nationwide share of the primary vote had declined significantly. In the House of the Representatives, the Greens hemorrhaged more than a quarter of their 2010 vote; in the Senate, around a third of voters opted to move their vote elsewhere.

The outcome sparked the usual speculation about the Greens’ longevity, and grist was added to the mill when six of Christine Milne’s senior members of staff quit within weeks of the election. Importantly, the result raised the question of whether the Greens might go the same way as the now (almost) defunct Australian Democrats.

The Greens and the Democrats have certain characteristics in common. Both parties embrace progressive political values, both emphasise participatory forms of internal party democracy, and both have occupied important roles in the balance of power in the Senate. But this is where the similarities end.

The differences largely reflect the different origins of the two organisations. The Democrats were the product of an amalgamation of minor parties that coalesced around Don Chipp, a former minister in Malcolm Fraser’s Coalition government. Their support was underpinned principally by disenchanted major party voters. The Greens had their genesis in the environmental and social justice movements that emerged in the 1970s and 1980s. These roots provided the party with an organic, if slightly temperamental, constituency on which it could build a voter base (and a strong party organisation outside parliament).

The two parties also positioned their political brands very differently. The Democrats were very consciously a moderate, centrist party that sought to act as an honest broker between Labor and the Liberal Party. Its main objective, in the words of Don Chipp, was to “keep the bastards honest,” and to facilitate compromise on legislation when the main parties refused to cooperate. The Greens had the more ambitious aim of becoming an alternative party of government – a mission perhaps best articulated by Bob Brown when he proclaimed, “We don’t just want to keep the bastards honest, we want to kick the bastards out.” Through this positioning, the Greens presented voters with a more compelling reason to vote for them.

But there is another important area in which the parties are very different, and that is the durability of their voter base. The Democrats’ primary vote was always unstable, prone to significant voter turnover from one election to the next. At its electoral debut in 1977, the party secured 9.4 per cent of the vote in the House of Representatives, only to see the figure slump to 6.6 just three years later. In 1990 it won 11.3 per cent of the vote but support fell precipitately to just 3.8 per cent in 1993. At the core of these fluctuations was the fact that the Democrats never truly developed an identifiable base of support. Its support was always dependent on two uncertain factors: the charisma of its leader and the electoral (mis)fortunes of one or both of the main parties.

Where the Democrats had exploded onto the political stage in 1977, the Greens’ debut was much more restrained. Before this most recent election, the party consistently increased its primary vote, slowly building its share at nearly every election since the early 1990s. This modest but upward trajectory suggests that the party has been quietly consolidating its voter support – an assumption supported by the findings of the Australian Election Study, which has found a steady rise, from 1.2 per cent in 1996 to 6 per cent in 2010, in the number of voters who profess allegiance to the Greens. Both sets of evidence suggest that the Greens are acquiring a core of supporters who will routinely vote for the party.

The chief benefit of this acquisition of partisans is that the Greens are less dependent on charismatic leadership for their vote. More particularly, it means that the party is much more capable of withstanding the kind of vote-shedding that occurred at the 2013 polls, when protest voters shifted to one of the many other small parties on offer.

THIS is not to say that there aren’t serious challenges ahead for the Greens. How they choose to respond will determine whether their nascent partisan support base sticks and grows.

One of the biggest of these challenges is to come up with a strategy to expand the party’s base of support. The good news for the party is that it has a fairly contained and distinctive voter base. Its supporters are largely affluent, well-educated, white-collar professionals concentrated in inner metropolitan seats, and it also draws significant support from among younger voters. Moreover, the party does have potential to make further inroads among segments of Labor’s voter base, particularly those Labor voters who identify as being fairly left-wing (or more left-wing than other Labor voters).

But now for the bad news. According to a study by political scientist David Charnock, the Greens are widely perceived by voters as being the most left-wing of extant mainstream parties. This, Charnock argues, limits the party’s appeal for centre-right voters, and with it the opportunity to build affinities with different segments of the electorate.

The dilemma for the Greens is whether to persist in the search for new constituencies or to concentrate on consolidating the emergent partisan base in inner metropolitan electorates. Either option is fraught. The early history of the Greens in Tasmania certainly demonstrates that the party has the capacity to draw support from conservative rural constituencies traditionally at odds with its social agenda. But Christine Milne’s recent efforts to chase the farming vote appeared to deliver little, if any, electoral dividend. To the extent that the energy expended may have come at the expense of focus on its more reliable supporter base, the efforts may even have been counterproductive. All the same, to do nothing would be to condemn the party to a supporter base unlikely to grow much beyond 10 to 15 per cent.

The Greens’ performance in last month’s federal election, following a high-profile power-sharing arrangement with Labor, encapsulates the second challenge the party faces. To what extent should the Greens seek an active role in government? Milne is among those who have suggested that their role in the hung parliament may have adversely affected the party’s vote.

This is not the first time the Greens have experienced setbacks after periods in minority government. In Tasmania, support for the party fell in elections immediately succeeding minority Labor and Liberal state governments; and in the same state, where the Greens currently have their only ministry in the country, the party’s vote plummeted by 8 per cent at the federal election. At the recent ACT election, the Green vote slumped following a power-sharing arrangement with Labor.

Although minority government allowed the Greens to achieve some of their policy objectives, their relationship with the Gillard government was portrayed as a case of “the Green tail wagging the Labor dog,” with the party cast as extremist and power-hungry by its opponents in the parliament and the media. While attempts to pursue its policy aims were often met with intense resistance, a more passive approach would have alienated those supporters who expected their party to make the most of the opportunity.

While many Green supporters will be disappointed at their party’s loss of the balance of power in the Senate, it may well prove to be a blessing in disguise. Working with John Howard’s Coalition government certainly proved fraught for the Democrats: any cooperation with the government alienated their progressive supporters, but a more obstructionist route drew ire from those who wanted the party to moderate rather than frustrate the agenda of the government of the day. Ultimately, the Democrats’ controversial support for the goods and services tax brought these tensions to a head in a spectacular fashion.

During those years, the Greens played a very different role under the stewardship of Bob Brown. Brown’s strong criticism of the Howard government’s immigration regime, in particular, saw him emerge as the prime minister’s chief ideological opponent, a role that proved attractive to Labor voters disillusioned with their party’s capitulation to Howard. The loss of the balance of power from July next year will allow the Greens to return to the Brown model and enjoy an advantage the Democrats never had – the chance to distance themselves from a government with an agenda antithetical to that of their base.

In the short term, however, the party will have to adjust to an environment in which it must compete for relevance within a much more crowded Senate after June 2014. But with a reduced administrative and legislative burden, Greens senators will be able to devote more time to campaigning and media work. And despite the rise of Clive Palmer’s United Party and a range of micro-parties, the Greens’ role on the left of Australian politics is still largely uncontested. Indeed, the only serious competition has come from the Sex Party and the WikiLeaks Party, and while the former failed to make much of a dent at the last two elections, the latter was almost dead on arrival.

If the Greens are anything like their counterparts in other established democracies, they will prove to be incredibly resilient. In spite of its recent setback at the polls, the party is a more or less settled fixture on the political landscape. It has representatives across all levels of government; it has a stable and institutionalised party structure, essential for campaigning and for supporting the work of the parliamentary party. The Greens may have had a difficult election, with potentially more challenges to come, but they are nowhere close to political extinction. •

Wrestling with evil might have less value than exploring the interplay of humanity’s crimes, follies and tragedies, writes R.J.B. Bosworth 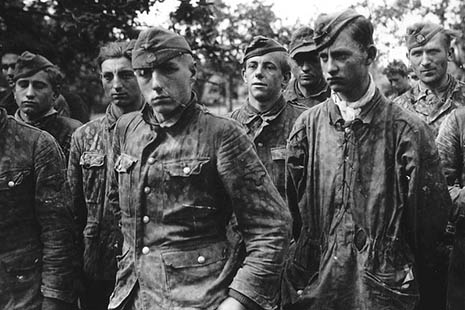