Who did he think he was? 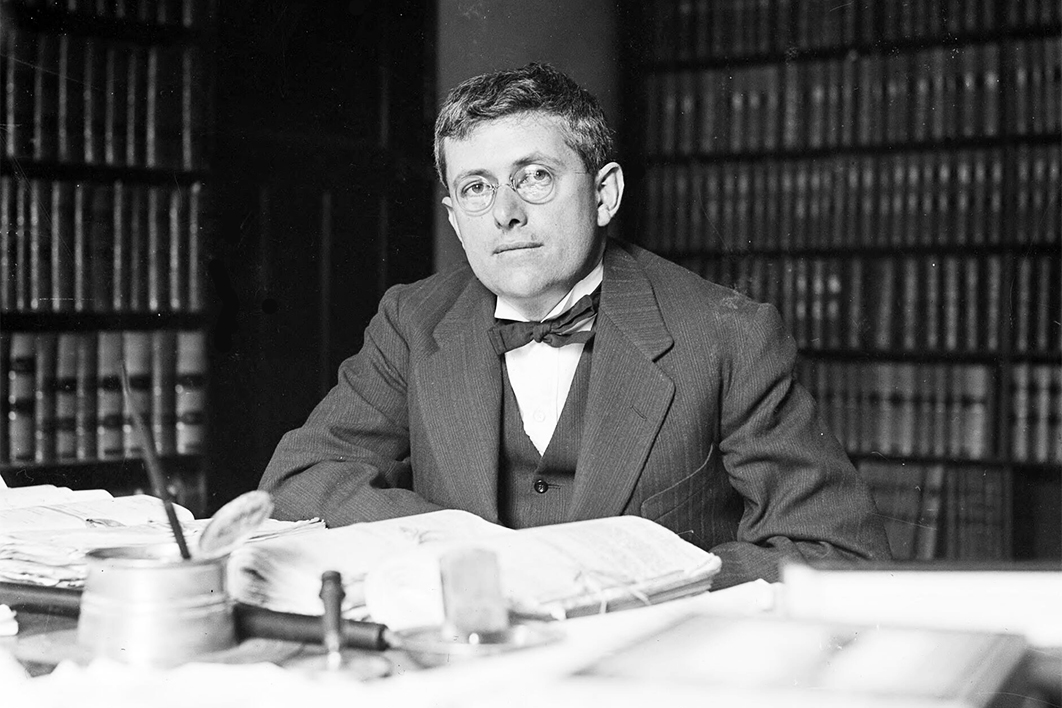 If there remains a dominant popular memory of H.V. Evatt, it is of the moment when, as leader of a fracturing Labor Party that would soon split, he tried to regain the political initiative. In the House of Representatives in October 1955, he accused prime minister Robert Menzies of using the defection of Soviet diplomat Vladimir Petrov to damage Labor. As proof he read from a letter he had solicited from Moscow’s foreign minister, Vyacheslav Molotov, denying that the Soviets were committing espionage in Australia. The gusts of laughter that greeted this announcement spread far beyond the audience in the House that night: the speech has since, and often, been cited as an example of Evatt’s foolishness, naive faith in legal procedure, and even mental instability.

As the playwright Luigi Pirandello once wrote, it is a cruel injustice to pin any life perpetually to one moment and judge it there. That sentiment is no doubt shared by those who have spilled ink over Evatt: the authors of four full-length biographies, an insider portrait and a host of books in which Evatt is a key figure.

One reason for these repeated attempts to portray Evatt is his complexity and contradictions; another is the extraordinary breadth of his life and career. He had a shining period at the NSW bar and a stint in NSW state politics, and was appointed to the High Court at a precociously young age. There, amid some 400 judgements, he wrote books about the reserve powers, the Rum Rebellion, and William Holman. Then he entered federal politics, made himself a significant player at the United Nations, and rose to the leadership of the Labor Party after the death of Ben Chifley. And finally, after losing three elections, he accepted an ignominious appointment to the NSW Supreme Court.

Most writers have understandably focused their attention on the later parts of Evatt’s career, with the result that his decade at the High Court has been left largely untraversed. In The Brilliant Boy, Gideon Haigh leads us through these uplands, and makes a persuasive and elegant case for the significance of one particular moment in Evatt’s career — the judgement he delivered in Chester v Waverley Council.

Evatt is one of two titular “brilliant” boys of this entwined biography and legal history: immensely intelligent, determined, and ambitious in every sphere. Haigh attributes these traits to the influence of his mother Jeanie, who instilled in her son a belief that he could do better than anyone else. What followed certainly suggests that he could: he won a swag of prizes at school and university, took first-class honours in English, philosophy and mathematics, and then veered into law, where he “cut a swathe” through the Sydney bar and crossed paths with Robert Menzies, then at the Melbourne bar. In chapters that teem with colour and are flecked with a light wit, Haigh recounts Evatt’s rise through the 1920s: how he became a High Court habitué then went into state politics, where close experience of the domineering premier, Jack Lang, left him disenchanted and made him refocus on his legal career.

Almost immediately after his return to the law, aged thirty-six, Evatt was appointed to the High Court, where his resolve, liberalism and omnivorous mind would rankle his crustier colleagues. Haigh’s discussion of the machinations of the court and the interplay of its characters is wonderfully sharp, setting them in the context of wider clashes between capital and labour, the Commonwealth and the states, and non-Labor governments and left-wing radicals.

Against this background Haigh sketches Evatt the intellectual: the man who read voraciously, hung around artists’ studios and galleries, bought a Modigliani for his wall, “slipped from Bench to desk” to write histories, and was bursting with opinions he couldn’t keep to himself. While on a visit to the United States in 1938, he wrote to president Franklin D. Roosevelt to offer advice on filling a Supreme Court vacancy.

“Who did Evatt think he was?” asks Haigh rhetorically. In the words of one of Evatt’s near contemporaries, the literary critic Nettie Palmer, he was a man certain that he could do what he wanted.

But this was not wholly true. “Evatt’s life would be marked every bit as deeply by what he could not do,” writes Haigh, pointing to the first world war, when Evatt was rejected for service because of his astigmatism only to see two of his younger brothers enlist and never return. On Haigh’s reckoning, this loss, and the immense toll it took on his mother, was a trauma Evatt could never forget.

Then there is another “brilliant boy.” In September 1937, workers for Waverley Council excavated a deep trench in the middle of a thoroughfare and, downing tools for the weekend, left it barricaded only by a few planks, an upturned wheelbarrow and a pile of sand. Overnight rain filled the trench with water and the next day children in the neighbourhood began challenging one other to jump over it. Max Chester, a seven-year-old child of Polish-Jewish immigrants only two years settled in Australia, fell into the trench and drowned. His body was discovered six hours later in the presence of his mother, Golda.

Such an incident was not atypical. One of the most startling parts of The Brilliant Boy is its evocation of a world far more brutal and callous than our own. Haigh notes a litany of deaths on unsafe building sites and points out that Sydney trains at this time travelled with their doors open, regularly leading to horrific accidents in which people were hurled out by the jolt of a carriage on a warped track. There seemed little impetus for change, even if it would have been simple and cheap to effect. Even Max Chester’s death was blithely accepted by the Waverley Council: work continued on the trench without a single change in work practices — even after another boy fell into the trench a week later.

These dangerous practices reflected a profound lack of sympathy and humanity within the legal system. Judges would attribute recklessness to the victims, downplay their injuries, and worry instead that the “floodgates” might be opened if cases like Chester v Waverley Council were to succeed. As Haigh puts it, the overriding view on the bench was that the world “was a harsh place in which unfortunate events happened for which it was frivolous to seek redress.” Thus Golda Chester’s frustrations when, with the aid of solicitor and state politician Abe Landa, she sought compensation.

With an eye for the salient point and the humanising detail, Haigh teases out the links between cases heard in local and overseas courts to detail how this state of affairs had been reached and how, in the years immediately before Chester v Waverley Council reached the High Court, the law had begun to evolve. He shows how a smattering of rulings became hurdles for Golda Chester: how judges insisted that mental injury be accompanied by physical injury; and how Privy Council rulings bound Australian courts but not British ones. Then he shows the shifting ground: how, in the wake of the first world war, the notion of traumatic injury became more accepted; how a case centred on a snail in a bottle of ginger beer established the law of negligence; and how a case over woollen underwear established in Australia a liability standard for negligence.

But those shifts were not enough. By the time Chester v Waverley Council came before the High Court, the matter had been winnowed down, stripped of the very real human tragedy — namely, Max’s death — and recentred on whether the council had a duty of care to his bereaved mother. A witness who had seen Max Chester fall into the trench was not called. The judges worked from appeal books. The verdict was decided almost immediately.

Evatt disagreed. In what becomes the raison d’être for this entwining of life and case, Haigh writes that Evatt performed an act of radical empathy: “He, an honoured Australian judge, tries to enter into the mind of Golda Chester, a penniless Polish-Jewish woman, to understand the ‘nervous shock’ occasioned by her agitated search and horrifying discovery.” Evatt’s communing with Chester was prompted by his knowledge of her predicament. “Twice Jeanie Evatt watched sons disappear into danger; twice she endured the long wait for dreadful news that was always a possible outcome. Golda’s wait had been shorter and sharper but no less helpless.” Thus Evatt’s terse refutation of the verdict of the NSW Supreme Court chief justice Sir Frederick Jordan: “She was not ‘looking for the body of a child,’” writes Evatt. “She was looking for her child.” (As Haigh notes, “These are devastating lines.”)

Moreover, Evatt argued for the kind of imaginative understanding that he had just deployed: that the council should have foreseen that the trench, inadequately guarded and filled with water, would be an attractive but dangerous place for children, and that any parent who came there and discovered his or her child had died would incur great shock and distress. “If the present defendant had ‘directed his mind’ at all to the possible consequences of his primary default, would he not have foreseen the likelihood of injury being suffered, not perhaps in the precise way in which it was suffered, but in some such way? If so, he owed a duty to the person who suffered.”

Evatt stepped down from the High Court to go into federal politics soon after Chester v Waverley Council. Great highs and lows awaited him there. But he remained aware of the significance of his dissent, and for years afterward nursed the hope and belief that it would be vindicated, to the point that he approached a young Murray Gleeson to write an article doing so.

An embarrassed Gleeson declined, but time would eventually prove Evatt right. In this compelling and incisive account Gideon Haigh delivers what Evatt sought; moreover, he does Evatt a more important service by shifting our attention from that calamitous moment in 1955 to a time when, at the height of his powers, he sought to bend the law towards justice. •