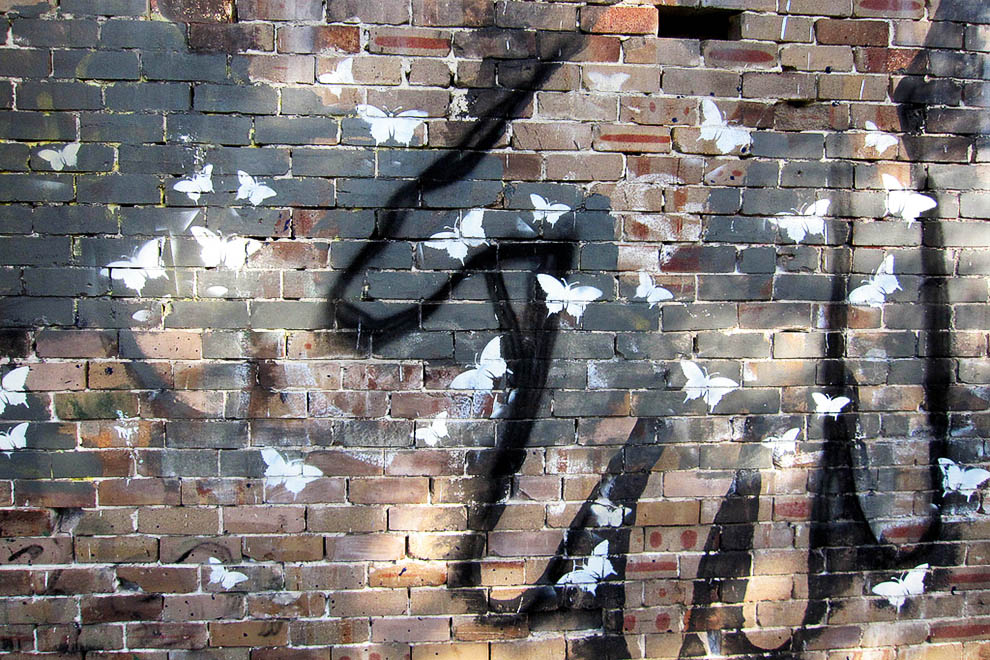 “I wanted to know how and why historical legacies continued to assign such weighted meaning to black/white lines in the everyday,” writes Bronwyn Carlson. Photo of Redfern wall painting by baddogwhiskas/Flickr

For as long as I can remember, my parents never missed an opportunity to accuse each other’s family of having been “touched by the tar brush.” My father would pass comments like, “It’s your mother’s side that are the Abos.” My mother would in turn accuse my father of being the “guilty” one.

I learned a number of things from these everyday expressions of domestic tension. One was that “being Aboriginal” must not be a good thing. Another was that any reference to being Aboriginal was an insult. But I also learned at an early age that the colour of a person’s skin carried meaning – it signified something. For me, knowing we were “touched by the tar brush” meant we were not white. But in that era, not being recognisably black also meant I was not Aboriginal. This was an early source of anxiety about who I was and how I was to represent myself.

I remember as a young girl being asked if I was Aboriginal and replying that my maternal grandmother was. My answer was based on my lived understanding of Aboriginality as somehow signified by skin colour or “look.” Nana was “dark” and therefore could be called Aboriginal. But could I? All I knew was that our family were “part-Aboriginal.” It was not until I was much older that I was able to establish with certainty the facts of my mother’s ancestry from a long line of Aboriginal women who originated in South Australia. In the interim years, the way our Aboriginality was not discussed at home had as much effect on me as did the way it was used as a tool of insult.

But it was not just domestic tensions that produced confusion about what it meant to be “part-Aboriginal.” My childhood in the 1960s and 1970s was overlaid by a range of commentaries about what being Aboriginal signified out in the world beyond our home, and these infiltrated my self-awareness. I cannot recall any positive message about being Aboriginal. In school, the media and everyday interactions I was faced with frequent assertions that “Aboriginal people” were a passive lot who lived in the bush and were dirty. We were bombarded with images of semi-naked children with fly-infested noses. For the most part, I was positioned to see Aboriginal people as wanting and in need of help.

In my childhood mind, one exception to this negativity was the TV show Boney, in which “full-blood” Aboriginal people were portrayed as mystical “beings” and were to be feared as sorcerers. Little did I know that the main Aboriginal character was played by a white person covered in black paint. Nevertheless, some of these representations connected with my own experiences and reflected some things that I already knew. “Pointing the bone” was a common saying in my childhood, as was a fear of the “Kadachi Man,” who wore feather boots and couldn’t be heard approaching. It was common for our parents to caution my brother, sisters and me that if we didn’t behave the Kadachi Man would get us.

Throughout my childhood, our family moved regularly from town to town, and from state to state. I attended schools in Geelong, Victoria; in Oodnadatta, South Australia; in Katherine, Northern Territory; and still others throughout the Illawarra in New South Wales. Later, I came to understand that our frequent moves, which my mother called “moonlight flits,” were about having outstayed our welcome. In the middle of the night we would pack our possessions into an old Falcon and depart on another “journey.” For a young child, this developed into an unsettling feeling of not belonging or being welcome anywhere.

Then, when I was seven years old, my father took us to New Zealand, which was the mother of all moonlight flits. All I knew about New Zealand was what I had learned at school – that Māori people were scary natives who ate people and, like savages, would kill without cause. Needless to say, my sisters and I were petrified by the time the plane landed in New Zealand, and really concerned as to whether we would be safe living in grass huts. Although I came to understand how and why Indigenous people are portrayed as primitive savages, at the age of seven it was a terrifying experience, such was the power of those unmediated images on my young mind.

Life in New Zealand mirrored our lives in Australia. “Relocations” were frequent. Drunken parties were commonplace, as were fights and arguments. We were no strangers to poverty, but as young children we didn’t understand that we were poor or that we had nothing; that was just the way it was. I do remember my mother making the most out of what we had, which was a lot of empty wooden beer crates. In our lounge room we had beer crates covered in old blankets for seats. In our bedrooms we had mattresses on beer crates, and to store our clothes we had more beer crates. My sisters and I used to entertain ourselves with beer bottle tops, building toy houses, and making up all sorts of games.

After two years of living in New Zealand, my father returned to Australia. If we thought we had nothing until then, we were mistaken. He left us with no money and no possessions, and soon we were served an eviction notice. As Australians, we were not entitled to government assistance in New Zealand, so we lived on handouts from church groups and other organisations, and learned over time that it was good to avoid those to whom we owed money.

As we struggled from day to day, I realised that not everyone lived like we did, and I began to resent that fact. My younger sister and I began rebelling and soon ran into trouble with the police, eventually earning a reputation for being “uncontrollable.” I spent some time in Bollard Girls’ Home in New Zealand and, at the age of fifteen, I was deported to Australia with my younger sister in tow. As part of our punishment the court ordered us to live in Australia with our father and not return to New Zealand for a period of twelve months.

When we arrived in Katherine in the Northern Territory, I felt we were neither welcomed nor wanted by my father and his new family. Further rebellious behaviour was the inevitable result. I remember getting into trouble for hanging out too much with the “blacks.” Katherine in the 1980s was a racist town. I recall once overhearing a conversation between some men on the street who were commenting that if you ran over a black, you should then reverse over them to ensure they were dead as it would mean less paperwork. That way, they also contended, the death could more easily be attributed to the victim’s being drunk. In those days most people kept shotguns with salt pellets to shoot at the blacks if they came onto their property. At night, it was common for the local white teenagers to drive their Mini Mokes through the blacks’ camp yelling abuse, just for a laugh.

It was not long before I was sent to Wollongong to live with my Aunty. I loved Wollongong because my Nana also lived there. Although I had become a very angry person, I loved being near my Nana and I cherished those times with her. Her house was the only place I recognised as a home, and she was the only stable element in my life growing up. After I turned sixteen I returned to live with my mother in New Zealand; Nana died not long after.

Social studies also helped me begin to uncover some of the mystery of my own ambiguous status. I learned about blood quantum as a measure of differences between “full-blood,” “half-caste,” “part-Māori” and so forth. In New Zealand, “half-caste” people were positioned both outside the Māori community and outside the white community, just as we were in Australia. Those of us who were “touched by the tar brush” seemed to be quarantined, perceived as not being of any place or any group. These ideas filled my head. I came to believe that as a “half-caste” or less, a person was not entitled to be considered Māori or, in my case, Aboriginal. I recall watching a television show that showed Māori protesting, and someone commented that “they” (Māori) were as white as “us” – “they cannot be Indigenous.”

Now, as an adult, I became interested in exploring the firmly planted, but rarely discussed, family assertion of being “touched by the tar brush.” I spoke with my relatives, including an old great-aunt, my Nana’s sister, who has since passed away. I was told stories of Nana’s mother, who was commonly referred to as Kit. Another aunt confirmed that indeed Nana Kit was Aboriginal, but added that such things were not really spoken of in the family.

So, despite open confirmation of this knowledge, not all the family accepted that they were of Aboriginal descent. Even today, there are members of our extended family who still see Aboriginality as singularly a factor of colour or looks, and therefore don’t see themselves as being Aboriginal, or don’t feel confident with publicly identifying as Aboriginal. My cousin commented that I was lucky my hair and eyes are dark because that made it easier for me to identify as Aboriginal. I understand this as I was also conditioned to think that Aboriginality was only afforded to those who were dark-skinned or “looked” Aboriginal. I also understand that in many ways my generation had it far easier than my nana’s or aunties’ difficult circumstances, when it came to identifying, accepting and acknowledging our Aboriginal lineage. Historical circumstances had conditioned previous generations of our family to avoid the attention of the authorities.

I recognised that my search for information needed to extend past the family level. I needed to understand how and why I was understood as not being Aboriginal enough. I wanted to know how and why historical legacies continued to assign such weighted meaning to black/white lines in the everyday, given the history of dispossession and the subsequent administration of Aboriginal lives in Australia. I wanted to know why so many of us were suspended in the land of not belonging. •

Bronwyn Carlson is an Associate Professor of Indigenous Studies at the University of Wollongong. Her book The Politics of Identity: Who Counts as Aboriginal Today?, from which this article is adapted, is published by Aboriginal Studies Press.

Books & Arts If not, try singing it Zora Simic 11 June 2021 Sinéad O’Connor eschews the notion that art can be “too personal”

Having started life as a tweet, IndigenousX helped reorient the constitutional recognition debate

“I wasn’t trying to stack the deck one way or the other,” says IndigenousX founder Luke Pearson. Charandev Singh 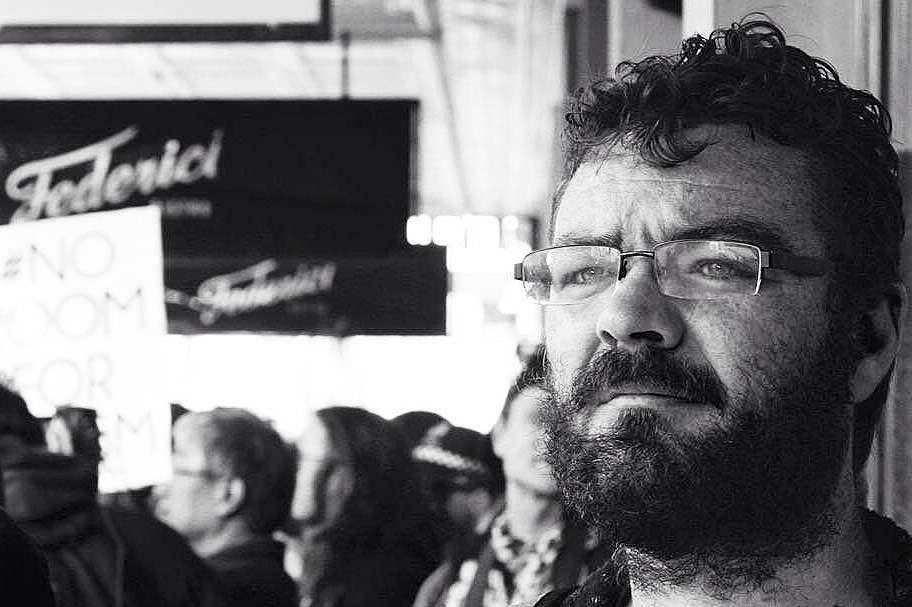 “I wasn’t trying to stack the deck one way or the other,” says IndigenousX founder Luke Pearson. Charandev Singh