Why does Truth come third? 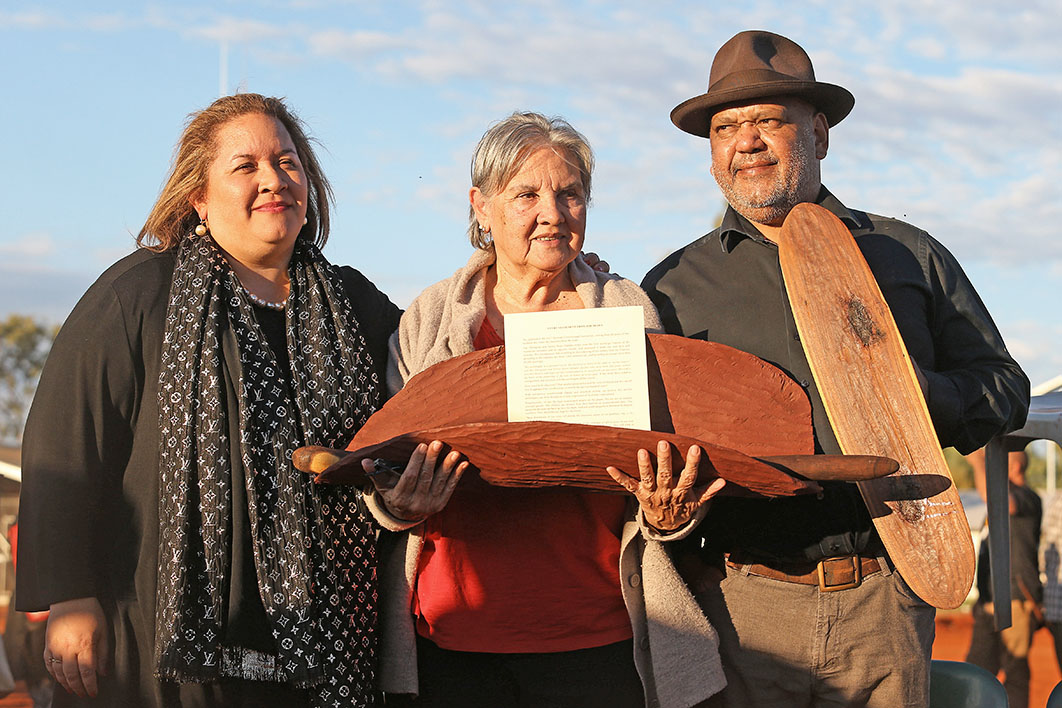 Voice and Treaty first: Megan Davis (left), Pat Anderson and Noel Pearson, with the Uluru Statement from the Heart, at the closing ceremony of the Indigenous Constitutional Convention in June 2019. James Croucher/Newspix

When the Australian Historical Association met for its annual conference in the winter of 2019, the session that drew most delegates was entitled “Voice, Treaty, Truth: Australia’s Unfinished Business.” It featured three young Indigenous people speaking on behalf of the Uluru Statement from the Heart: unionist Thomas Mayor, lawyer Teela Reid and scholar Eddie Synot. Their passion and eloquence generated a charge in the hall that afternoon, straightening normally slumped backs and quietening usually gossipy cohorts.

Many historians — Indigenous and non-Indigenous — had already sensed the momentousness of the Referendum Council’s work behind the Uluru Statement. They were primarily historians of Australia who could recognise, via their teaching or their research, how distinct it was from earlier discussions of constitutional reform. But few had heard a younger generation of Indigenous leaders articulate the statement’s meaning for themselves or provide insight into how it came into being.

At some point, one of the speakers mentioned having asked UNSW law professor Megan Davis for advice on how to address a bunch of historians. Davis, one of the key referendum councillors and the first to read out the Statement at Uluru on 26 May 2017, suggested that they ask us what it means for the Uluru Statement to have placed Truth third in its sequence for reform, Voice, Treaty, Truth.

Davis’s question alludes to the longstanding connection made in this country between ideas of truth and the business of history. If the Voice part of the Uluru sequence invokes the realm of politics and the Treaty part conjures the world of law, then the Truth part aligns most closely with the domain of history. In Australia, history practitioners include far more than just academics. They encompass museum curators, journalists, teachers, filmmakers and podcasters. They also include artists, activists, policy advisers, heritage consultants and parents.

One of the truths that most history practitioners know is that in other places and times, truth-telling about the past has been seen as a “precondition of healing.” The famous truth commissions of South Africa, Rwanda, Canada and elsewhere are examples of this conviction in institutionalised form. Those invested in history-work might reasonably assume, therefore, that Truth would come before Voice and certainly before Treaty. Yet in the Uluru Statement it is a deliberate third.

Clearly, the positioning in no way reflects a lack of interest in history among participants in the Referendum Council’s work. Its final report is replete with discussions and references to history. It opens with a historical summary of the deep and colonial past of First Nations people in Australia. Later, it offers an expansion of that history, peppered with quotations from the participants’ Dialogue Sessions. “Australia must acknowledge its history, its true history. Not Captain Cook,” said one participant. “Government needs to be told the truth of how people got to there,” added another.

“The need for the truth to be told as part of the process of reform emerged from many of the Dialogues,” the report concludes. “The Dialogues emphasised that the true history of colonisation must be told: the genocides, the massacres, the wars and the ongoing injustices and discrimination. This truth also needed to include the stories of how First Nations Peoples have contributed to protecting and building this country.”

Much of the wariness about the place of truth reflects what happens when states get involved in truth-telling. “Beware the state seeking ‘truth,’” Davis tweeted in March this year. “A lot of lawyers, historians will be handsomely paid. Non-Indigenous academics will do well. Govt avoids structural reform cos *wait for truth*.” Other Indigenous leaders have also commented that truth-telling in an official context can become a “can-kicking exercise.”

Even when state-sought truths do come out, the responses can be wrenchingly slow or simply useless. When Australia commemorated the thirtieth anniversary of the truth-seeking royal commission into Aboriginal deaths in custody last month, more than 120 of its recommendations had still to be implemented and 455 more Indigenous lives had been lost.

It’s not that we lack truths about the Indigenous presence in Australian history: as Henry Reynolds declared as early as 1984, the “Great Australian Silence” has been well and truly broken. That presence is now heard in school curricula, in ceremonial events, and in a deep and extensive scholarship — each advance notably inspired by Indigenous leaders. Some have suggested that it’s more a question of forgetfulness. Tom Griffiths recently lamented that historical practitioners may well recover or facilitate knowledge about First Nations, but their efforts get buried under the “endemic forgetfulness of the dominant culture.”

The problem seems rather to be that Australians know and forget at the same time. We shatter silences and then build them up again. We fill gaps then re-gouge them. Nothing else can explain, for instance, how we admit that 26 January 1788 was not a “flash” day but insist on celebrating it anyway. Or how we recognise that Aboriginal people were placed in chains but think there was no slavery in Australia. Or how we acknowledge frontier wars but refuse to integrate them into the Australian War Memorial.

In some reply to this hectic vacillation, the Referendum Council’s final report called for the creation of a Makarrata Commission, charged with not only “supervising agreement-making” but also “a process of local and regional truth-telling.” The council didn’t specify the commission’s contours because such a task “does not fall within our terms of reference.” But the sequencing of the Uluru Statement’s reforms suggests it believes that a fresh approach to truth can only emerge after Indigenous people have secured a greater level of political assurance.

One meaning of the Yolngu word Makarrata is, as Merrikiyawuy Ganambarr-Stubbs explains, “a spear penetrating, usually the thigh, of a person that has done wrong… to settle them down.” It also contains the more commonly understood meaning of the agreement-making and truth-telling process that may then occur. In the Uluru Statement’s sequencing, the enshrinement of Voice may well be the spearing moment. Australians need to stop in their tracks — listen to this voice — before the truths of their past finally stick.

Where does that leave history practitioners? It certainly doesn’t mean easing up on the research that we do. We should continue to find out, deepen and communicate the truth about Indigenous pasts, so long as our practice respects the evolving desires, protocols and differences of descendants today.

But we need to discuss those truths in ways that take account of the chaotic flux between knowing and forgetting in Australian public life. The first move might be to shore up the knowing. This means threading Indigenous presence into every aspect of Australia’s past. It should not appear only when discussing massacres, reservations, or land rights struggles. It should also animate our narratives of suffrage, sexuality, migration, music, transport, political economy, foreign policy and intimate family.

The second move is to deal with the forgetting. We can do more to explain why historical truths are so readily disregarded in Australia. We can show more explicitly how the dispossessive events we recount have shaped the very ways that we remember them — or don’t remember them — today. Assimilationist practices of the twentieth century eroded the languages by which memories could survive into the future. Humanitarian practices of the nineteenth century produced the current myth that liberalism is always progressive. Keeping one eye always on history’s effect in the present makes our work more powerful and more useful.

Finally, history practitioners of all stripes should step up, when asked, to help serve the local versions of Makarrata as they emerge. On current behaviour, most will do so enthusiastically. Many educators, planners, creatives and private citizens already support existing state or regional truth-telling initiatives. Legal scholar Gabrielle Appleby, writing with Davis, envisages that local Makarrata sessions will occur “in conjunction with local councils, local history societies, or other local community groups.” No doubt any overarching national Makarrata organisation will require the same.

Nearly forty years ago, the too-often-forgotten Aboriginal scholar Eric Willmot suggested that if Australia had not by 1988 made some gesture towards what he called a “covenant” with First Nations, the country would be “in trouble.” He strongly implied that such failure would be tied to its shaky sense of history. In 2021, Australia still lacks a covenant. Its histories are louder, bigger and frankly better than they were in the 1980s. But they are yet to overcome their shaky hold on the public consciousness. History practitioners can help by continuing to build knowledge through their research. They can help by explaining how forgetfulness is built into the very dispossession that their work describes. And they can help by paving new paths to truth, once Voice and Treaty are already on the table. •

Kate Fullagar is Professor of History at the Institute for Humanities and Social Sciences, Australian Catholic University, where she specialises in the history of the eighteenth-century world, particularly the British Empire and the many indigenous societies it encountered. Her latest book is The Warrior, the Voyager, and the Artist: Three Lives in an Age of Empire.