Will the price be right?

With the date for a carbon price mechanism now set, Fergus Green goes in search of the missing philosophy behind Australian climate policy 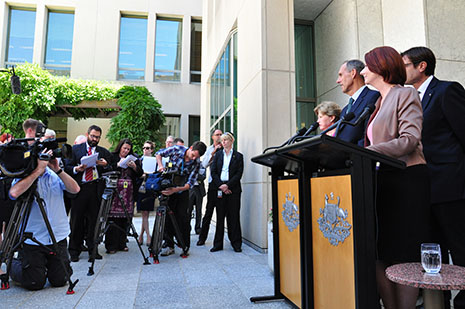 AFTER only four meetings of the Multi-Party Climate Change Committee, and well before most industry groups could finishing dusting off their talking points from the 2009 fear campaign against the ill-fated Carbon Pollution Reduction Scheme, Labor, the Greens and key independents yesterday announced their agreement on the “broad architecture” for an Australian carbon pricing mechanism. Australia looks set, finally, to establish that most elusive of prizes in Australian climate politics: a carbon price.

But a fundamental question remains: will the price be right?

The striking thing about the Australian climate debate is that a carbon price itself has become the beginning and end of climate policy. It's striking because a carbon price is merely a tool, a way of getting from “a” to “b.” Its function is to send a market signal about which type of power plants to invest in, which forms of transport to take and how best to use our land. But just what sort of signal do we want our carbon price to send? What do we want “b” to look like?

The Greens have a fairly clear idea, but for all its committee-convening and report-commissioning, the Gillard government has yet to present a coherent and compelling philosophical rationale for its climate policy generally and for carbon pricing in particular.

Australians seldom talk about philosophy, but it is inextricable from public policy and it matters deeply in the case of climate change. The public purpose that a technocratic policy mechanism like a carbon price is designed to serve will make the difference between whether our energy future lies down a coal mine or harnessing the sun; whether we will forever drive petrol-guzzling cars or enjoy efficient forms of public and private transport; whether we log our forests bare or protect and restore them; and whether our nation helps or hinders the global effort to avert catastrophic climate change.

Establishing the philosophy for Australian climate policy used to be relatively easy. By consigning the moral dimension of climate action (averting dangerous climate change) to the international sphere, conveniently assuming that it could be taken care of by way of a treaty imposing targets on countries that would “add up” to an acceptable outcome for the climate, Australian climate policy elites came primarily to be concerned with efficiency – an amoral concept. Until relatively recently, there existed a bipartisan consensus that the purpose of Australian climate policy was simply to “meet our target efficiently” – that is, at the lowest possible cost, by way of an emissions trading scheme, or ETS.

But this “treaties, targets and trading” approach has been discredited by the failure of the Kyoto Protocol, the effective collapse of negotiations towards a successor treaty in Copenhagen and the gaping “multi-gigatonne gap” between scientifically credible emissions reductions and the weak targets currently being discussed in meandering international talks. As this intellectual edifice has crumbled, it has exposed the weakness of the Australian philosophy: we had been designing our domestic climate policy (including numerous iterations of the Carbon Pollution Reduction Scheme) to slot neatly into a tight system of global morality that simply did not exist.

It is against this chaotic background that Prime Minister Gillard and her colleagues have set about the task of eliciting fresh support for a carbon price. With apparent determination to avoid the morally infused rhetoric of Kevin Rudd, they have set their sights much lower than averting climate catastrophe, spruiking instead a case based on the opportunities for green (or, at least, greener) economic growth. A carbon price, so the argument goes, will make renewable energy more competitive, fuelling investment, job creation and export earnings in the industries of the twenty-first century.

Building competitive, low-carbon industries in Australia is a worthy goal of national climate policy and one that makes for a more compelling sales pitch than “meeting our target efficiently.” But it also makes for fuzzier philosophy, rendering it liable to abuse.

First, the “green economic opportunity” case for climate policy is hard to reduce to philosophical principles. Which industries do we want to grow, by how much and when? These are important questions that need to be pondered, but any answers inevitably prove difficult to justify by reference to economics alone. And in a political scrap over their relative economic value to the nation, you can bet that the clean-tech champions of tomorrow will be outgunned by the fossilised behemoths of today, as they were during “stakeholder consultations” on Kevin Rudd’s scheme. Unless we have a clear vision for the industrial composition of our future economy from which to design our climate policy, it will be difficult to know whether the carbon price is right.

Second, and more importantly, the more that “economic opportunity” is allowed to displace concerns about ethics, justice, values and science in the search for a philosophy for Australian climate policy, the more we risk unhinging that policy from concerns about climate change itself and our contribution to it. Much green growth could easily occur amid even greater brown growth if our concern is only to boost the former, not curtail the latter. What good are a few more wind farms for the climate if we push ahead with plans to double our coal exports in the next ten to fifteen years? Seriously trimming our carbon-obese society will present immense economic opportunities, but it will also require tough decisions that cost some industries and communities dearly in the shorter term. A wholly opportunistic approach to climate policy risks conditioning Australians to an easy-being-green mentality that would leave us ill-prepared for the difficult trade-offs of a climate-changed world – and impotent to demand them from others.

Labor’s rhetoric about green opportunities also risks ringing hollow. Will levying a carbon price “drive another sweeping technological revolution like information technology did in the 1980s and 90s,” as Gillard claimed in a recent speech? Both theory and practice suggest that a carbon price, though helpful, will not on its own be capable of sparking such a transformation.

According to economic theory, even a high and stable carbon price will be insufficient to encourage the sort of large-scale technological innovation – in electricity generation and transmission systems, for example – required to meet scientifically credible emissions reduction targets. Because of market barriers to large-scale private investment in technology research and development and network infrastructure (like “smart” electricity grids), governments must invest in such “public goods” through targeted policies, including direct grants, loan guarantees and R&D tax credits. A carbon price can at best assist more mature, commercially available clean technologies by raising the price of incumbent, carbon-intensive alternatives.

In practice, existing carbon pricing regimes in other countries have had minimal impact on the development and diffusion even of mature low-carbon technologies, let alone new ones. The European ETS — the world’s largest carbon market — with its historically weak emissions caps and brown-industry-friendly loopholes, has yielded low and volatile carbon prices, making it a poor catalyst of low-carbon industrial development. An EU-wide renewable energy target (divided into individual country targets) and policy mechanisms providing direct support for clean-tech industries have therefore been necessary to stimulate the desired local “green growth.” Germany, for example, like many European countries, has implemented a system of direct payments to renewable energy producers, known as feed-in tariffs, which spurred a five-fold increase in the share of German electricity consumption from renewable sources between 1991 and 2009 and fostered a thriving German renewable energy sector.

NONE of this should come as a surprise: the point of an ETS is precisely to meet an emissions target at the lowest cost; developing new industries and technologies amid competition from incumbent alternatives is messy and costly. Sparking an Australian clean technology revolution will require sustained and sophisticated investment in innovation, infrastructure and technology, along with a smoothly rising — and eventually very high — carbon price, free of the loopholes and carve-outs that would undermine its transformative potential.

If recent signals are anything to go by, the Gillard government looks intent on pushing for the complete opposite. In February, Gillard referred to the industry compensation arrangements crafted for the Carbon Pollution Reduction Scheme, which would have seen more than $20 billion of taxpayers’ money doled out to Australia’s biggest polluting industries, as “good work” that should inform the design of the new scheme. Simultaneously, Labor tried to scrap funding for large-scale solar power plants – the sort of strategic investment in breakthrough energy technologies that will be necessary if we are to have any hope of sparking a “sweeping technological revolution” – on the spurious basis that such policies will be redundant when we have a carbon price.

While yesterday’s announcement that the new scheme would start as an annually rising fixed price is a step in the right direction, moving to an ETS after three to five years could prove damaging to the development of low-carbon industries in the absence of an effective floor price to provide certainty for investors in those industries (a lesson the Europeans are learning slowly).

If we’re truly serious about both green industrial development and deep emissions cuts then the terms of the political debate now need to shift well beyond whether “to have or not to have” a carbon price and mere platitudes about green growth. In the few months before the carbon price legislation is settled, environmental groups and progressive business voices need to articulate a clear and coherent philosophy for Australian climate policy in a post-Copenhagen world.

Only with such clarity of purpose can one establish firm principles from which to argue persuasively for particular design features of the new carbon pricing mechanism (let alone for the further policy measures that will be needed to develop clean technologies and industries). Without such a philosophy, the all important details of the carbon price will be resolved in backroom deals between politicians, bureaucrats and industry lobbyists, as happened with Labor’s previous scheme. If that occurs again, we’ll get a weak scheme that does little to reduce our emissions, let alone transform our industrial base.

If, on the other hand, we can bring these issues to the forefront of our public debate, we might be able to get not just a carbon price, but a carbon price that's right. •

Fergus Green is a lawyer and policy analyst specialising in climate change. He has published widely on Australian and international climate policy in both print and online media.